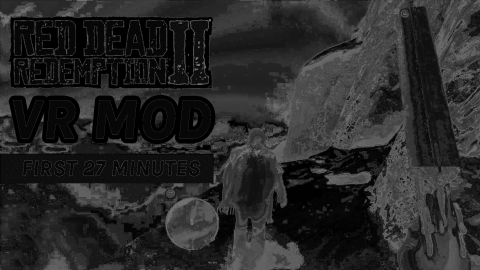 Developer Luke Ross is launching his early work on the mod via Patreon. Ross previously developed VR mods for No One Lives Forever 2 and, more recently, Grand Theft Auto V. The latter sits on our list of the best VR mods you can try today.

In its current state, this mod supports playing with a gamepad. You can play it in Red Dead’s first-person perspective, or even third-person.

We’ve recorded 30 minutes of gameplay from the mod above. Keep in mind this is a very early release and Ross intends to keep improving the support. His GTAV mod wasn’t in the best shape when it first launched, for example, but has since been updated to become a much more polished experience.

Even with the quirks, though, it’s really impressive to finally see Red Dead 2 running inside a PC VR headset. Climbing the mountains in the opening 30 minutes proved to be a genuinely scary experience and aiming is more intuitive with your head.

That said, be prepared for the usual VR mod issues. Sometimes control of the camera is taken from you, and there’s a fair amount of clipping. These sorts of things are to be expected for a fan-made port, of course. You can do yourself a favor and turn off the head bobbing in camera settings too.

You’ll of course need to own Red Dead Redemption 2 on PC (and a decent PC to boot) for this to work but Ross is also asking people to subscribe to his Patreon to support his work. For £8 a month you’ll get access to the new mod and future ones.

“I decided to take the plunge though, and about six months ago I stopped taking new contracts altogether with my main freelance developer activity,” the developer notes on his Patreon page. “Since then I’ve been working full time on this project, and if you guys are willing to support me it is my wish to keep doing so for the foreseeable future.”

Ross says possible future projects include Cyberpunk 2077 and Horizon: Zero Dawn among others. Don’t expect those for some time, though, as Red Dead 2 is likely to be the immediate focus for the future. Just over two years ago, we wrote about why the game really needs official VR support.