There’s always a danger in messing with something that is particularly well-loved. 7 Wonders has been a staple game at many gaming tables since its release in 2010, and for very good reason. Designed by Antoine Bauza, with gorgeous illustrations by Miguel Coimbra, that original game hit all the right marks, with complex and varied opportunities for strategy and card development, tremendous replayability, and the appealing theme of controlling and building one of the great civilizations of the ancient world.

Thankfully, rather than try and rework an already excellent experience, the new edition of 7 Wonders maintains everything that already worked, and simply offers a more attractive and playable experience that is easier to learn for new players. It’s a win all-around, and an easy recommendation for any gaming group. But what has changed? And is it worth a purchase if you already own the original?

What Has Stayed The Same?

7 Wonders is a card-drafting and resource management game about competing ancient civilizations. Each player strives to gather victory points for a variety of ventures, including building up a culture of science, establishing military might, or finding success as a trading superpower. And, of course, there’s the game’s name; you can gradually build up your civilization’s Wonder, from the Pyramids of Giza to the Colossus of Rhodes.

Conceptually, the game (in both its editions) hits a wonderful sweet spot between accessibility and strategic depth, with mechanics that are easy to learn, and a playtime of under an hour once you know the basics. As such, I’ve often found 7 Wonders acts as a uniting game that invites a broad array of players with differing levels of experience to the table.

While card drafting has had a variety of incarnations, 7 Wonders’ original release certainly helped to further popularize the concept, which sees much broader use today in a variety of board games. In brief, 7 Wonders demands that players pass individual hands of cards around the table, with each player pulling one card before passing the entire hand on, and then receiving another hand of cards with which you do the same. In this way, the resources and options presented in any given hand get spread around the table, and there’s always an intriguing choice between what you need, and denying your neighbor what they are chasing.

My favorite thing about 7 Wonders is how each playthrough inevitably feels so dramatically different from the last. That’s because of some very astute balance work on the part of the designer, but also because of the variety of winning strategies. The strategy you play in a given round can rarely be static or repeated verbatim. A winning approach one round may simply not meet the needs of a subsequent round, so you’re forced to think on your feet.

That’s because you’re always competing with your direct neighbors at the left and right of the table, thanks to the way trading and warfare is handled. While there’s one winner across the entire table, you’re regularly interacting with your direct neighbor, so it behooves you to pay close attention to their machinations, and respond accordingly. Thematically, I love the way this concept echoes the nature of conflict in these societies from thousands of years ago; everyone is forced to deal with their neighbor, but any one society might have a dearth of understanding or direct interaction with a nation much farther away.

Across three ages of play, each player gradually builds out a civilization focused on different technologies and capabilities. And just when things really start humming, the game accelerates to a final cycle of cards around the table, and it’s time to count up your score. On more than one occasion, players I’ve enjoyed the game with are ready to dive immediately back in to try again, no matter how their ancient society fared in the final standings.

The new edition of 7 Wonders isn’t a dramatic overhaul of systems or mechanics. Rather, think of it more as a sort of definitive edition of the core game, which tweaks balance and improves presentation in as many ways as it can, but without losing almost any of the original game’s essence or flow.

Gorgeous new cover art echoes the iconic appearance of the original illustration, but with a grander scope and central focal point on the Colossus statue. Open the box, and the fixation on improved production values is also apparent. A cleaner, brighter rulebook is easier to parse, and at about two-thirds the length of the original edition’s rulebook, quicker to digest. Several single-sheet symbol breakdowns show clear descriptions of effects, and can be passed around the table to help as you learn the iconography. And another sheet depicts the card chains that are available for players who really like to plan ahead in their strategies.

Another important note is that the game’s player count has been revised. The original edition offered a two-player variant, but it was never the best way to play the game. With this new edition, publisher Repos Production seems to acknowledge that fact, and simply acknowledges that the game is explicitly built for three to seven players.

The box insert is more helpfully organized, with easy rounded pockets for quick retrieval of tokens inside. And, on that subject, the tokens themselves have been tweaked for easier quick identification at a glance, with a sharp black border aesthetic on many, and easier reading  of the numbers on the point value tabs, thanks to stark white backgrounds.

The biggest aesthetic jump is with the Wonder cardboard planks that act as a player’s central play area. The Wonders are now depicted on larger cardboard pieces than in the original, to better show off the evocative art. And unlike in the original, those large cardboard sheets now have different art on each side – a picture of the Wonder in the day, and a new, separate image depicting the same site at night – each offering a slightly different play experience.

While the many cards might not have the “wow” factor of the new Wonders, they manage a very close second. All the card backs are now coated in an attractive metallic sheen, split between bronze, silver, and gold, to match the three respective Ages through which the game moves. The effect lends an almost decadent vibe to the decks. Perhaps more importantly, the card fronts have been reorganized. Borrowing a presentation style from 7 Wonders Duel (an excellent 2-player game in its own right), the new cards layer all the relevant icon information at the top of the card, allowing for vertical stacking. In the prior edition, you’d have to fan the cards out in your playspace in order to see all the relevant info; this newer, vertical orientation makes for a cleaner and more organized table. That doesn’t sound like a big deal, until you’ve played a few games of the first edition of 7 Wonders, at which point you know that table sprawl can sometimes be a problem, especially in large player count sessions.

Beyond quality-of-life improvements and some new artwork, experienced players will note that some of the cards and Wonders have new values and resource costs connected to them. With a game as complex and multi-layered as 7 Wonders, I’ll be honest that it’s hard even after several playthroughs to speak to how those small tweaks change the value of individual cards and resources, in direct comparison with the older values. However, I can say with authority that the new edition still has that feel of seamless interaction and balance that experienced tabletop players begin to get a sense for. Play flows smoothly, all the strategies still seem viable, and the card chains and interconnections all match the theming of the ancient world. 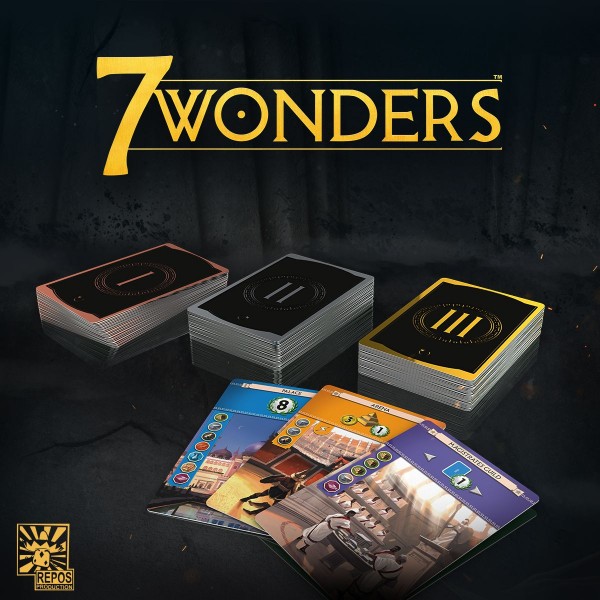 Should I Get The New Edition?

There’s an easy answer to this question if you don’t yet own 7 Wonders, but you consider yourself a burgeoning tabletop enthusiast. Pick up a copy of 7 Wonders, and make sure it’s this new edition. If in doubt, look for the positioning of the big statue on the cover. The new edition has the statue’s head directly underneath the “D” in the title. This is the better version to own if you’re starting fresh, and I guarantee, a stellar addition to your library.

If you already own 7 Wonders, I think the answer is more complicated. I’ve played enough of the original edition to say that it holds up quite well, even stacked against the alluring features of this new edition. Plus, you may have expansions for that first edition that you don’t want to leave behind. If that’s the camp you’re in, I truly believe you’ll continue to love your old (and likely well loved) copy.

With that said, this new edition is a beauty; if you’re a particularly enthusiastic fan of the game, you certainly won’t be sad to see the slick presentation and table presence afforded by this rework.

7 Wonders is stellar game that welcomes a broad range of players to the table. If you’re looking for a deep game with tons of replayability, and the ancient civilization vibe strikes a chord, you really can’t go wrong. However, if you’re looking for something else entirely, don’t hesitate to click into the Top of the Table banner from below to find dozens of other recommended board, card, miniature, and role-playing games. As always, if you need a bit more personal recommendation, drop me an email and I’ll help you find the right game for your family or friend group.