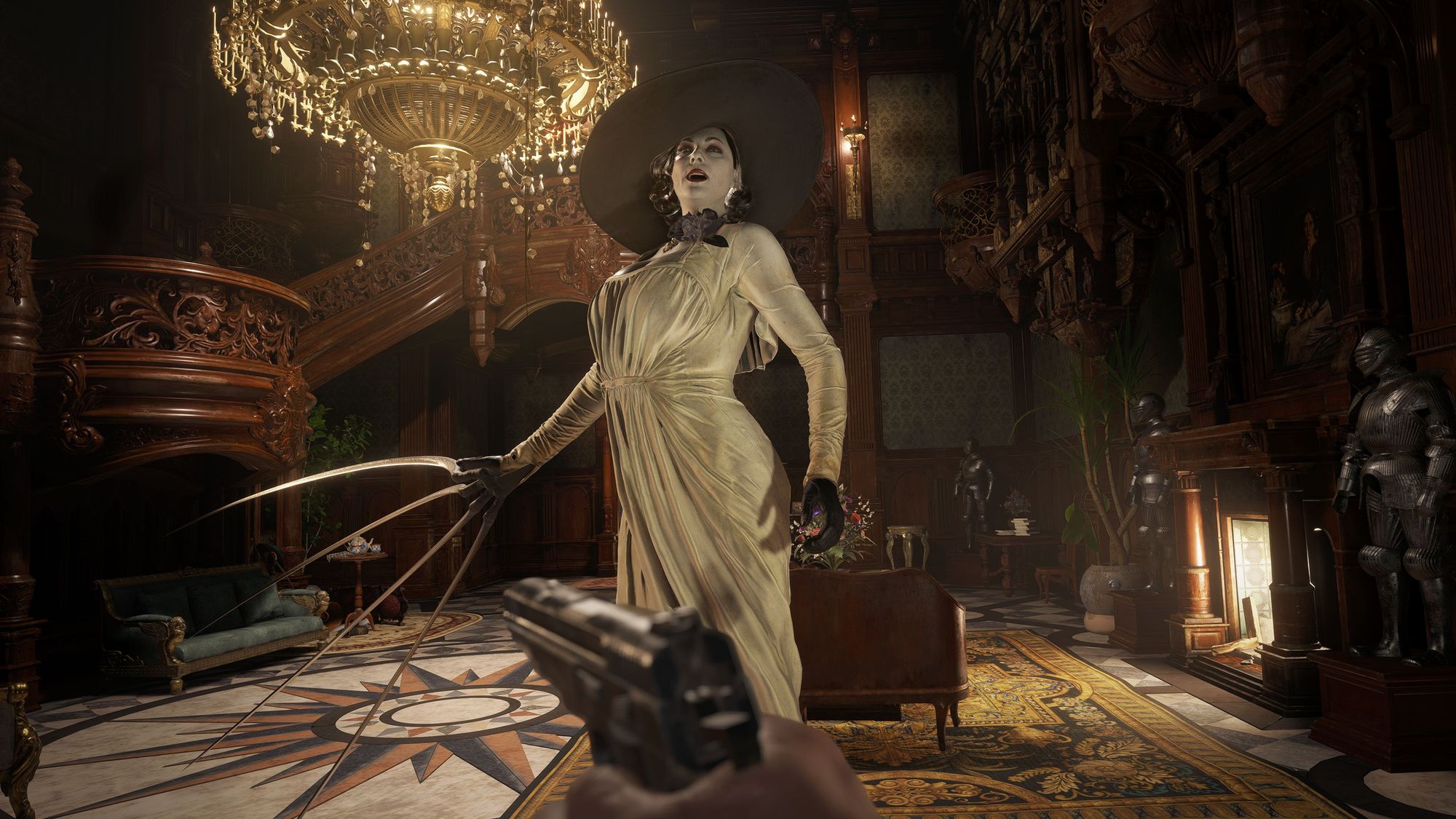 Last weekend’s foray into Resident Evil Village left most people feeling a tad short-changed, as there was barely any chance to experience anything tangible before the 30 minutes was up. Besides some sightseeing in the game’s titular village, and the chance to meet a few of the locals, it didn’t really give anyone that much to go on. In fact, for what was ostensibly a gameplay preview, the whole thing was weirdly limiting and padded with cut scenes that required no interaction whatsoever.

As such, we were keen to find out if the Castle Dimitrescu demo would offer anything more concrete. To recap the nonsensical arrangement, PlayStation owners were granted early access to two separate demos of Resident Evil Village, one taking place in the titular village and another within a gothic fortress nestled in the mountainside.

Both were relegated to an eight-hour window if you wanted to play them, so if you’re reading this on Monday morning the moment has passed. If you’re a PC or Xbox owner then you will have to wait until May 1 (or rather 1am on May 2 in the UK) to try out a demo that includes both portions within a one hour time limit. Which presumably all makes sense to somebody over at Capcom.

That’s not even the only quirk at play. A needless time restriction was imposed on the PlayStation demos, capping them at a hasty 30 minutes (the clock keeps ticking regardless of whether you use pause or not). When it came to the village half, this approach was entirely at odds with the slow-burn pacing and incentivised you to rush through what should have been some creepy moments. Plus, there was only about 30 minutes’ worth of content anyway, so you’d think Capcom would’ve just let you work through it at your own speed.

With all that said, you might be wondering if the castle demo fared any better under these bizarre conditions, or if too fell victim to that nagging stopwatch. Well, thankfully this chunk proved to be considerably more enlightening than its predecessor. Nevertheless, we still would have preferred to go through it without a countdown looming over everything, constantly pressuring you to skim through documents, hurry past intriguing points of interest, and disregard certain enemies.

After some rudimentary escape room puzzles, the first thing we did was bump into a new merchant character, known as The Duke. Much like Resident Evil 4’s charismatic vendor, this rotund aristocrat will hawk items and tune-up weapons in exchange for the coin you accrue by smashing containers and slaying monsters.

He’ll also shell out generously for any valuables that you happen to pick up in your travels and – judging by what we’ve seen so far – it’ll be worth keeping your eyes peeled for these cunningly hidden treasures. Again, it’s a welcome call-back to that beloved fourth game, as there’s nothing more satisfying in these games than auctioning off your shiny loot and investing the profits back into an improved loadout.

The preview only gave us a cursory introduction to the storefront, yet it’s reassuringly similar to how it was in the older games. You can buy healing supplies, extra inventory pouches, bullets, and incremental upgrades for your guns, with the caveat being that you cannot afford everything at once and will need to make difficult choices about how to spend your hard-earned dough. It’ll be interesting to see the various intricacies of this in the full game, because it was always a highlight of previous entries and it’s looking to be on the right track here.

Following our transaction with The Duke, we then wandered the available rooms of the castle, including a wine cellar, some bed chambers, and the lavish entrance hall. Each appeared to be concealing its fair share of secrets and locked compartments, which ought to bode well for fans of classic era Resident Evil level design. Given the numerous bolted doors, convenient shortcuts, and unfinished puzzles, navigating the castle should prove very compelling, especially when you’re being hounded by the towering Lady Dimitrescu and her vampiric daughters.

Speaking of which, our peaceful tour was eventually interrupted by one of those femme fatales, who proceeded to chase us into the dungeons. Once we shook our pursuer – and recovered from the associated heart palpitations – we then had to solve a quick riddle, before descending further into the dingy undercroft.

Those who downloaded the Maiden demo would have immediately recognise this unpleasant jail, thanks to its abattoir-like décor and creaky prison bars. Only this time the cells weren’t so empty and instead housed strange goblin creatures that wanted to gnaw Ethan’s skin off. It was at this point that we finally got to experiment with Village’s polished combat (after the briefest taste in last week’s demo) and it seemed to work very well.

Enemies react to damage in believable ways, collapsing to their knees when shot in the leg or dropping weapons if you hit their dominant hand – and guns feel genuinely impactful for a change. If you can successfully keep your head whilst dealing with the horde, there’s scope to play tactically as well. For example, a well-judged pipe bomb can dramatically thin their ranks and, should you position yourself cleverly enough, it’s possible to take them on individually with your combat knife.

Yet, crucially, the monsters aren’t pushovers and can swiftly overwhelm you if you’re not careful. Of course, you can always try running away, but then you take the risk of backing yourself into a corner. As such, you’ll have to weigh up your options in the heat of the moment and, whether it goes right or wrong, the results are guaranteed to be exhilarating.

Resident Evil’s latest is shaping up rather nicely, seeming to combine the best elements of the franchise’s illustrious past and its exciting present. And even though the demo itself was strangely presented it was still a lot of fun. Roll on May 7!