Apex Legends’ ninth season is finally underway – or at least, sort of, what with all the server errors – and Respawn quietly snuck in a new feature alongside the highly anticipated Arenas mode and Valkyrie Legend. You can now report other players for smurfing.

Smurfing doesn’t mean that you paint yourself blue like Tobias in Arrested Development. What it means is that you create a new account despite being highly skilled on your main just to face off against worse, newer players. You can’t play ranked with those two tiers lower, so smurfs can make new accounts to accomplish this by purposefully getting poor score to be ranked lower. With this, you gain an advantage while the other players in the match are put at a disadvantage.

It’s a tough one to control because for some, it might be that they simply moved platform or jumped from one shooter to another and the skills came right along with them. It’s also very hard to prove beyond a reasonable doubt so banning is out of the question. Reporting might have been added to simply filter out the falsities among the hacking complaints, but it could also be used to bump up reported accounts to higher skill-based matchmaking to ‘fix’ (or at least, attempt to fix) the problem. 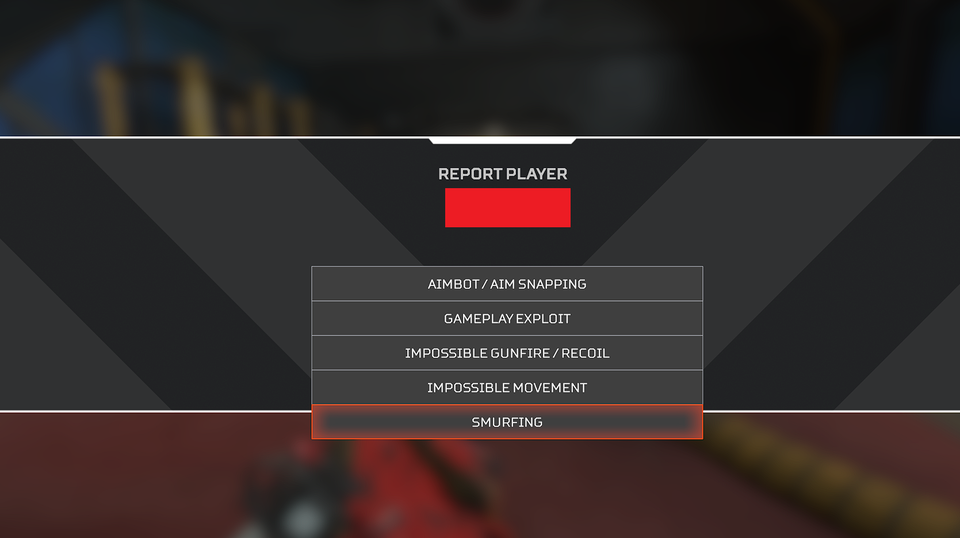 In any case, it’s now a potential report slotted alongside aimbot, exploiting, impossible gunfire, and impossible movement. That being said, smurfing has always been something Respawn has frowned upon. It’s vaguely mentioned in the rules of conduct that state that you should not “engage or assist in cheating or other anticompetitive behavior (such as boosting, collusion, and match or matchmaking manipulation.”

Smurfing could be viewed as “matchmaking manipulation” or even “boosting” given that you are cheating the system by making a new account to play with lower-ranked individuals. In turn, that could allow for you to buddy up with a friend who is too low to play with on your main, helping to boost them up. It’s likely not a bannable offense akin to hacking, but there’s no doubt some form of repercussion awaiting those caught out, however that would be determined.