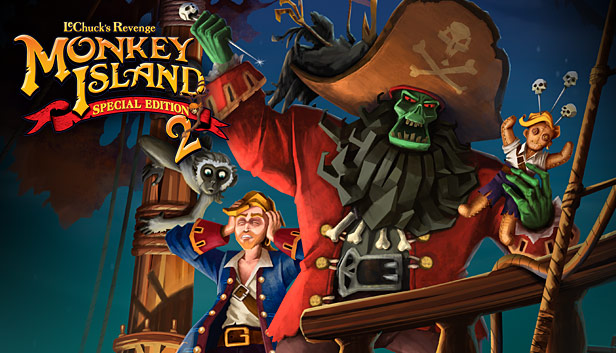 Ron Gilbert and Dave Grossman have shared some of their plans for Return To Monkey Island, as well as the first screenshots.

Easily the best April Fool announcement of 2022 was a new Monkey Island game, because this one was actually real. Not only that, but series creators Ron Gilbert and David Grossman are spearheading development and it’s coming out this year.

The announcement trailer didn’t reveal much beyond that, although Return To Monkey Island is described as a follow-up to the first two games, suggesting that it will ignore everything that came afterwards.

Gilbert and Grossman have since explained their plans in a bit more detail, including that the new game will pick up right where the second game, Monkey Island 2: LeChuck’s Revenge, ended.

‘One of the things that was very important to me about this was that I did want the game to start right at the end of Monkey Island 2, when you walk into that amusement park. I wanted the game to start there,’ says Gilbert.

‘That was kind of my one criteria: we need to start the game there. I don’t want to go into all the details of it, but we do start there, and then it takes lots of weird twists and turns that you would expect from us.’

This suggests that fans will finally get an explanation for Monkey Island 2’s frankly bizarre ending (WARNING: spoilers for a 31-year-old video game).

During the final confrontation between protagonist Guybrush Threepwood and the villainous pirate LeChuck, it’s revealed that LeChuck is Guybrush’s brother Chuckie.

Then a workman comes into the small room they’re in and tells them they’re not supposed to be there, they leave and become children in a Disneyland style amusement park.

Is this meant to imply that everything was just two brothers playing pretend? Apparently not because, as they’re about to leave with their parents, Chuckie’s eyes glow an ominous red.

The third game, The Curse Of Monkey Island (which Gilbert and Grossman had no involvement with) basically ignored this ending and it was never addressed in subsequent games either.

While Gilbert has always had ideas for his own Monkey Island 3, he stresses that Return To Monkey Island won’t be the same game he imagined back in the day.

‘The honest truth is that neither of us would be able to make the game we would have made back then. We’re different people. The ideas I had floating around in my head for what my Monkey Island 3 would have been, a lot of those ideas have already been done,’ he tells Adventure Gamers.

Speaking of the other games, Gilbert and Grossman make it clear that they don’t want to invalidate them or retcon them out of existence. Especially since there are aspects they liked about them and want to embrace.

‘I remember some of those conversations Dave and I had, there was this kind of tendency to just throw everything out, let’s just start over,’ says Gilbert. ‘But the thing we finally came around to is, these are very beloved games. We didn’t make them, but there are still a lot of good things in those games, and we wanted to embrace those, not whisk them away.’

Grossman adds ‘We talked all about canon and these other games, and the fact that we liked them, and the audience liked them, and so we made it our point of philosophy to adhere to canon wherever possible, but with two caveats.

‘One of which is, it’s actually kind of hard to keep track of everything that’s canon, and some of these other games don’t even agree with each other. So a little bit of paradox is necessary and probably healthy for us as creators and as human beings.

‘And the other caveat is that too much canon can get in the way of the story you’re trying to tell, so we decided that we would adhere to canon unless it was going to get in the way, and we would ignore some minor details if we needed to.’

We’ve already seen an example of this in the teaser trailer, as it features the character Murray, the fan favourite talking skull from the third game and all the subsequent sequels. Guybrush’s love interest Elaine will also make a return and will even be voiced by her original actress Alexandra Boyd.

Dominic Armato has come back as Guybrush as well, but LeChuck will have a new voice actor since his original actor, Earl Boen, retired in 2017.

Return To Monkey Island releases in 2022.