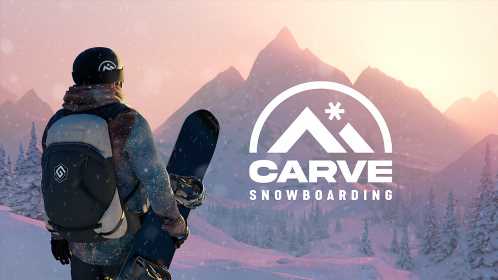 When Facebook held the very first Oculus Gaming Showcase in April 2021 there was lots of excitement regarding what new videogames might appear. In fact, most of the news was focused on updates for existing titles. Only one was actually brand new, Chuhai Labs’ Carve Snowboarding, gaining plenty of interest considering the studios’ CEO Giles Goddard worked on 1080° Snowboarding for the N64 back in the ‘90s. Bringing that knowledge into VR, Carve Snowboarding offers up a tantalising slice of downhill goodness.

The Oculus Quest library isn’t short of sports titles but what it is completely devoid of is anything related to snowboarding. That’s probably because trying to create mechanics which naturally involve your feet isn’t particularly easy. While stick controls work perfectly fine for normal, flatscreen snowboarding videogames that method of input just won’t cut it in VR. So the biggest worry was always going to be how Carve Snowboarding makes you feel like you’re zipping down a mountain like a pro snowboarder whilst retaining that immersive quality everyone loves about VR.

And to Chuhai Labs’ credit the system it’s created is wonderfully simple yet natural enough that even on the first course, gliding past obstacles and jumping into the air felt seamless. Whether you ride regular or goofy the basics remain the same, your front hand controls the front of the board and backhand the back. Lift both up at the same time to jump. This means the main snowboarding controls are buttonless, gently moving those hands to change direction. To begin with, the front steering control was all that was needed, cutting through the soft snow to the bottom of the mountain. It’s only when you start tricking that the complexity kicks in.

These are a combination of spins and board grabs (obviously), with six points on the boards to grab and perform various manoeuvres. Even though Carve Snowboarding isn’t in any way casual, thankfully Chuhai Labs didn’t go down the route of fully performing 360’s. All you do is hold the trigger down and the board spins beneath you. That might not sound immersive but the system works perfectly well, and the alternative of virtually spinning around and around like a spinning top would be incredibly uncomfortable for most players.

Once acquainted with the controls Carve Snowboarding is truly an exhilarating experience, whether you’re on the ground or in the air, it is a lot of fun. The wind whistles past your ear increasing as your speed picks up and there’s a suitable rumble when you go off course and into the deeper snow.

Away from the mountains it embraces the ethos that VR videogames need more than just a bunch of menu’s, they need a nice hub area you can settle into, Carve Snowboarding drops you into a nice wooden cabin full of the usual luxuries. You’ve got a big screen TV acting as your mode control, a rack of snowboards is on the wall for you to muse through; giving a retro vibe is the cassette boombox, plus there’s a roaring log fire to warm those hands-on. It’s a cosy, well thought out location, providing a suitable reprieve to the snow-based exploits to come.

Carve Snowboarding is about two things, speed and creativity. Levels are split between a Time Attack mode and a Freestyle Mode – no guesses for how those work – so you’re either bombing down the mountain as fast as possible trying not to face-plant a boulder or looking for the best trick opportunities to score big within two minutes. That is your lot though, there’s no narrative to speak of or character to embody, just you and those challenges to beat.

Which is fine, there’s nothing wrong with pure snowboarding but it does feel a bit lifeless, even with a pet pooch curdled up on your cabin’s bed to fuss. Even some of the most basic VR titles have a little bit of a backstory to ground you in the experience. Elements like the music system with its customisable playlist do help to alleviate some of that void but not enough. A multiplayer might have helped yet Carve Snowboarding offers a lonely mountain just for you. Time Attack features Global and Friend leaderboards so there’s a bit of competition, strangely nothing for Freestyle.

There’s plenty to explore and Carve Snowboarding actively encourages it with a bunch of hidden collectables. Each of the six courses offers multiple routes to find as you try to shave vital seconds off a time, however, it’s worth keeping an eye out for the spinning icons which will award you new boards, gloves and tunes to listen to. Boards are the most highly prized as they have different stats, some better in deep snow whilst others are good to trick with. This means if you’re struggling with a certain medal then locating a new board might just help.

And there will be moments of struggle. Unlocking new locations means getting five medals from the previous one, with each mode providing four with a total of eight per area. Chuhai Labs has set the challenge level high so repetition is a given, meaning you’ll need to sink a good few hours into the experience. It did seem amiss though that there wasn’t a free play option to explore the locations without a timer.

As for comfort Carve Snowboarding is most definitely on the intense side of the scale. Literally, as you start the software the very first box issues an intensity warning with the option to add a vignette – an apt snow vignette. In actuality, after several hours of playing there wasn’t the faintest whisper of discomfort, even after ploughing into several trees in a row. There is the option to play seated should you need it, although Carve Snowboarding definitely isn’t a sofa game.

Saying Carve Snowboarding is the best experience of its type is a bit mute considering the lack of competitors on Oculus Quest. That said, any that do come along will have a tough time competing against Chuhai Labs’ winter offering. What it lacks in personality and charm Carve Snowboarding makes up for with (mostly) on point mechanics and adrenaline-charged gameplay which will make most players smile – or barf! Even after hours going down the same 6 mountains there always seemed to be a new gap to venture through and most importantly, it never got boring.