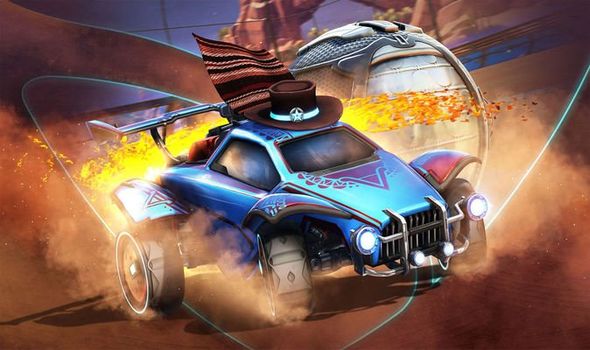 This week’s big Rocket League Season 4 update will include a new Arena, alongside the regular Battle Pass and background fixes.

Deadeye Canyon will be the dustiest Arena yet and perfectly fits the Wild West theme of the Rocket Pass.

But the biggest prize is being saved for the Rocket Pass Premium package, which includes the new Outlaw car.

Wanted for boost stealing and demo hunting, Outlaw will be unlockable starting later this week and part of a Rocket Pass that boasts 70+ Tiers.

And as always, owners of Rocket Pass Premium receive an XP boost and additional Weekly and Season Challenges.

Behind the scenes, Psyonix says they are expanding Tournaments to cater for both 2v2 and Extra Mode, alongside refreshed rewards to unlock.

Gamers can also look forward to 2v2 Heatseeker becoming the featured LTM of Season 4, with Speed Demon replacing it on August 19.

For those who never played it, Speed Demon combines mutators, the speed of Boomer Ball without the wild bounces, demos on contact, and a fast respawn timer.

Meanwhile, Spring Loaded, the Rumble variant that is currently a mutator option in Private Matches, will also be added to the LTM mix later this month.

WHAT IS THE ROCKET LEAGUE SEASON 4 START TIME?

Developers Psyonix has confirmed that Rocket League Season 4 will start at 4pm BST on Wednesday, August 11.

But before that arrives, all Rocket League players will need to download an update on August 10.

This will be available to download starting at 4pm PDT on Tuesday and will contain everything needed to launch Rocket League Season 4.

Psyonix has also confirmed that Competitive Season 3 ends at 7:30am PDT (2:30 p.m. UTC) on August 11, and Competitive Rewards will be distributed after Season 4 begins.

And here are the other features and changes being prepared for the launch of Season 4:

Following the start of Season 4, players who queue in Ranked playlists in an undersized party (a party of two players in Competitive 3v3 Standard, or a party of two players joining a 3v3 Standard Tournament) will have to be within three Ranks of each other in order to queue. This is so the third teammate that is found via matchmaking will join a team that is roughly the same Rank as their teammates. For example, if one party member is Platinum 2 and another is Diamond 3 (a gap of four Ranks), they will not be able to queue in 3v3 standard.

We know that it can be frustrating when teammates leave Casual Matches early, and we’re taking steps to improve the experience. After the update, we’re adding the ability to forfeit Casual Matches just like Competitive Matches. If all players on a team vote to concede, the Casual Match will end just like it were a Competitive Match. With the option to concede being added, we’re also adding matchmaking bans for players who continually leave casual matches. For the players that only occasionally leave Casual Matches, there will be no penalty for leaving one Casual match per day.