SDCC: The Severance Haunted House Made Me Wish I Was Actually Severed

San Diego Comic-Con wrapped this past Sunday, and for attendees and fans who followed all of the big reveals at home, the convention is largely in the rearview. I had a great time touring the show floor, shopping for weird trading cards, and interviewing the devs behind games like Gotham Knights and Multiversus, but the one experience I can’t stop thinking about was Apple TV+’s Severance experience, an interactive walkthrough of the Lumon Industries offices. I’ve been to several “activations” like this before, but never one so terrifyingly authentic. Watching Severance made me uncomfortable, but to actually be trapped in its white collar hell, surrounded by business casual demons wearing plastic smiles, may have done some actual damage to my psyche. And since I can’t afford therapy, allow me to instead pass my trauma on to you.

The event took place across the street from the San Diego Convention Center inside the Hard Rock Hotel, but once the tour started and I stepped into the conference room where Helly woke up in the first scene of the show, the reality of the outside world was all but erased from my mind. As everyone in my group settled in, Adam Scott’s voice came out of the speaker in the center of the table. “Who are you?” he asked twice. “I’m sorry, I got ahead of myself.”

This first part of the tour really put me on edge, not just because of how well it recreated the beginning of the show, but because of something that I’m not even sure was supposed to happen. Ten of us walked into the conference room to start the experience, but there were only eight chairs around the conference table. At each seat was a Lumon tote bag and a new hire orientation manual, indicating the experience was meant for exactly eight people. Another participant and I let everyone else take a seat as we stood uncomfortably by the door, wondering if we should ask to be let out so we could rejoin with the next group. But after a few moments and Lumon employee came into the room and started the show. He talked to us as if we were new employees with no memories, told us what our names were, and greeted all ten of us individually. After a few moments of interaction, the door leading to the next part of the tour opened and everyone filed out.

But here’s the really weird part. As everyone got up from the table and exited with their tote bags and manual, we found two more sets sitting at the end of the table. They weren’t there before, I’m certain of it, and the Lumon employee didn’t bring them in with him. I have no idea how they got there or if their mysterious appearance was even meant to be part of it, but suffice to say it was an unnerving start to a bizarre and uncanny experience. 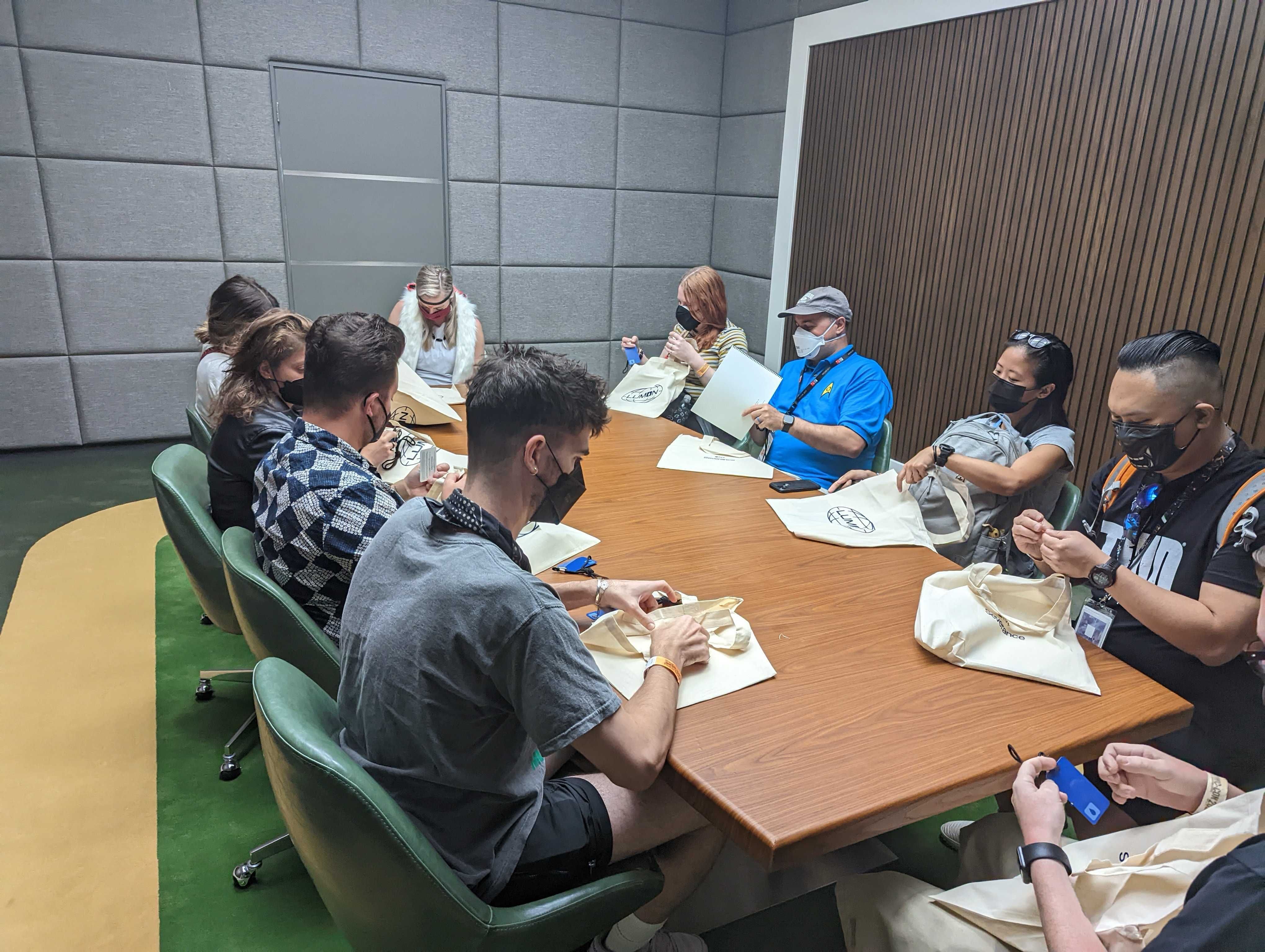 From there we entered the Optics & Design department where a stand-in for Christopher Walken’s Burt Goodman gave us a quick Kier Eagen history lesson (praise Kier) and invited us to open drawers and explore the art. When I discovered the painting that depicted O&D beheading and feasting on the corpses of the Macrodata Refinement department, Not-Burt rushed over to slam the drawer shut and assure me that the image was a creation of pure fiction, and not something to be worried about.

While we explored O&D, group members were periodically pulled aside by other Lumon employees for private discussion. I was too nervous to eavesdrop for fear of overstepping on my first day on the job, I guess, but I did see one employee hand an eraser to an attendee. I still don’t know what any of that was about, but from talking to other people about the tour I learned that some people were taken to the breakroom. I don’t feel bad for missing that particular part of the show.

From there we headed into a Wellness Session with a stand-in for Ms. Casey, one of Severance’s most disquieting characters, and I was invited to sit with her to hear some calming facts about my Outie. I was told that my Outie was a friend to small animals and that he recently found a shiny coin. When I chuckled at that detail, Ms. Not-Casey warned me not to show an emotional reaction that would indicate I favor one fact over another. When the session ended we all exited the room while the counselor seemed to power down, staring vacantly with unblinking eyes into the distance. 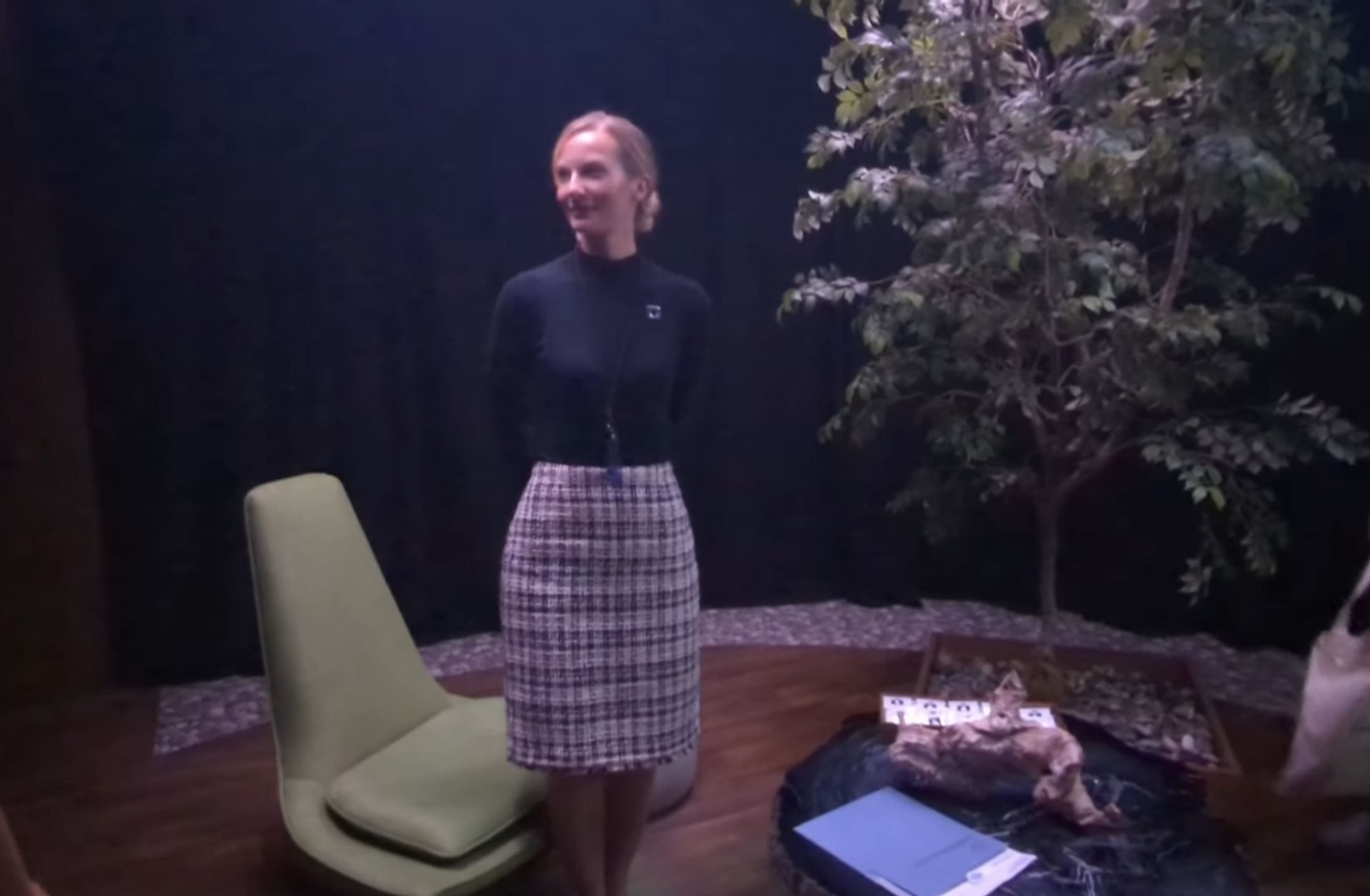 Next was the security room, where a distraught Lumon Employee told us that something wasn’t right about the company and asked us to help him follow instructions he had gotten from someone on the outside. As we worked together to turn knobs and flip switches we were interrupted by another employee who was angered to see us breaking protocol on our first day. We followed him past the room full of baby goats and into the Wall of Smiles, where we called on several participants to name their favorite Lumon core value (mine’s benevolence) and choose the smile that best represents that value. When that portion of the tour ended he speculated for a moment about what the purpose of Lumon’s work might be. One coworker, he says, thinks we’re developing a way to harness lightning to kill all the wolves.

The last stop is the Macro Data Refinement office, where two very chipper employees take our group photo and invite us to sit at the computer and start sorting groups of numbers into bins based solely on the way they made us feel. After a while it was time for the dance party, and as the fluorescent overhead lights shifted to strobing neon colors, I had what I can only describe as the opposite of an orgasm. 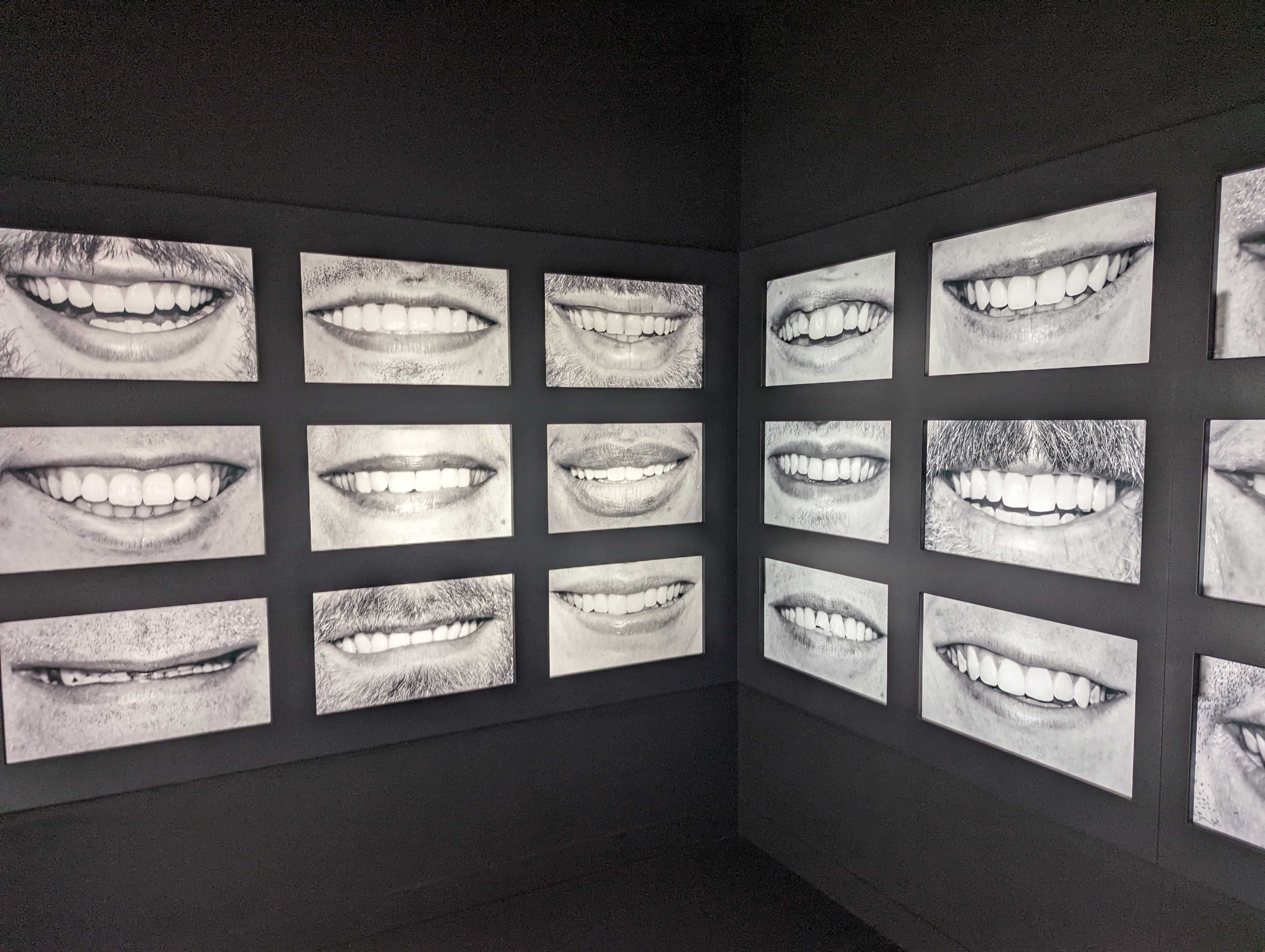 If there was one aspect of the tour that disappointed me it was the ending. As our first day as Lumon employees came to an end, we all piled into the elevator together to leave. I fully expected the doors to close and reopen again in the same place as if it was the start of the next day, but there was no such trick. Instead, the lights flickered and the doors opened on the other side. We exited to find one of the employees – the one that had just taken our group picture in the MDR office – leaving for the day. It was a neat little reveal, considering there were no obvious alternate exits from the office, even though it didn’t make sense for her to be there.

The irony of the Severance tour is that no matter how perfectly it recreates the settings and the iconography of the show, it can't capture all the thematic layers that give the show its meaning. The relationship between memory and experience, the profound inescapability of grief, and transactional nature of labor and time are pushed aside in favor of the aesthetic – which, to its credit, it handles masterfully. The reason I can’t stop thinking about my first day as a Lumon employee is precisely because I’m not supposed to remember it at all. This paradoxical experience, that hundreds of convention-goers lined up for hours to enjoy, is the exact (and I mean exact) experience that the characters of Severance will do anything to escape. Taking my memories with me defies the nature of a black box. That’s what disturbs me the most, and now I wish I was actually severed.