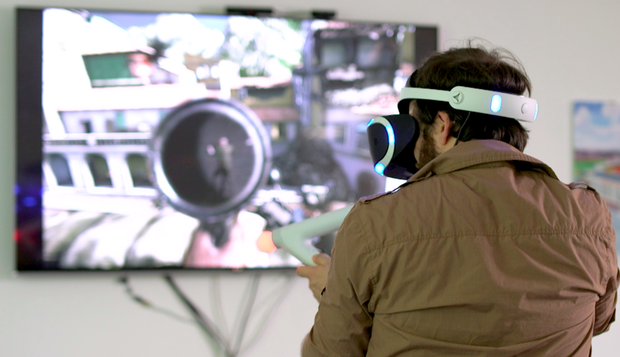 That said, judging by the demo these levels won’t be on the same kind of scale as the ones from the main series. By necessity, they’ll be smaller, keeping the action focused in one direction as you progress.

Series die-hards may be upset to learn that you won’t be Nazi-blasting as longtime posterboy, Karl Fairburne. Instead, you’ll be filling the role of an Italian partisan sniper during the German invasion. Although set in the same theatre of war as Sniper Elite 4, this newest entry in the franchise takes place before the events of that game.

Just how much story content Rebellion will pump into Sniper Elite VR is unknown. Unsurprisingly, Steve Bristow – one of the project leads – told us that the team wants to focus solely on translating that familiar Sniper Elite gameplay as best as they can. Once they’ve got that locked in, everything else will then slot into place.

It makes sense and from what we’ve played, the developer has already nailed that core loop of gunning down fascists in cinematic, sometimes humorous ways. If the full game has enough in the way of interesting level designs, diverse gunfights, and perhaps a compelling narrative thread, Sniper Elite VR could easily go from intriguing offshoot to a must-have for VR gamers.