Your quest to save the resistance has now taken you back to Les Invalides. But don't worry, Steelrising isn't recycling areas you have already worked through. This time around, you will be exploring Faubourg Saint-Germain; which is a whole new section of this sprawling map.

Your time will be spent meandering through palatial estates, looting ruined apartments, and generally crushing robots. You may even tango with a familiar-looking Unstable Automat. Read this guide to stay on track and avoid getting hopelessly lost. We may even do you a favor and point you in the direction of the best treasures. 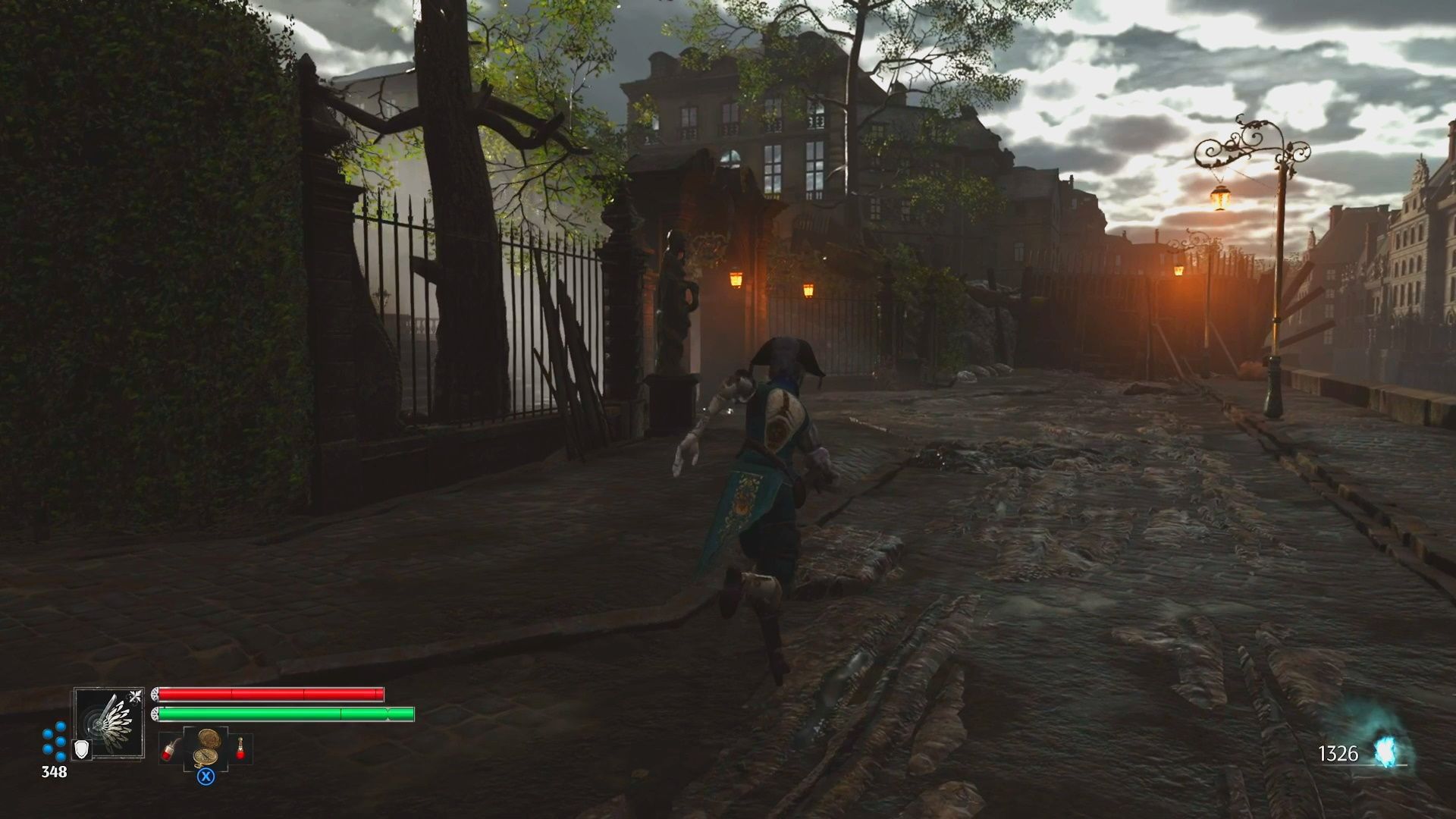 You will start this stage by entering in through the giant golden gates beside your carriage. Follow the street and take a left at the archway. You will enter into an estate. There is a Lightning Ram positioned below the stairs and a Lancer positioned above them. Run right past the Lightning Ram, take out the Lancer first, then finish off the brute. The hedge wall has an open passageway. Go through it. If you travel straight, there will be one of those Lunging Automats. 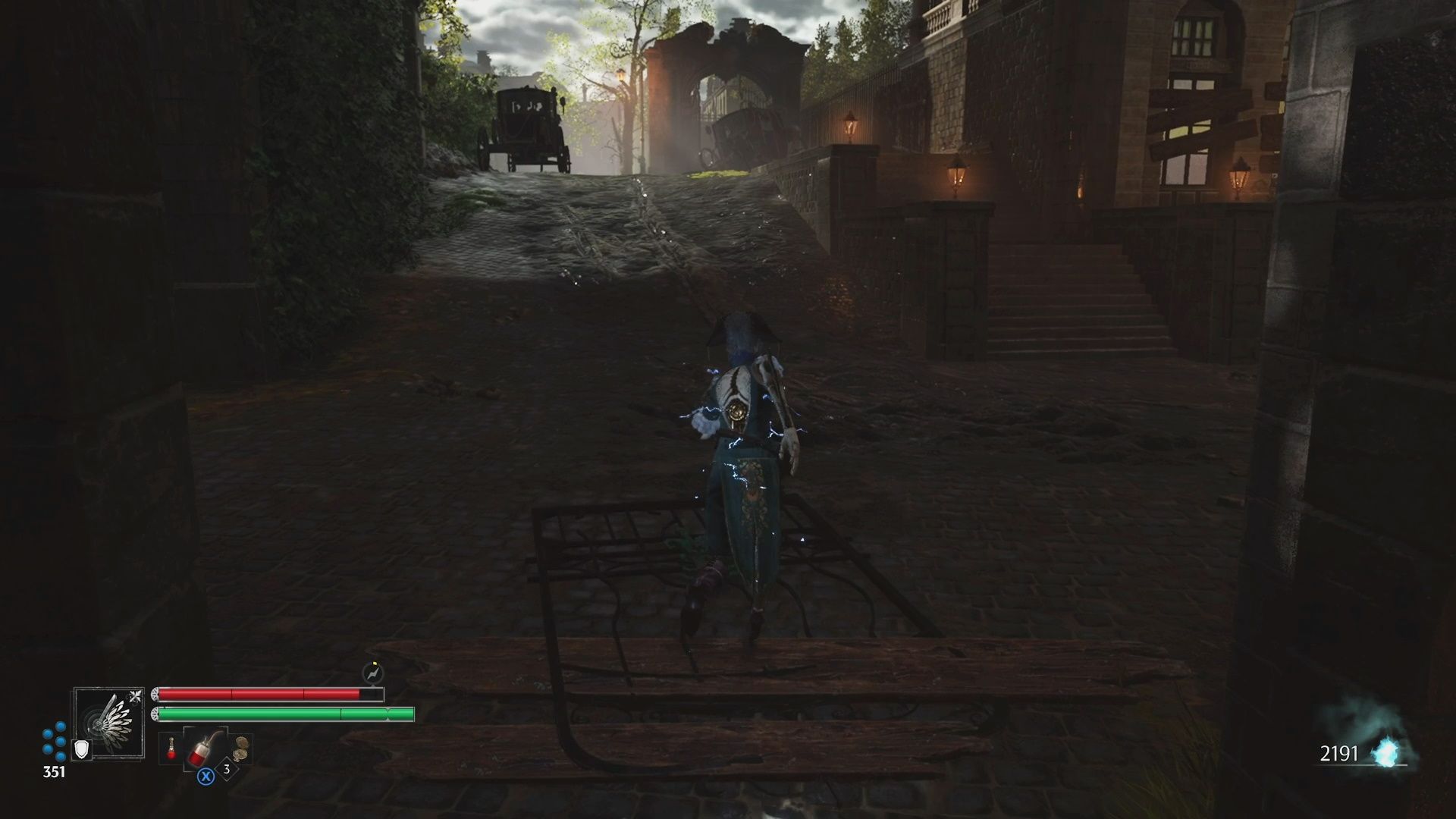 While you may be tempted to sneak up on the Lunger, what you don't see is that there is a Lancer to their left (obscured by a building), waiting to snipe you as you sneak up on their buddy. So instead, draw the Lunger to you, away from the clearing; that way you won't have to deal with the Lancer's projectiles while you fight them. After you kill it, chase the Lancer down as well. To the right of where the Lunger was patrolling is an open gate, enter that area and grab the Module Key from the downed Automat in the corner, then travel down the path you fought the Lunger and Lancer on. 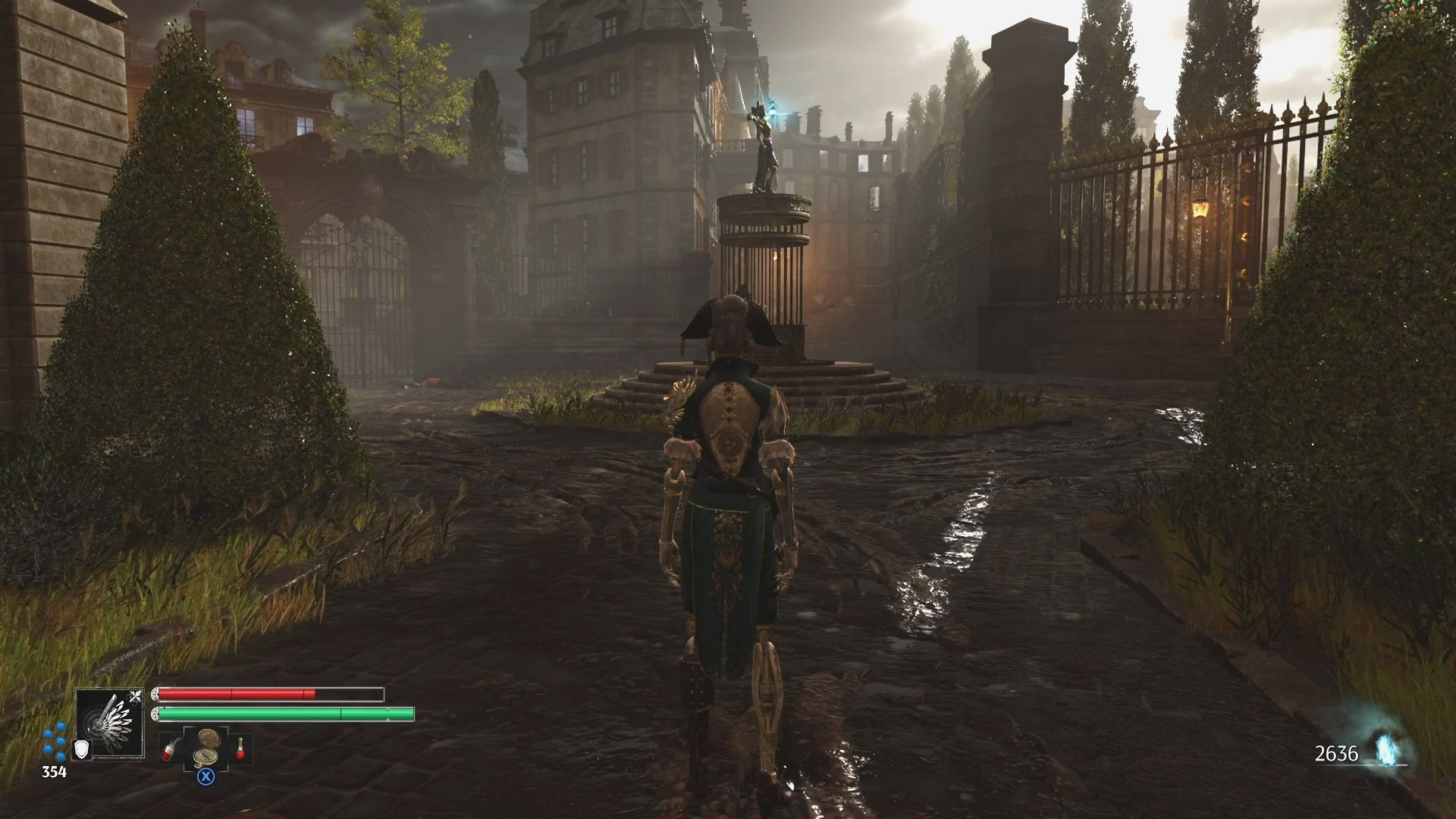 The next area you enter will have a Vestal; activate it, then head toward the garden and find the two pieces of evidence. The first is in the house itself. You will have one of those visions. Open the chest in this room to get the Quadrille Culottes, Shoes, and the Fire and Ice weapon. Once you leave that building, travel to your left (you will have to loop around a hedge). The next piece of evidence will be sitting in front of a smaller building over here. Once you have the two pieces of evidence, head back to the Vestal. 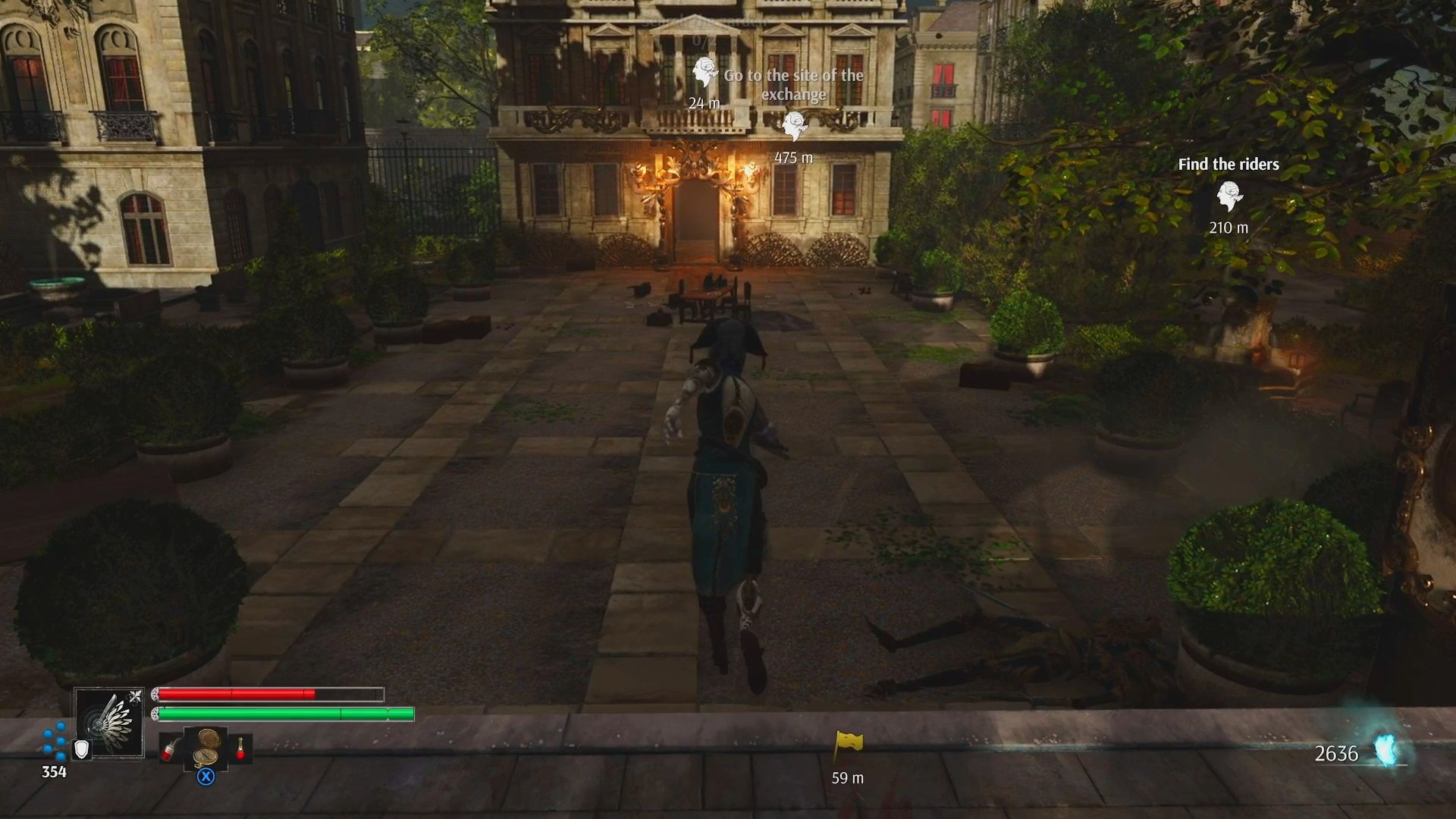 Travel down the alley that is opposite the estate we found those clues in. Look up and you will see a grappling point. Grapple up there, then move through the apartment and around onto the balcony. The gate opposite that balcony has been bent, so you can perform an air dash and sail right over it. You will enter Monsieur Necker's Townhouse. 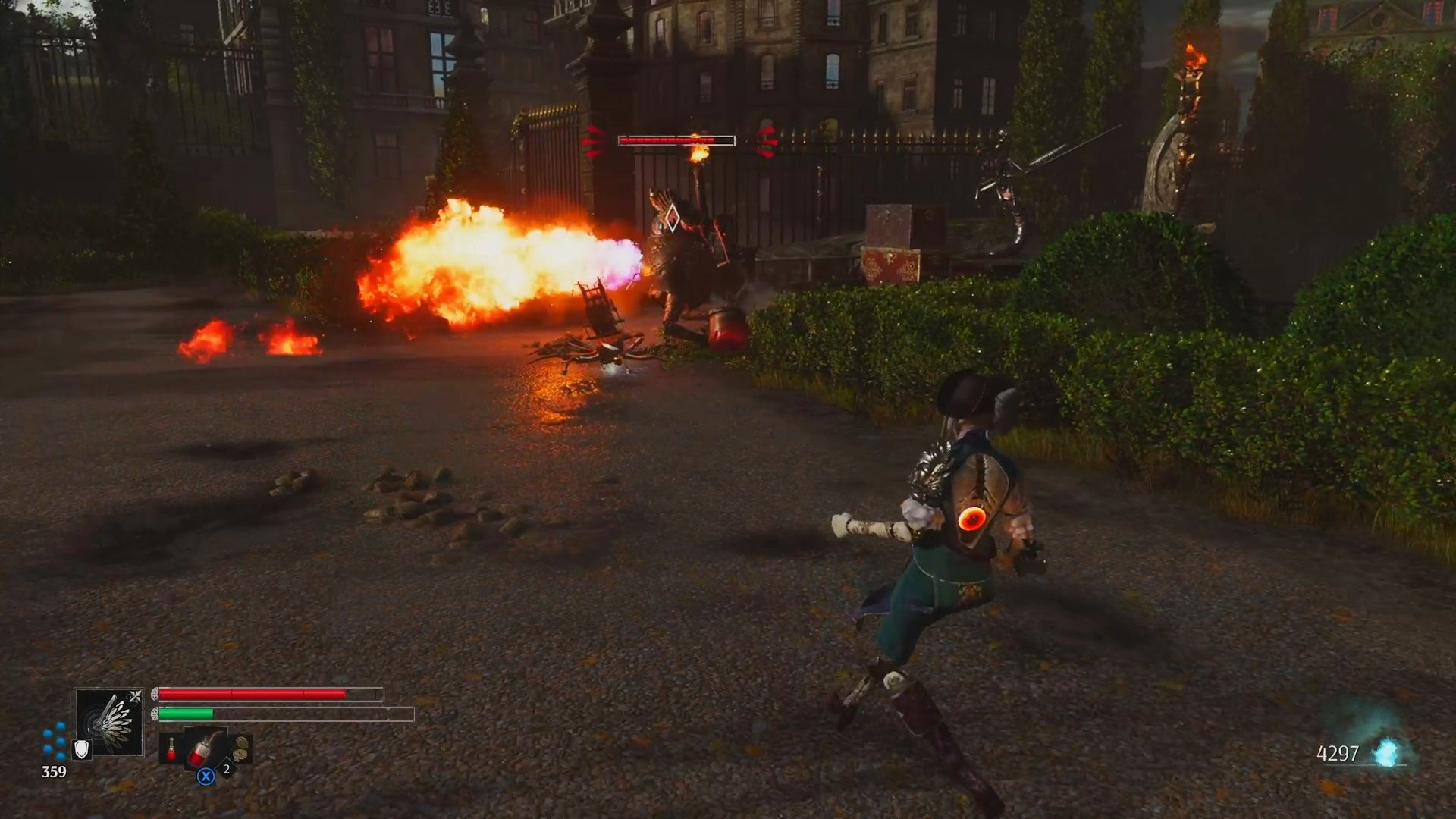 Now take out the Trumpet-Playing Automats and open the front gates by pulling the lever. Up the stairs you will be fighting a Spider Automat, and a Tar Spraying Automat that is a variant of the Butcher-type. The Tar Flinging Automat can toss hot tar at you from its bucket, and it can pour the tar into its furnace-like belly to cause flames to erupt from it. 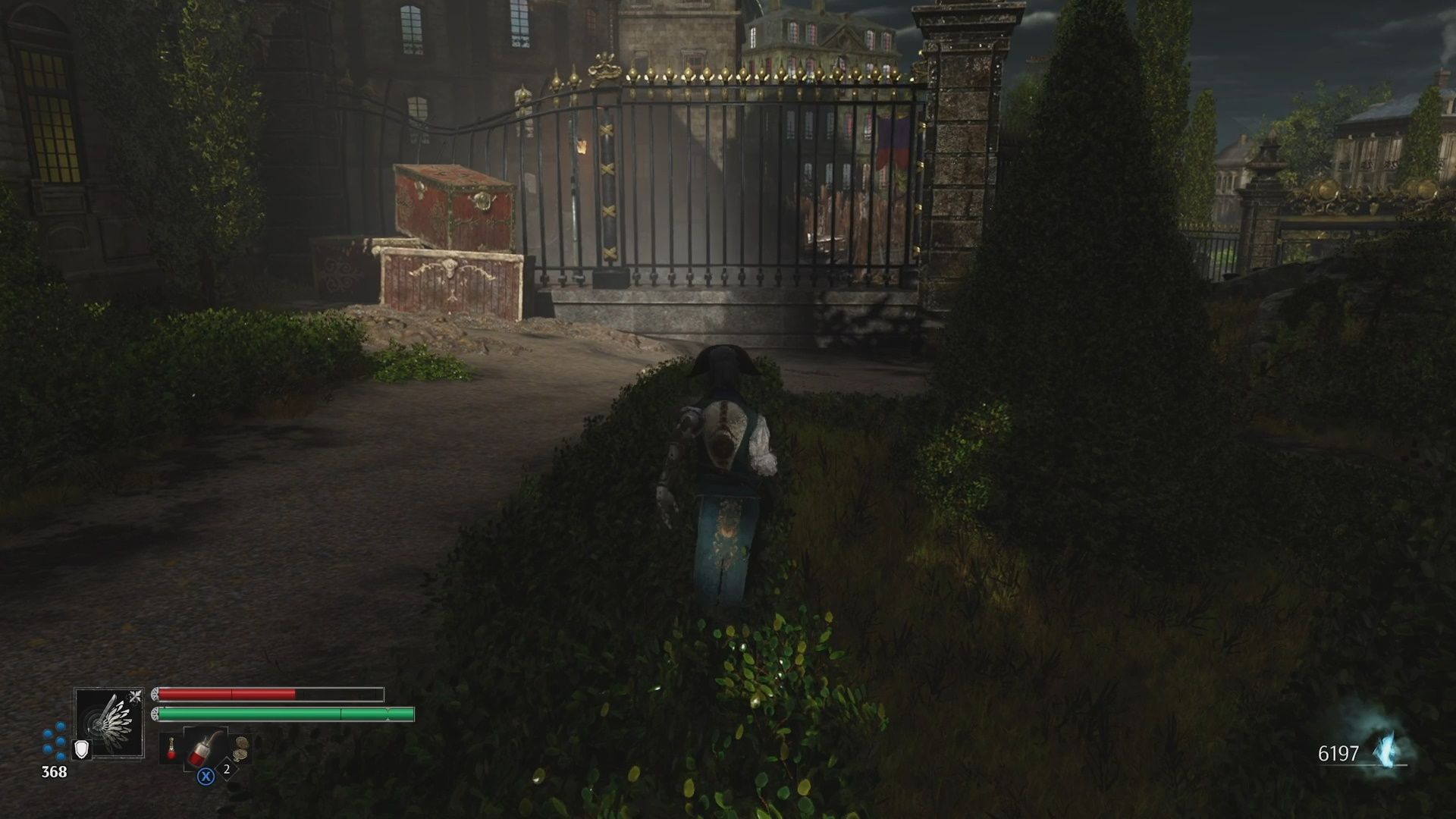 However, a good ol' fully charged attack will still put it on its butt. So, when you see an opening, let one rip, and then follow it with another. All in all, they aren't that different from the Club-Wielding version. Keep traveling upward, and you will clear out two more Trumpet-Playing Automats. Now, look for a bunch of large trunks stacked near a bent-over fence. Hop on top of them and over said fence. You will be back to the Faubourg Saint-Germain again. 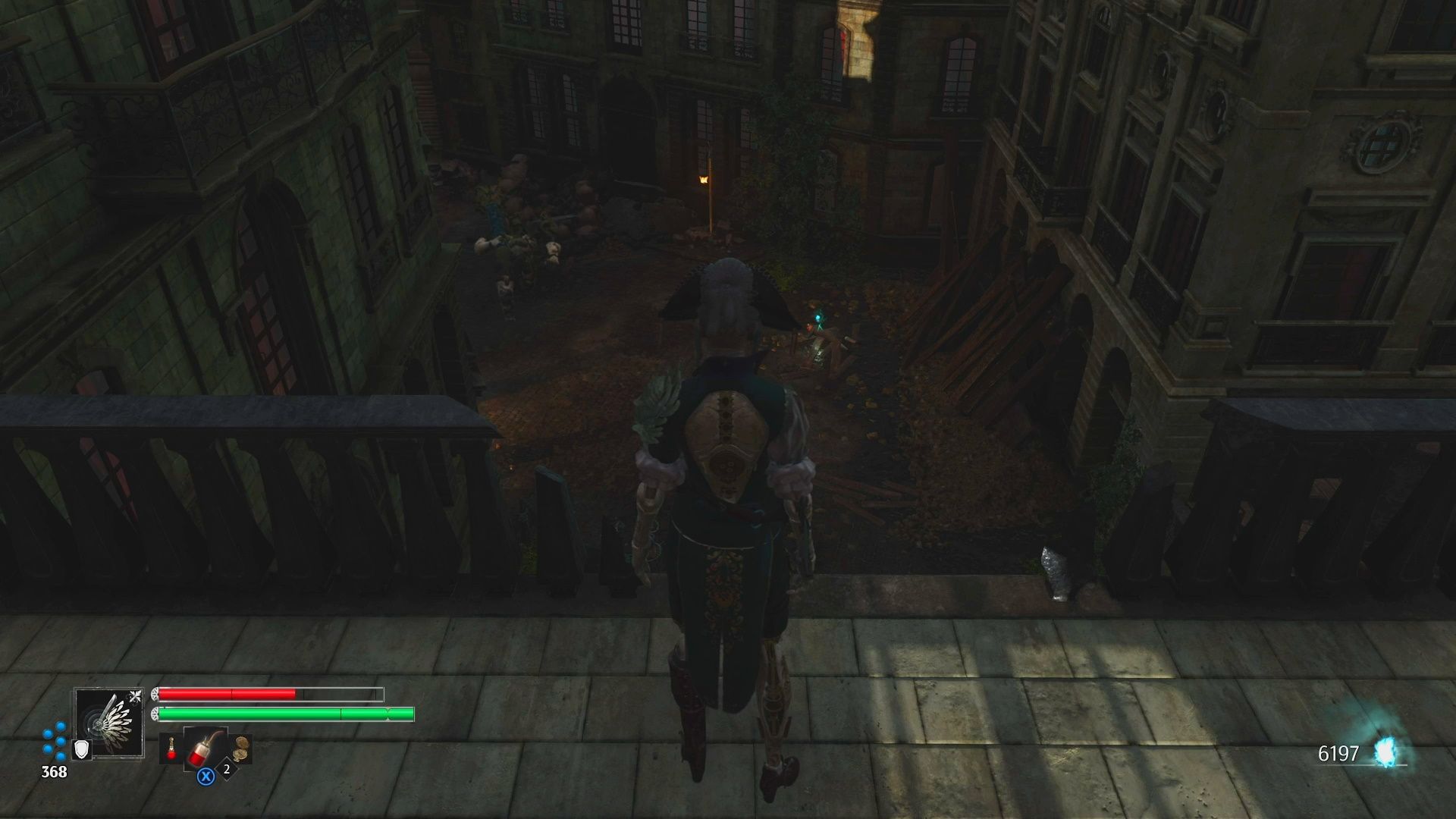 Grab the glowing trinket at the end of the street to trigger another memory, then head for the townhouse on your right. Grapple up to the second floor, pass through the apartment, and then jump down on the other side. Hop down and destroy your first non-Unstable Pilliary Ram-type Automat. There is another standard Automat kicking around as well as a Spider Automat, so don't be surprised if you end up having to fight all of them at the same time. To avoid this, draw the Statuary Ram close to the building they hopped out of. Now, take a left and you will fight the Unstable Frost Acolyte. 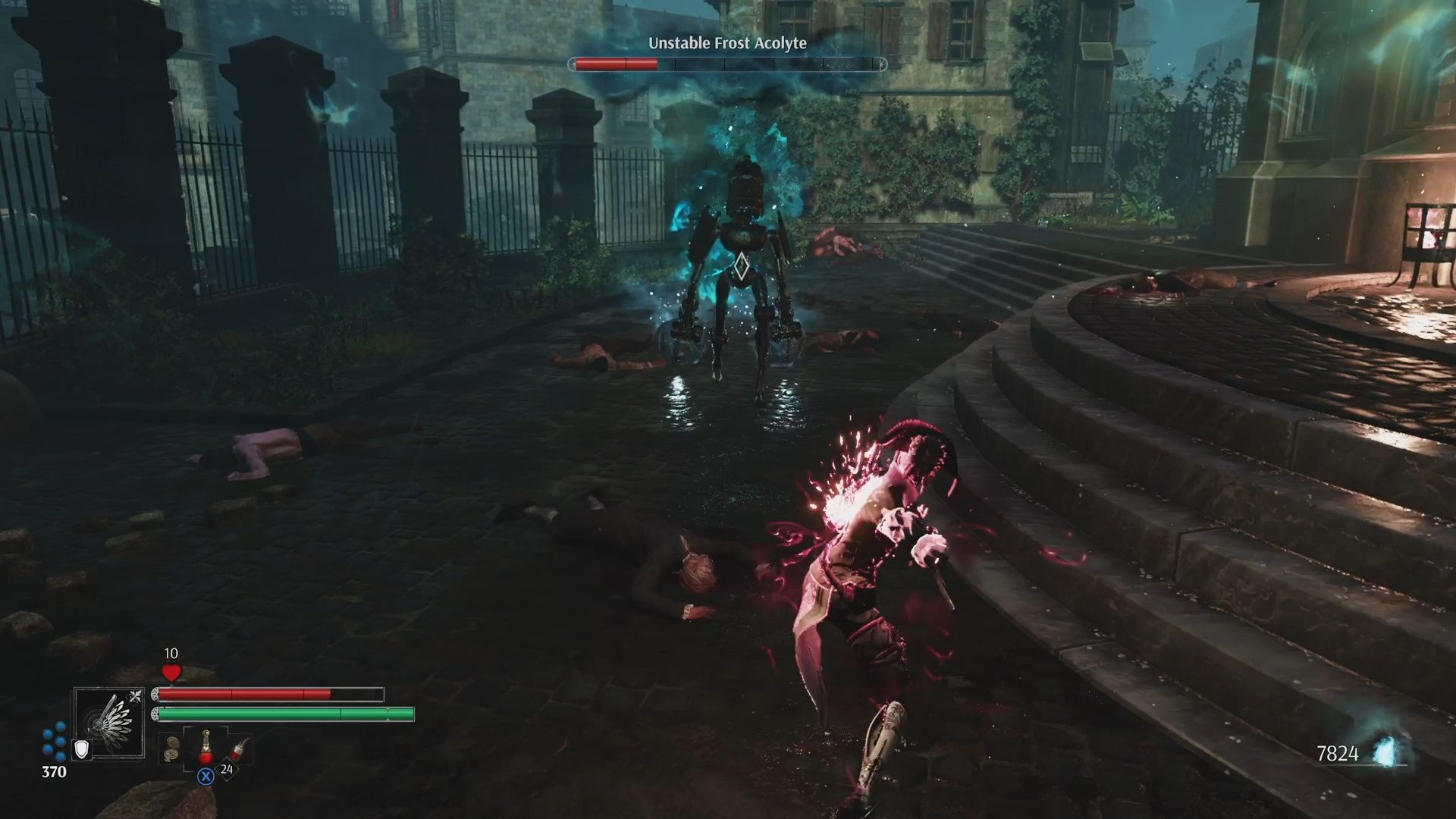 So… this is just the Ball-And-Chain Automat. The same one you have fought and killed dozens of times now. The Unstable Falcon was one thing; that wasn't an enemy you had fought dozens of times. At least the Unstable Frost Acolyte does seemingly have one new move. It is a back dash. Which doesn't really dramatically change the way you should approach this fight. So just do what you always do.

When the Unstable Frost Acolyte performs its spinning attack, stay out of range and then hit them with a charged attack when they are vulnerable. When they use their big vertical swings, dodge past them and land a heavy attack on their back. When they slam the iron balls together, remember that they will often follow this attack up with a second, quicker version. Just fight this Unstable Automat the way you fight the regular version. Once you clear the Unstable Frost Acolyte, activate the Vestal and claim all the items around the church (especially the memento sitting in front of the doors). 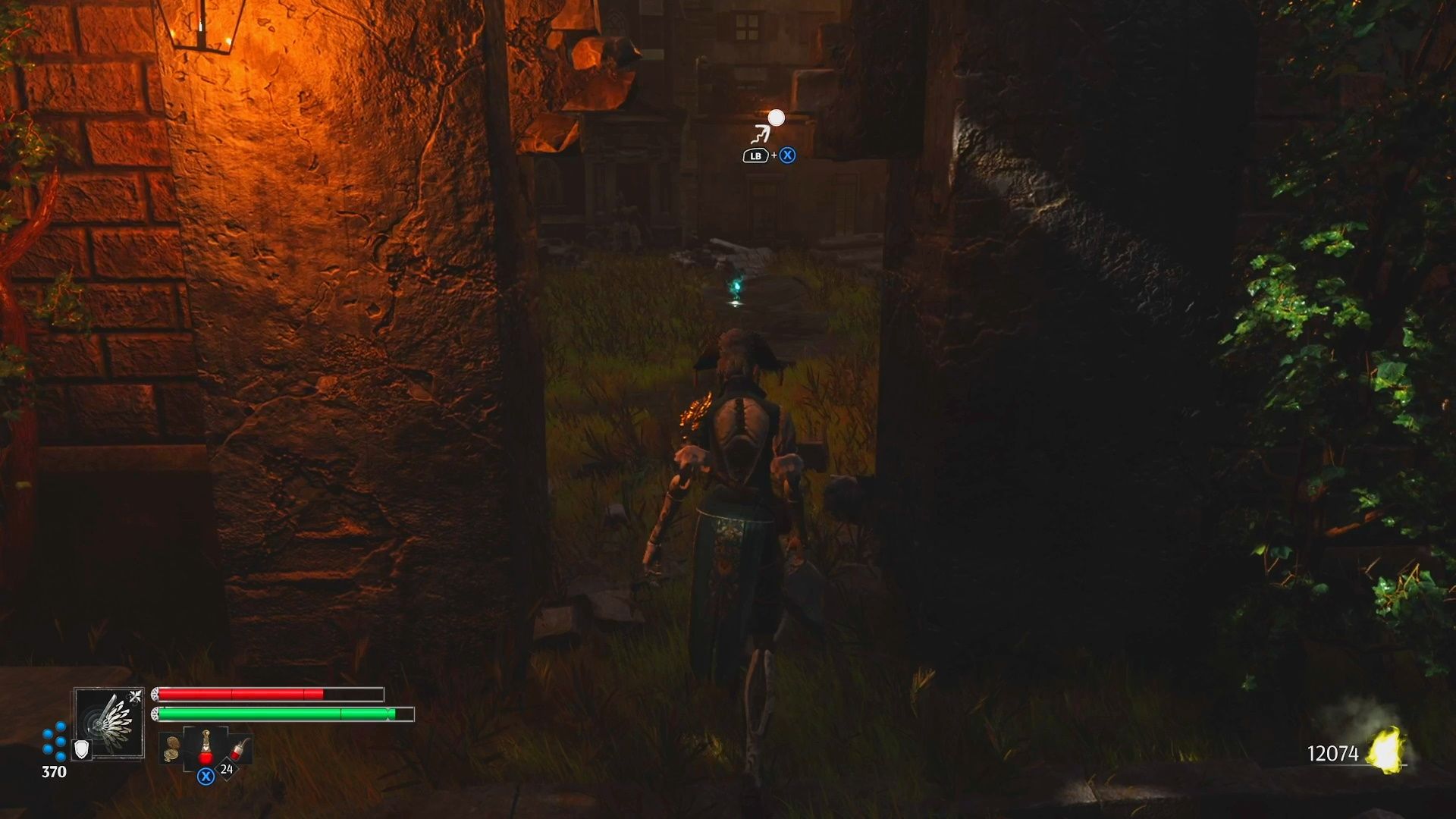 Back in the Faubourg, take the stairs down. On your left, there is a breakable wall. Knock it down, but prepare to be ambushed. There is a Pickaxe-Wielding Automat on your right. So, before you go grab the Alchemical Capsules shimmering in the middle of the stage, take that Automat out; their buddy will then try to fight you. Once you have killed the automats, grapple to the ledge above to obtain the Noble Spirit. Now, travel back through the hole in the wall, and down the stairs. 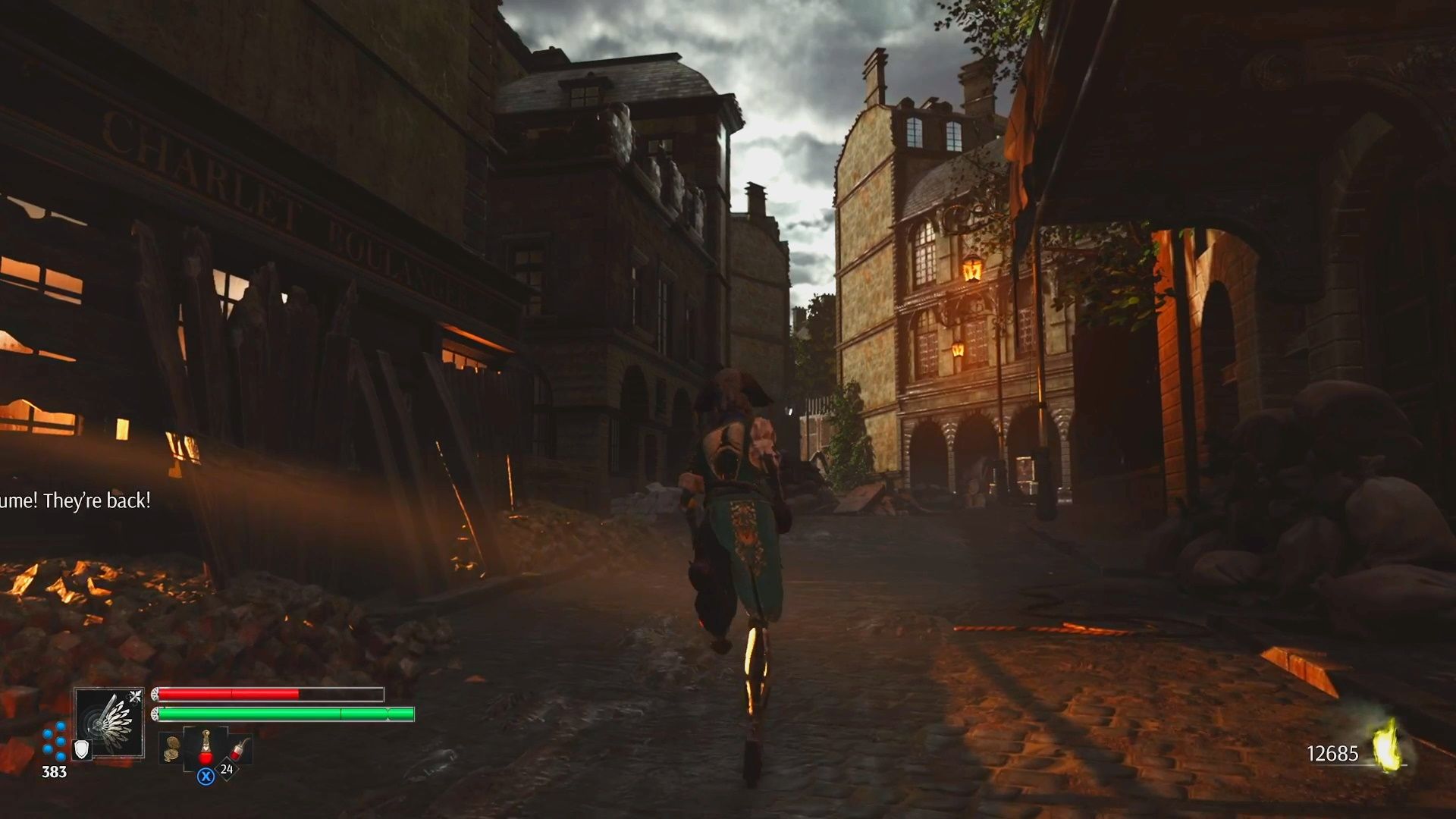 You can talk to more citizens here, but there isn't a quest to do or anything (at this moment, at least). You will also have another Pilliary Ram Automat to kill. Now, if you keep following the path, you will end up in the cemetery. Grab the Warrior Spirit sitting in front of a mausoleum, and kill the Ball-And-Chain Automat. Open the gate, and you will open up the church area where you fought the Unstable Frost Acolyte. 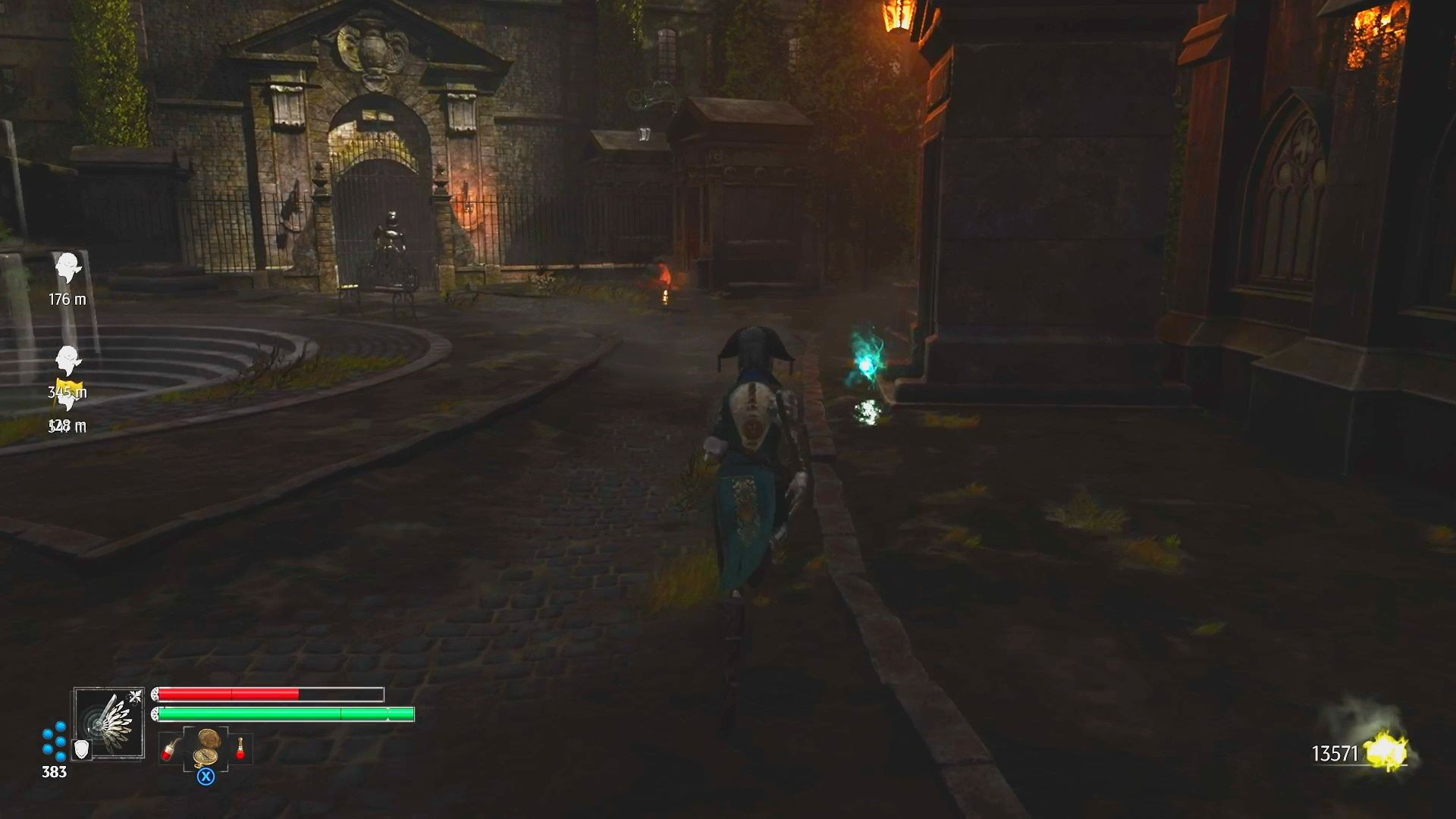 Go back down the steps that take you past that wall you broke through, but this time take a right. Now, hop up to the platform using your grappling hook. Air dash over the wall, drop down to the street below, and prepare to face a squad of three Automats. There will be a Standard Automat, a Pick-Axe Automat, and a Ball-And-Chain wielding Automat. Once you scrap them, grab all the items in the area, including a Noble Spirit. 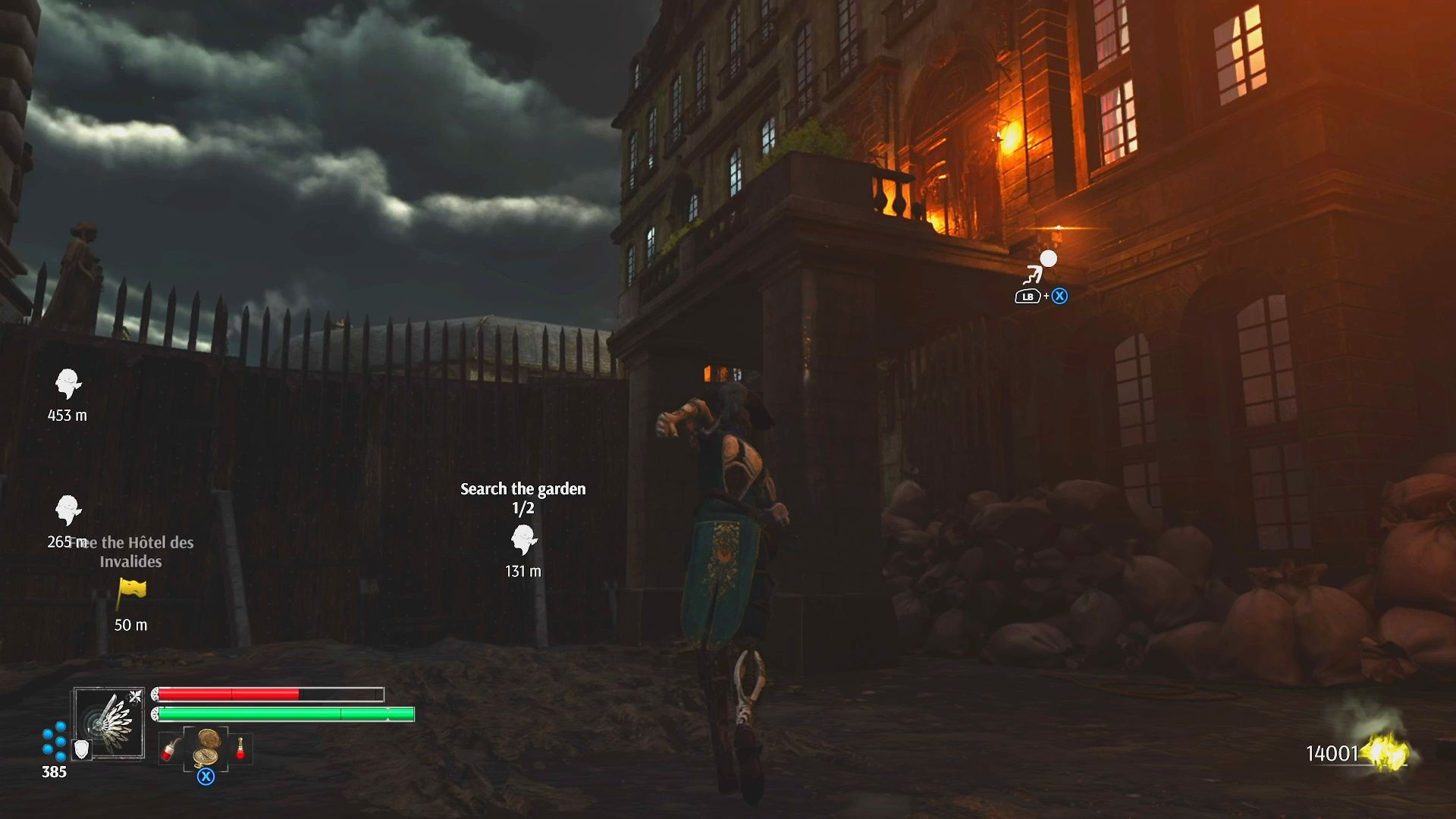 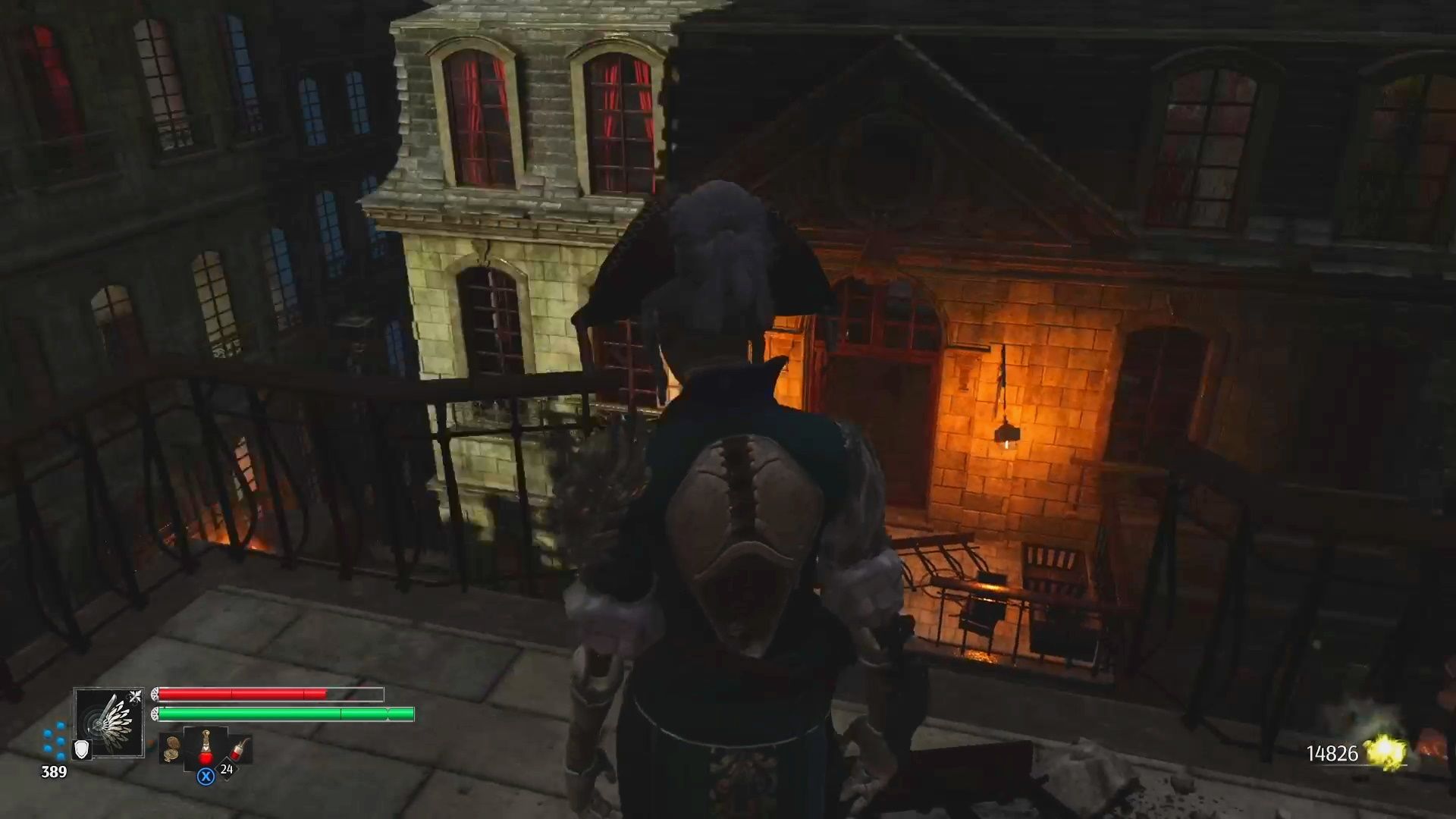 Near that Automat will be a house that has a balcony that you can reach by grappling hook. Grapple up there, and you will find a Module Key. Then, exit through the other balcony, perform an air dash on the balcony of the opposite building and then jump down to the street below. 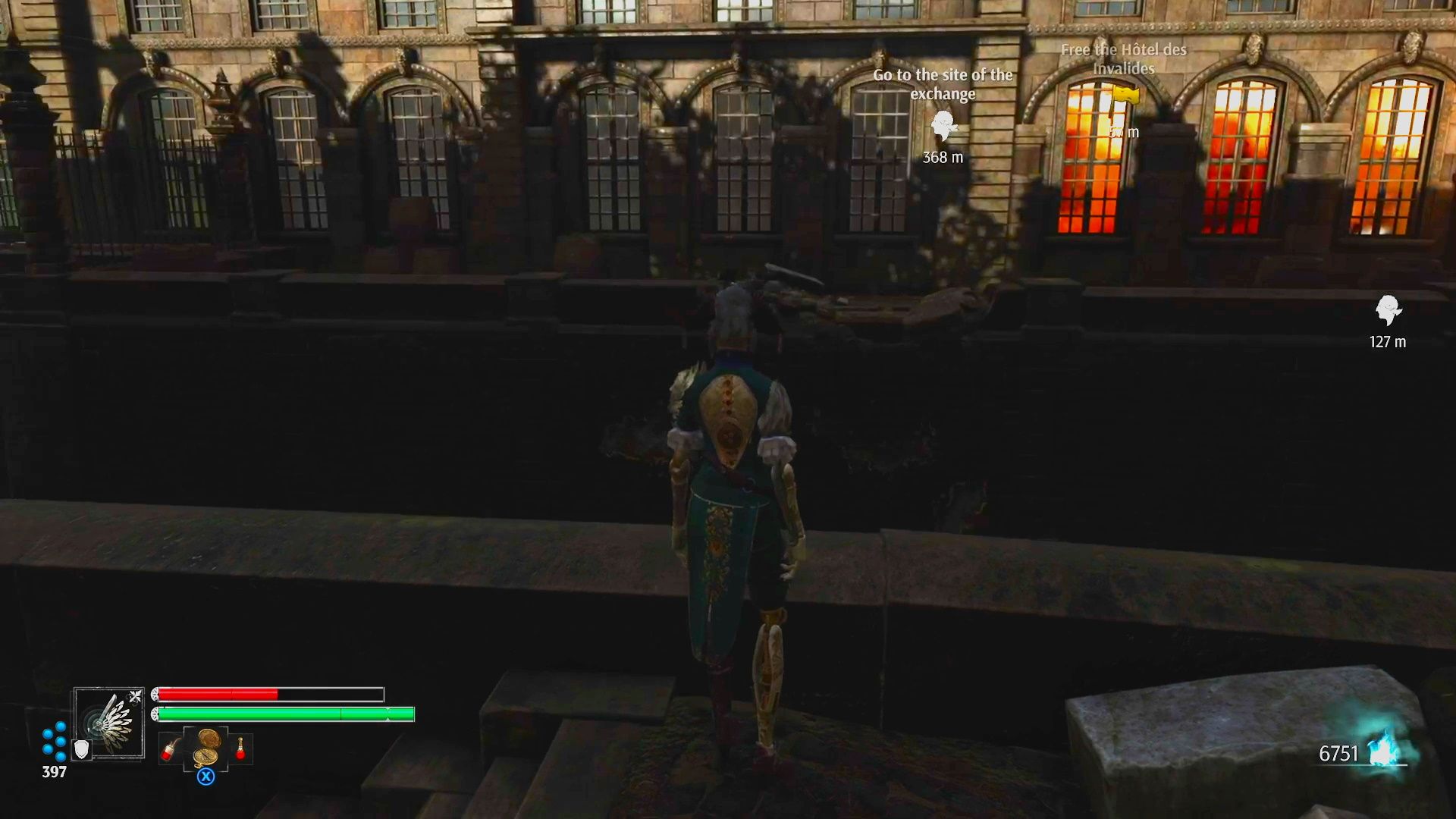 On one end of the street will be a downed Automat with Cast Iron on them; the other end will be patrolled by a Falcon-type Automat. Once you take out the Falcon, turn the corner and collect the Noble Spirit. Then air dash across the river. You have officially made it to the hotel. Prepare to fight The Treasurer of Les Invalides.