Having just worked our way through The Cite, we are off to The Tuileries. The difference between these two locations is immediately obvious, as this is clearly a place of opulence. Nonetheless, Steelrising's Automats clearly are not swayed by wealth, as they have taken over The Tuileries in the same manner as they did everywhere else.

Related: Steelrising: The Cite Part 2, Pont Au Change WalkthroughThere is a lot to cover here, as you are going to be weaving in and out of a number of areas in your quest through The Tuileries. It almost feels like you can't take two steps without entering into a new area, here. So, while we titled this guide as the "Quartier du Louvre", it really encompasses a half-dozen sections to work through. Needless to say, it can be pretty easy to get lost in these interwoven streets. Luckily, we are here to see you through it all. 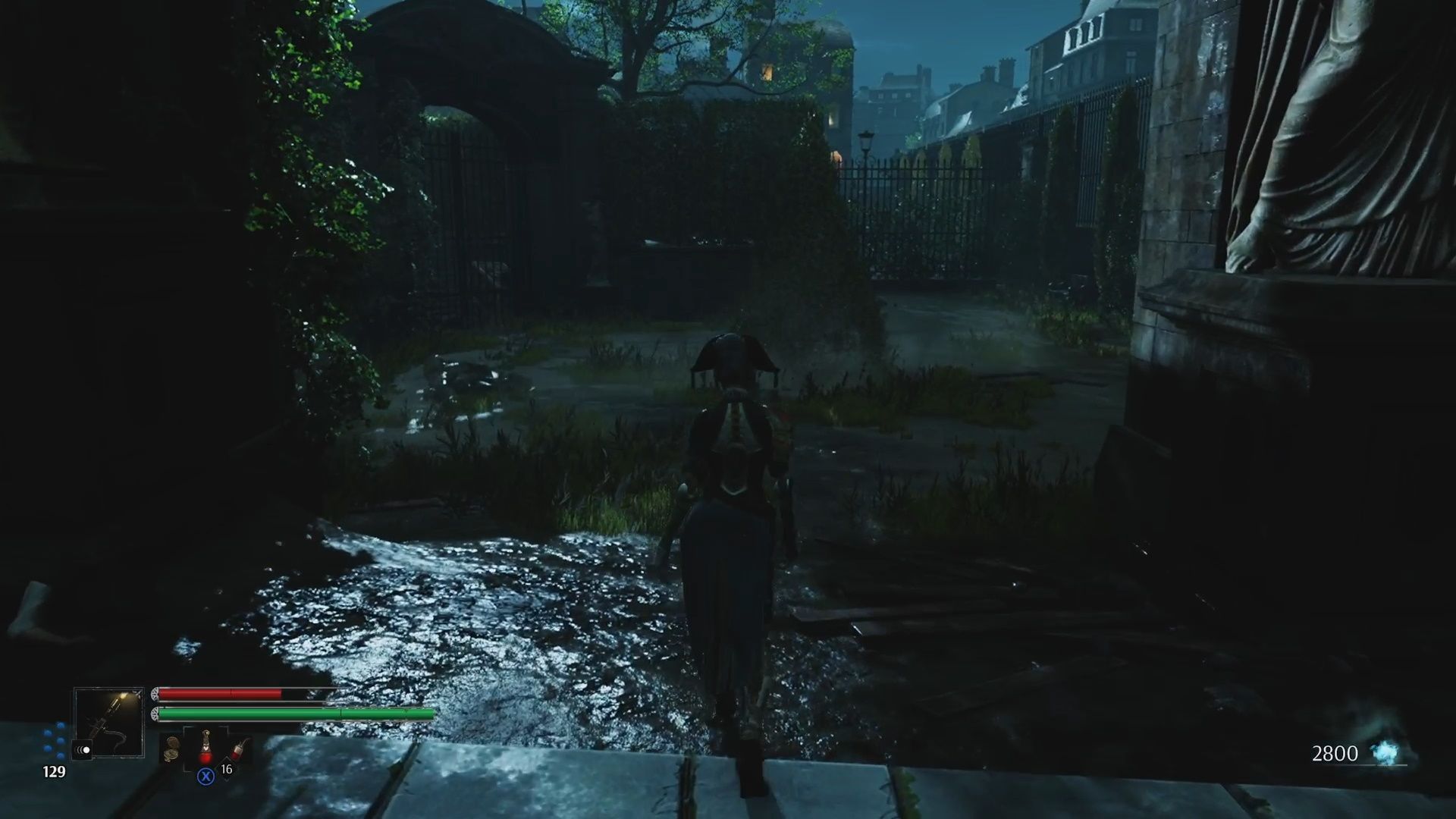 Before you start the level proper, you are going to want to look for stairs that lead you down to the docks. Down here, you will fight a single Fencer Automat. More importantly, though, is the treasure chest that rests at the end of the dock. It holds a Grade 2 Fulmination Resistance Module. Now head back up. 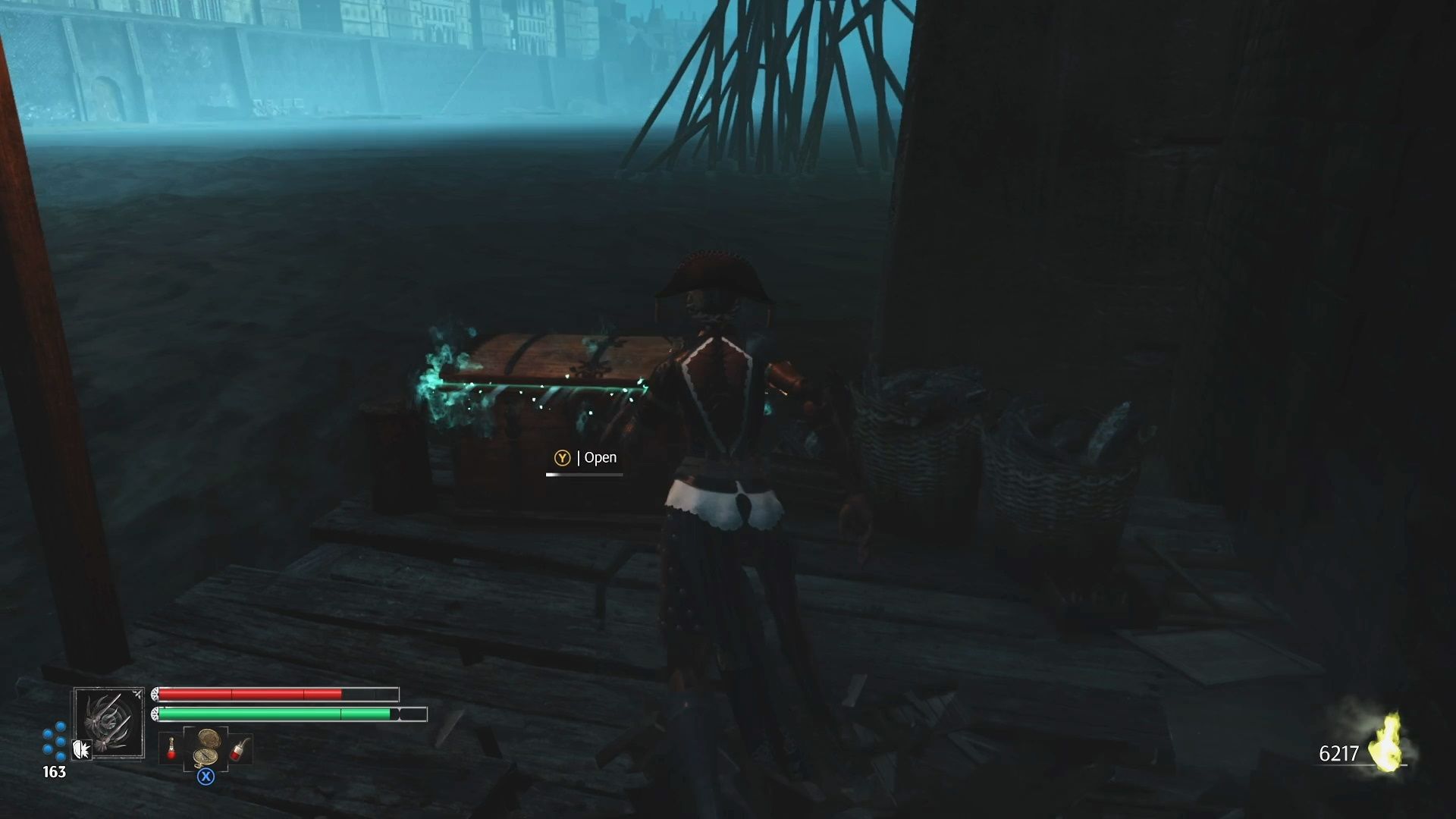 At the beginning of the stage you can choose to enter through the garden on the left, or you can use your grappling hook to enter the stage from the right and face off against two Forger Automats. The right-most path cuts off a bit of the garden and allows you to open up a shortcut. However, there are items to be found in both sections (nothing too impressive, just alchemical capsules, oil, and the like), so you are probably going to want to clear both out. 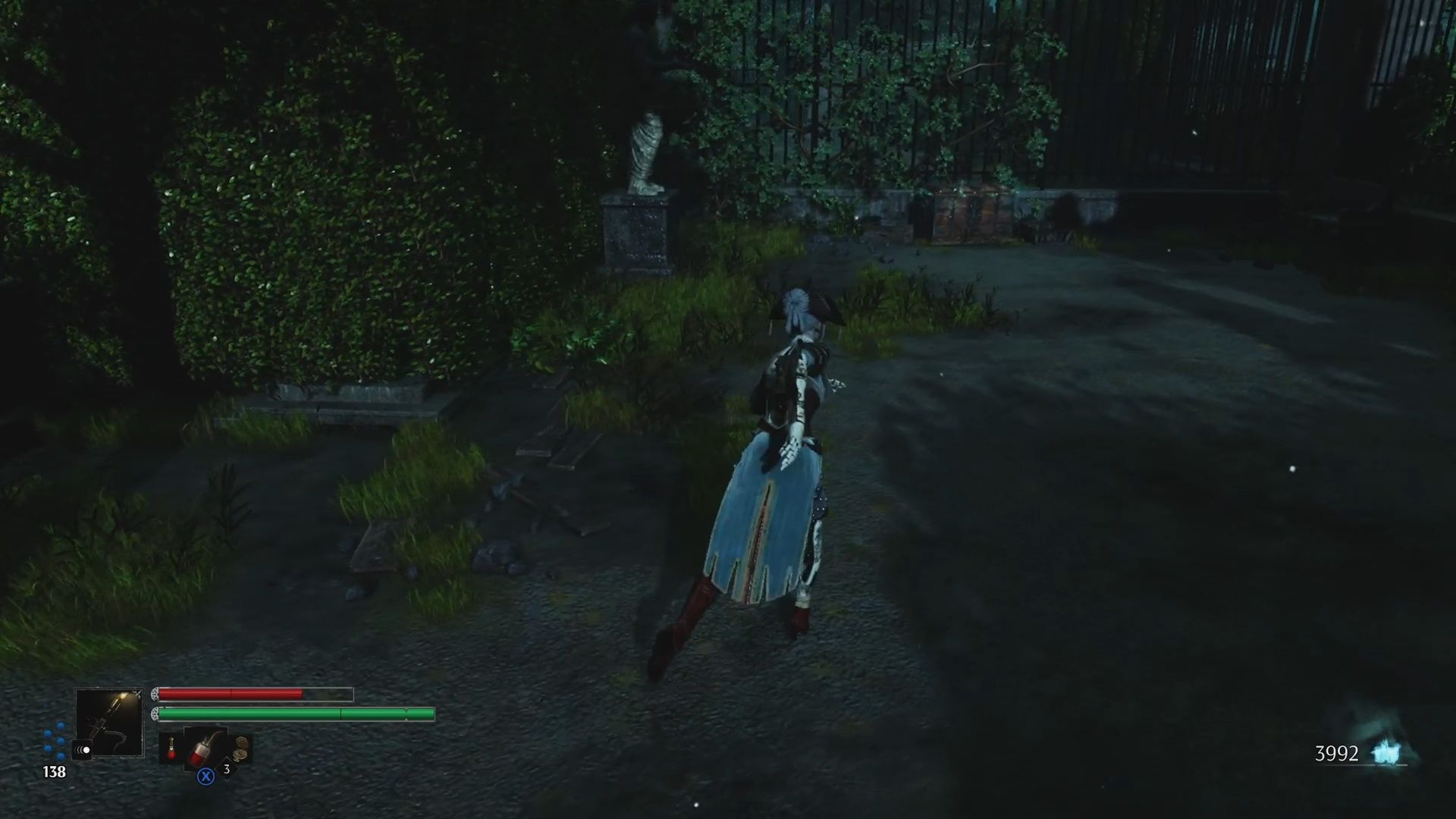 The garden is a maze of shrubbery. You will be facing off against lancers, blacksmiths, and snake Automats. All of them will be equipped with electricity-infused attacks. In the back corner of the garden maze is a chest that holds a module key, so don’t leave until you grab that. 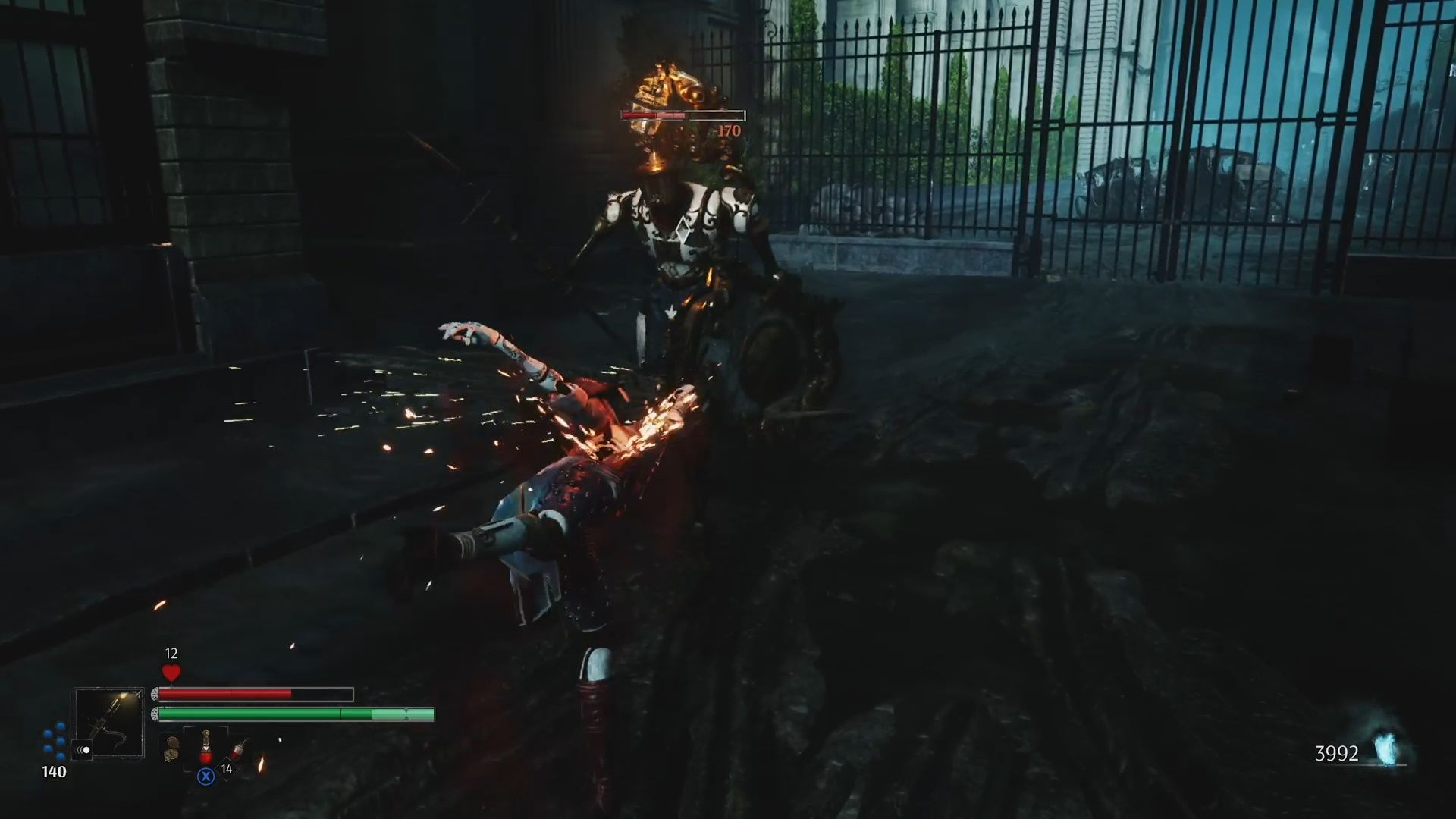 Once you leave The Gardens you are going to go toe-to-toe with a new enemy type. They are, functionally, the same as the Lancer-type, but they also come rocking a shield, which will deflect any attack you throw at it. Just circle the Shielded Lancer and strike when the shield is down. There’ll be plenty more of ‘em. 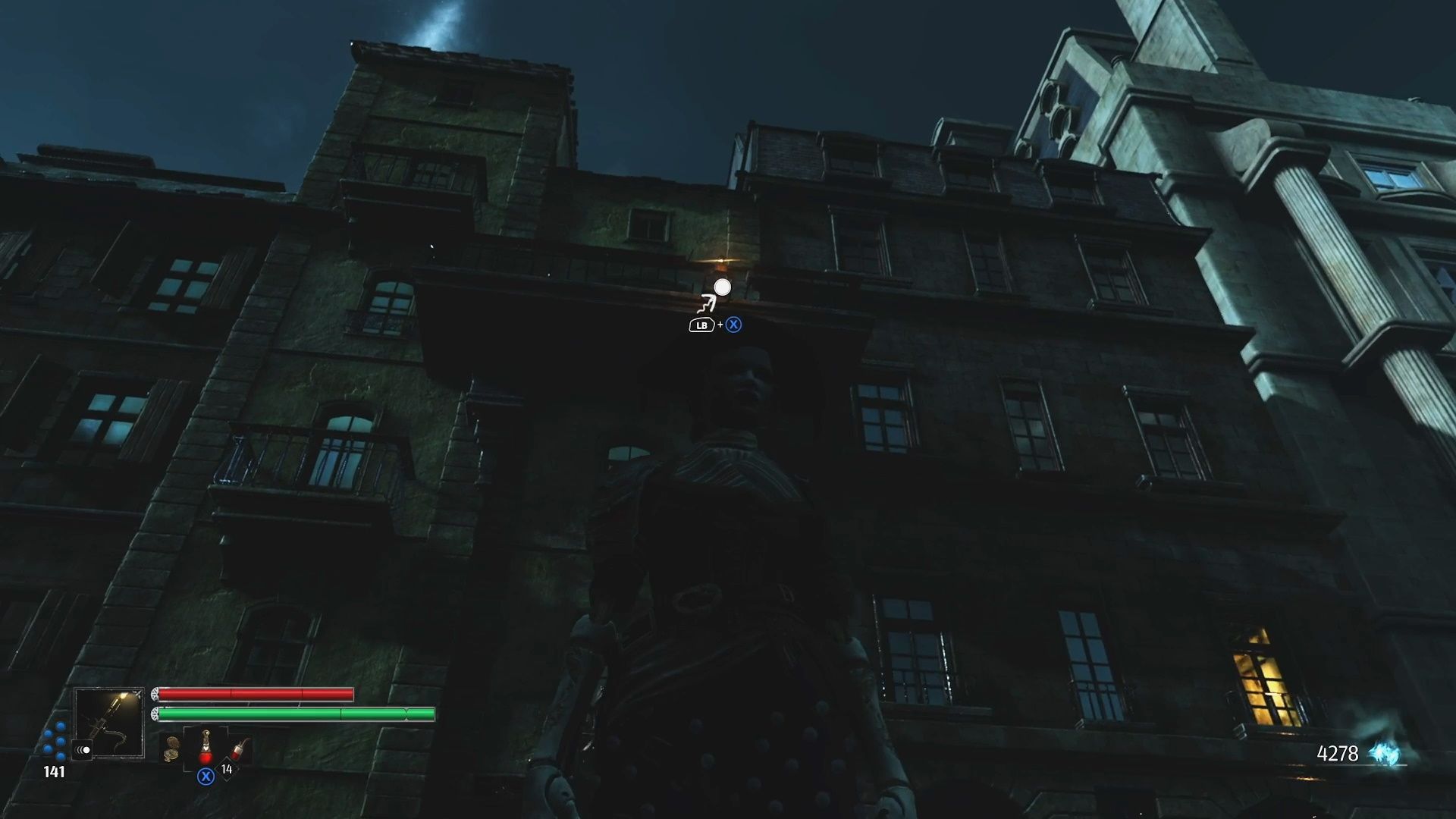 Now, you will be heading into the Labrinthine streets of Quartier du Louvre. Before you do: look up. There is a balcony above. Get up there and grab some goodies. This way will allow you to skip some of the enemies in the early area as well (though, once again, you will probably want to circle back and collect all the goodies you would otherwise miss).

Eventually, you’ll run out of space and have to hop down to street level. After jumping down, you will open a set of locked doors and encounter two patrolling Panther Automats. Take them out and head down the stairs to your left, you will now be entering the Rue Saint-Honore area 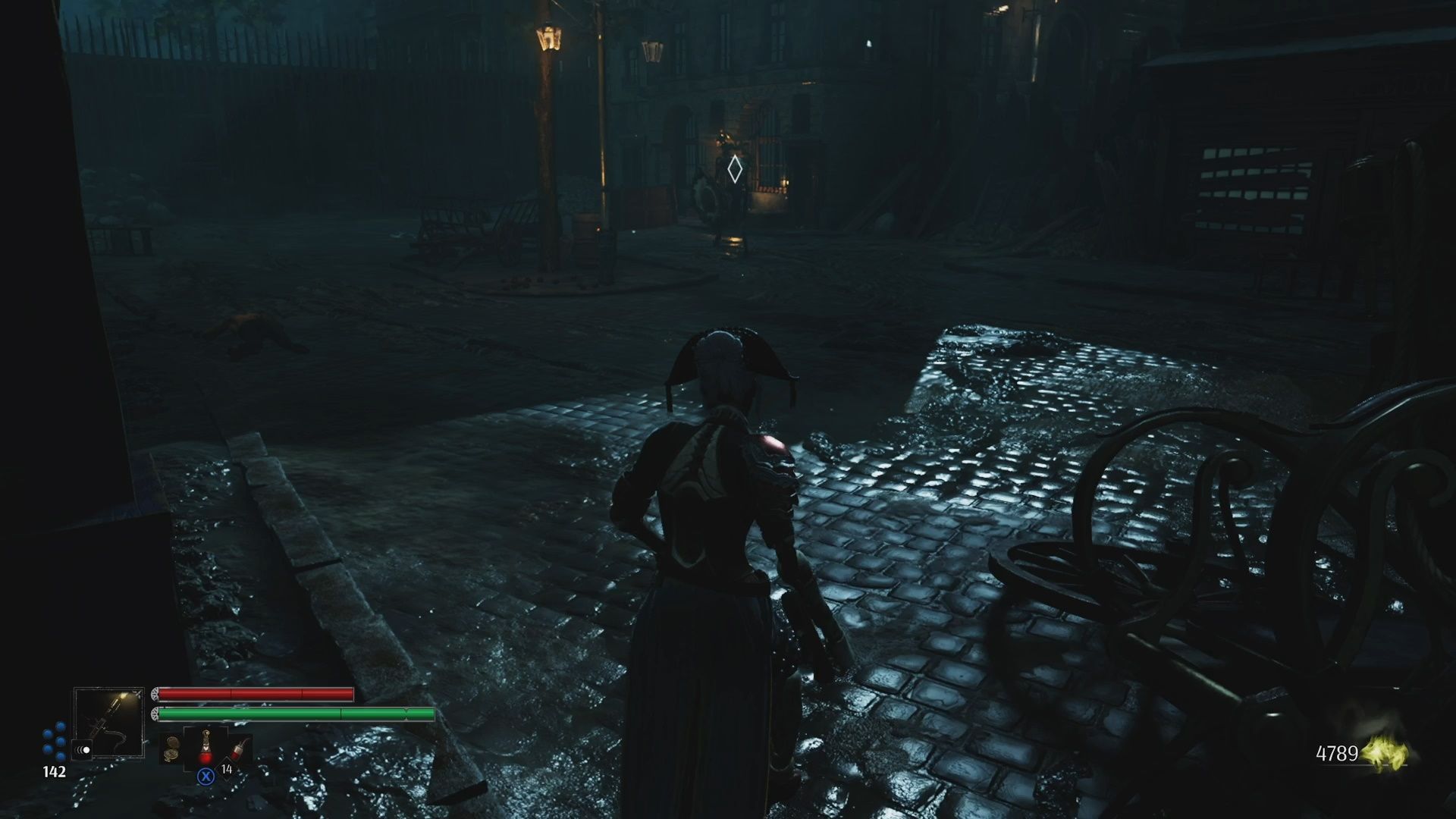 If you aren’t careful, you will end up fighting two of the Sheild-Weilding Automats. So, make sure to divide and conquer. There is a citizen side-quest in this area. To the right of the stairs, there is a surgeon who needs tools. Interact with him through the door. You will be able to clear this quest after you have beaten The Tuileries Titan. Now, clear out the Lancer at the top of the stairs. And you will not enter the Quartier de Saint-Eustache 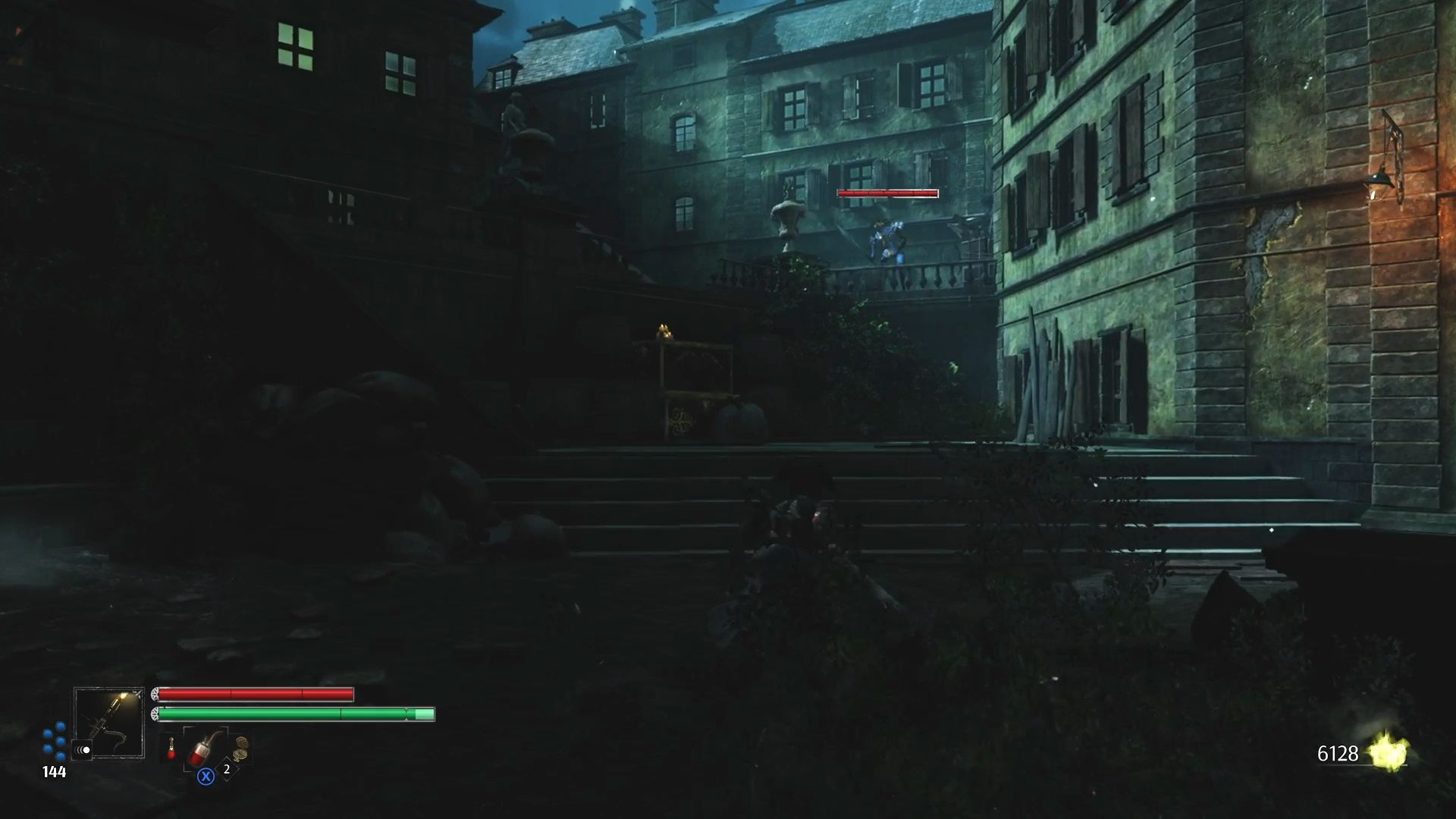 Hop up on the debris, and jump over to the balcony. Now, after moving through the abandoned apartment, jump down and face off against a Ball-And-Chain Automat, Shield-Weilding Automat, and two Lancer-type Automats. Engage them in the alley beside the courtyard so that you don’t have to deal with the projectiles. Make sure to open the chest and get the Lavoisier Catalyst. Head up the stairs and activate the Vestal. Now, move up the stairs and enter the Monsieur de Mirabeau’s Townhouse

Enter the house, and interact with Mirabeau. Once you are finished, head around back and open the chest. You will acquire the Leda Halberd. Now go back to the Vestal and head back into the Quartier de Saint-Eustache again. 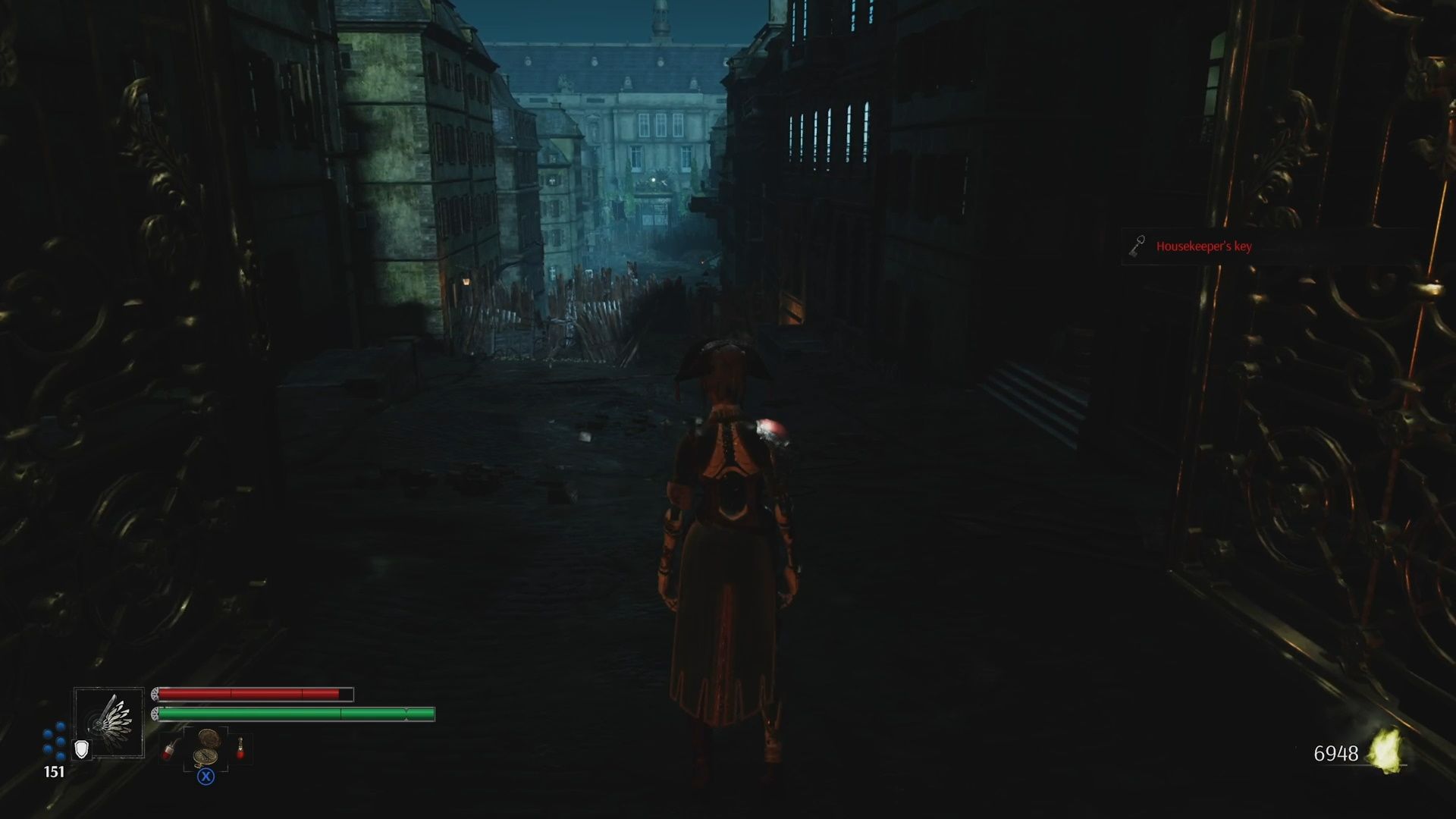 Now, once you are back at the Vestal, head to the giant golden gates. Use the key Mirabeau gave you. Head down the street, and take a left to fight more Automats. Including a new giant, Club-Weidling Automat. These guys seem scary at first, but they frequently use a two-hit combo that leaves them off balance. When they do this, follow up with a charged attack.

Clear out the enemies and loot this courtyard, but watch out, one of those sneaky Snake Automats are hiding in the shadows. Now, hop over the debris in the archway and take a right. There are some citizens you can interact with here. 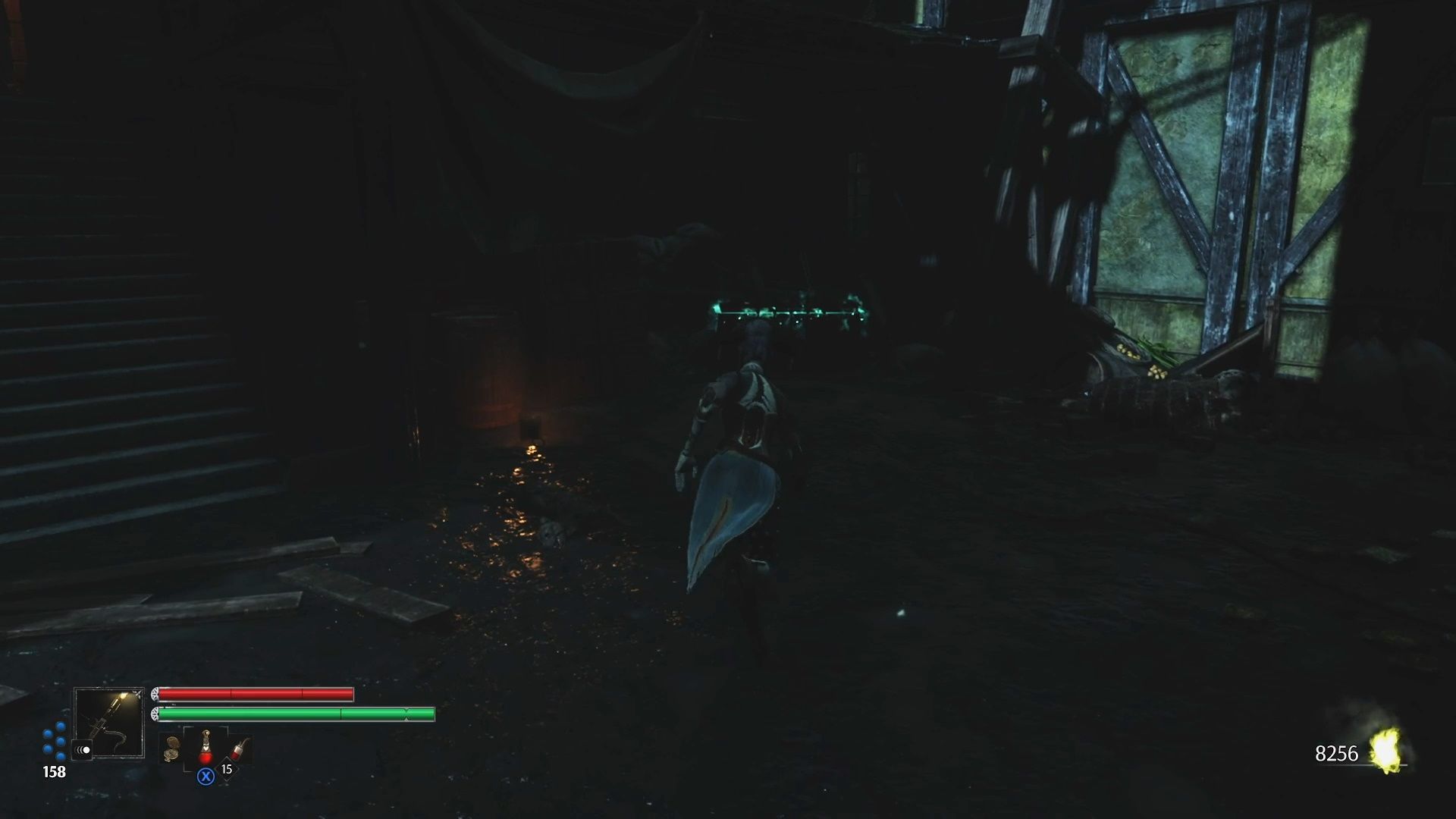 Head through a doorway and fight a Sheild-Wielding Automat and a Fencing Automat. There is another chest in this area, it contains the Nemesis Fans. Continue until you reach the street, and you will end up in the Rue Saint-Honore. 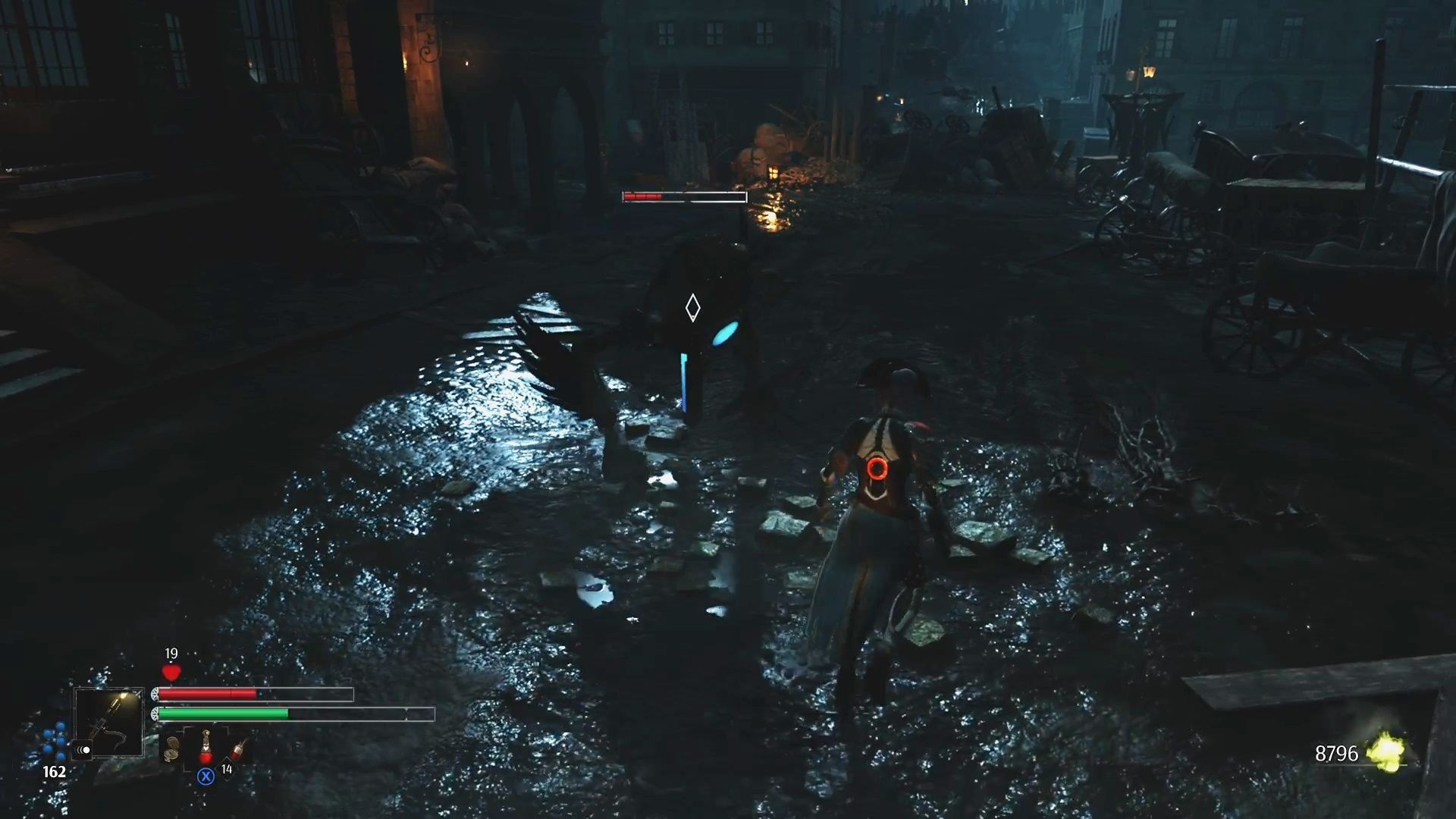 Here you are going to run into a new Automat type. It is a lot like the Lunging Automats you fought in The Cite, but instead of having a self-destruct attack, it will jump up and plunge its lower body (which is a spike) into the ground. Thus, we shall name this Automat the Plunging Automat. Generally, you will deal with them the same way you dealt with their Lunging cousins, just without the fear of their self-destruct attack. 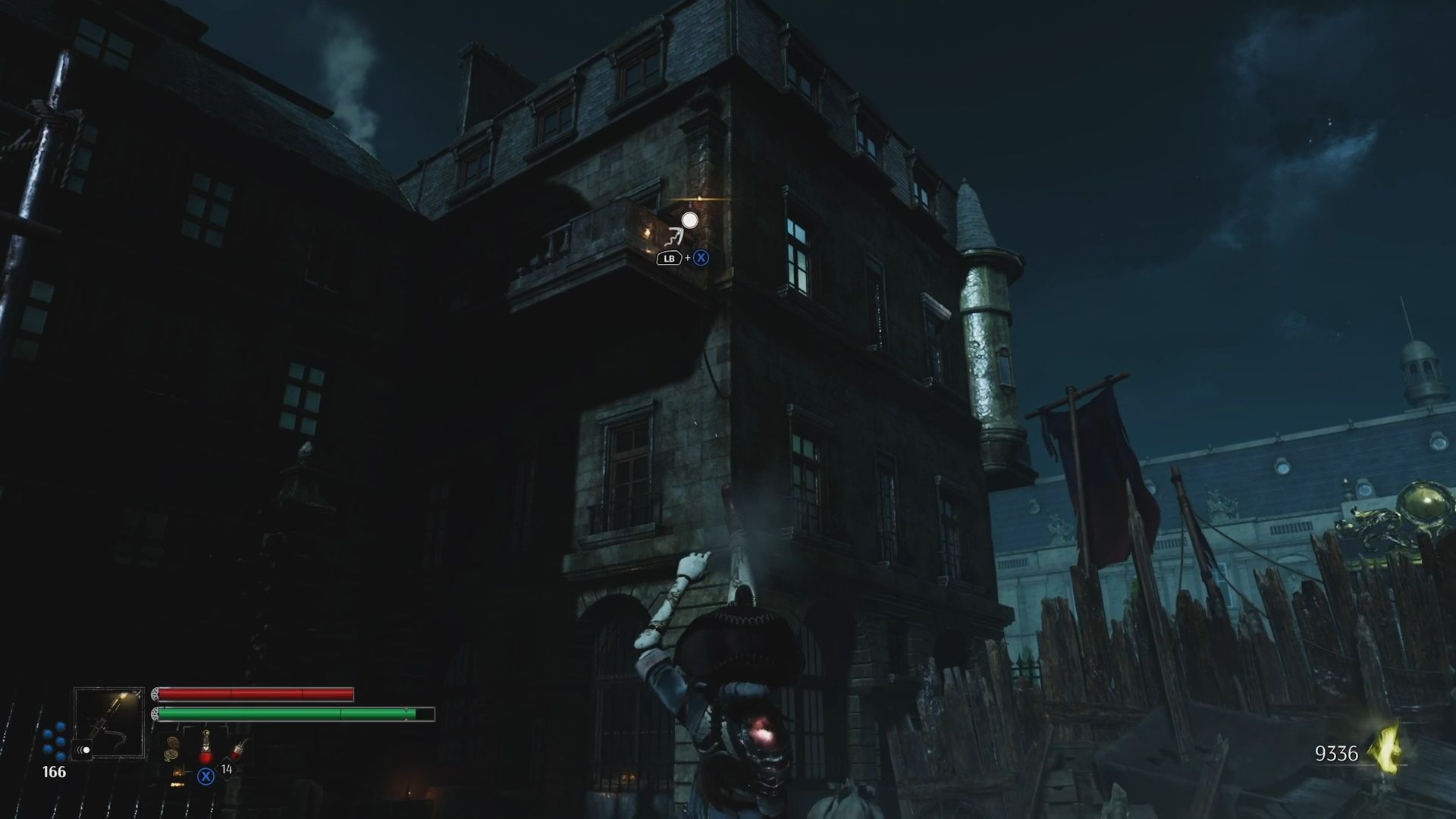 Clear out the lunging automata in this area (there will be two of them). Follow the street all the way down, and look for a partially fenced-in area to your left. There is a treasure chest here that contains a Grade 2 Longevity Module. However, watch out; there is a Fencing Automat hidden in the shadows. Now, look up, you will see a grappling point. Grapple up to the balcony above and move through the apartment. Drop down to the street below, and you will now be in The Louvre Gardens. 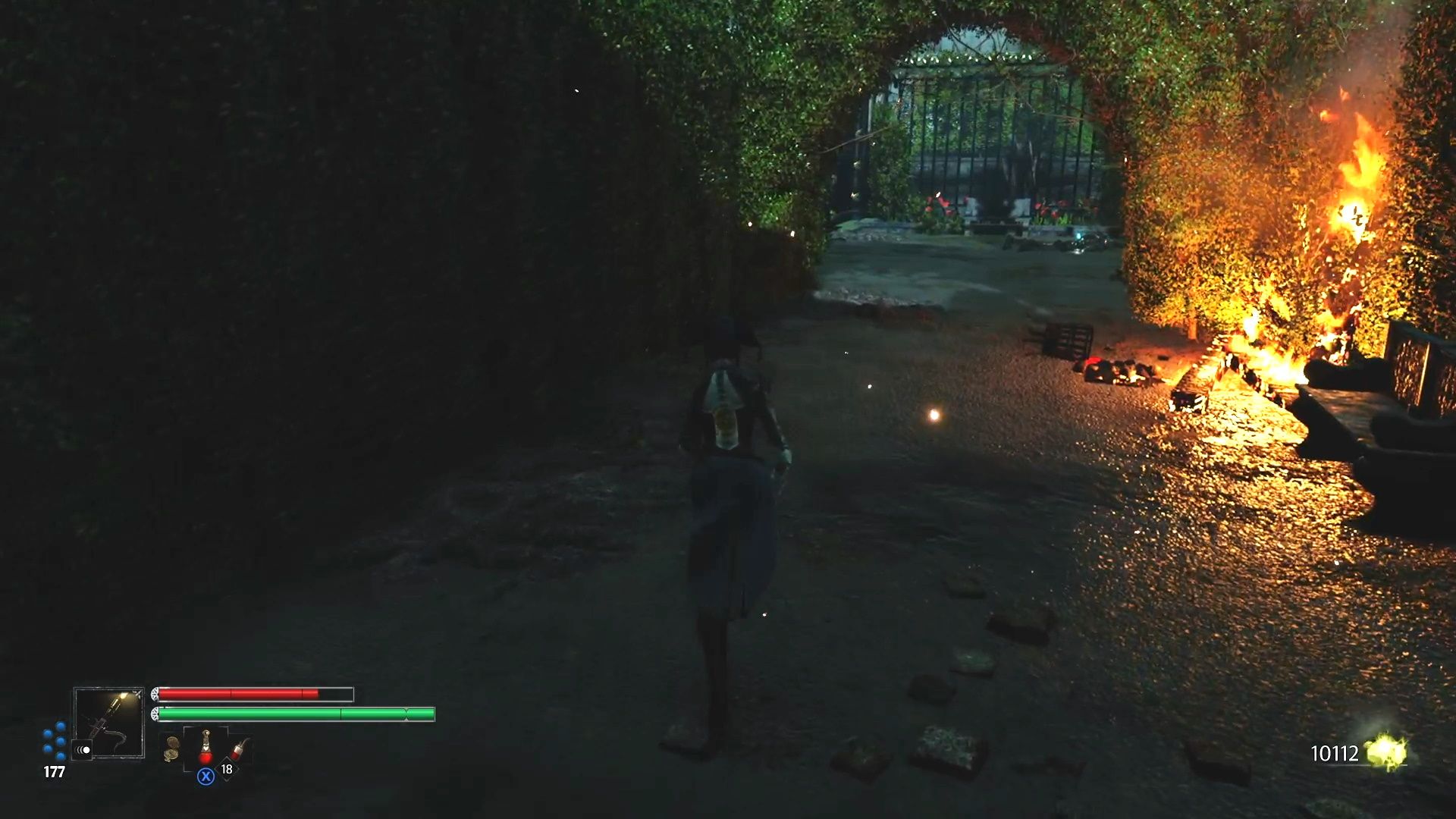 The first thing you need to do is take out the Panther Automats and the Plunging Automat. You won't be able to enter in through the main gate, but luckily there is a giant hole in the gate on the left side. Enter this hole, and you will encounter the Trumper-Playing Automat. These guys aren't particularly tough. They only have a few attacks which consist of trying to bludgeon you with their trumpet and using the trumpet to blow you away. However, they don't have much health, and they stagger easily. So an aggressive approach will serve you well.

Now, head further into the gardens and you will find a Vestal. Once you activate it, hop over the shrubs, and follow the path into a clearing. Here you will find one of those Trumpet playing Automats, and a Ball-And-Chain Automat. There is also a Lancer who will be firing their cannon at you. Once you have taken them all out, go grab the nearby chest and obtain the Grand Veneur Tricorn and Coat. 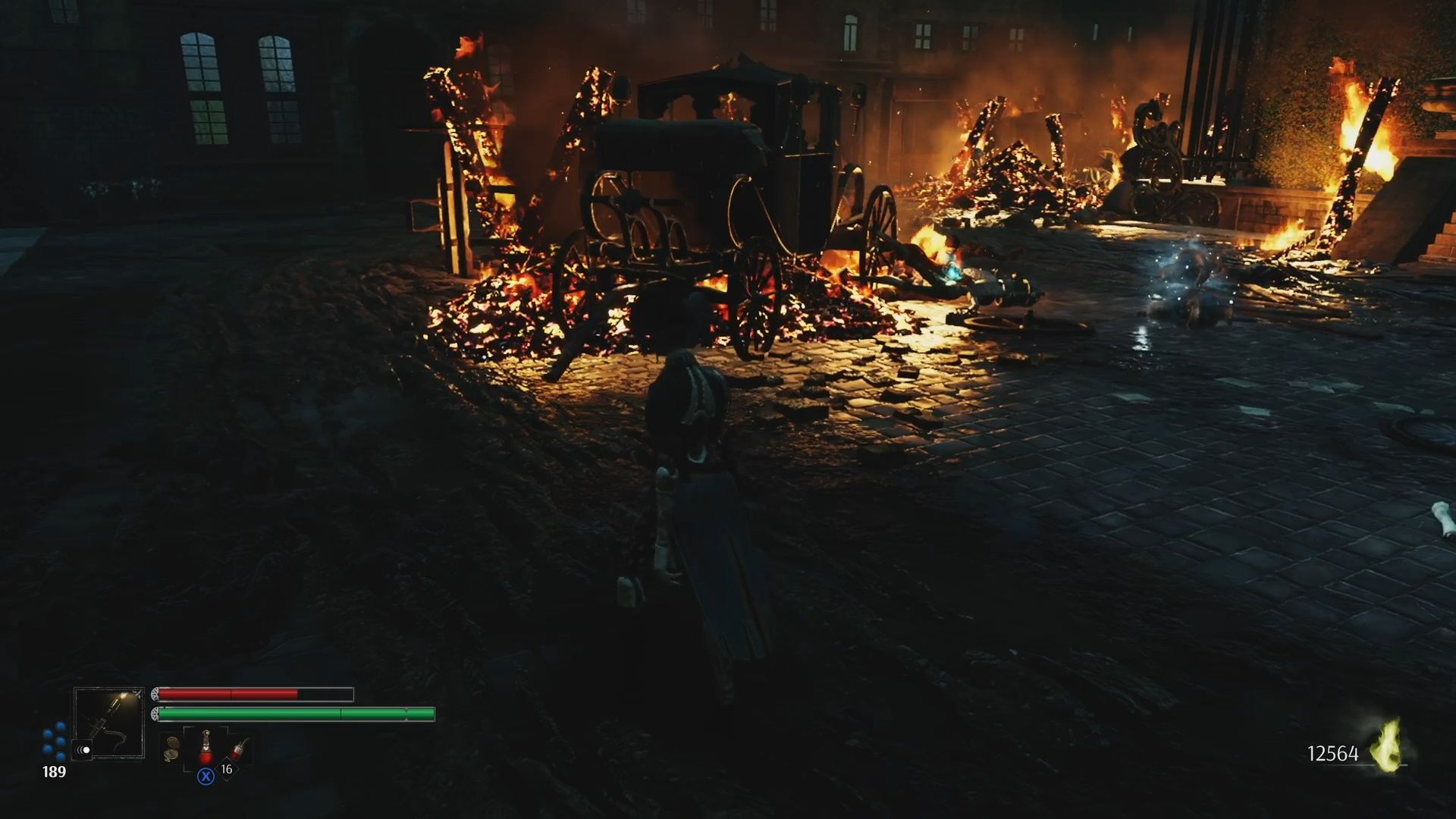 Now work your way through the gardens. There will be a Fencer, another Ball-And-Chain Automat, and a few Trumpet-Playing Automats, but you will encounter them all one on one, so they aren't much of a threat. The garden will eventually spill out onto the street. There will be a Lancer standing on the gallows. Once you dismantle them, look for a chest hidden in the back corner near the flaming buggy. But watch out, there is a variant of the Butcher Automat back here as well. It only has a few clumsy swings, and shouldn't pose too much of a threat. Open the chest and grab the Module Key. 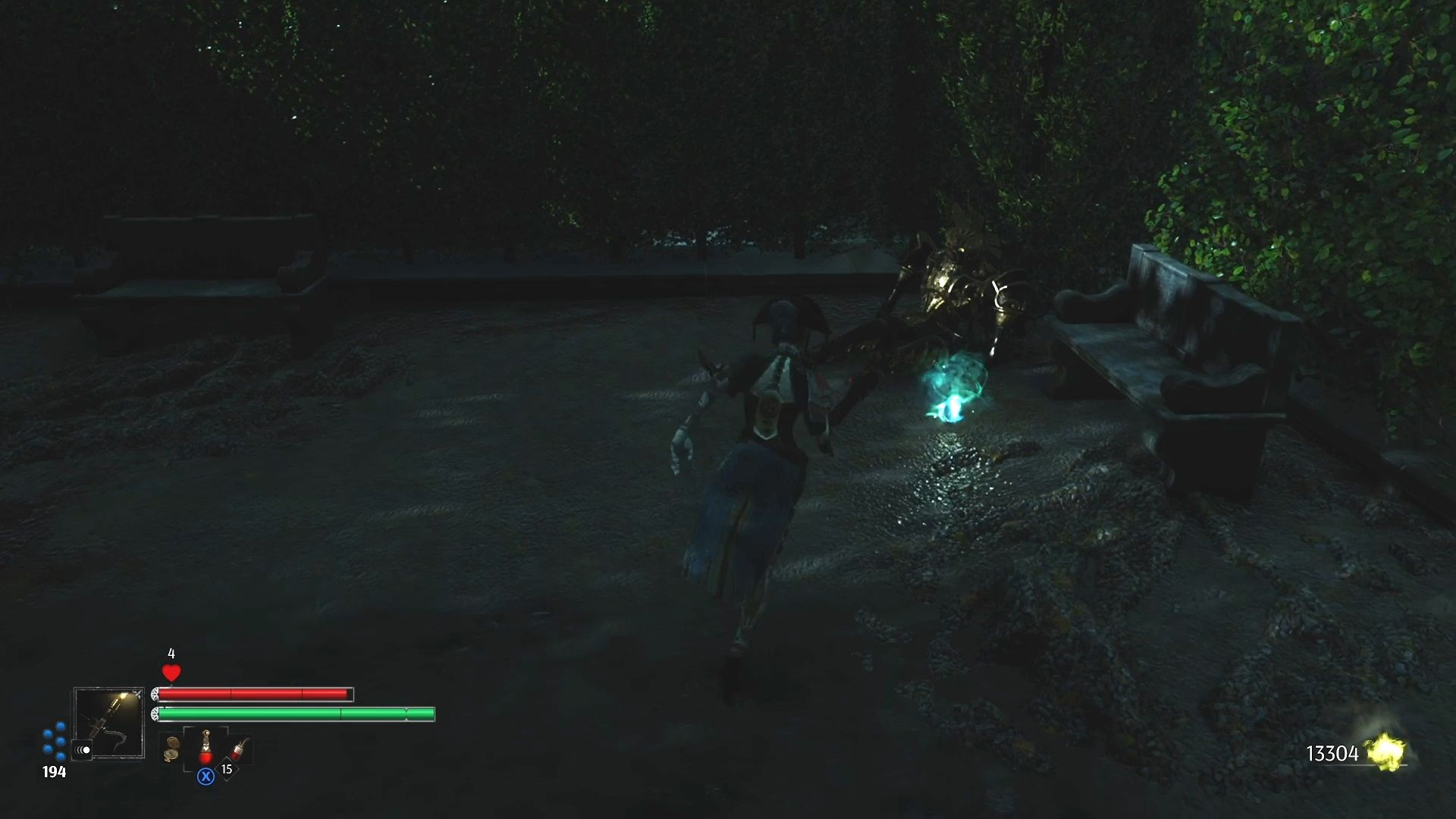 Run back to the gallows, look up, and grapple to the platform above. Jump down, take out the Plunging Automat, and you will find a Grade 3 Long Infusion Module lying near a downed Automat. Head to the giant building. To your right, there is an open door, but before you enter it, hop over the shrub beside the gate, take out the two Trumpet-Playing Automats, and open the gate (this opens up a quick path to the Vestal). Now, turn back around, enter the door from before, and prepare to face the Unstable Statuary Ram. 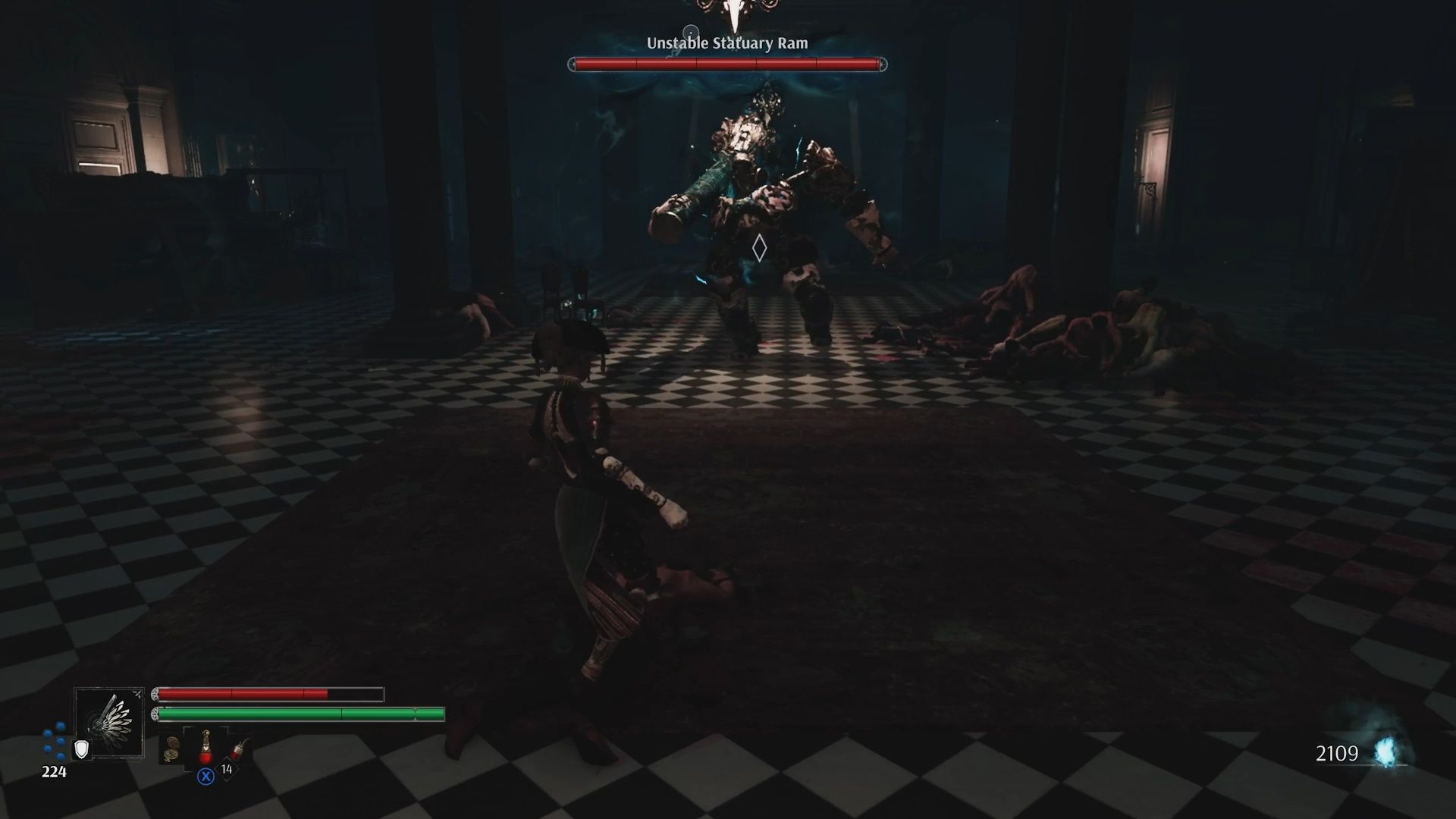 Despite being pretty deep into the game at this point, the truth is, this Unstable Automat is pretty simple. This boss is slow, lumbering, and all their attacks are heavily telegraphed. The Unstable Statuary Ram has one combo where they will slam their pillar into the ground twice before extending the pillar outward for the third hit. You can just circle them when they use this attack and land a charged attack on their back. 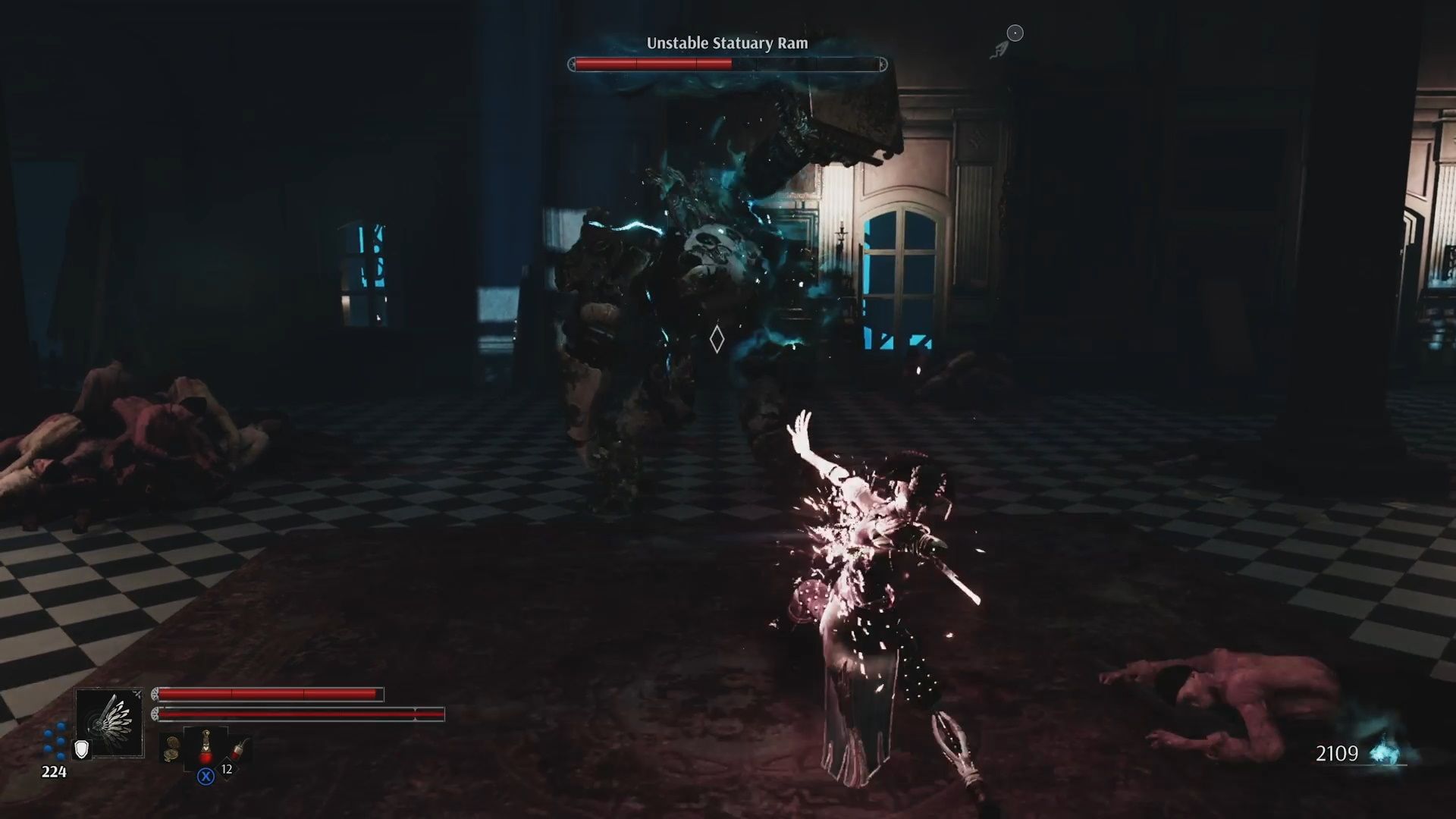 Another attack they will use sees them try to ram you with their pillar before stumbling forward and slamming the pillar on the ground. As long as you dodge the second attack, you have an opportunity to land a fully charged attack. Finally, the Unstable Statuary Ram's final attack is to leap forward and slam their pillar down on you. This move covers a lot of range, and the Unstable Statuary Ram will typically only perform it if you are pretty far away. However, while it is powerful and moderately quick, you can just dodge to the side to avoid it. 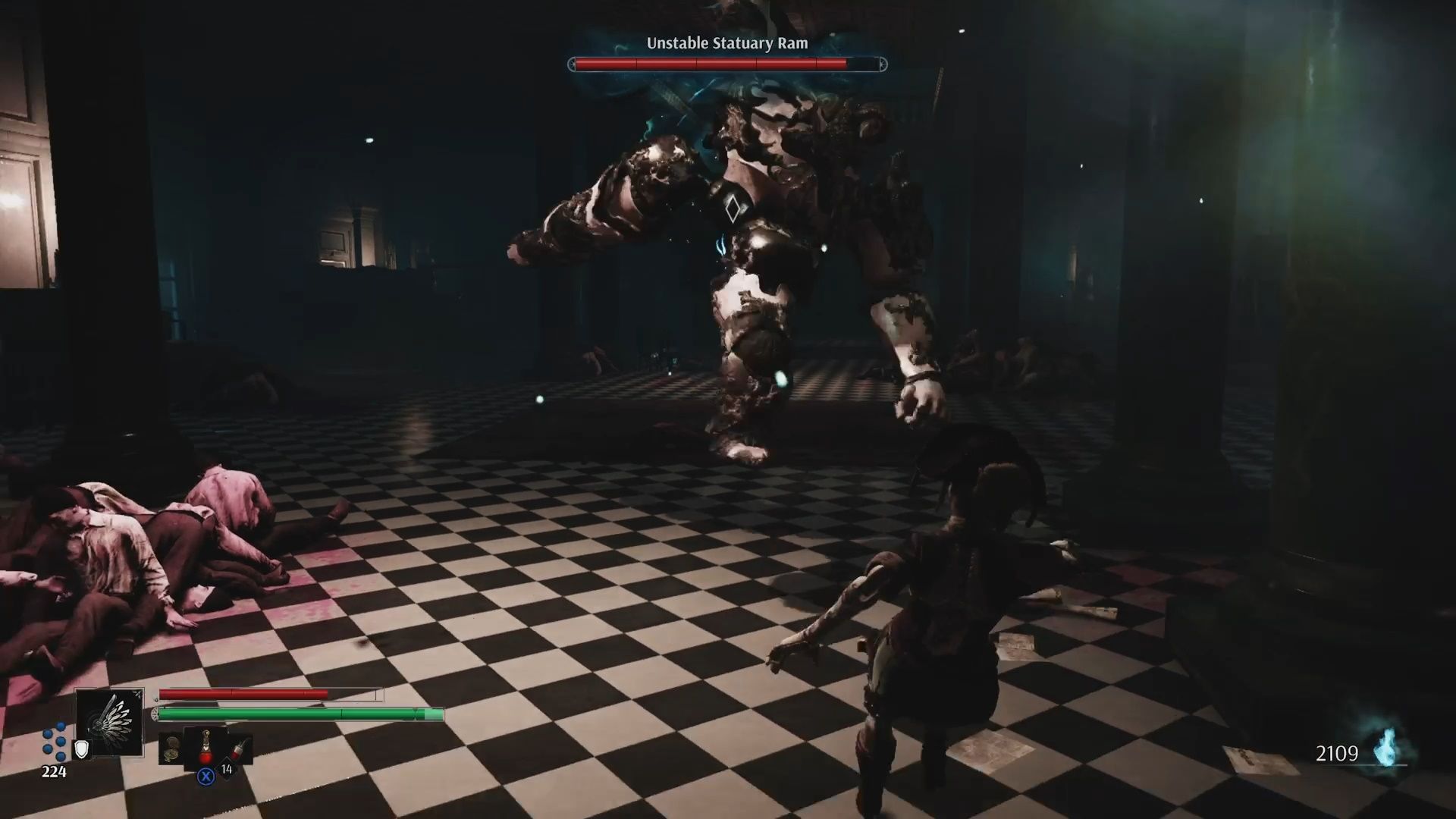 The one gimmick that the Unstable Statuary Ram has going for it is that you cannot stagger it with a fully charged attack from a hard-hitting weapon. Few Steelrising bosses can say the same! Still, considering how incredibly slow they are, and how many opportunities they give you to attack their back, it is safe to say that they aren't likely to be a challenge once players familiarize themselves with its moves.