You spend most of the Saints Row reboot in combat. After all, most missions and plenty of side hustles involve you fighting a bunch of people, whether a rival faction or the police. And rarely do you just face one or two enemies. You're usually up against a large group of them. So, it's best to be well-equipped with an arsenal of good weapons.

However, this is Saints Row, so the deadliness of a gun isn't the only thing that determines its greatness. It's also good to use some of the wild and wonderful weaponry as they're more fun. So, taking into account both a weapon's effectiveness and creativity, these are the best ones in the game. 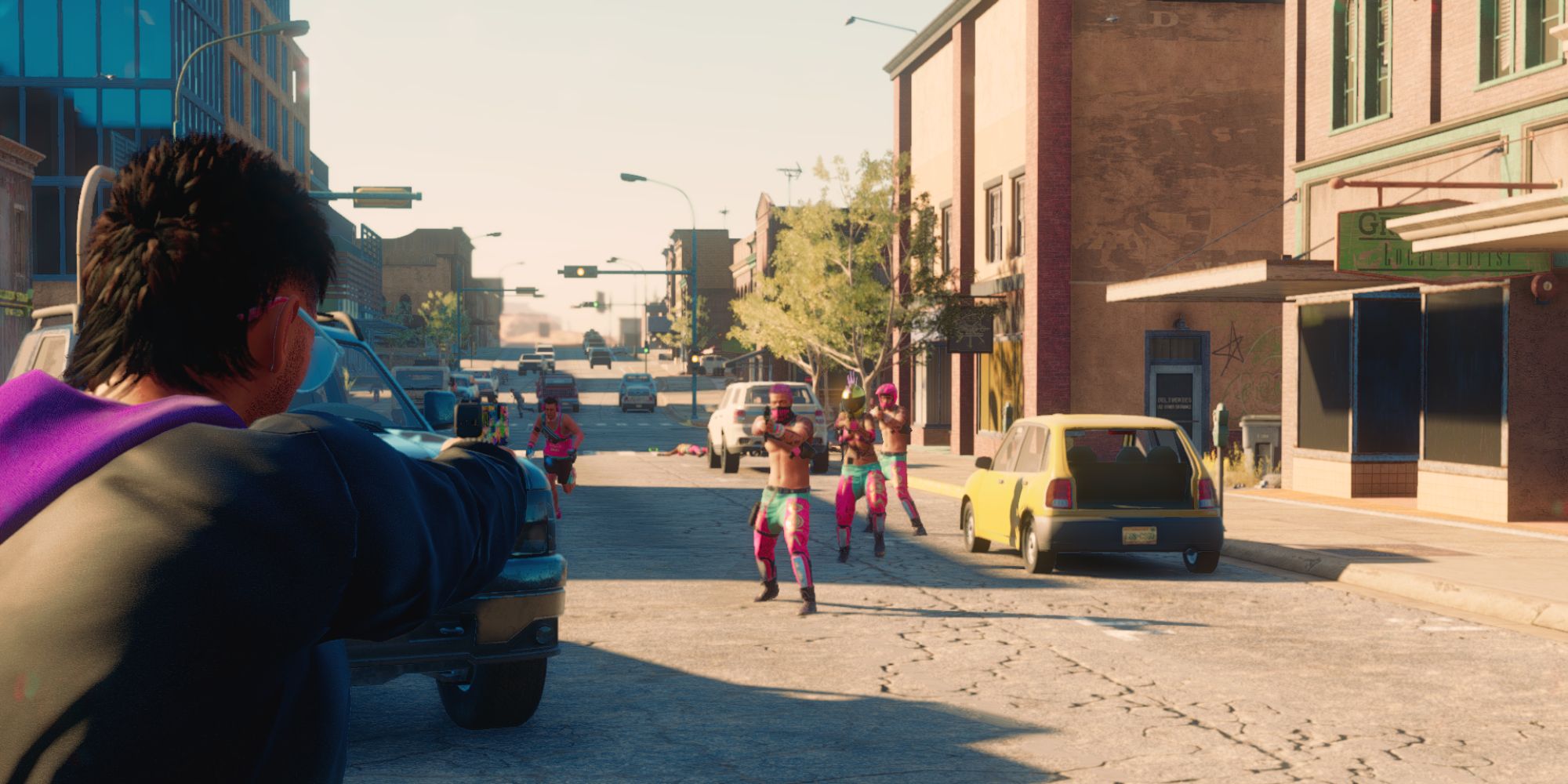 Part of what makes the Kobra pistol great is that you don't need to spend a lot of money or complete things to acquire it. You are given it right after the prologue as it serves as a starting weapon.

Surprisingly, it also happens to be one of the best handguns in the game. This is because it's deadly accurate and packs a decent punch. It won't be regarded as the greatest weapon in Saints Row history, but it's a solid firearm. 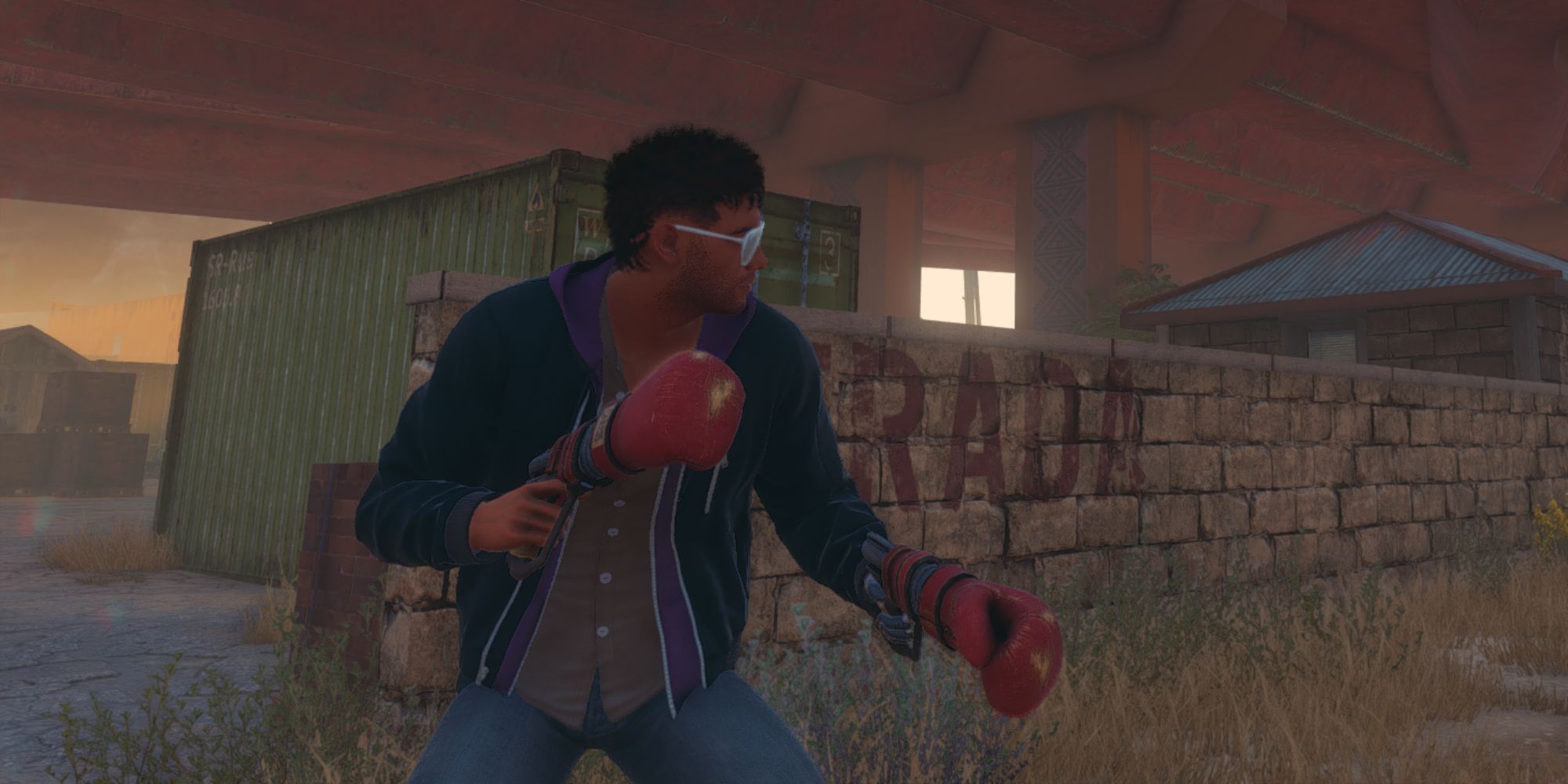 Most melee weapons in the game don't really stand out, as they're all big things that you swing. The Pugnus Sanctus Dei is different, though, as it's two boxing gloves attached to what seem to be handguns.

When fired, the gloves spring out towards your foes with a decent amount of force, like the sort of boxing contraptions you see in classic cartoons. The gloves also retract, meaning the weapon has unlimited ammo. And, unlike other melee weapons, it allows you to get people from a distance. 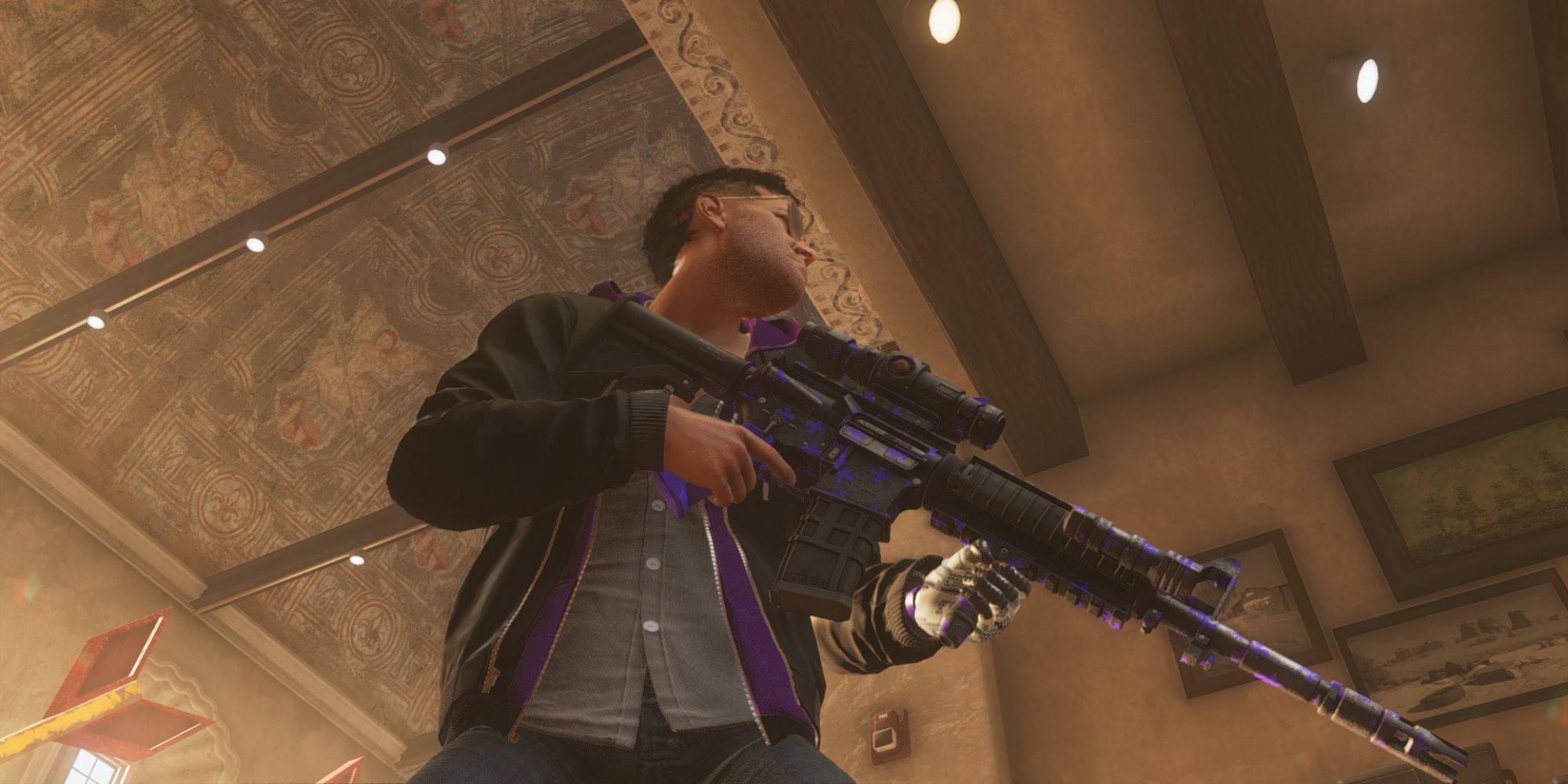 This is the sort of ordinary weapon you see in many shooters, as it's a military-grade assault rifle that fires burst rounds. So, it's not a good choice for those seeking the most bizarre guns.

Yet, the AR-55 is a good choice for anyone looking for effectiveness. After all, this is a very accurate weapon that will help you get many headshots. It's going to hurt wherever you hit your foes, though, as it's a powerful weapon. 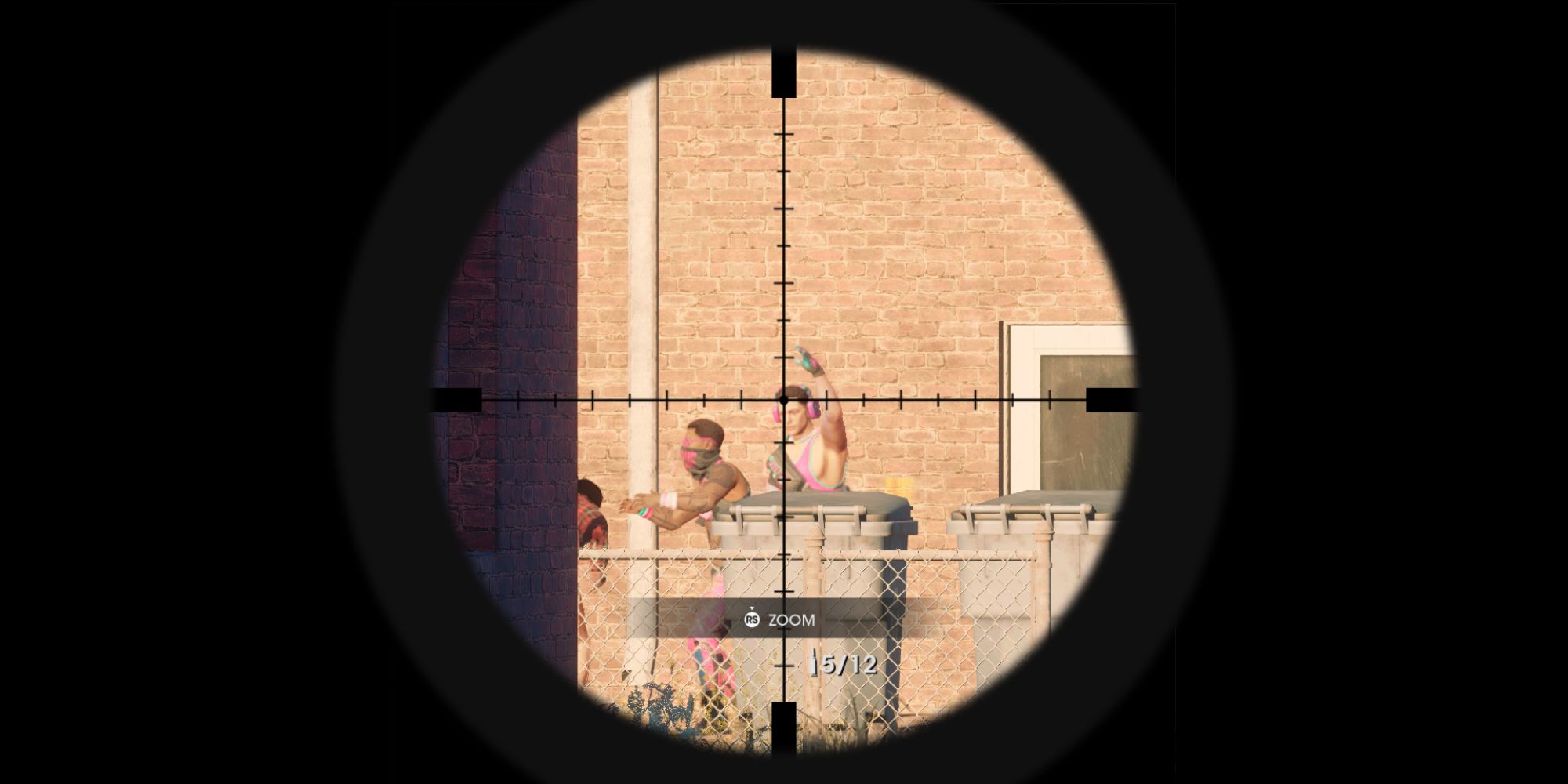 Saints Row will never be mistaken for an amazing sniper game, but the TOGO-13 rifle can come in handy. As the only sniper in the reboot, it's your only option for picking off people from afar. While that won't be needed in the average skirmish, it can be useful in certain scenarios.

The weapon has all the hallmarks of a good sniper. It has an adjustable scope that doesn't sway when you're aiming. Plus, each round you fire packs a punch. 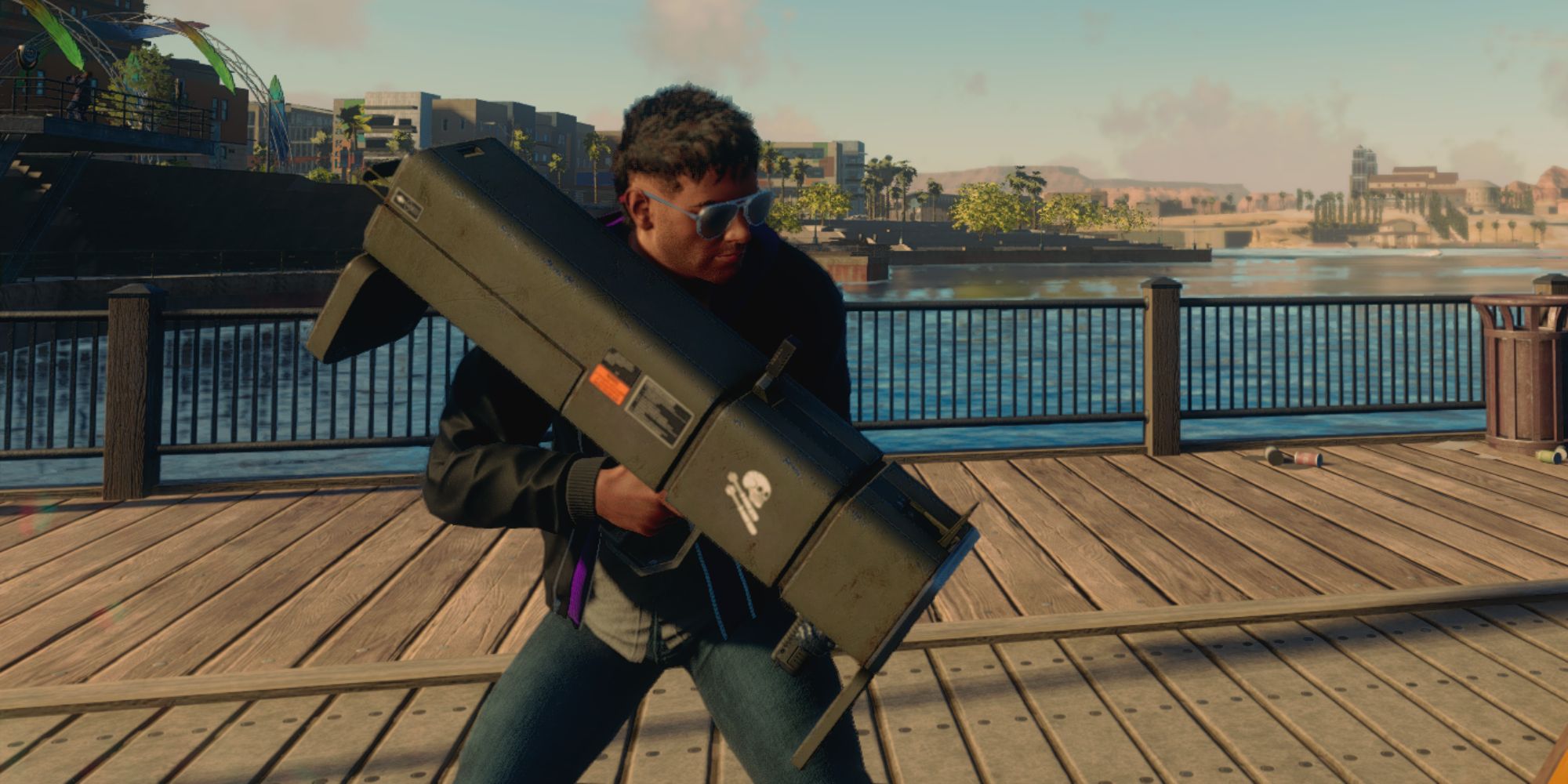 The AT for this weapon stands for Anti-Tank, as this launcher is designed to blow up vehicles. It's very useful in that regard as it does plenty of damage to tanks, helicopters, cars, trucks, bikes, and anything else your enemies use to get around. It will also easily blow up mere humans if you want to use it for that purpose.

What makes it better than the average RPG is that it holds more rounds. On top of that, you can transform it into a potato launcher by changing its visual mod, which is a nice bonus. 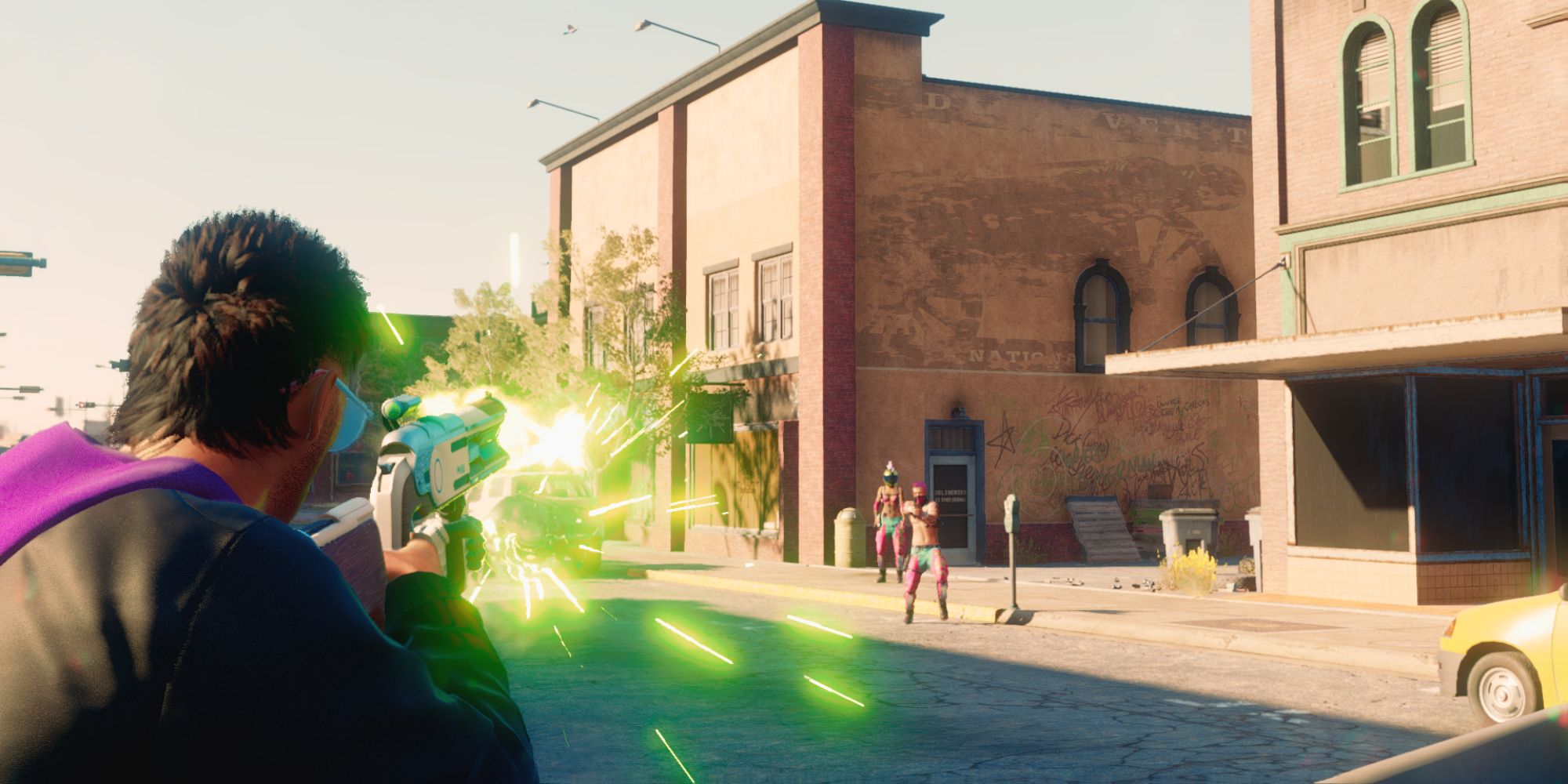 Charge weapons in games are usually either amazing or terrible, and there's typically not a middle ground. The Focus Rifle is thankfully closer to the amazing side of things. It helps that it doesn't take too long to charge up.

You just hold the fire button down for a few seconds, and then you're ready to shoot. And what a shot it is, as the Focus Rifle does incredible damage to humans. In fact, you'd be hard-pressed to find anyone who can survive a blast from this contraption. 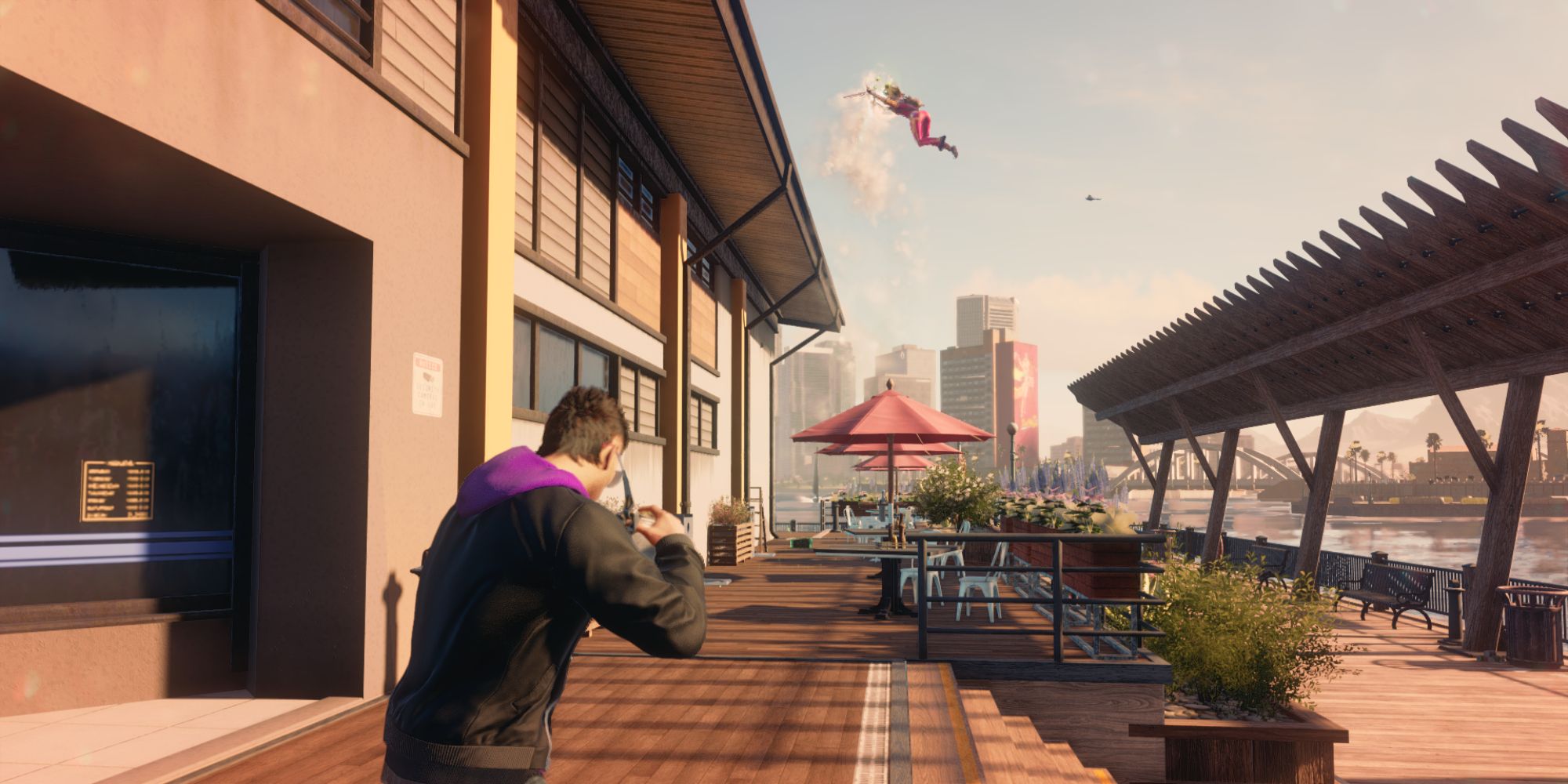 There are plenty of non-sport games that allow you to partake in sports. Saints Row doesn't enable you to shoot hoops or play a round of tennis. However, you can kind of play football with the Thrustbuster. This is because the weapon is a unique type of football that you can throw at your foes.

If it hits one of them, the ball sticks to them before dragging them up into the sky and exploding. It's certainly a creative weapon. More than that, though, it's deadly as you can kill armored enemies with one throw. 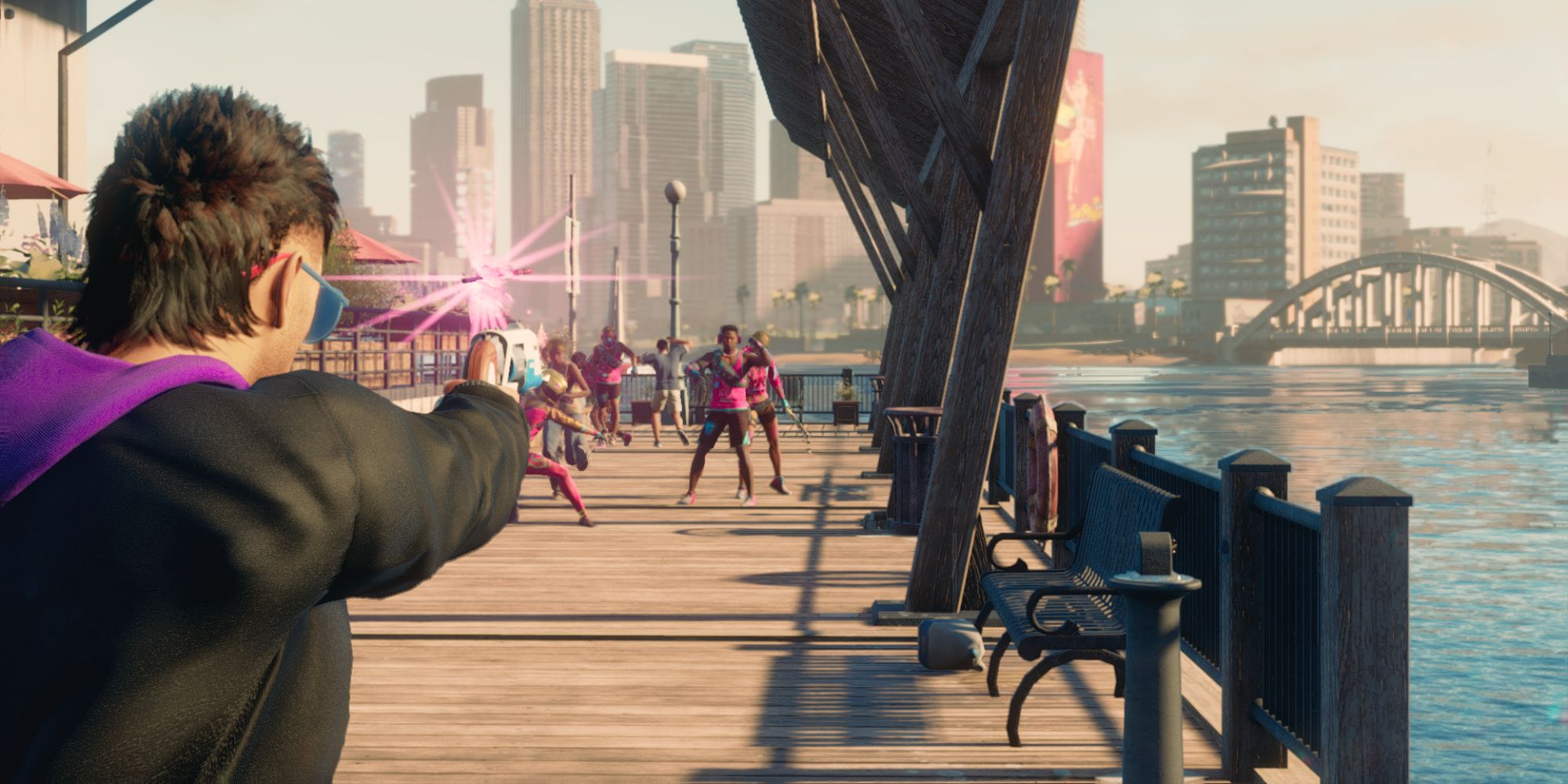 Marshall might be a morally questionable faction, but you can't deny that they make some cool things. For instance, they were the geniuses behind the MDI-39M Sixguns. The revolver-type weapon fires unique projectiles that automatically guide towards the enemy.

So, as long as you're shooting somewhat near your foes, the gun will make sure you never miss. Therefore, it's certainly an accurate pistol. The fancy projectiles deal a good amount of damage, too. This is why Friendly Fire put a $30,000 price tag on the firearm. 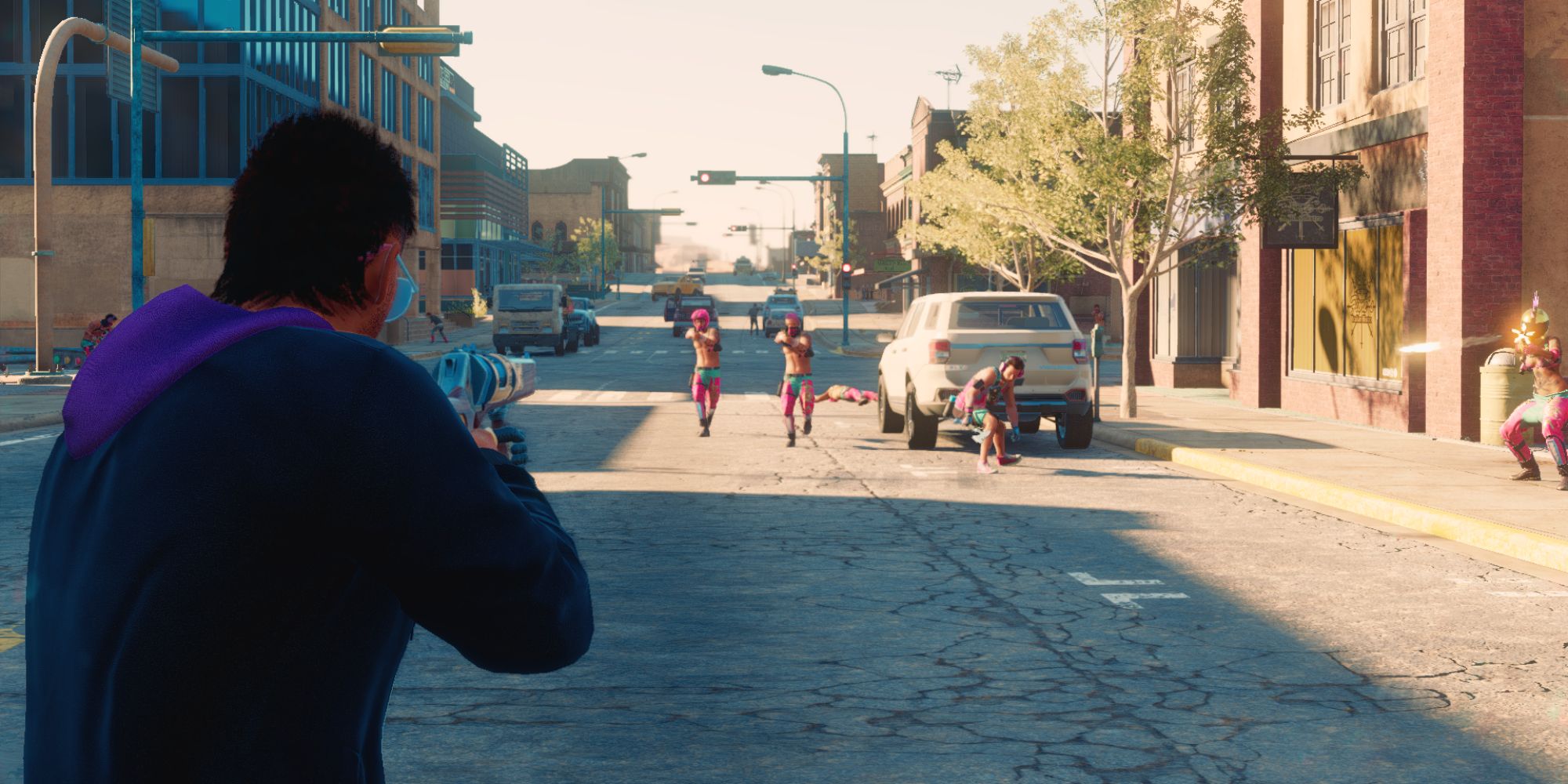 As most battles in Saints Row are fast-paced, slower-firing guns – excluding power weapons – are generally not that great. The Carbine rifle is an exception. What this gun lacks in fire rate, it more than makes up for in power and accuracy.

As such, you can go around blowing heads off with this beast. And that's not just a figure of speech, as heads usually get blown off with this weapon, and their body flies backward. They sometimes even do a backflip. 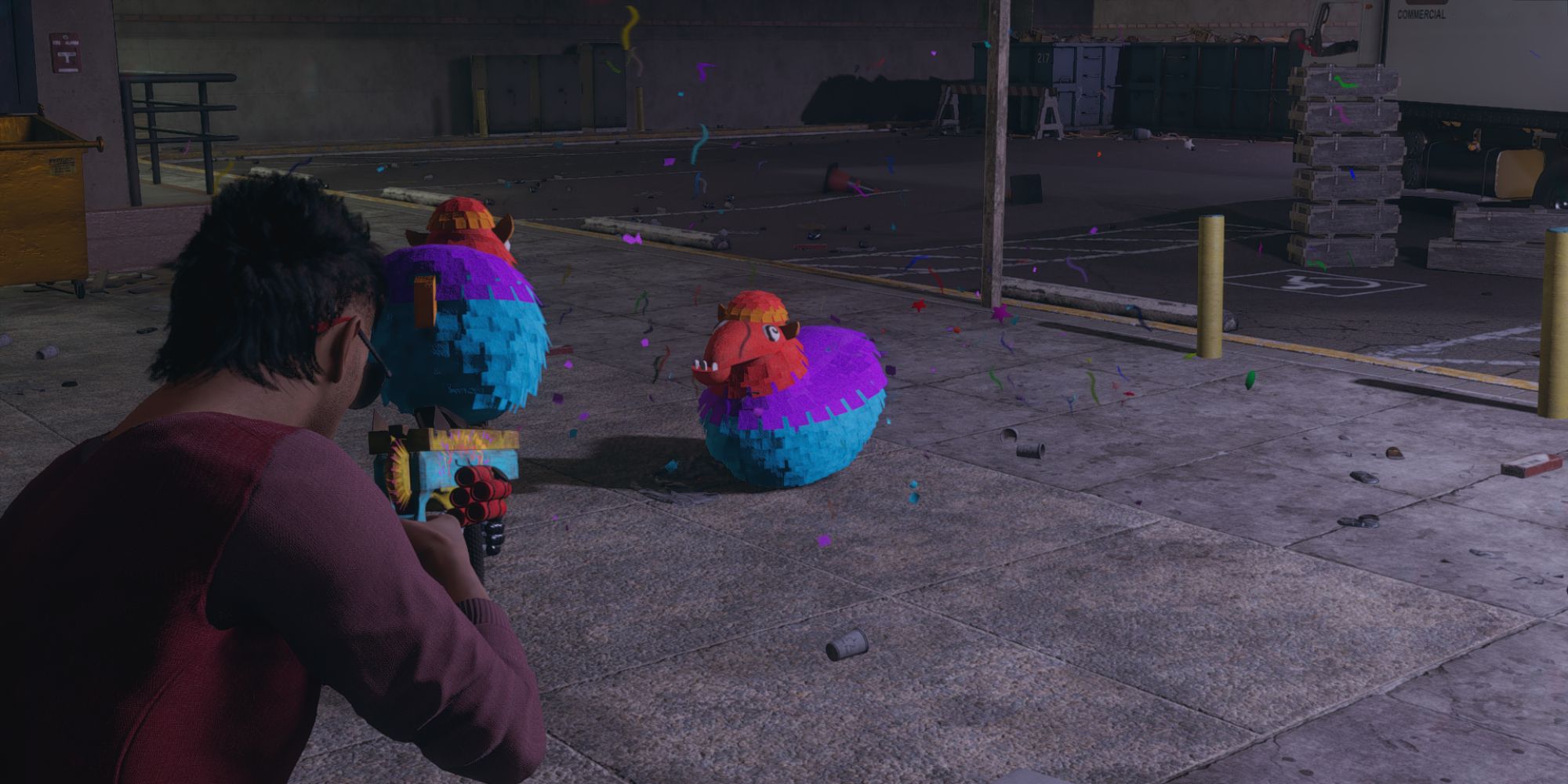 There has been an abundance of wacky explosives in gaming, many of which feature in the Saints Row series. Another addition to that group is the Pinata Launcher. The name of this one gives you a decent indication of what to expect, as this weapon fires Pinatas.

They aren't the regular Pinatas filled with candy – they're ones that explode. And it's a hefty explosion that can wipe out a whole group of foes. It helps that enemies are automatically attracted to the Pinatas for some reason. So, it's a very good weapon for wiping out plenty of adversaries at once. Plus, money comes out of the Pinatas, too, which is a nice little bonus.