The best new board games from Gen Con 2019

At this year’s Gen Con, the nation’s largest tabletop gaming convention, there were no fewer than 630 new board games to choose from. Even with a convention spread across four full days — the Indianapolis Convention Center is open 24 hours — there’s simply not enough time to see them all.

Even with such a crowded field, there are dozens upon dozens of titles that stood out. Here’s Polygon’s take on the five most ambitious new games from Gen Con 2019.

For more on tabletop games, including role-playing games and card games, check out our dedicated tabletop page. 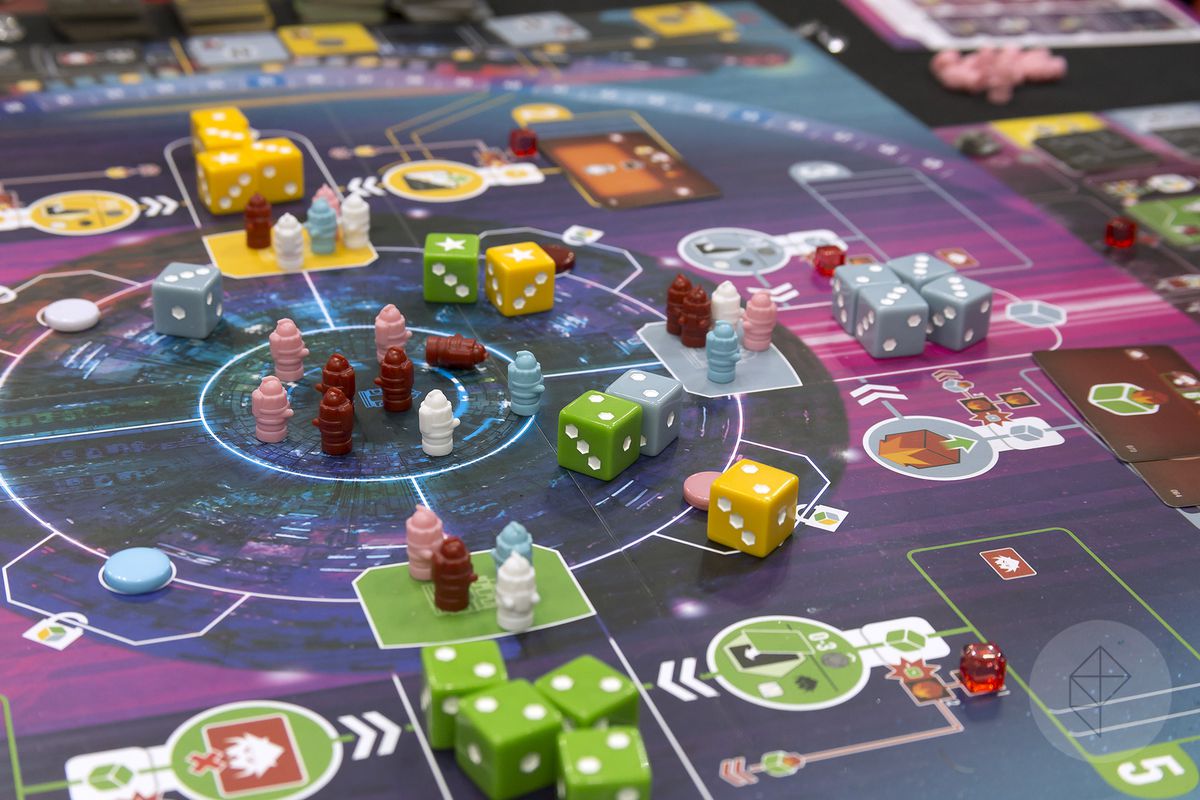 Just one of the large boards required to play Black Angel. The plastic meeples in the middle represent robots that the competing AI use to do work around the ship.
Photo: Charlie Hall/Polygon

Solution: Layer system on top of system, and wrap it all in an art style inspired by classic pulp novels.

One of the hottest games this year was a dense, systems heavy game called Black Angel. I’ll be honest, I didn’t really get it at first. I actually had to run the demo twice — a total of 40 minutes at the table on the vendor floor — before it clicked. When it finally did, I was shocked how quickly the strategies came to mind.

In Black Angel, up to four players take on the role of advanced artificial intelligences tasked with shepherding humans to an Earth-like world called Spes. The AI on board are tasked with keeping the ship running, and that means dealing with any unusual situations that arise along the way. The most successful AI won’t be deleted when the ship arrives, so players are literally playing for their program’s survival.

The fun begins when the Black Angel begins to encounter alien species. Based on those interactions, each of the AI at the table get to learn something new. They can then slot those advanced capabilities into a grid that they maintain as a sideboard. Trust me when I say that there’s a lot more going on than that. There are so many clever little systems going on that, at times, it’s hard to un-focus your eyes enough to see the science-fiction theming underneath. But it’s there, I assure you.

On top of all the heavy-duty systems design, the game’s art style is unlike anything I’ve seen before. People walking through the vendor floor seemed pulled magnetically toward the table.

Black Angel will see wide release in the United States by Aug. 30. Pre-orders are open now on Amazon. Follow publisher Pearl Games at its website or on Facebook for more information. 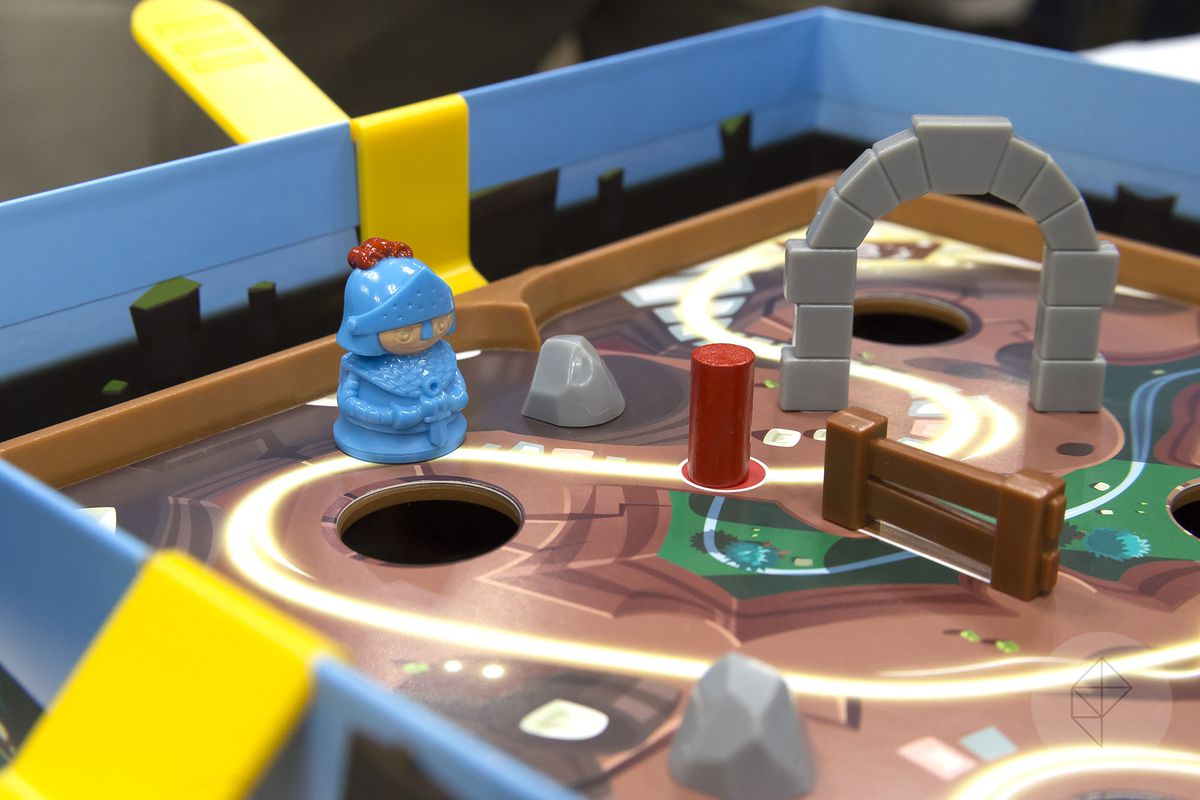 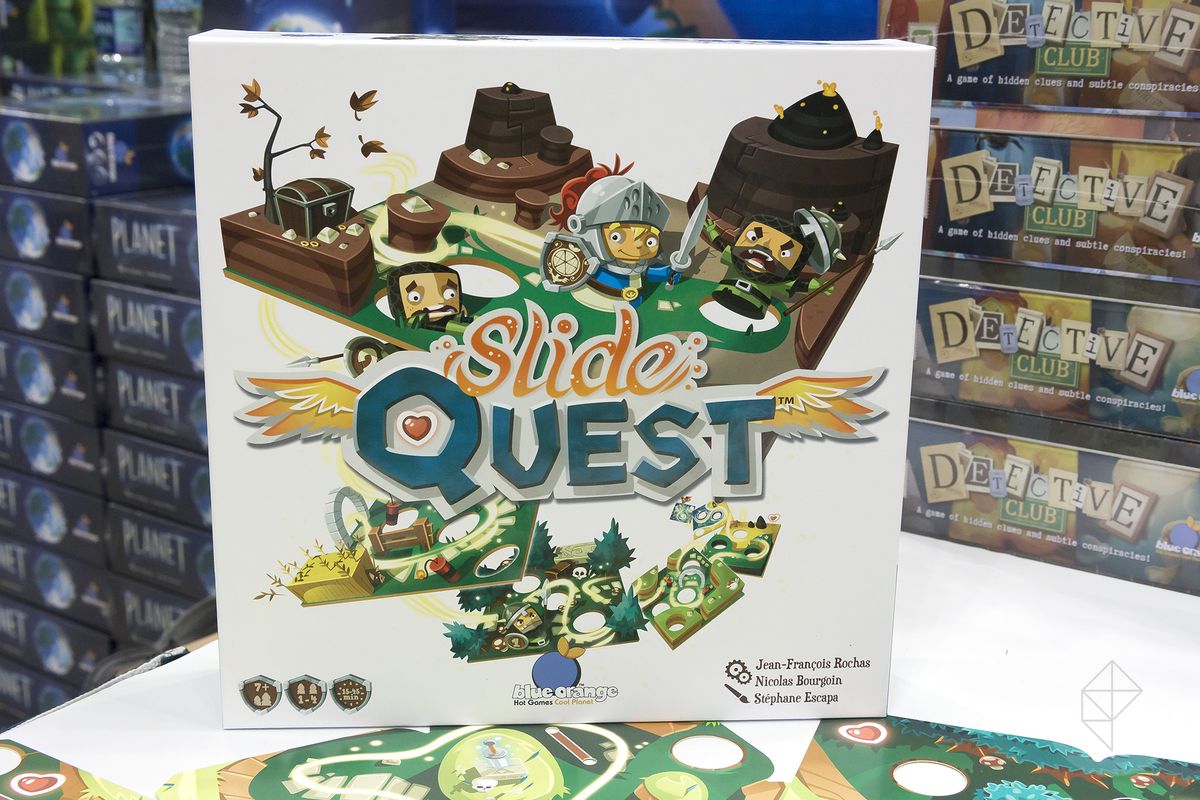 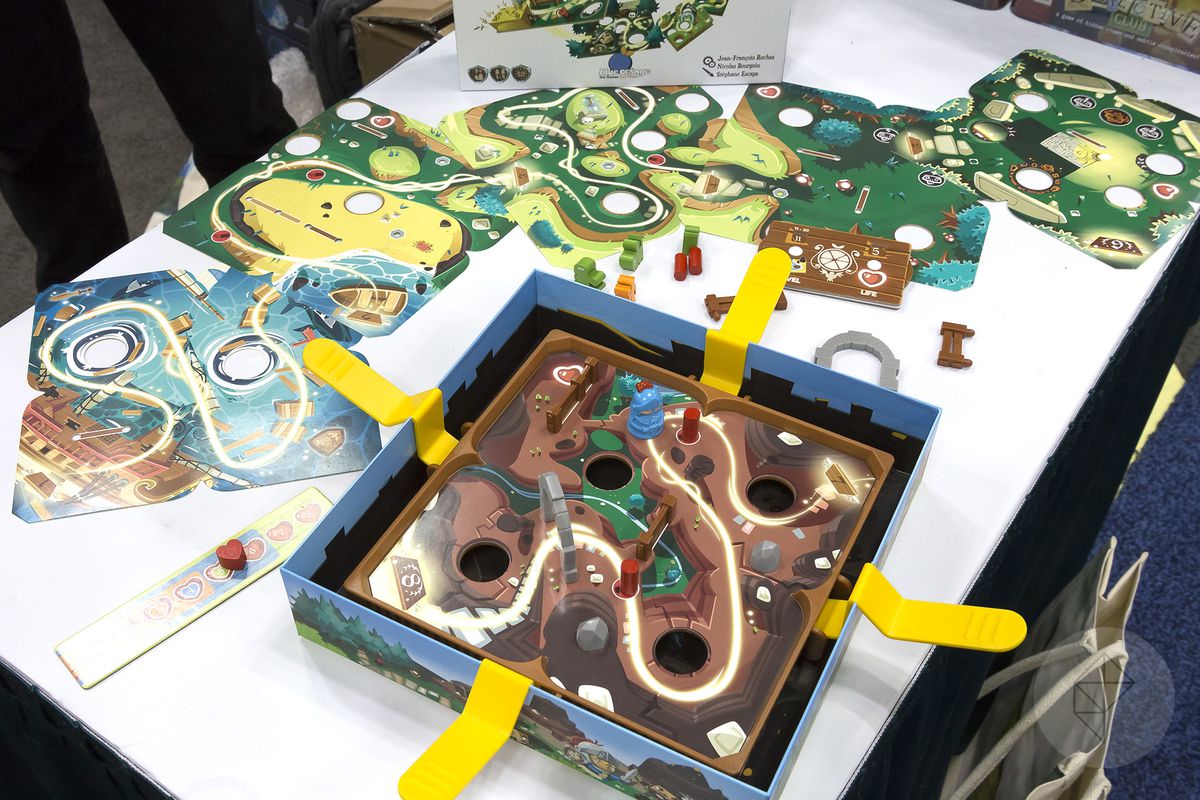 Ambition: To make the next great dexterity game.

Getting a publisher excited about a dexterity game — something that requires reflexes, not dice rolls — is a difficult task. They’re expensive to produce and largely disposable. That’s likely why the genre hasn’t seen the kind of explosive growth within the hobby space. Nevertheless, Blue Orange took a gamble with Slide Quest, and it looks like they may have another hit on their hands. The game sold out on the very first day at this year’s Gen Con.

In Slide Quest, up to four players gather around the game box itself, each one with a simple yellow lever in their hand. By pushing down on the lever, Labyrinth-style, they can coax their blue plastic hero along the righteous path to victory. The movement of that miniature is buttery smooth thanks to a massive ball bearing lodged in his base.

But they didn’t stop at one or two maps. The game comes with 20 different maps, each one pulled from four different thematic worlds. Lay them all out and they form a single, contiguous storyline. There’s even a life bar, and rules for a roguelike mode of play. Expect expansions galore. The plastic tray at the core of the game is cleverly designed with lots of room for new bits of scenery to get added down the line.

Slide Quest is available now online and in stores. You can learn more at the official website. 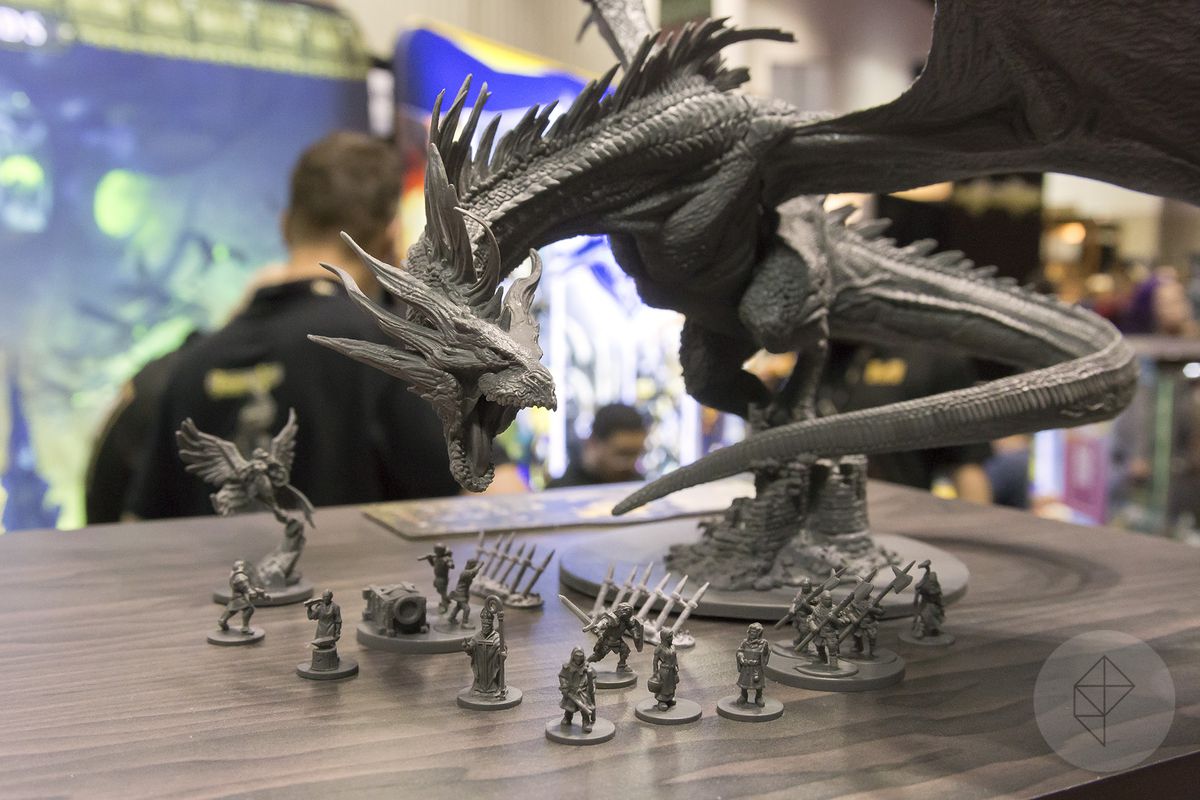 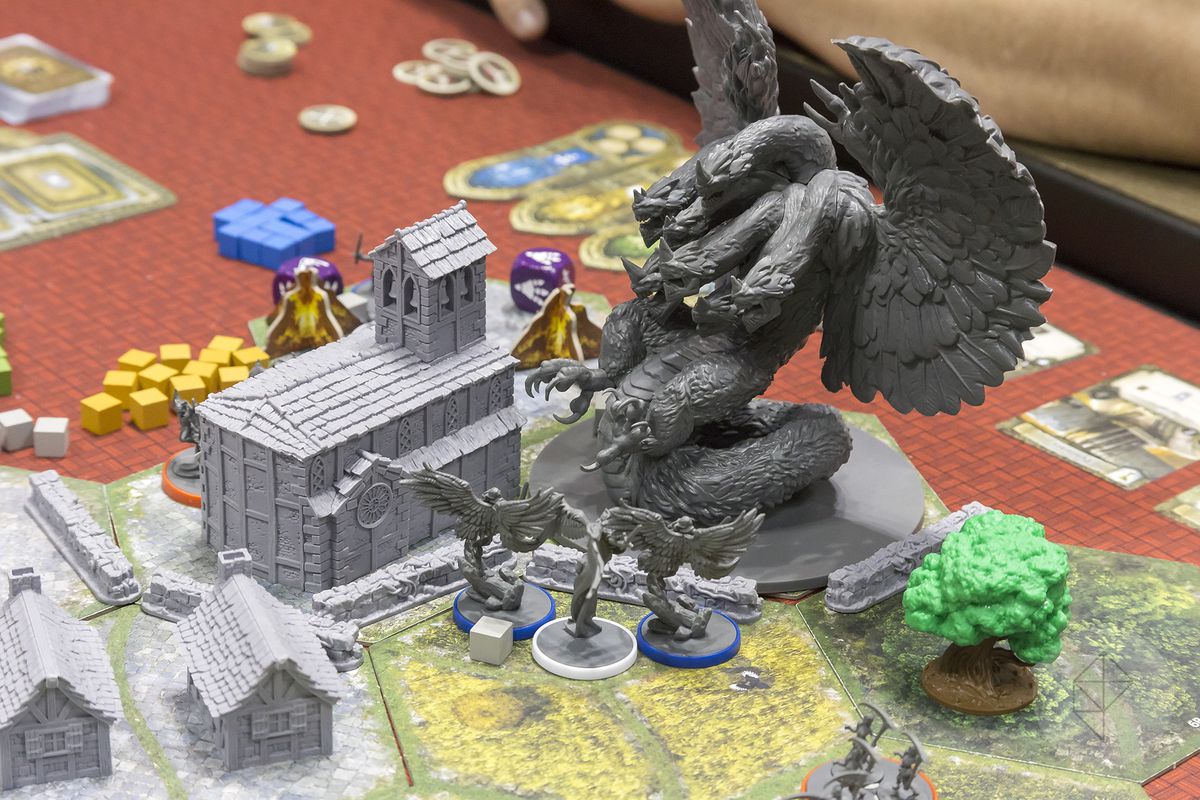 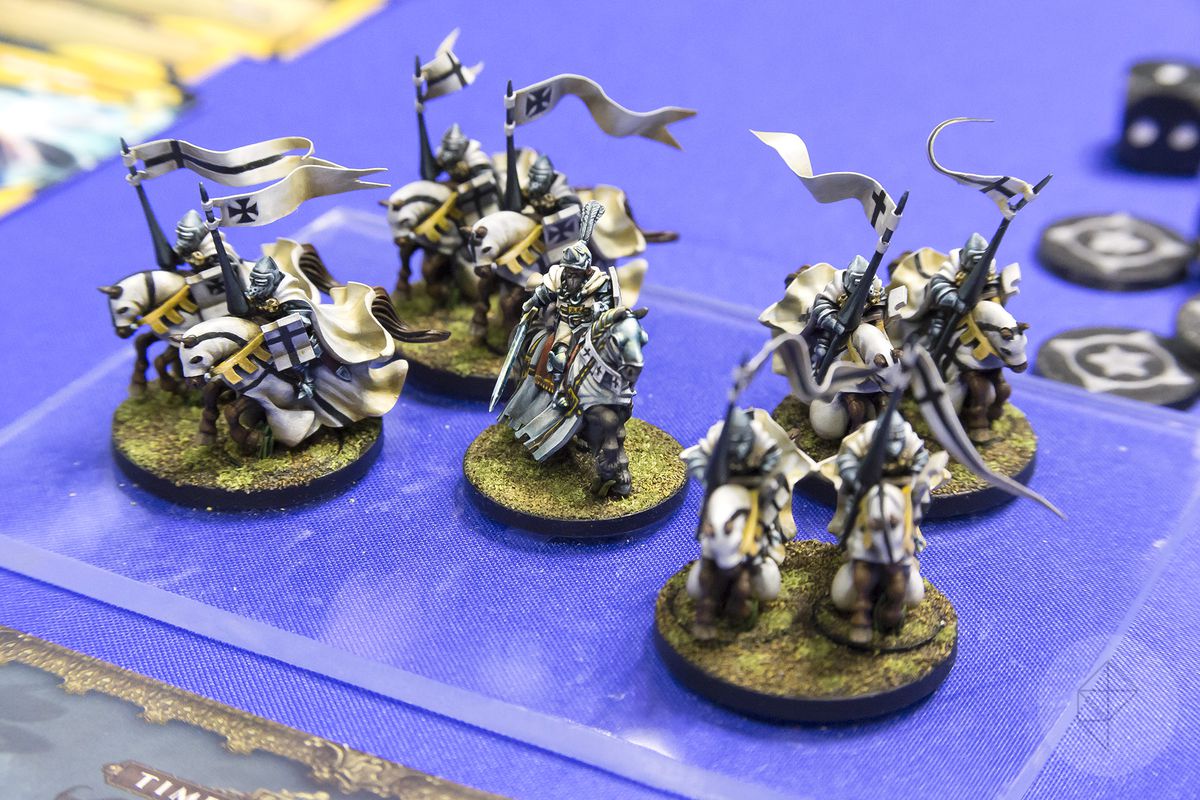 Time of Legends: Joan of Arc

Solution: Use modern manufacturing techniques to cram in as much detail as possible at the 15 mm scale.

Miniatures wargaming has long had two main scales. There’s the classic 28 mm range used in Warhammer 40,000 and pretty much every miniatures-heavy board game out there. There’s also the 15 mm scale, which is reserved for massive battles in the Flames of War system and more niche titles like Dropzone Commander.

I find that 28 mm minis are detailed and pretty, while the 15 mm miniatures … aren’t, really. The production process makes them all look a little soft and mushy.

Time of Legends: Joan of Arc changed my mind. The team at Mythic Games is producing some of the most extraordinary minis that I’ve seen in years, with dynamic poses and impressively detailed faces. And they’re managing to do it at the 15 mm scale. That means dozens of cavalry riding in formation with a very small footprint, and towering monsters that look incredible on the table.

Best of all, since there’s less material involved in the manufacturing process you can own a massive collection with multiple factions for less than the cost of a single army in other, larger-scale systems.

Trouble is, you literally cannot buy the game right now.

In fact, representatives from Mythic tell me that they’re just not really sure how they want to move the product line forward. According to a blog post, there’s a retail core set that should be out later this year. But Joan of Arc would also make a great miniatures wargame line, sold piecemeal on hobby store shelves.

Whatever happens, fans should be on the lookout for Mythic’s next Kickstarter campaign, which includes reprints from the first successful campaign and a bunch of new minis as well. 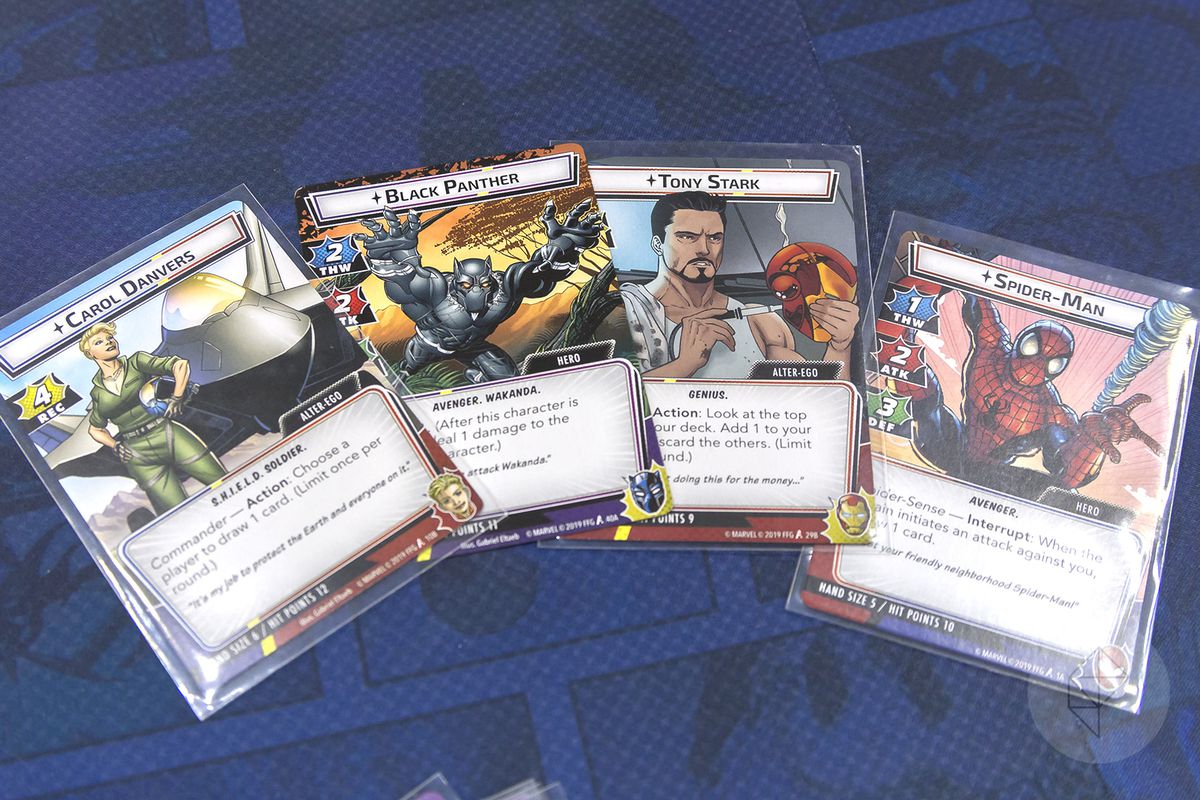 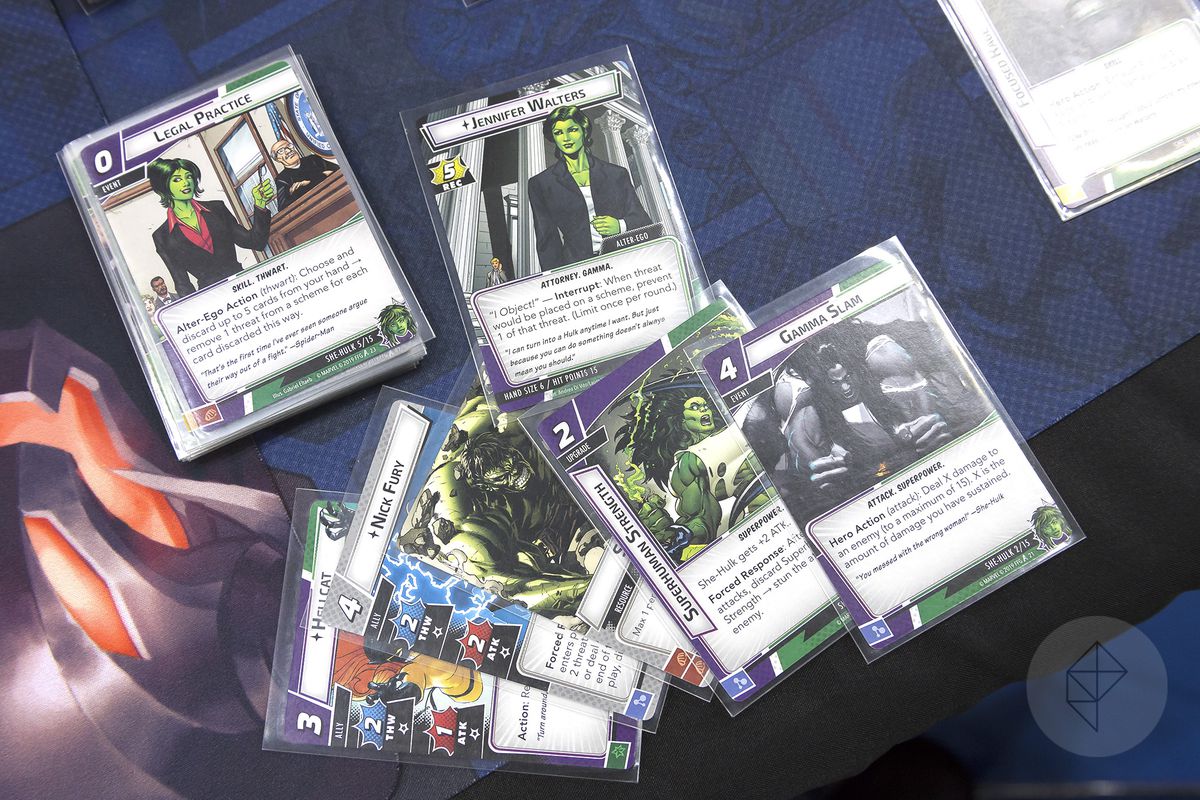 Ambition: To bring Marvel fans to the table for a cutting edge card game.

Fantasy Flight Games always has a lot of irons in the fire, and this year’s Gen Con was no exception. In addition to Clone Wars-era expansions for Star Wars: Legion and a handful of high-concept licensed board games, they also brought along the near-final version of Marvel Champions: The Card Game. It’s the newest product in its successful line of Living Card Games.

Marvel Champions uses lots of the same mechanics as the Minnesota-based developer’s long-running The Lord of the Rings The Living Card Game. But it does so in new and dynamic ways that clearly evoke the fun of the Marvel universe.

The game is entirely cooperative, with up to four heroes going up against an iconic villain. Each of the heroes has a two-sided card, with their alter ego on one side and their superhero form on the other. As She-Hulk, for instance, I was able to battle villains in the courtroom as my alter ego Jennifer Walters, removing threats from the board and forestalling the end of the game. Once enraged I kicked all kinds of ass, pounding evildoers into submission. By managing my hand of cards — which changes size depending on the form I take from round to round — I can quickly switch between modes of play to maximize damage.

Perhaps best of all, Marvel Champions is super simple to teach. Look for it on store shelves later this year, and follow along at FFG’s official website for more information. 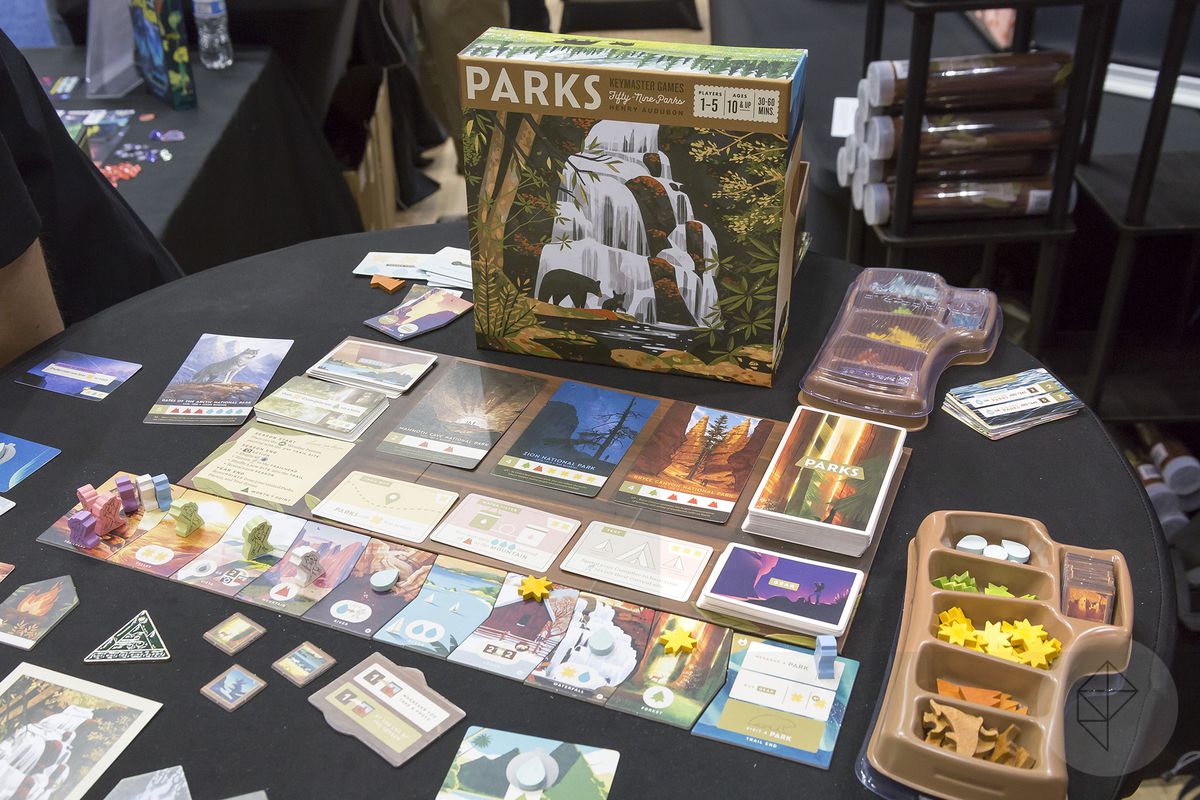 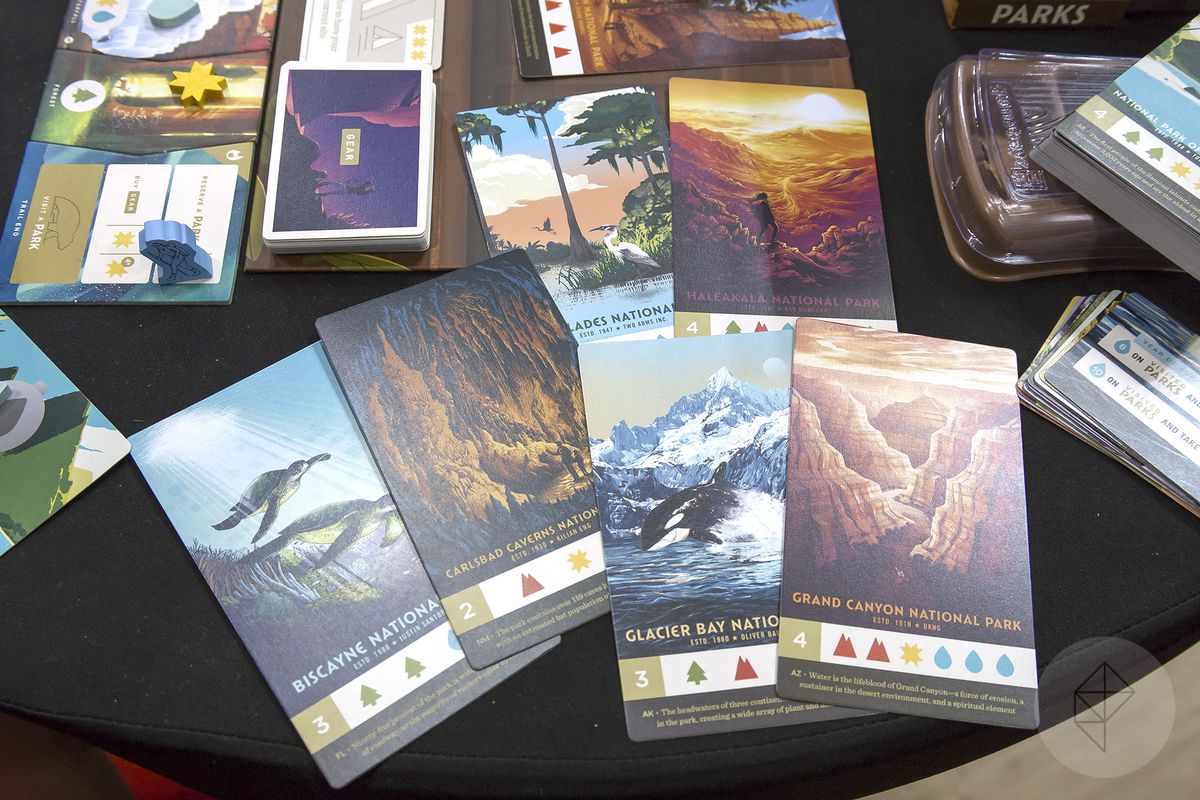 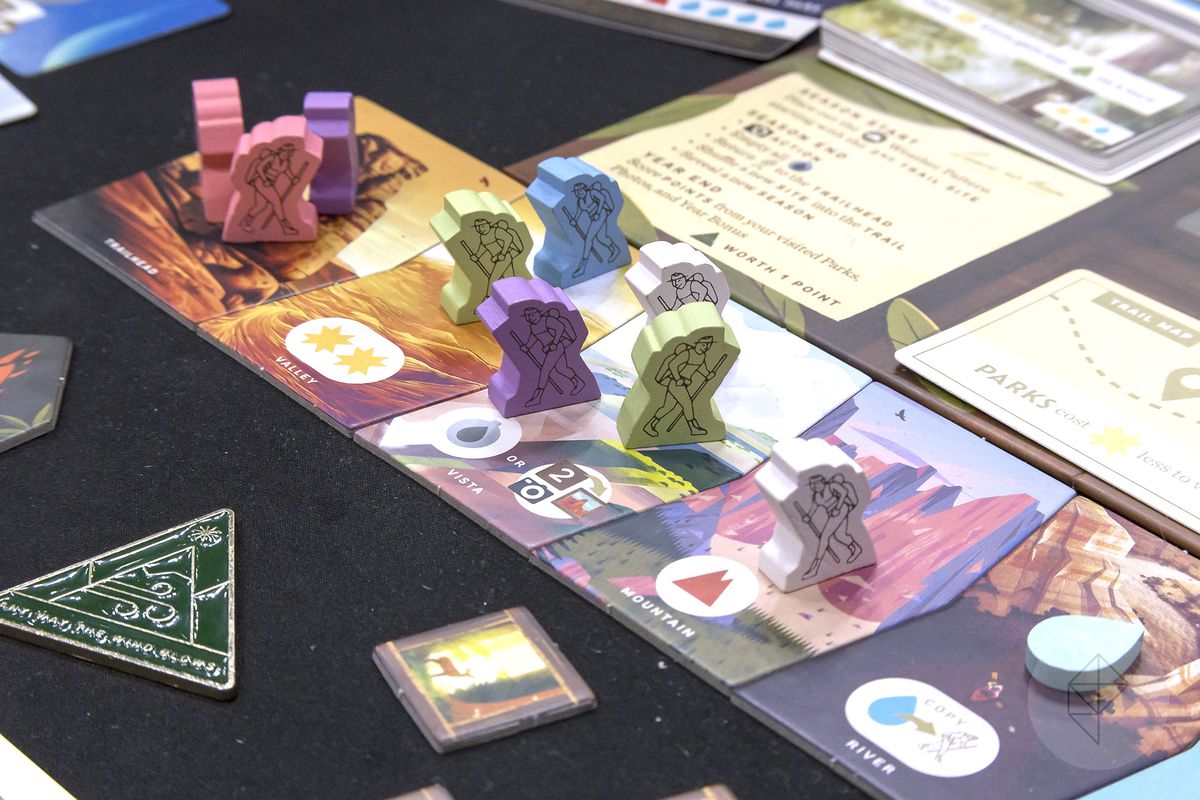 Other than Black Angel, the most striking new game on the floor of this year’s Gen Con was simply titled Parks. The big draw here is the game art, which was sourced from a novel art project celebrating the Department of the Interior’s National Park System. Sales from the game, as well as t-shirts and posters related to the project, go back to help fund America’s most iconic natural spaces.

Parks isn’t just another pretty face, however. It’s a complete package with interesting, Euro-inspired game mechanics and top-notch pack-ins to keep everything organized. Copies sold out quickly this year, but you can expect more to be available this fall. Pre-orders are open now.