The Falconeer is equal parts impressive and baffling. Its scale is shockingly sheer, and every part of its world is washed in plush pastels that transform harsh thunderstorms and abyssal oceanic chasms into mesmerizing dreamscapes. Gliding through the skies above The Great Ursee is soothing, charming, and genuinely refreshing, as if every beat of your falcon’s wing ushers a whirlwind of fresh air in your direction.

It’s a shame, then, that The Falconeer is confused. I am not sure what it wants to be or who it’s for. It does not strike me as a love letter to aerial dogfighters. While its lore is intriguing, it seems like a side serving, and likely won’t satiate the appetites of those interested in dense fictional histories. It’s lovely to look at, and to listen to, and flying feels like flying. But although that’s the core part of the game, it’s still precisely that: a part of it — and every single other part seems almost impossible to reconcile with that central aspect.

When you first boot up The Falconeer, you’re dropped straight into a tutorial. I would say you’re guided through it, but you’re not — it’s hopelessly arcane, and I’m not sure I would have stuck with the game if I was playing under normal circumstances (it’s worth noting that I’m glad I did stick with it — it does get better — but wow, it was not easy at the beginning). 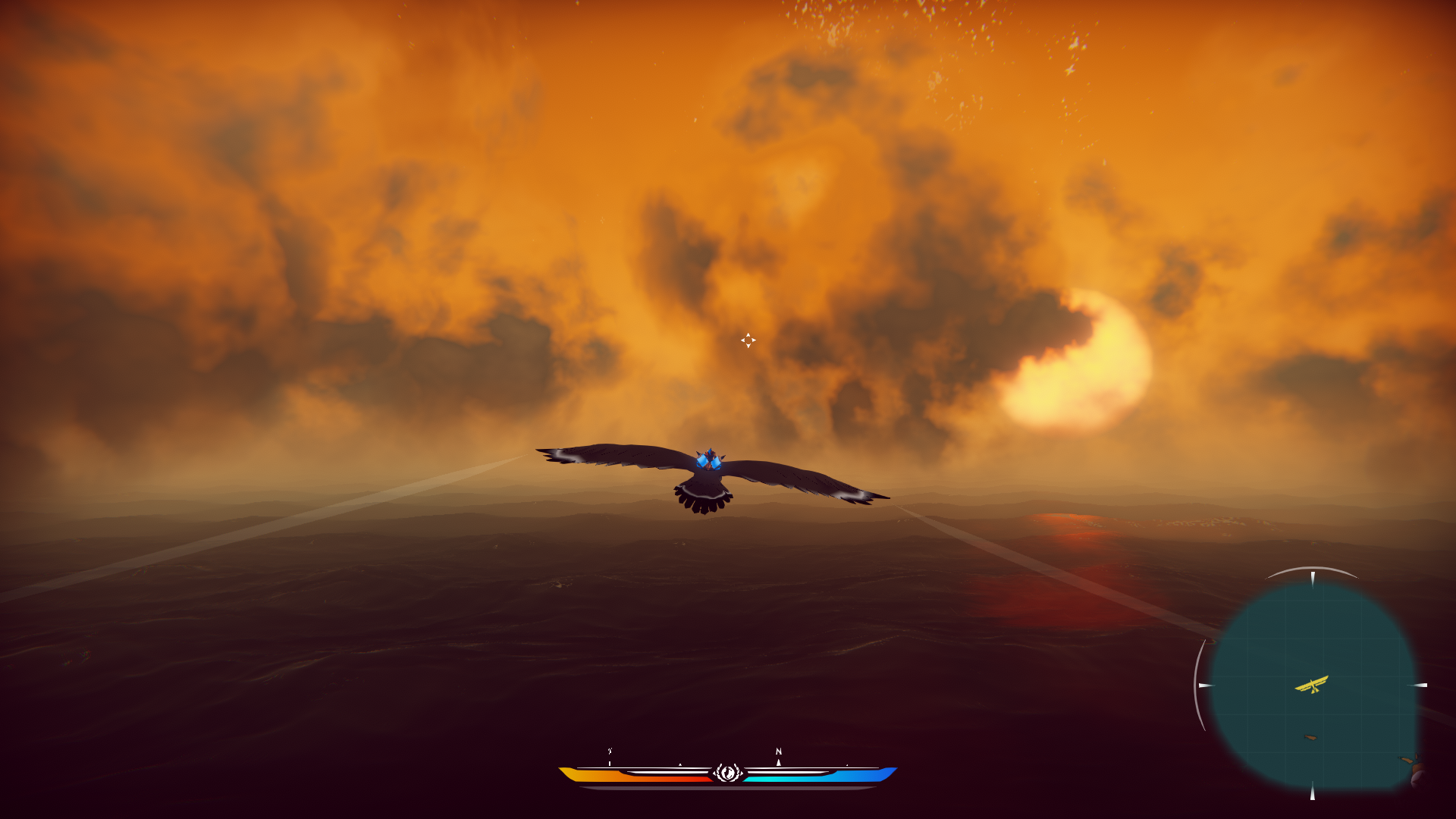 The controls are inverted at the start, which is not an especially big deal — you can change them. But even when I remapped the controls to a more standard variant, navigating the air was immensely rough. I soon learned that you don’t really need to use the analog tied to camera orientation all that much, and can instead just focus on pulling your falcon left, right, up, or down — but the game never tells you that. It chucks you out of the nest and says, “fly, little falcon,” and as you might expect, learning to do so on your own is infuriating.

Eventually, after you start flying well, you’re introduced to combat. The dogfights — or should I say falconfights — are tense and sometimes enjoyable, but not for the reasons they should be. Evasive maneuvering is brilliant, in that your ostensible options here are deceptively simplistic — you can barrel roll right or left, or you can dash forward, using a kind of energy you build up by flying downwind. But you can also swan dive into the sea at a blistering pace, before launching yourself back up in the air and whirling around behind your opponent. On several occasions I ran out of energy, barreled downwards, skimmed the water, and used it as a hydraulic catapult into a sideways flip leading into a natural swerve to spin around at precisely 180 degrees before reentering the fray falcony guns blazing. Mobility — like standard flying — is excellent.

Shooting, on the other hand, is not. You generate ammo by flying into precarious lightning clouds, which charge a mysterious pack on your falcon’s back. But if you run out of ammo mid-fight, and there are no thunderclouds about, your behemoth war falcon quickly metamorphoses into a far less intimidating sitting duck. To make matters worse, the only information available to you in terms of how much juice you’ve got left is the colour of the aforementioned pack. Because there are only so many shades of blue in the world, and not all of us have the eyes of a literal bird, deciding whether or not you should engage a pirate fleet is pretty much guesswork. On top of that, shooting is very inaccurate, and largely fails to evoke the feeling of operating heavy weaponry off of the back of a warbird, which you would think should be a primary selling point here. 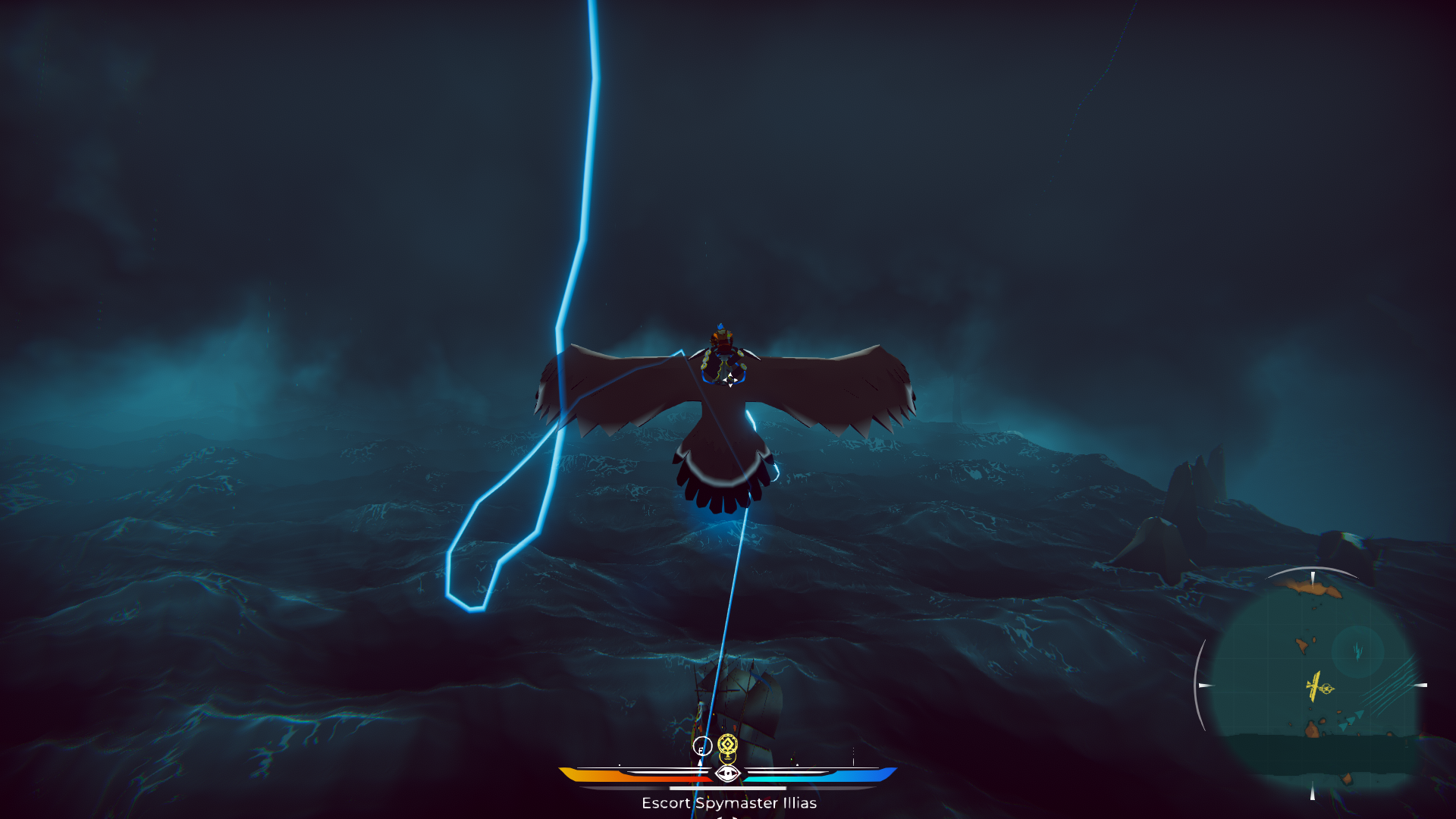 My biggest gripe with The Falconeer, though, was landing. If this alone was fixed, my impressions of the game would not only skew upward — they would skyrocket. Essentially, if you’re in the middle of a mission, said mission will be aborted if you land. I am not sure why this is the case — in terms of narrative coherence, there is no real reason for you to not be able to tackle multiple quests at once. But that’s what The Falconeer makes you do, so let’s roll with it. To land, you need to locate a section of a settlement usually marked by a circular symbol. The UI here is decent, and should be straightforward enough for you to easily locate your landing perch. However, it is not always receptive — if you’re carrying cargo, you can’t slow down the way you usually would, so you tend to come in hot at your destination. If it doesn’t register that you’ve arrived in the landing area — which happened to me many times — you just barge into the side of a cliff, obviously taking a huge health hit and damaging your precious cargo to boot.

Similarly, if you’re mid-mission and the game registers you as having landed, the quest just fails. On one occasion I took out a fleet of five pirate ships, at least six enemy falconeers, and a massive, armed-to-the-teeth airship. I was on my way back to Dunkle, your hub in the first chapter, and lo and behold, it said I landed somewhere. Mission failed. Why there is no “press X to land,” I do not understand. I understand wanting to avoid intrusive UI in what should be an experiential flight, but it would save a lot of people a lot of hassle when it comes to delivering non-bashed-up cargo and actually finishing difficult missions after already doing all the emphatically difficult bits. 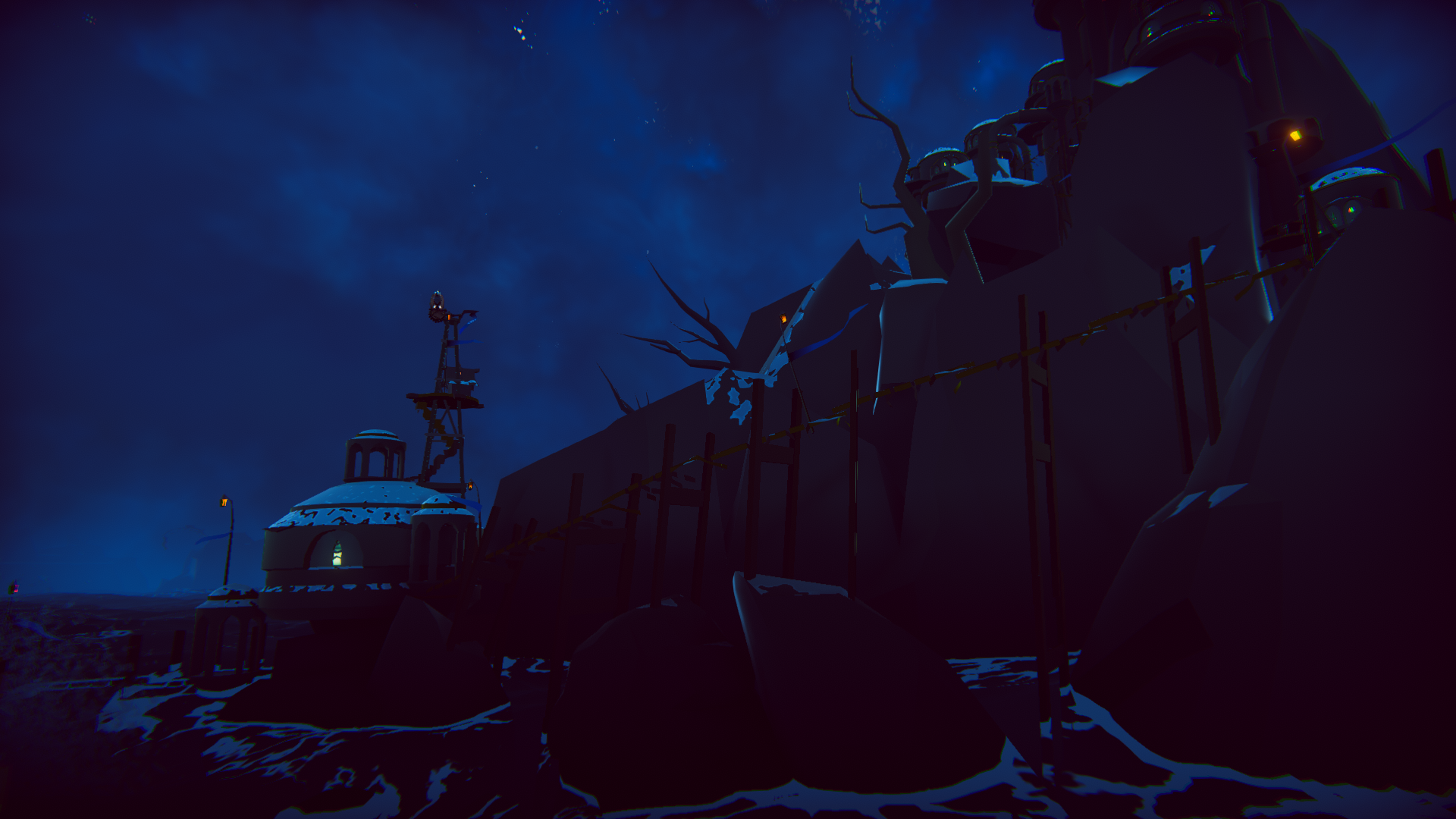 There’s loads more to The Falconeer — settlements, factions, skills, NPCs. All of these things were intriguing enough, but not mind-blowingly so. Some of the dialogue was funny, and I’m sure the history of the Ursee — royal families in power, mysterious tech hoarders, and pirate-infested seas — has some pretty intriguing facets to it. But it all feels a bit tacked on, at least in terms of the preview section I played. It could tell a riveting tale of conquering the nefarious monarchs of a war-ravaged pelagic world as a freelancer atop a majestic, mythical falcon in the long run — right now, though, I’d rather just fly aimlessly through the beautiful world, navigating maritime ruins and skimming the ocean foam beneath a moonlit sky. It feels like that’s the part of The Falconeer that really hits home for me: exploring a beautiful world for no real reason other than seeing what environmental curios it has to offer.