The Ninja Saviors Return of the Warriors review: Old school action for the PS4 and Switch 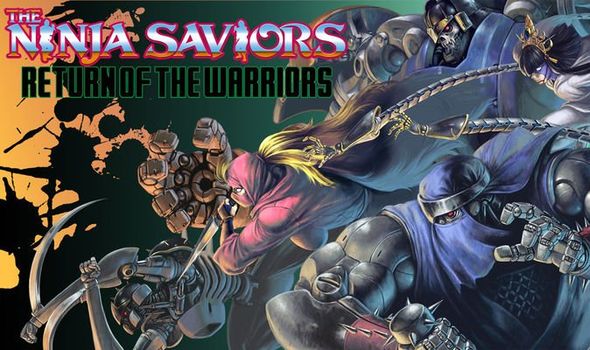 The Ninja Saviors: Return of the Warriors puts players in a position of power as they take control of five robots to take down a savage dictator.

As a return to the 1994 side-scrolling game The Ninja Warriors, the Ninja Saviors: Return of the Warriors continues the trend of focusing more on the tight gameplay than on the story.

A quick splash scene greets players as they turn on the game, giving them the basic details of the plot, before throwing them into a street fight.

In the same vein as classic fighters such as Streets of Rage and Double Dragon, Ninja Saviors requires players to take down the foes on the screen before moving to the next.

The distinction between it and other side scrollers, however, is the incredible detail ingrained into each character.

Much like Turtles In Time before it, each character – in this case a collection of androids looking to save to world – each have different stats, abilities, and skills.

While two of the five are extremely slow and hit the hardest, the remaining three vary on the lighter side of the spectrum, with faster, lighter attacks. 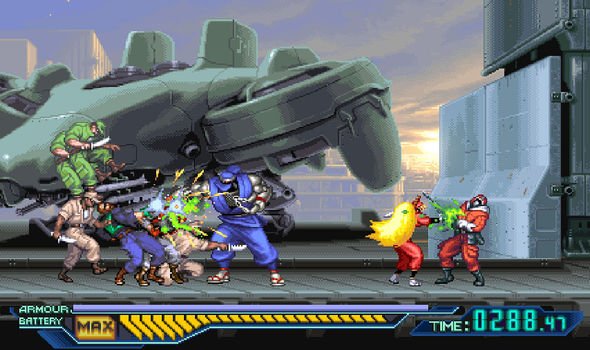 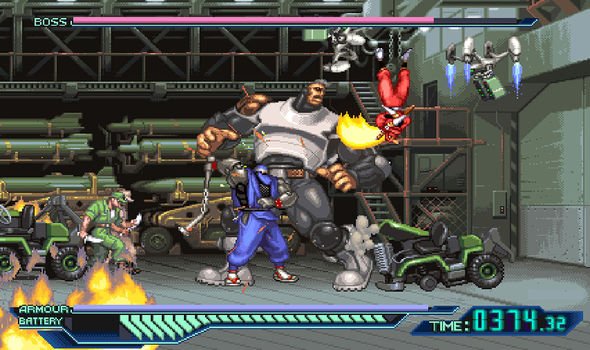 The three-button game gives players a jump, an attack, and a special attack – with a hold-to-block thrown in for good measure.

The special attack is governed by a Battery meter which charges automatically over time, and unleashes a devastating screen-sweep move that usually kills all enemies on screen.

This battery meter is only depleted by using it, or by being hit in combat, so players will quickly have to learn to tread the fine line between stepping into the fray and keeping clear of projectiles.

Each robot also has an attack modifier which utilises their weapons.

One allows the robot to throw dead shuriken, while another stands in place and whips out a brutal nunchaku.

These moves also use up the battery, but are more useful as utility moves to get players out of a tricky situation. 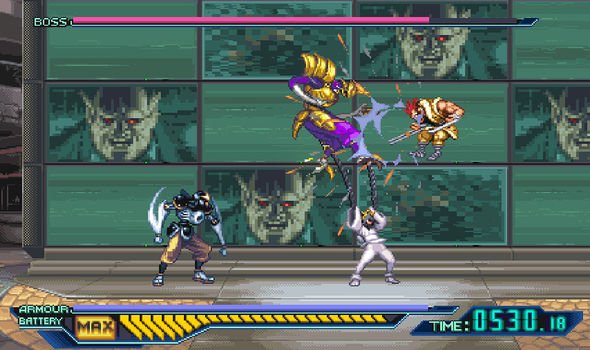 Combat is satisfying and difficult to master. After players have been knocked down by a tricky enemy a few times they will quickly learn they must adapt play styles depending on the audience.

After a few levels this change becomes second nature and it incredibly enjoyable. it truly makes players learn how to bring an end to a variety of foes quickly.

Conversely, some of the fodder foes do not pose much of a challenge – even in greater numbers – and therefore leaves players simply mashing the attack button to get to the next boss battle.

Strangely, each robot’s jump can also be modified.

Ranging from an enormous leap to a forward dash, all of the mobility skills give players a get-out-of-jail card for tougher scenarios, however it can easily be abused, and provides perhaps a too simple option to fix mistakes.

If the various enemies littered through the streets aren’t enough of a challenge for players to sink their teeth into, the bosses are certainly where the game is most testing.

Each end-of-level boss has a unique gimmick which sets them apart from the rest of the enemies that players may come across.

Whether the foe can call in airstrikes, lasers, extra minions, or just simply deal a lot more damage – the game’s bosses are the most entertaining part of the journey.

However with just over a handful of levels available, players may run through the The Ninja Saviors: Return of the Warriors rather quickly.

Time attack modes and unlockable androids may prompt return runs through the cyberpunk world, but following that, it may be a struggle to want to come back for another fight.

The Ninja Saviors: Return of the Warriors provides a beautifully crafted return to the side-scrolling beat-em-up genre. The uniquely built characters allow players to find their favourite play style and hone their skills quickly. While most of the enjoyment could be found in taking on the various bosses, players will also find much challenge in beating the later levels in a rush using the time attack modes. While it may look straight out of the 1980s, The Ninja Saviors: Return of the Warriors packs a 2019 punch with some well-crafted challenge and visuals.

The Ninja Saviors: Return of the Warriors is available now on Nintendo Switch and PlayStation 4.