The Social Dilemma: How digital platforms pose an existential threat to society

Back in 2013 while working as a “design ethicist and product philosopher” at Google, Tristan Harris circulated a presentation internally at the company, entitled “A Call To Minimize Distraction & Respect Users’ Attention.”

Harris had become concerned about the addictive and distracting nature of some of the technologies that companies — including Google — had created. He argued that tech firms manipulated human psychological weaknesses to maximize the amount of time people spent using their apps.

In the intervening years, the destructive impact that social networks and smartphones have on society has emerged as a major talking point, with mental health, government propaganda, conspiracy theories, misinformation, polarization, and political chicanery central to the discussion. With a U.S. presidential election on the horizon, Netflix will next week debut a new documentary — The Social Dilemma — that explores all of these issues, featuring input from some of the technologists responsible for creating the problem in the first place. But more than that, many of the experts conclude that these technologies pose an existential threat to humanity.

The Social Dilemma premiered at Sundance back in January, but it officially opens to the public on Netflix on September 9. The film is actually more of a hybrid documentary-drama, weaving in interviews with some of the tech industry’s key movers and shakers with fictional reenactments that illustrate “the dangerous human impact of social networking.” 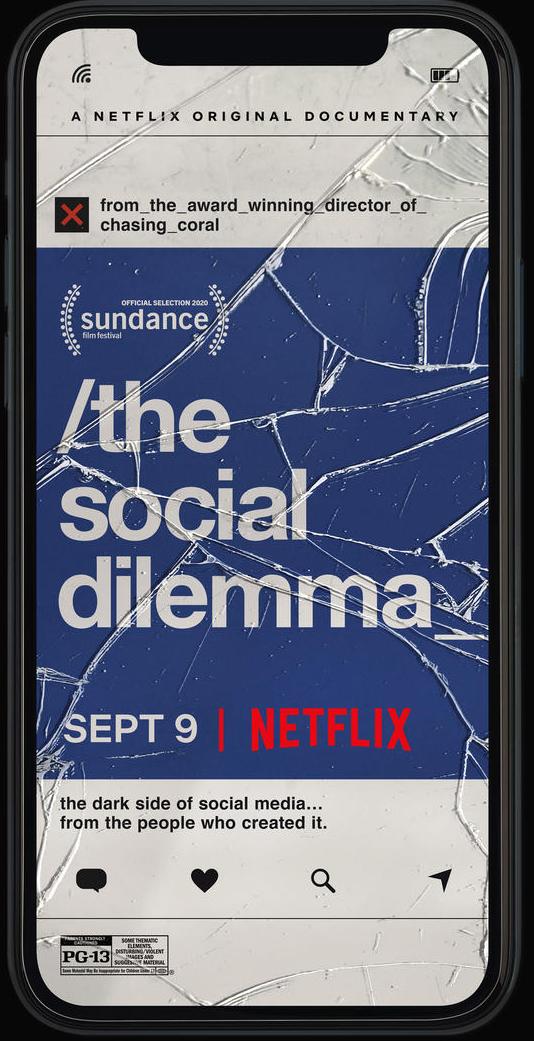 Above: The Social Dilemma

Harris, who has since left Google and launched the Center for Humane Technology (CHT) to lobby for positive technological change, plays a starring role in The Social Dilemma, discussing his initial efforts to enforce change at Google through his now widely circulated presentation.

“[The presentation basically said], never before in history have 50 designers — 20- to 35-year-old white guys in California — made decisions that would have an impact on 2 billion people,” Harris tells viewers. “Two billion people will have thoughts that they didn’t intend to have because a designer at Google said ‘This is how notifications work on that screen that you wake up to in the morning.’”

Software engineer Justin Rosenstein is credited with developing early Google products such as Gmail Chat before heading to Facebook, where he helped create the original “Like” button. Rosenstein, who now heads up enterprise productivity platform Asana, has been an outspoken critic of smartphones and social networks, and in The Social Dilemma he notes that while such technologies were typically created with good intentions, they have ultimately create severe unintended consequences.

“When we were making the Like button, our entire motivation was ‘Can we spread positivity and love in the world?’,” Rosenstein said. “The idea that fast-forward to today, and teens would be getting depressed when they don’t have enough Likes, or it could be leading to political polarization, was nowhere on our radar.”

It would be somewhat incomplete to discuss the pitfalls of online technology without acknowledging the many benefits it brings. And therein lies the ultimate problem — smartphones offer tremendous utility, making them indispensable for billions of people around the globe.

“A lot of what we’re saying sounds like it’s just this one-sided doom and gloom,” Harris said. “It’s confusing, because it’s simultaneous utopia and dystopia. I can hit a button on my phone and a car shows up in 30 seconds and I can go exactly where I need to go. That is magic. That’s amazing.”

Back in 2012, Facebook and the University of California published a study exploring the impact that online activity has on real-world actions, using the 2010 U.S. congressional elections as the focal point. The results were fairly positive, with roughly 340,000 extra people turning out to vote due to a single Facebook message on election day. Moreover, the study found that the “closest Facebook friends exerted the most influence in getting users to the ballot box.”

While few people would argue against any initiative that gets more people out to vote, the ability of social media platforms to influence people at such a great scale — without the individual knowing that they are being manipulated — is what scares many in the technology industry.

There is a growing sense that social media and other online technologies pose an existential threat to humanity. Tim Kendall, who was director of monetization at Facebook before joining Pinterest as president, said that one possible near-term effect of online platforms’ manipulative and polarizing nature could be civil war. And Microsoft researcher, computer scientist, and author Jaron Lanier looked further to the future, adopting an even bleaker outlook.

“If we go down the current status quo for, let’s say, another 20 years, we probably destroy our civilization through willful ignorance, we probably fail to meet the challenge of climate change,” Lanier said. “We probably degrade the world’s democracies, so that they fall into some sort of bizarre autocratic dysfunction. We probably ruin the global economy, we probably don’t survive. You know, I really do view it as existential.”

In many ways, The Social Dilemma serves to do for technology and society what Al Gore’s An Inconvenient Truth intended to do for climate change — it’s a call to arms that strives to provoke a real response from lawmakers, companies, and the public at large before it’s too late.

Games Inbox: Is The Last Of Us Part 2 on PS5 a good idea?