The Witcher 3: How To Beat Olgierd Von Everec

Olgierd Von Everec has been deemed one of the most challenging human opponents Geralt may face in The Witcher 3. The witcher meets Olgierd after picking up Evil's Soft First Touches, a contract posted at the Seven Cats Inn that talks of a monster dwelling in the Oxenfurt sewers. As you may already know, this isn't any ordinary contract, but the introductory quest to The Witcher 3's Hearts of Stone expansion.

Encountering a couple of surprises and the expansion's first boss fight against a Giant Toad Prince in the sewers aren't the only trials Geralt will face in this misleading monster contract. Geralt will have to endure imprisonment aboard a ship, a timely shipwreck brought about by a mysterious acquaintance, and a second boss fight against an Ofieri Mage before returning to settle his contract with Olgierd.

No one who has been tossed through the wringer like that would appreciate another setback before being able to cash in their day's work, so you can imagine Geralt's dismay when he returns to find his contractor's current lodgings ablaze. He's even less enthused by the boorish manner in which Olgierd's ruffians are conducting internal affairs. With his patience wearing thin, Geralt will have to choose his words wisely — unless, of course, he's looking for a fight.

How To Start The Fight with Olgierd 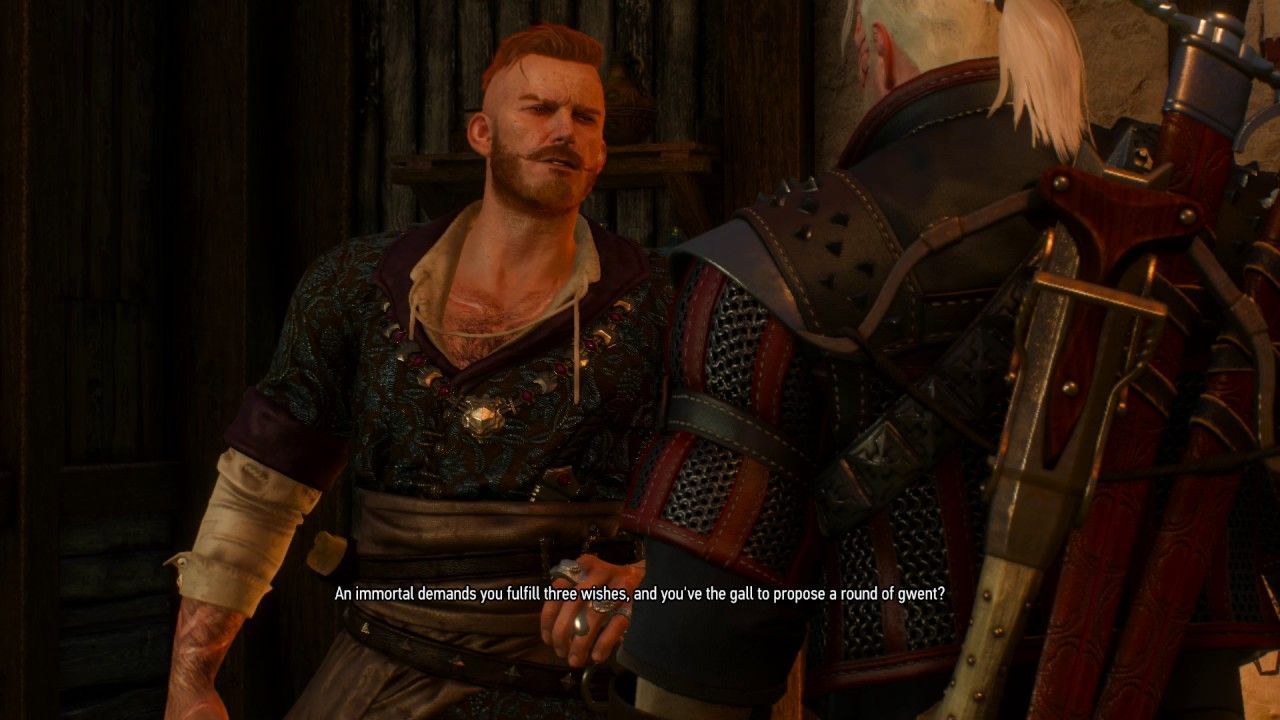 It would be pretty amazing if Geralt could start a clash of blades over a round of Gwent. Sadly, that's not what gets tempers flaring in this scenario. With his white knight complex poking through, Geralt once again sticks his nose into personal strife when he interrupts an intergang beheading.

It's peculiarly easy to avoid a showdown against Olgierd in this situation as most decisions will lead to the gang member being executed and Olgierd simply carrying on with business as usual. However, if Geralt gets edgy with the ruffians, tensions will rise, and Olgierd will emerge to break things up by challenging Geralt to a duel himself. Plenty of players missed this fight entirely on their first playthrough, so here's how Geralt needs to approach the conversation if he wants to instigate the duel.

Geralt can respond however he likes to start with; the conversation will heat up all the same.

If Geralt does his best to remain diplomatic or reconsiders and washes his hands of the mess, the condemned gang member will be executed, and Olgierd will appear ready to carry on his dealings with Geralt. However, by choosing option two, Geralt will rile up the ruffians causing Olgierd to emerge and challenge Geralt in their stead, offering to free the condemned ruffian if Geralt can best him.

How To Beat Olgierd Von Everec 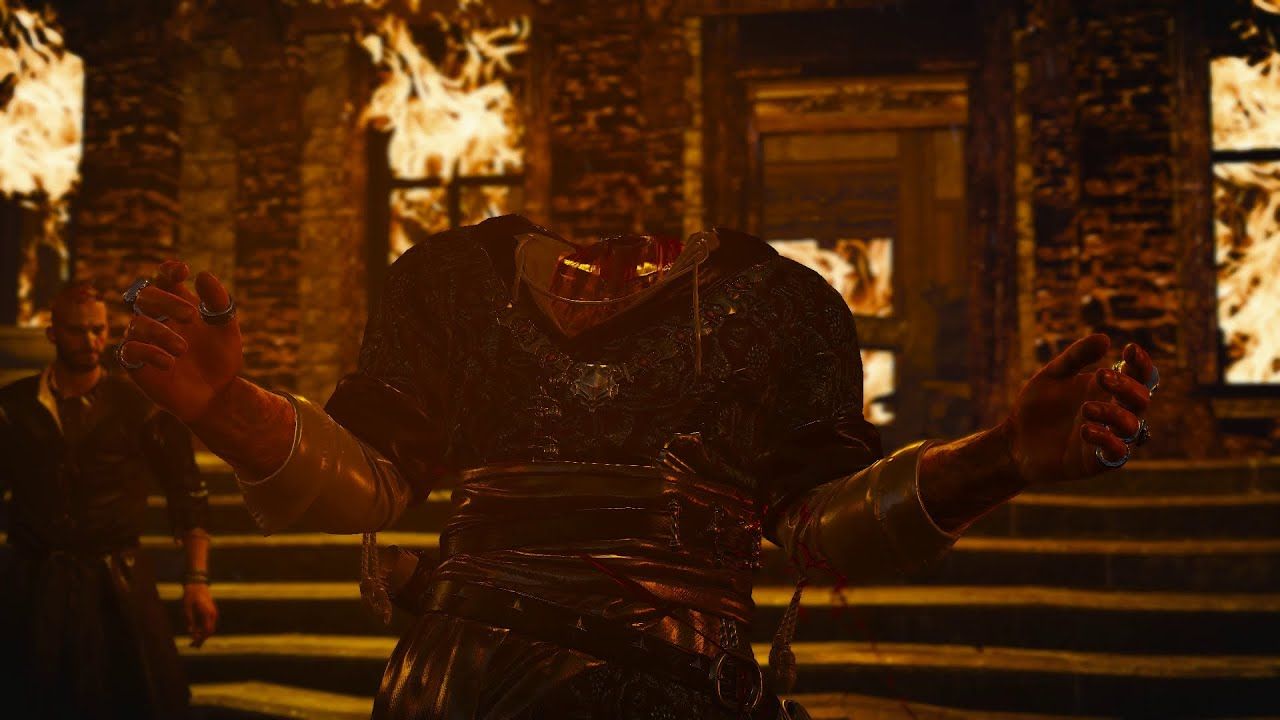 Every good witcher knows the key to surviving a fight lies in making adequate preparations, and as Olgierd's immortality places him among the toughest humans Geralt will face in The Witcher 3, he won't want to skimp on this step in the given situation. Geralt may want to stress his toxicity threshold for this fight, and he'll likely find himself casting a lot of signs, which means he'll need to consider his armor choice to facilitate heavy sign usage.

Naturally, the Griffin School armor set is the best for sign builds, and the benefits of having the entire 6-piece Grandmaster set equipped will be a great help in this fight. Though if he's not already geared for sign usage and you like Geralt's current setup, he should be able to manage as long as he throws back a few witcher decoctions.

Witcher Decoctions are the most crucial tool to ensure Geralt has enough of. Luckily, this isn't too difficult if you're playing on any difficulty besides Death March as Geralt's potion stores automatically replenish after meditation, as long as he's got a bit of hard alcohol on hand. You'll just need to make sure he has already brewed the ones he'll want to use in the first place. Here are a few suggestions of decoctions to throw back in order to prepare for this specific fight.

As we've already mentioned, sign usage will be key to gaining the edge in the duel against Olgeird Von Everec. He hits hard, able to lay Geralt out in one blow with almost all of his attacks. This makes using the Quen shield an imperative, as it will be a small way for Geralt to inflict damage while constantly protecting himself.

Olgierd is capable of taking on a noncorporeal form momentarily while he dashes from one point to the next finishing in an attack, much like how Ciri blinks around the battlefield. This makes Olgierd incredibly difficult to strike, but it's possible if Geralt places an upgraded Yrden trap in his path. The Yrden trap can force Olgierd back into his corporeal form mid-dash, which also causes him to choke up and begin spluttering for a moment. Interrupting Olgierd's dash is the best way to open Olgierd up for a short combo of fast and strong strikes.

Geralt will have to remain patient and find a rhythm to the battle that allows him to whittle down Olgierd's health while always remaining on guard. Still, with consistency and determination, Geralt is entirely capable of putting Olgierd Von Everec in his place. The noble ruffian will then pay up Geralt's promised reward, and after a run-in with Gaunter O'Dimm, Olgierd will task the witcher with fulfilling the first two of his three wishes. These also turn out to be more than Geralt thought he was signing up for, so if you need a hand, check out our walkthroughs for Dead Man's Party and Open Sesame!