Things We Wish We Knew Before Starting Moving Out

Moving Out is the type of game that will simultaneously stress and calm you, and that's because much of the game comes down to moving out furniture as quickly as you possibly can. Moving Out is a lot of fun to play with friends since there's a lot of coordination involved, something which not many of us are known for. However, you can also play all the stages alone if you prefer.

All the little pieces like the different characters to unlock – and the ability to design your own character – coupled with the extra minigame mode that unlocks with story progression, make for a great game choice to play if you only have a few minutes to spare. You can rush in blind and hopefully stumble your way through, although making a note of these tactics will help. 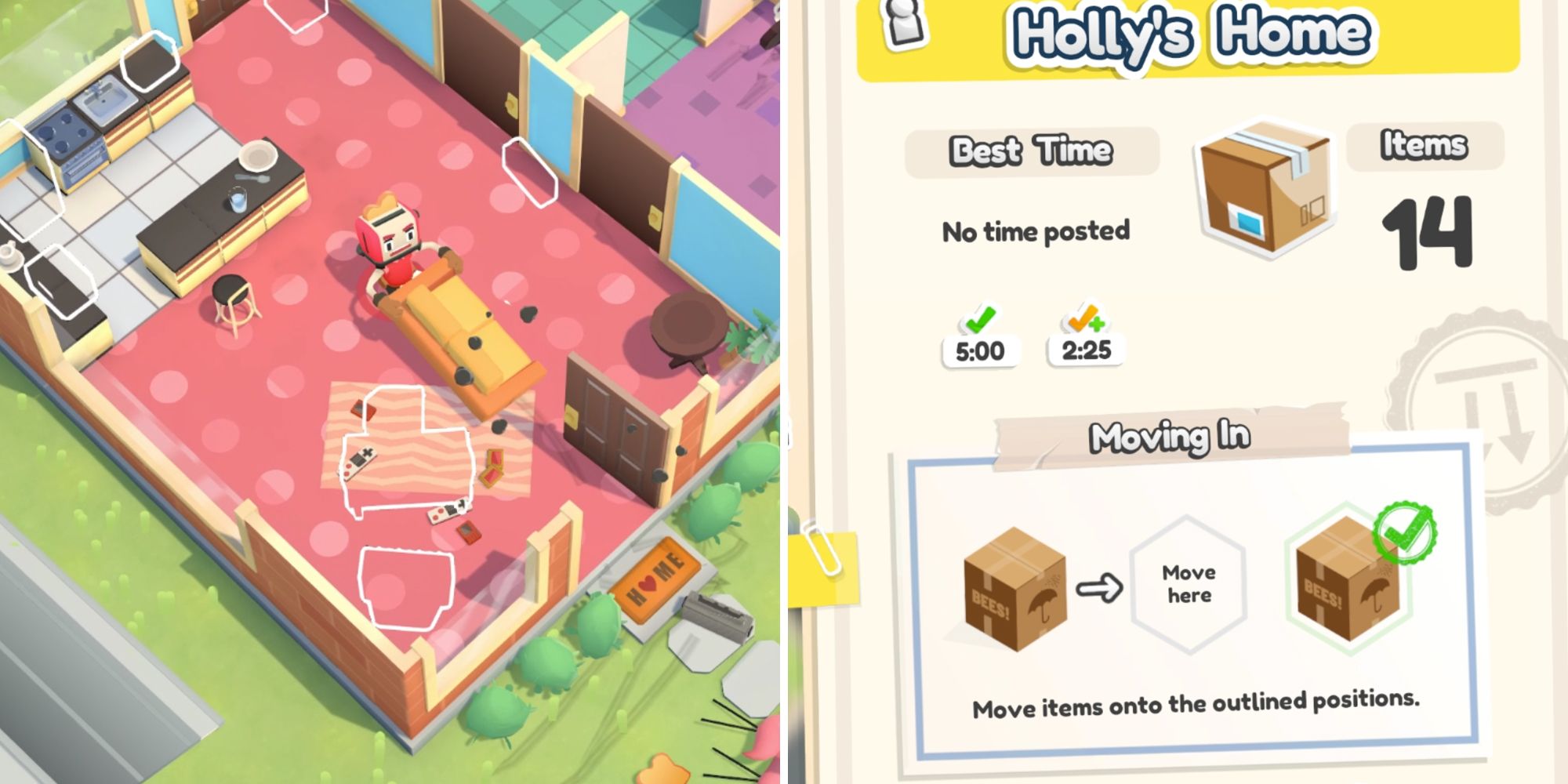 Moving In isn't nearly as tricky as Moving Out. You don't have to be perfect with how you place down the items, and you'll most likely even get to keep all the windows intact since you won't be jumping through them in a ploy to beat the strict time limits. It's a slight detour from the classic style of the game but comes at just the right time to mix things up and make the experience more satisfying. 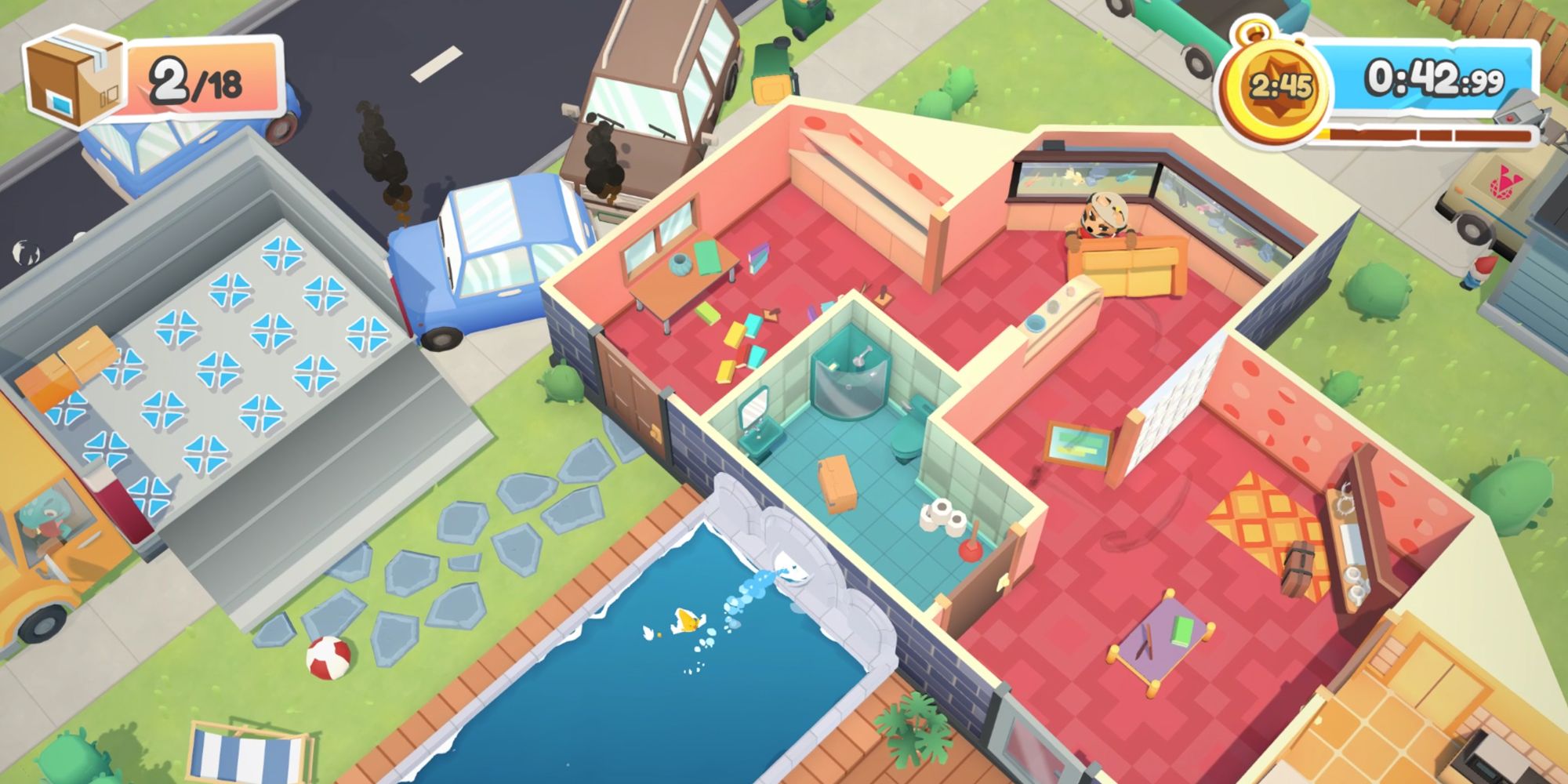 There are a whole bunch of ways to exit the house without using the doors and you'll be making use of these other options a ton because of the time limit. Although sometimes, this won't be the case. With heavier objects like chairs and tables, the only easy way to exit the premises is through a door. Unfortunately, there are usually tight corners that are a pain to get through before these doors.

One trick that helps is while turning a tight corner and holding onto an item, press the jump button as you move, and you'll move a little bit faster. It doesn't reduce a lot of time from the clock, but it can be what makes or breaks your run if you're about to run over the time limit.

Jumping is what you want to be doing most of the time in Moving Out. You jump to move faster, clamber over obstacles, turn tight corners, and jump through the windows to create shortcuts for yourself. You can also jump while holding smaller items, just don't try this with the fragile boxes. Jumping and glass don't really mix.

Jumping is the number one trick you need to use consistently and what will ultimately aid you in earning the gold ratings. Knowing which places are best to jump through and which shortcuts aren't worth risking your neck for is the thing to focus on when aiming for a higher score.

7 Check Out The Bonus Objectives 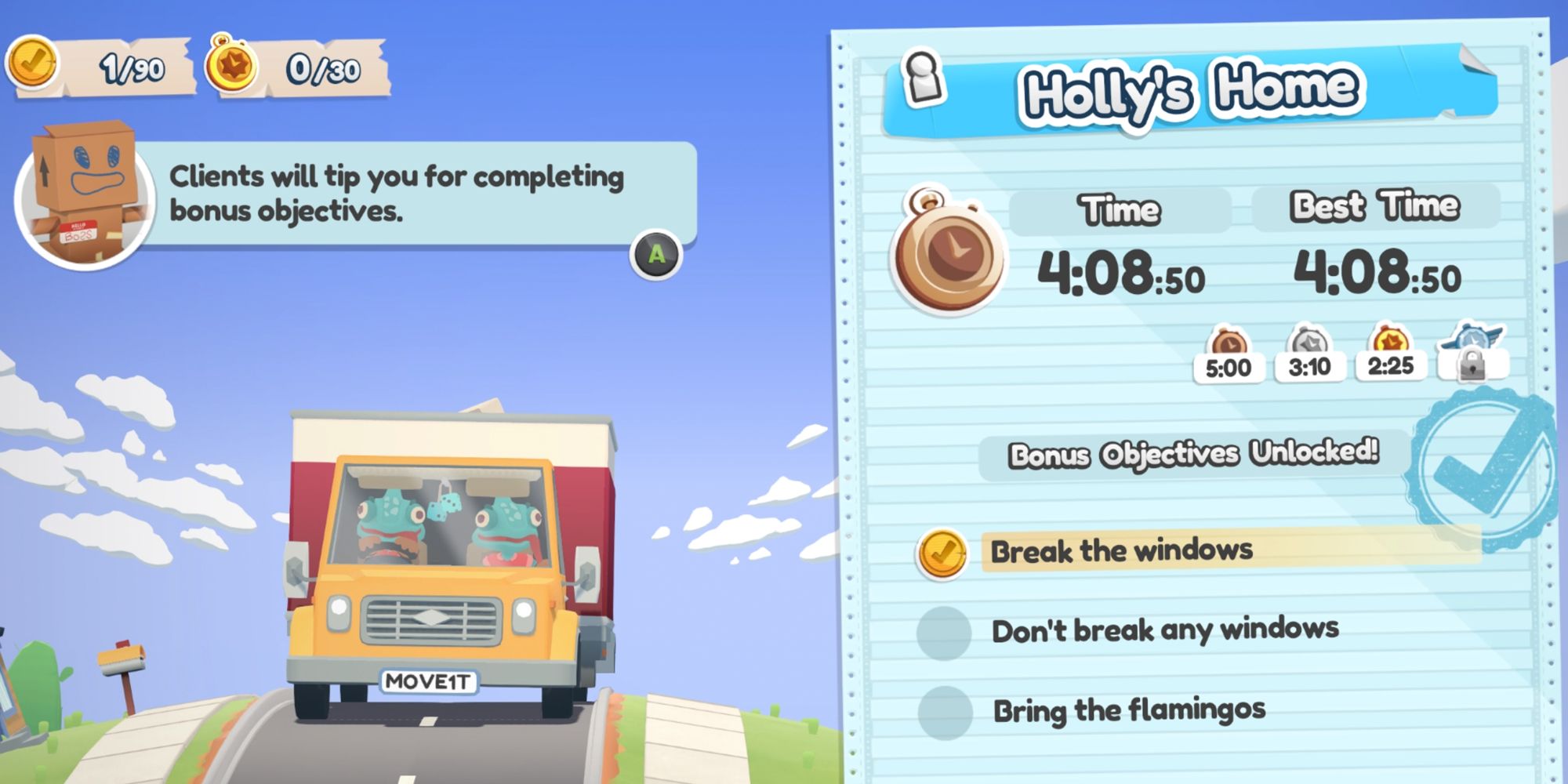 Once completing a level, the bonus objectives will unlock so you can see what you'll need to do to complete them all. You can still achieve all the goals on the first run of a stage though it'll be a little bit of a guessing game. The bonus objectives range from not breaking any windows to bringing the turtle that keeps nipping at your heels onto the moving truck with you.

Most of the objectives will hinder the time taken to complete a stage since it's an extra step of things to do, so it's best to go for these objectives on a run where you aren't aiming for the best possible score.

6 Keep An Eye On The Highlighted Items 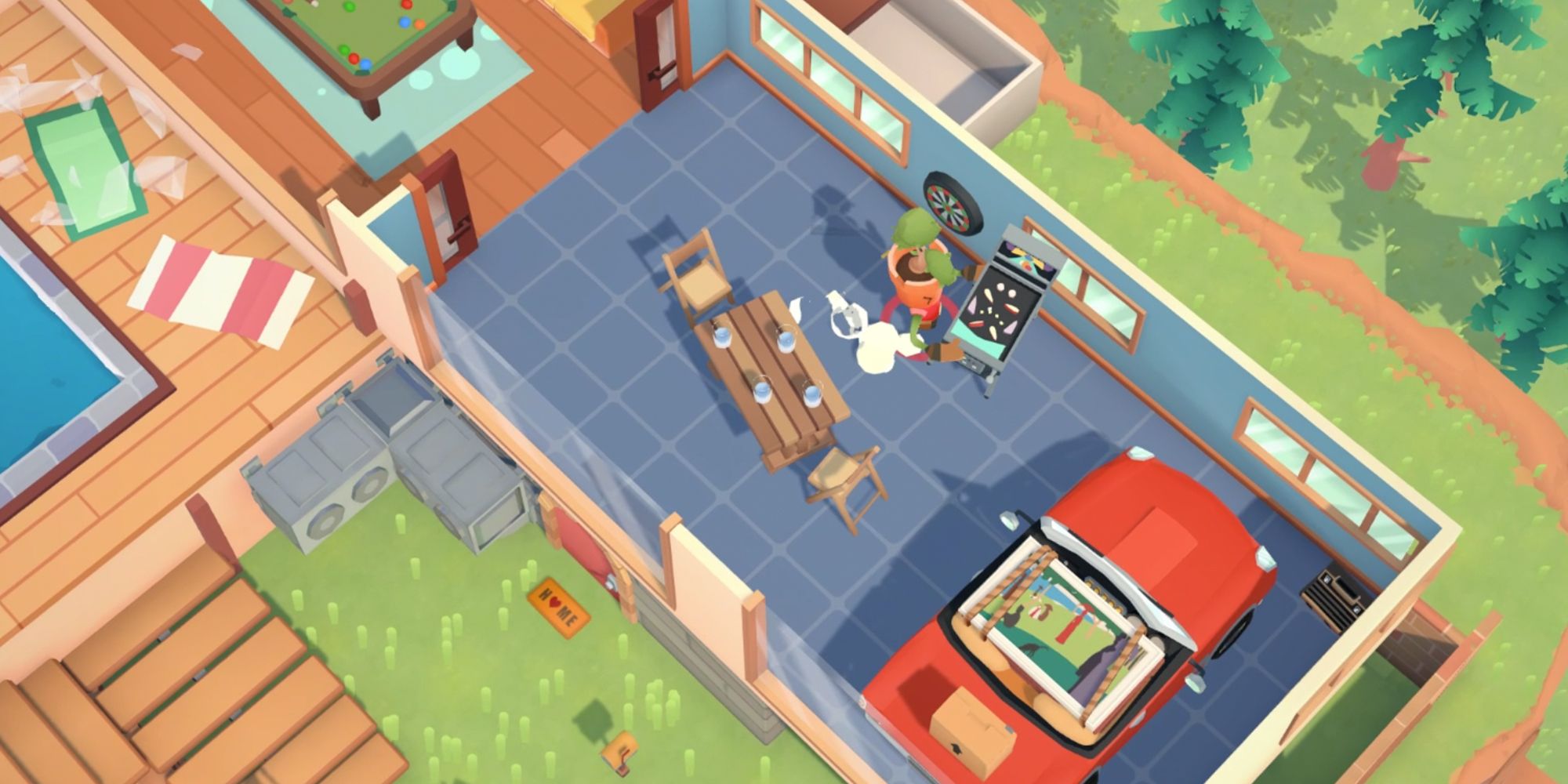 The highlighted items are all the things you want to bring back with you on the moving truck, but you can bring back other items if you feel like it. Some levels have animals that prove an annoyance as they get in your way… a lot, especially when you're trying to pick up some furniture and they keep pushing into you. If you want to bring back a non-required item, do so before placing the last highlighted one on the truck, as this will automatically end the level.

Some bonus objectives involve bringing back these extra items, like how in one stage a goal is to get the flamingo onto the moving truck which is just as chaotic as it sounds.

5 Break Down One Door 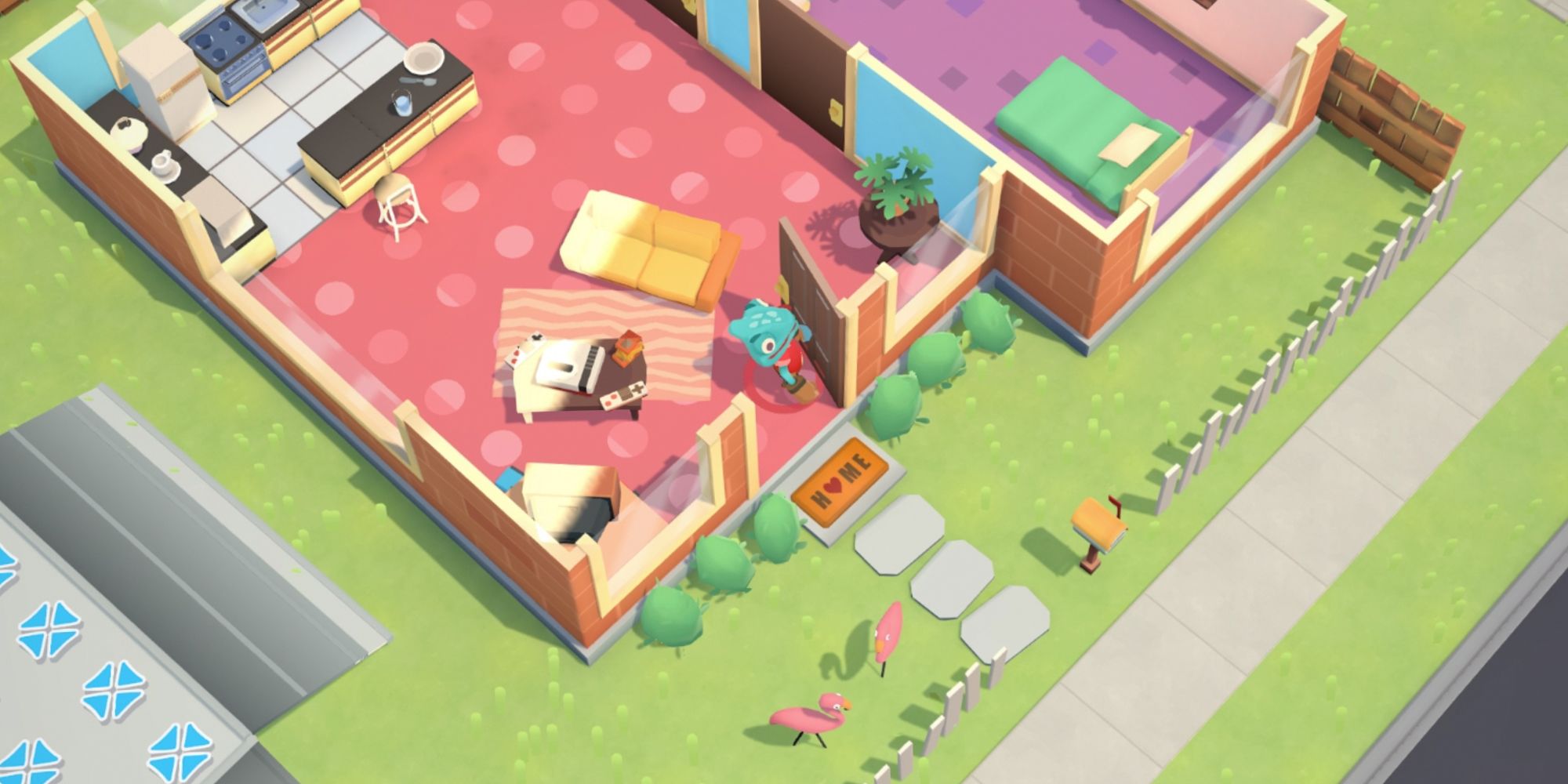 The doors in Moving Out become incredibly annoying when you're trying to move all the awkwardly shaped furniture through the small space provided. If you know you'll be using a door to remove things from the house, knock down one door to make this a little easier.

Whichever door will let you bring all the heavier pieces through without walking too far is the ideal one to break. You don't have to break all the doors as this will be a massive timewaster, just the one you'll be going through most often. 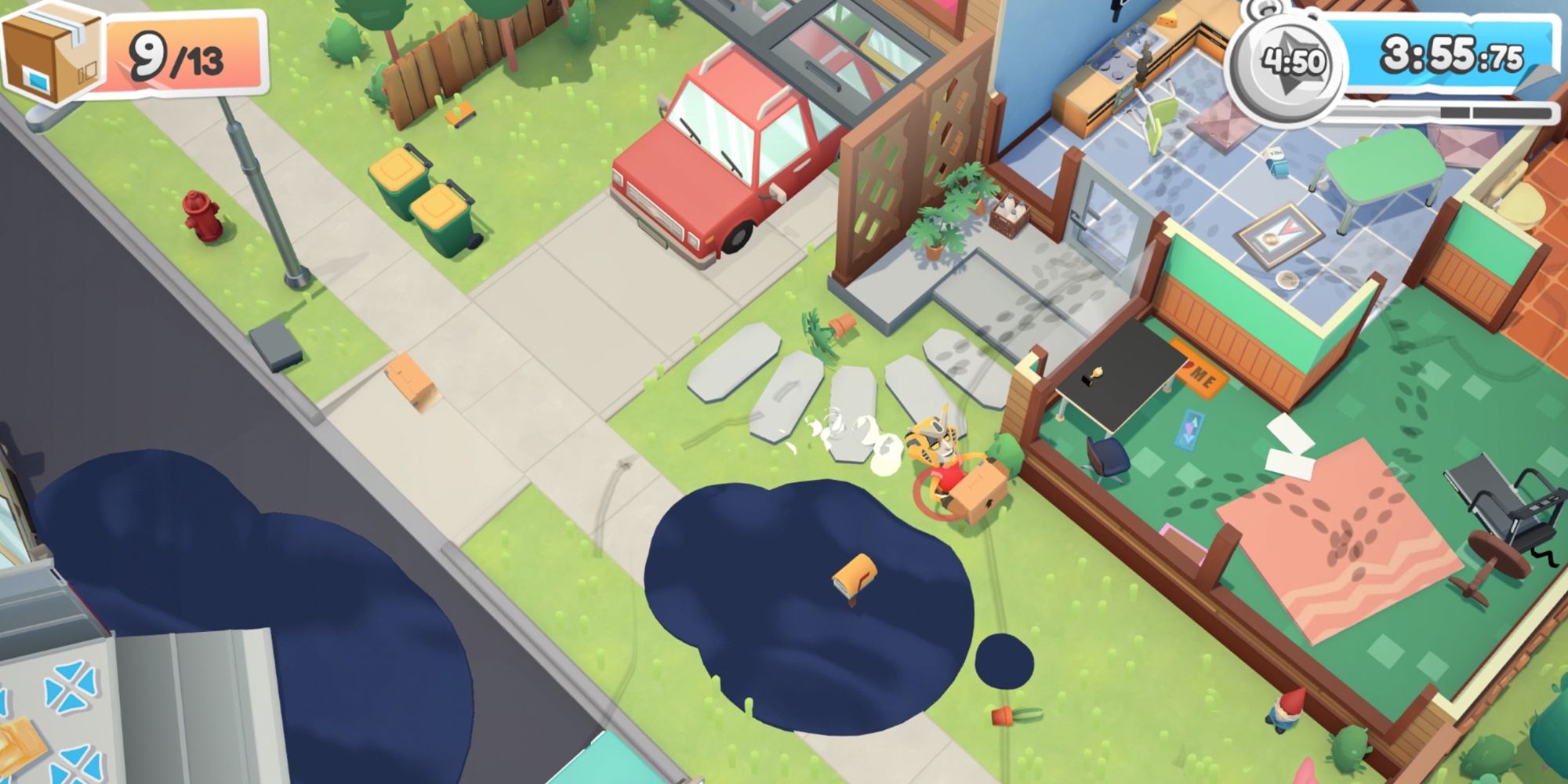 At the end of every stage, you'll be rewarded with either gold, silver, or bronze, where the faster the time is, the better chance you have of scoring gold. Now for the first run-through of every level, aim for silver but don't feel discouraged if you don't get it the first time. Learning little things that will help you reduce your overall time is easier while aiming for the middle option.

Practice different routes and find out which ones work best for you. Bringing all the items out of the house before packing them onto the truck is just one way of speeding up your time a little.

3 Have A System When Packing Items Onto The Truck 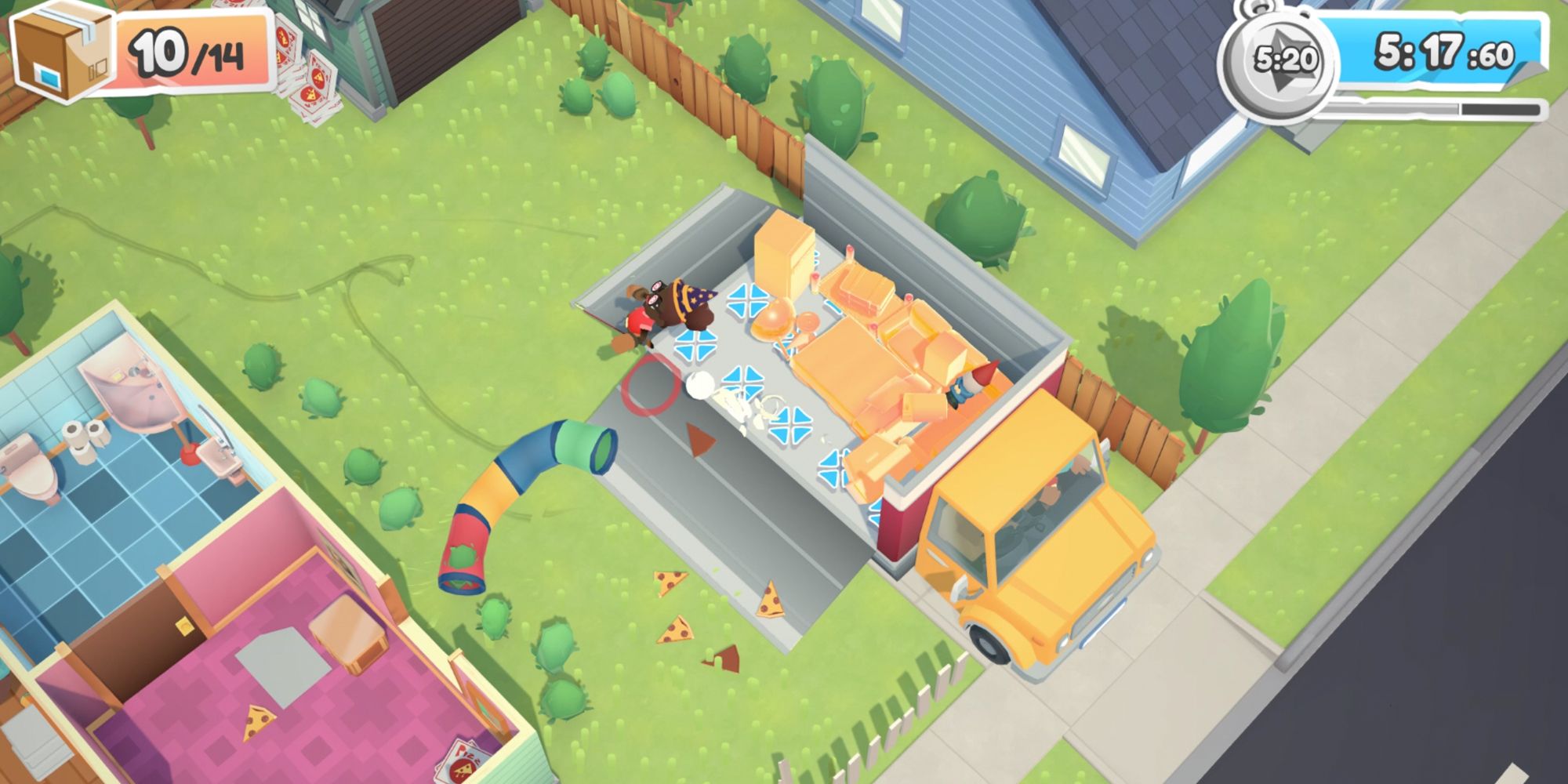 The general rule to stick with when placing items onto the truck in a specific way is as follows; first, get all the things near the truck before packing. So for smaller (non-fragile) items that you can throw, do those first, then bring over the fragile items and finally the heavy furniture – once doing this, place the big items onto the truck, trying to put them close together so as not to waste any room.

The most fun part is where you get to throw a bunch of stuff. Pick up any small items and throw them onto the heavy furniture. Don't worry about breaking these; the aim is to pack them as fast as you can. The final items to place onto the truck should be the fragile ones. There's less chance of them getting knocked over and broken this way, but don't throw these boxes. 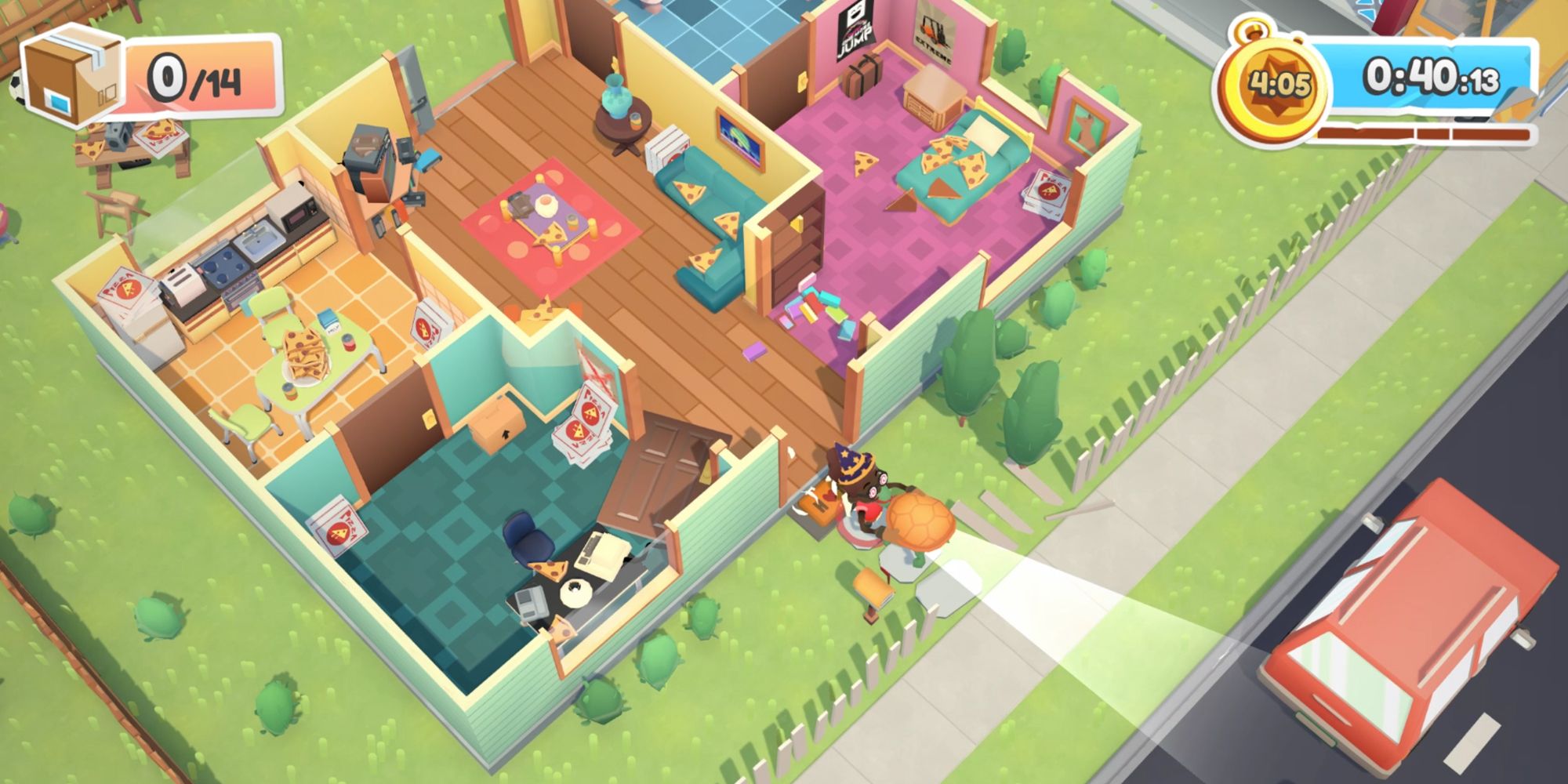 Just like how the jump button is essential, so is the throw button, as throwing stuff around is way quicker than moving everything manually. Throw non-fragile items out of windows and towards the truck; it is much faster that way and easier since you won't be getting stuck on all the furniture that just so happens to get in your way.

When there are animals present in the level, you'll probably want to toss them to the side too, it's not the best when you're about to head through the house's exit, and a persistent tortoise begins running in your direction. Although, you can even try to place it onto the moving truck if you want. 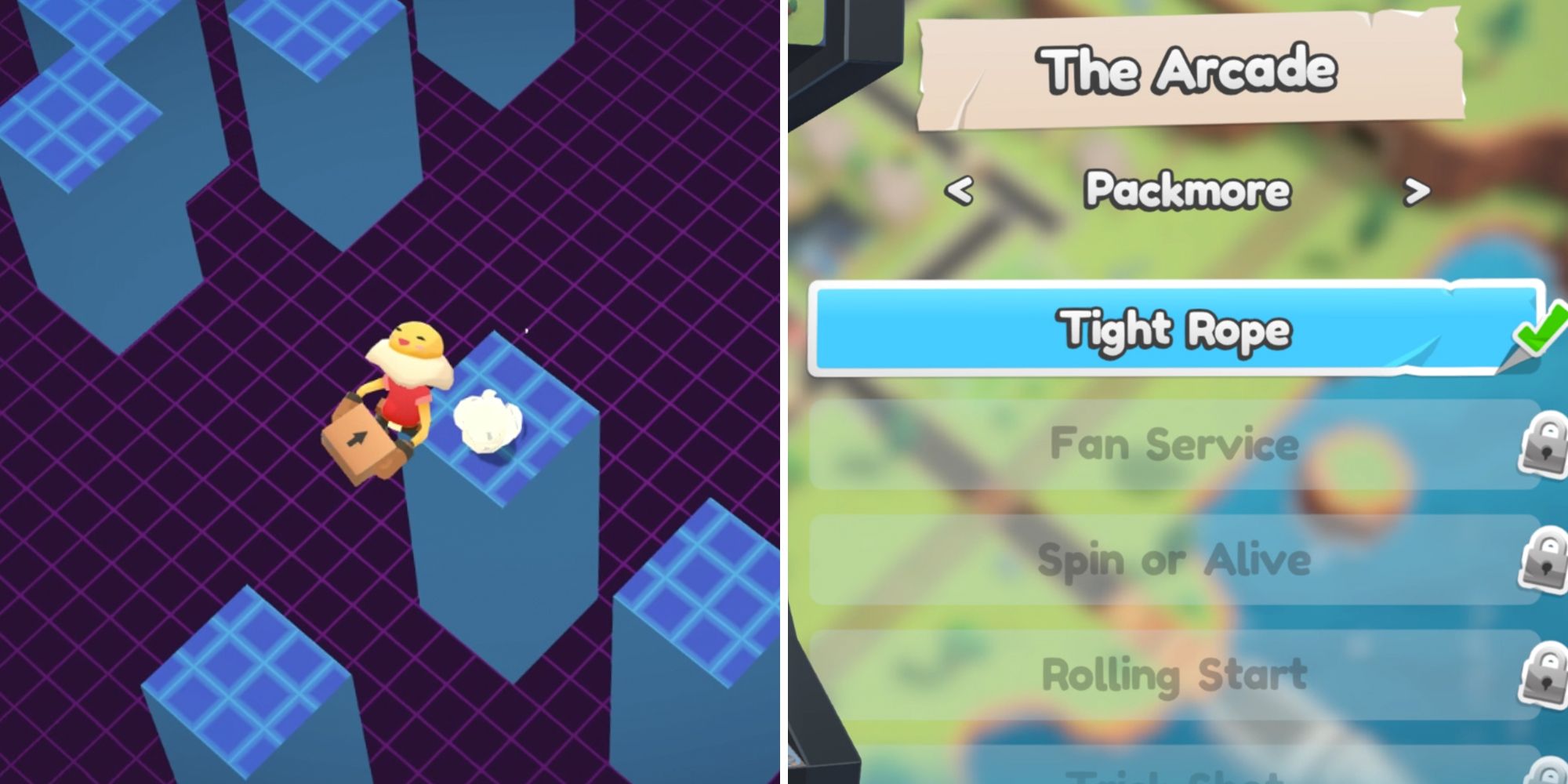 During the early parts of the game, you'll unlock a level in the arcade named "Tight Rope." The Tight Rope level and all the other minigames available are fun, short, and relatively simple to complete. These levels keep in line with the gameplay of the primary mode while providing a sweet break from the standard levels.

The main content of any game is always fun, but as soon as any side outings become available, it's hard not to rush to try them out at the first opportunity. Luckily, the side pieces of Moving Out are just as well-made as the standard gameplay.