This Weird Time Travel Adventure Makes Me Miss The Days When Konami Made Cool, Interesting Games

In 2003, Konami released a really strange game for the PS2. Shadow of Destiny (also known as Shadow of Memories in some regions) is an atmospheric adventure game about a guy trying to prevent his own murder, set across a variety of time periods—from the 1500s to the present day. Protagonist Eike Kusch, one of the worst designed characters in video game history, is repeatedly killed by an unseen assailant, including at the very beginning of the game. He's walking obliviously along a cobbled street in the historic German town of Lebensbaum, before suddenly slumping to the ground with a knife in his back.

This should be the end of Kusch and his stupid hair, but he's spared from oblivion by an eerie being calling itself Homunculus, voiced by Charles "It's-a-me, Mario!" Martinet. He wakes up in an otherworldly void, silent except for the ticking of a giant grandfather clock, and is gifted a device called a Digipad. With this, Kusch can travel back in time to avoid getting that knife in his back. But as he meddles with the space-time continuum, the town of Lebensbaum and the lives of the citizens who live there are altered too. Not that Kusch cares: he's a detached weirdo who doesn't seem to care about the temporal chaos he's causing. 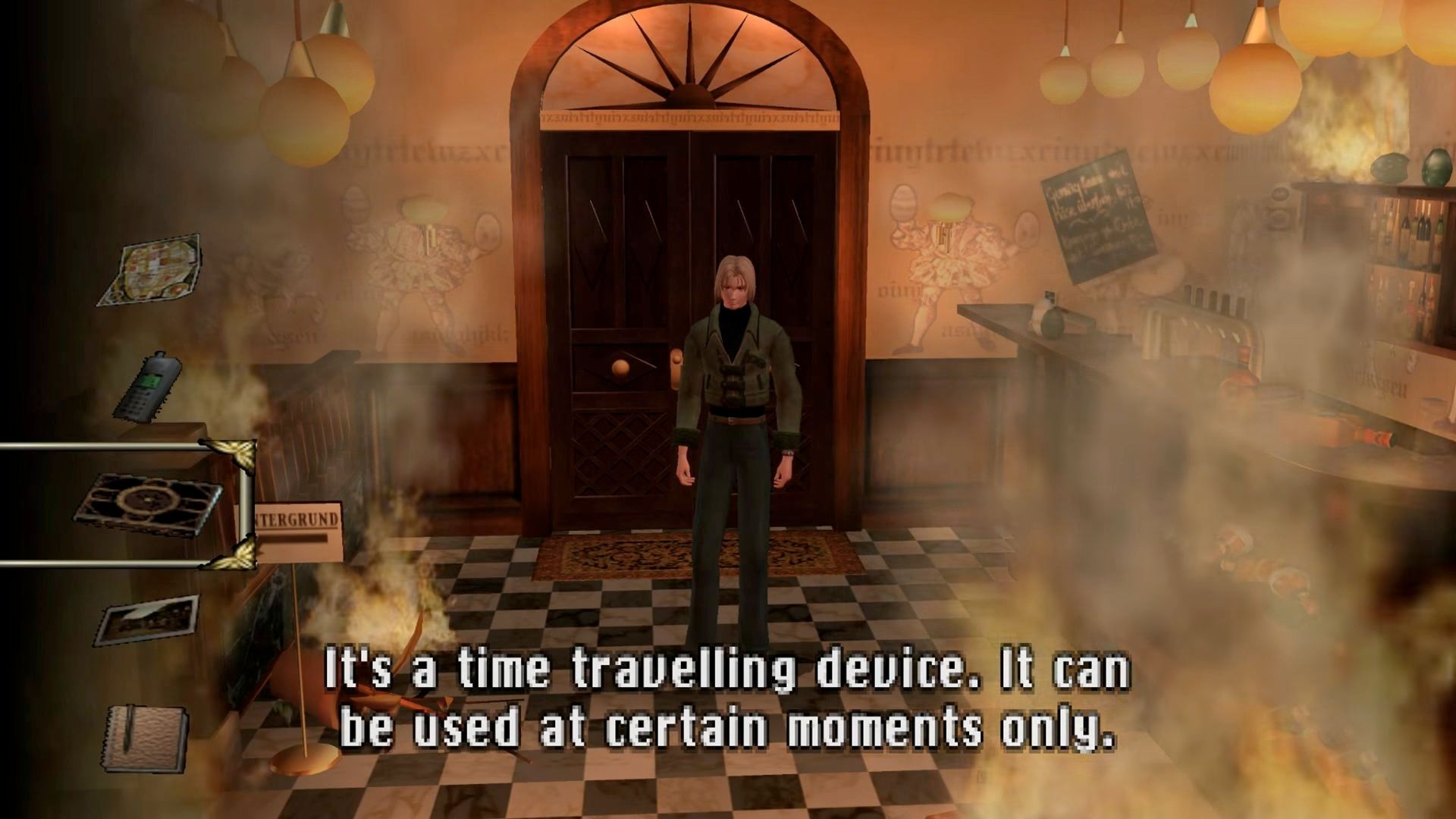 Every time Kusch survives a murder attempt, another is always lying in wait. In one chapter the killer strikes from behind a tree, and preventing this particular death is a perfect example of how the puzzles in Shadow of Memories work. (Also, of how ridiculous they are.) Kusch travels back to medieval times, finds the guy planting the tree, and convinces him to plant some flowers instead. Back in the modern day, the tree is gone, the killer has nowhere to hide, and Kusch survives. These kinds of interdimensional logic puzzles make up the bulk of the game, with a fair amount of slow-paced walking, talking, and exploration nestled inbetween.

This is not a pretty game. It was ugly even in the PS2 days. But it makes up for its blocky geometry and low-res textures by being incredibly atmospheric. Lebensbaum is an evocative setting, and the mood changes dramatically as you leap between time periods. In the 1500s everything is dark, gloomy, and sepia tinted. In the 1900s, the snowy streets are depicted in nostalgic monochrome. You spend a lot of time wandering around the place getting to know the locals (including their ancestors), which makes the city feel strangely alive. Getting tangled up in people's problems leads to some interesting side stories too. 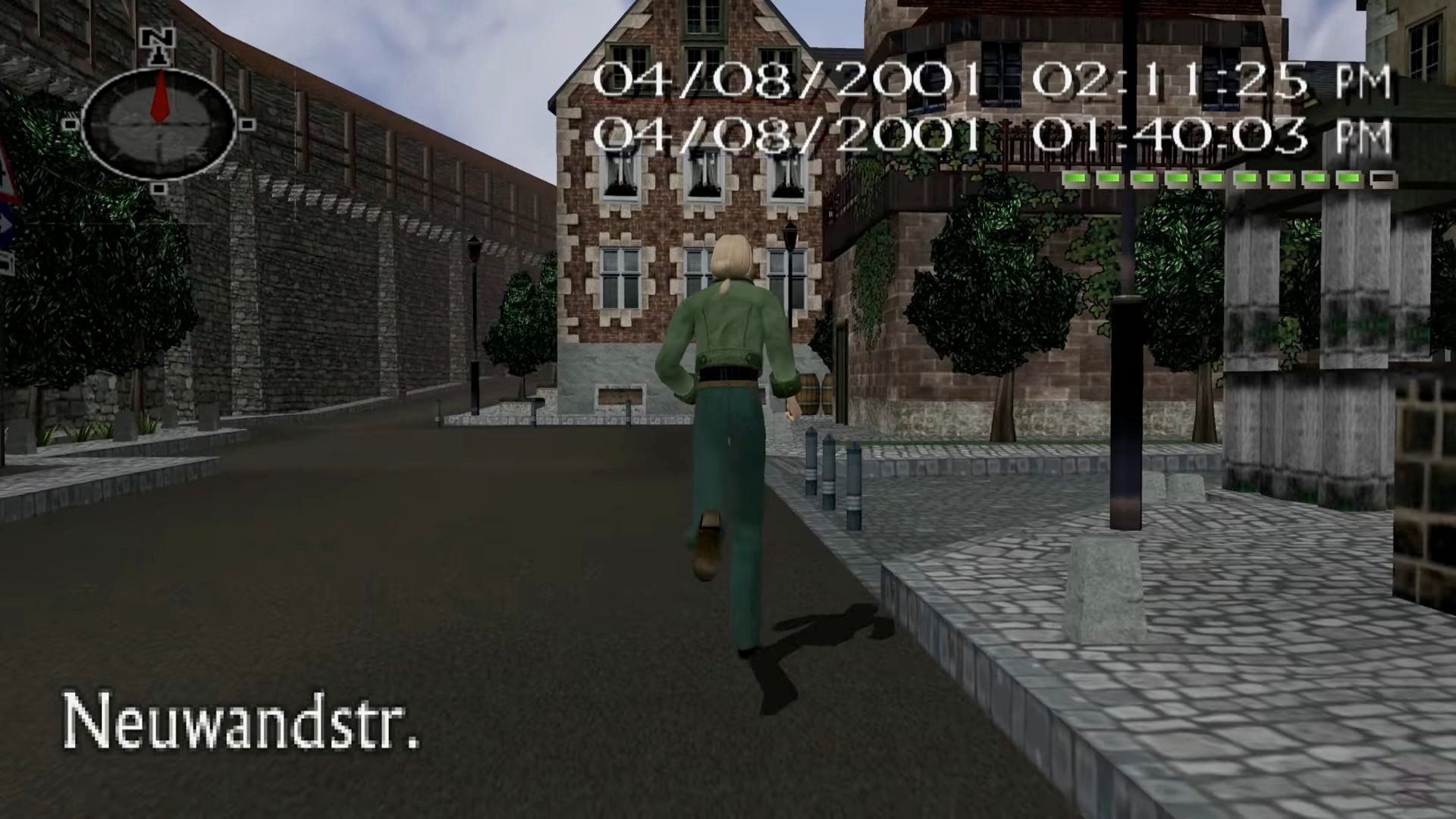 While the game is almost stiflingly linear, there are a few moments where you can be a little mischievous and cause a time paradox. In the first chapter you go into a local cafe and find yourself lying asleep on the table. If you touch your past self, reality implodes and you have to start over. There are moments like this throughout Shadow of the Memories, where you know doing something will break the timeline, but you do it anyway. If you can't help yourself, the game usually has some kind of amusing cutscene to reward your bad behaviour. To its credit, it really goes all-in on the time travel gimmick. You can have a lot of fun with it.

There's a lot wrong with Shadow of Memories. Eike Kusch is a deeply boring protagonist, the story is overcomplicated, and some of the puzzles are laughably contrived. But I love it regardless. Being able to freely explore Lebensbaum gives the game an enjoyably laid back rhythm, letting you figure things out at your own pace. It has a curious, eerie atmosphere that is completely distinctive. The time travel stuff is occasionally brilliant. There are eight endings too, and the story can spiral off into many unexpected (and often devastatingly bleak) directions. I've never played anything like it, and I doubt I ever will again.