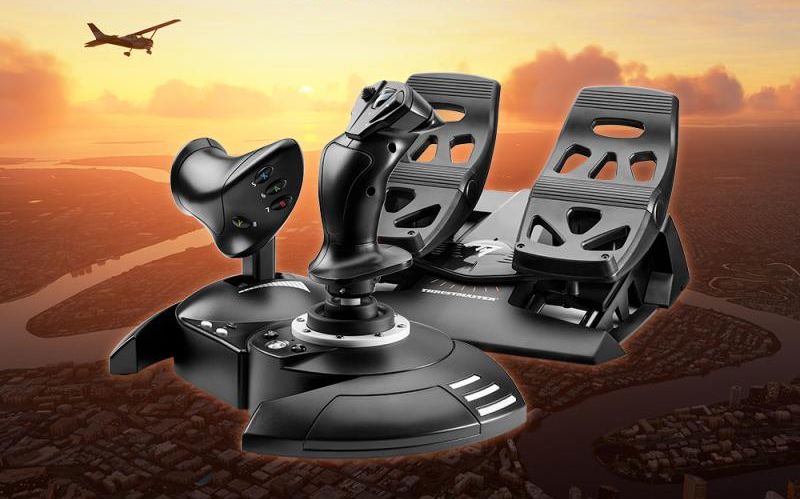 In our review of Microsoft Flight Simulator we mentioned that we’d been sent a T.Flight Full Kit X by Thrustmaster, in order to help with the review. However, we actually ended up not using it most of the time, because the experience was so different to that with a standard controller, and it would’ve unbalanced our view of the game. But before they ask for it back, we wanted to give it a quick review as it is a highly desirable piece of hardware.

The Full Kit X in question is a T.Flight Hotas One with a set of TFRP Rudder pedals. The Hotas One comprises a joystick and a throttle, which you can split apart or snap together into one unit. It’s available separately for around £90, which given the build quality and the niche nature of the device is a lot cheaper than we were expecting.

The Full Kit X is supposed to be around £150 but seems to be sold out everywhere in the UK at the moment, with eBay prices showing it going for upwards of £200. Although we should point out that both those prices are still less than some high-end racing wheel set-ups.

The reason for the sudden scarcity is obvious: Microsoft Flight Simulator has just come out on Xbox consoles and while the standard Xbox controller works perfectly well it’s clearly much better to have something that better approximates what a real aircraft uses for controls. Although, actually, we don’t think any of the aircraft in the game uses a joystick in real-life, which is more of a jet fighter thing, but instead a yolk you hold in both hands. (The Airbus apparently does use a joystick, with Thrustmaster having an entirely separate controller device that mimics that more exactly.)

The Full Kit X is compatible with both Xbox consoles and the PC, but unfortunately not any PlayStation consoles. It’s automatically detected by Microsoft Flight Simulator, although, as we mentioned in our review, it was a bit fiddly getting some of the menu control buttons to work through it before launch – although that seems to have been fixed now. The USB cable, to connect to the console, is also frustratingly short and you’ll probably need an extension lead.

If you connect the joystick and throttle together, they’ll sit perfectly happily on your lap, without the need to place them on a table in front of you. You can even tighten up the screws that connect them, if you want to ensure they never come apart by accident. Plus, you can adjust the tension in the joystick, if you want it to feel a bit looser or tighter (you can stop that sniggering right now).

The joystick feels reassuringly solid in your hand (really, just stop!), with several buttons dotted around, including one on the nose above the trigger and a ‘hat’ – a small four-way controller that effectively works like a D-pad.

The build quality on the throttle is equally good and while its three main positions (minimum, maximum, and half-power) click into place nicely there’s a lot of fine control possible if you want to adjust your speed more minutely. It’s also covered in buttons, including what is the equivalent of a shoulder button at the back, that flicks left or right with a satisfyingly subtle amount of resistance.

Most games nowadays, especially anything that might use a flight stick, have fully customisable controls but once Microsoft Flight Simulator detects the Full Kit X it uses a default set-up that works perfectly well until you feel it’s time to start some fine-tuning.

The joystick can also rotate about 90° at the base, for controlling the rudder. This works very well but if you do get the Full Kit X then that’s where the pedals come in. Not only do they pivot up and down but you can move them forward and backwards too, although they’re connected so that if you push the left one forward the right one moves in the opposite direction.

Between this and the joystick and throttle you have far more control over your aircraft than would ever be possible with a generic controller and while the Full Kit X is an extravagance, if you can even get hold of it, the Hotas One on its own is the main part of the package anyway.

As much as we enjoyed messing around with Microsoft Flight Simulator the purposeful lack of gameplay quickly saw our attention waver. What we were far more interested in was using the Full Kit X with Star Wars: Squadrons. Switching the game on, the controller and pedals are both recognised automatically and the amount of fine control you’re afforded adds a whole other dimension to the control system.

The pedals are also a lot more fun than in stuffy old Microsoft Flight Simulator, as they’re used to roll the whole spacecraft, which makes taking advantage of unfettered flight in 3D space even easier. It’s just a shame that the Full Kit X isn’t compatible with the PlayStation, as using it with a PlayStation VR headset would’ve created the ultimate space flight simulator experience, and one from which we might never have emerged.

Modern joypads are incredibly versatile and both these games work very well with them as the default controller, but whether it’s a digital joystick for fighting games or a racing wheel for driving games, specialist equipment will always be better. It’ll always be more expensive too but with the Hotas One, if not the Full Kit X, it seems worth every penny. Especially once we track down an Xbox One copy of Ace Combat 7…