In Magic: The Gathering, demons and Black go hand in hand. At this point, whenever a new set is released, it’s to be expected that a new and impressive demon will come along with it. While some demons have been ultimately unimpressive duds, other have made huge splashes, going as far as to warp formats and spawn entire decks around themselves.

So today we’re going to count down the best of the best when it comes to big and bad demons in our top ten strongest demons in Magic: The Gathering! 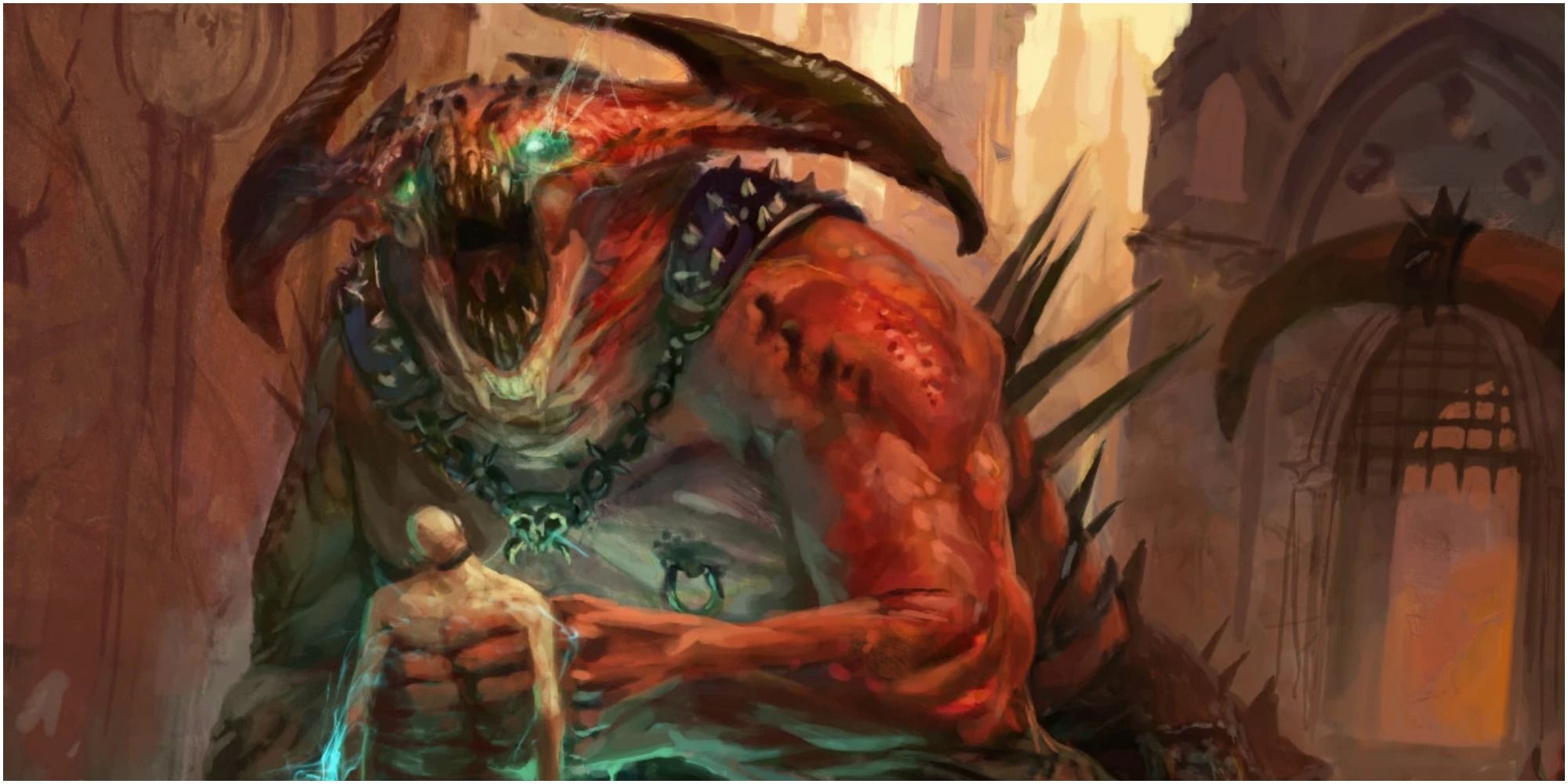 Not all of the most most powerful Demons are necessarily mono-black, and Sire of Insanity is a perfect example why. Toting a simple yet potent ability, Sire of Insanity causes players to discard their entire hand at the end of each players’ respective turn.

This effect will often not hinder those who play the card, as many Rakdos decks would rather play their cards as quickly as possible without caring too much about their hand size. Conversely, Sire of Insanity throws a huge wrench into many of you opponents plans, causing huge problems for control decks and other strategies that would want to draw numerous cards. 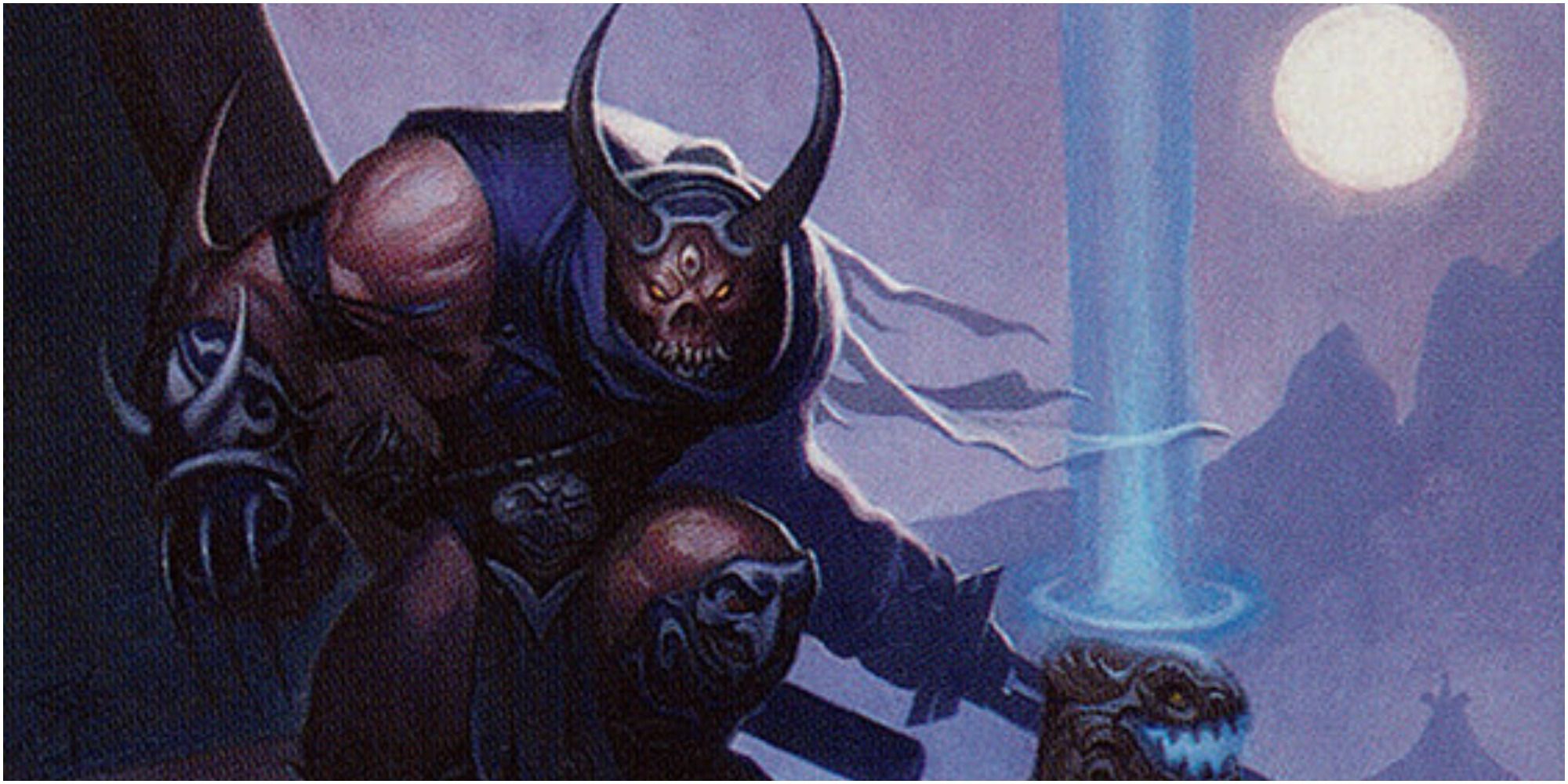 Differing greatly from many of the more traditional demons, Silent-Blade Oni is a demonic ninja with a potent Dimir ability. Like many other ninjas, Silent-Blade Oni possesses ninjitsu, allowing it to be cast for a discount, replace an unblocked creature you control. This allows for you to play all kinds of potential mind games with your opponent when it comes to combat.

When Silent-Blade Oni deals combat damage to a player, you look at that players hand, giving you tons of additional information. Then, you can cast any non-land card from that player’s hand without paying its mana cost! This is quite deadly, as this is a repeatable effect that can steal many impactful cards from your opponent before they can even cast them! 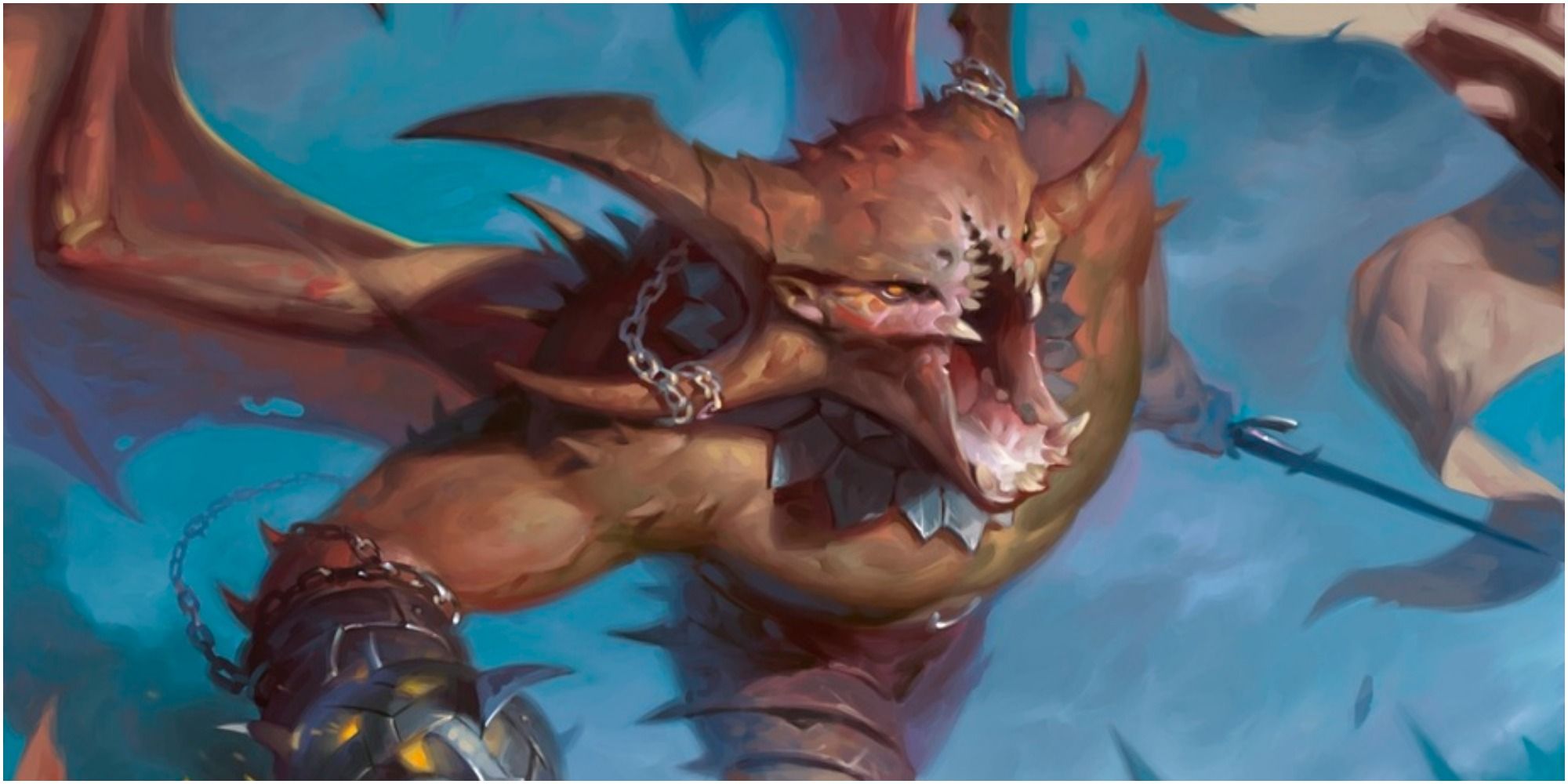 Spawn of Mayhem exemplifies black’s capabilities as a quick and aggressive color. A 4/4 with flying and trample with no drawback, while Spawn of mana costs four mana to cast, its costs only three mana if an opponent had lost life that turn.

As if this wasn’t already enough bang for your buck, Spawn of Mayhem deals one damage to each player at the beginning of your upkeep, and in case your life total is ten or lower, it will grow larger through +1/+1 counters. 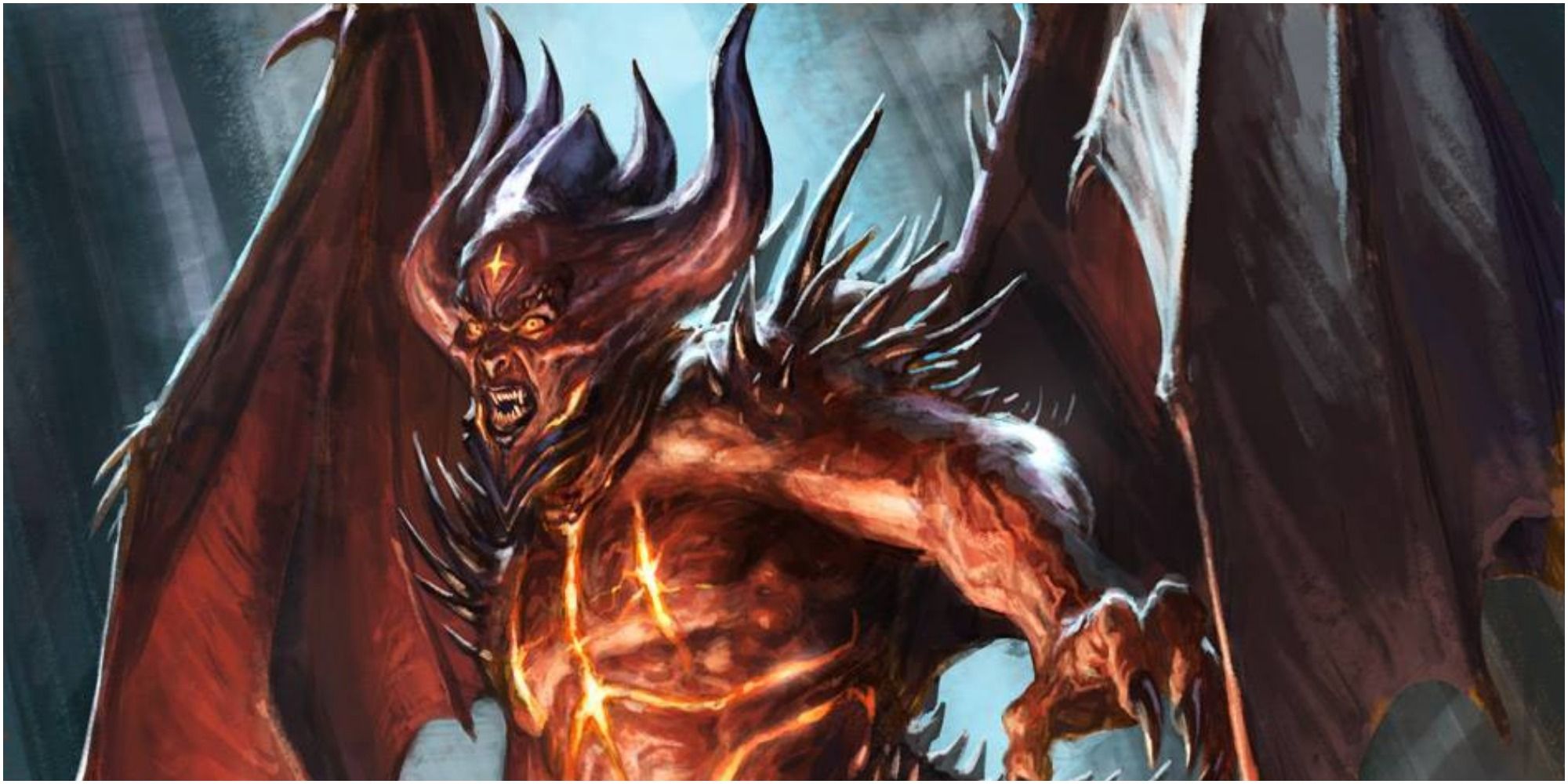 The first legendary demon on our list, Ob Nixilis is a character who has been depicted in numerous cards across Magic, both as a creature and Planeswalker. This specific incarnation, Ob Nixilis, Unshackled is a physically strong creature with a potent one sided ability that greatly hinders your opponents.

Though Ob Nixilis receives a +1/+1 counter whenever a creature dies, much of his strength lies in his ability to deal ten damage to your opponents whenever they search their library. This makes all “tutors” extremely risky to use, and even has the capability of shutting of numerous lands that are sacrificed to find lands of that player’s choice.

6 Lord of the Void 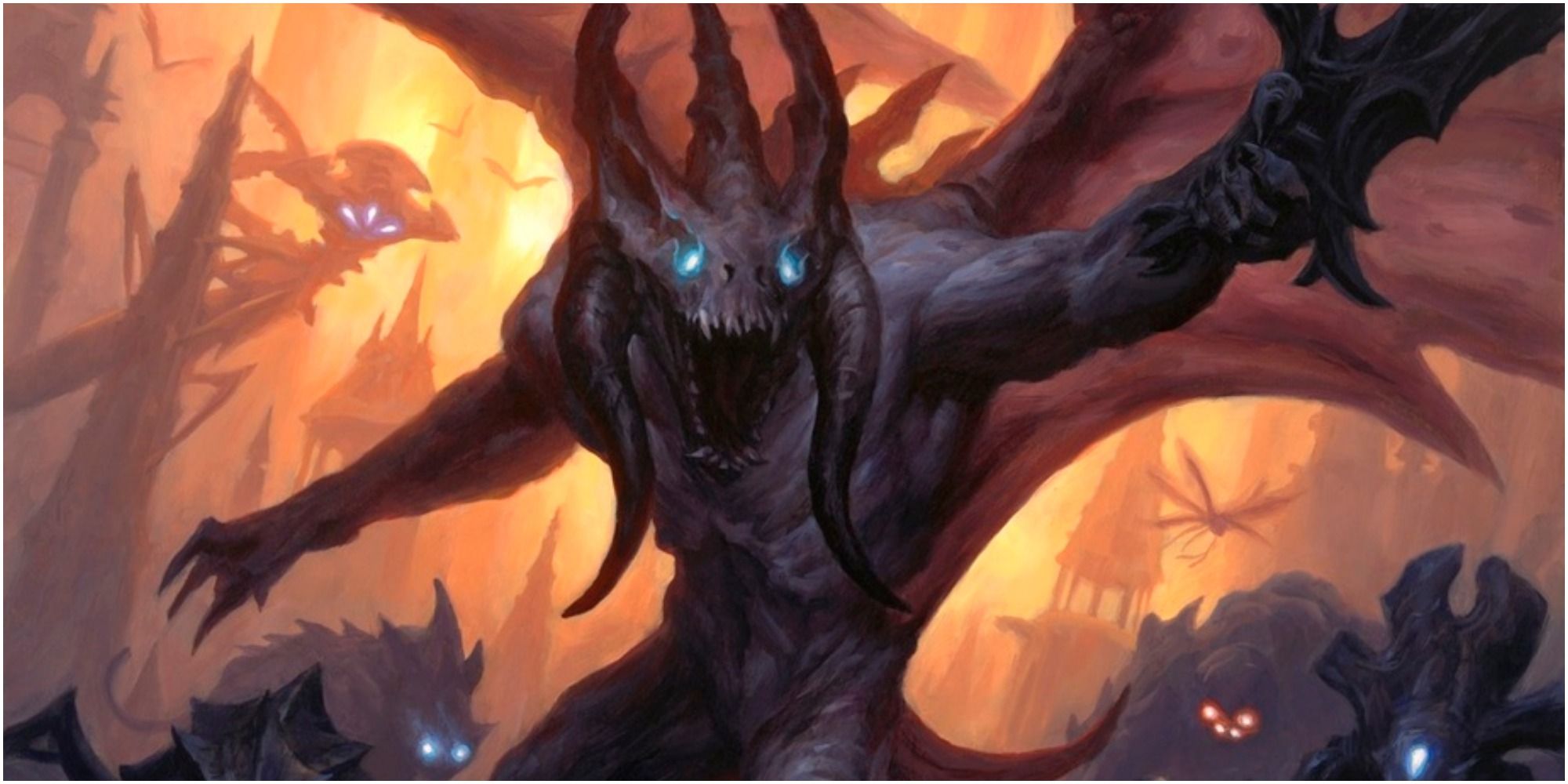 Though Lord of the Void costs a hefty seven mana, the investment for this impressive demon is well worth it. A 7/7 with flying, whenever Lord of the Void deals combat damage to a player, you exile the top seven cards of that player’s library, then take a creature of your choice from among those seven, and put it directly into play.

Not only does this relatable ability permanently thin your opponent’s library via exile, it gives you access to more and more of your opponents strongest creatures before they’d even drawn them. 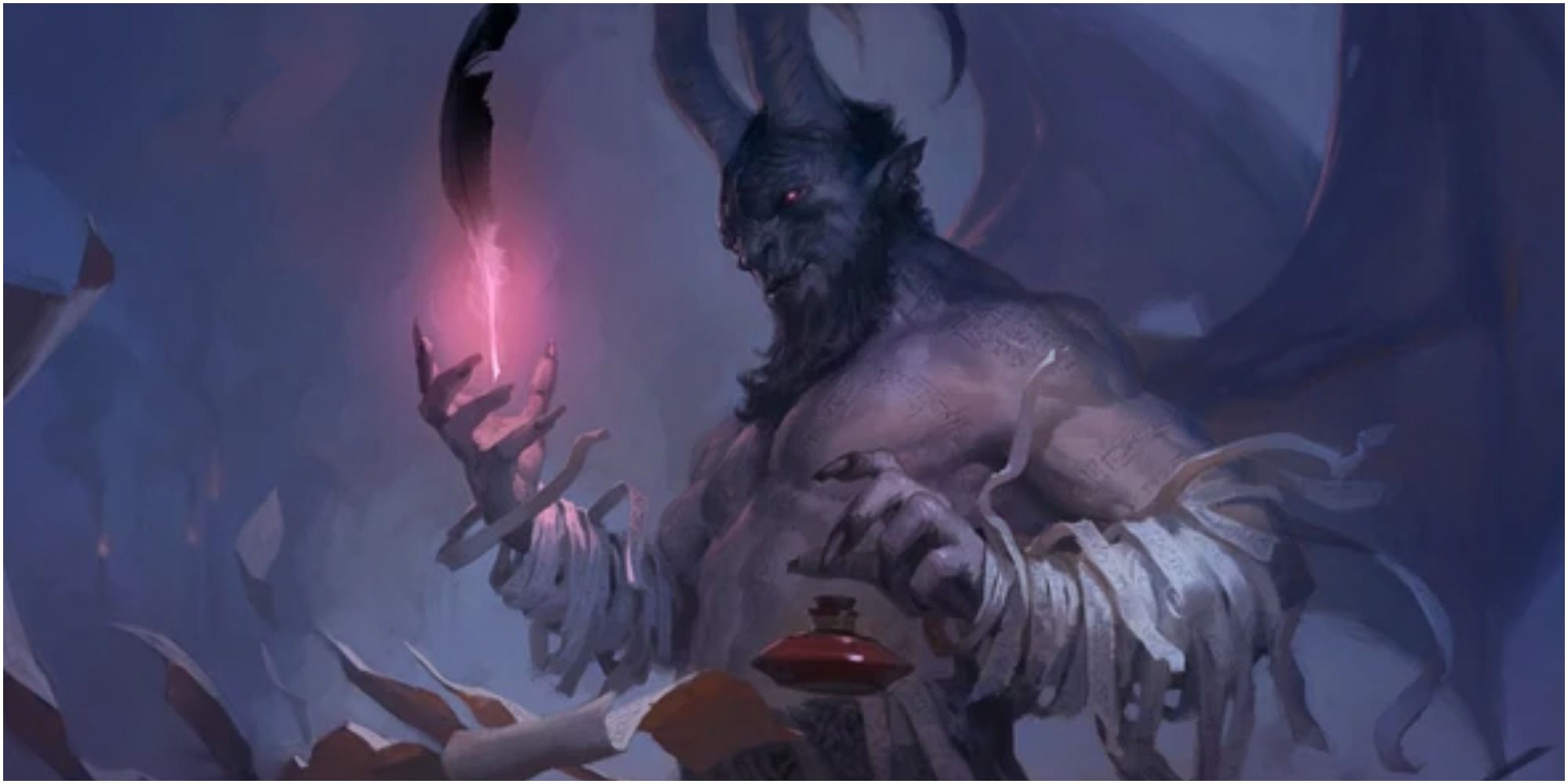 The most recently released entry on this list, Vilis, Broker of Blood possesses one of the most powerful card drawing effects that black has to offer. While controlling Vilis, whenever you you lose life, you draw that many cards. As black is chock-full of effects that deal damage to their controller, Vilis draws insane amounts of cards for its controller over the course of the game, even disincentivizing opponents from attacking you. As if that weren’t enough, for the cost of one mana and two life, Vilis can give target creature -1/-1, an ability that synergizes perfectly with his other ability.

Just watch out for Underworld Dreams, as that card goes infinite with Vilis, causing Vilis’s controller to draw cards and lose life infinitely. 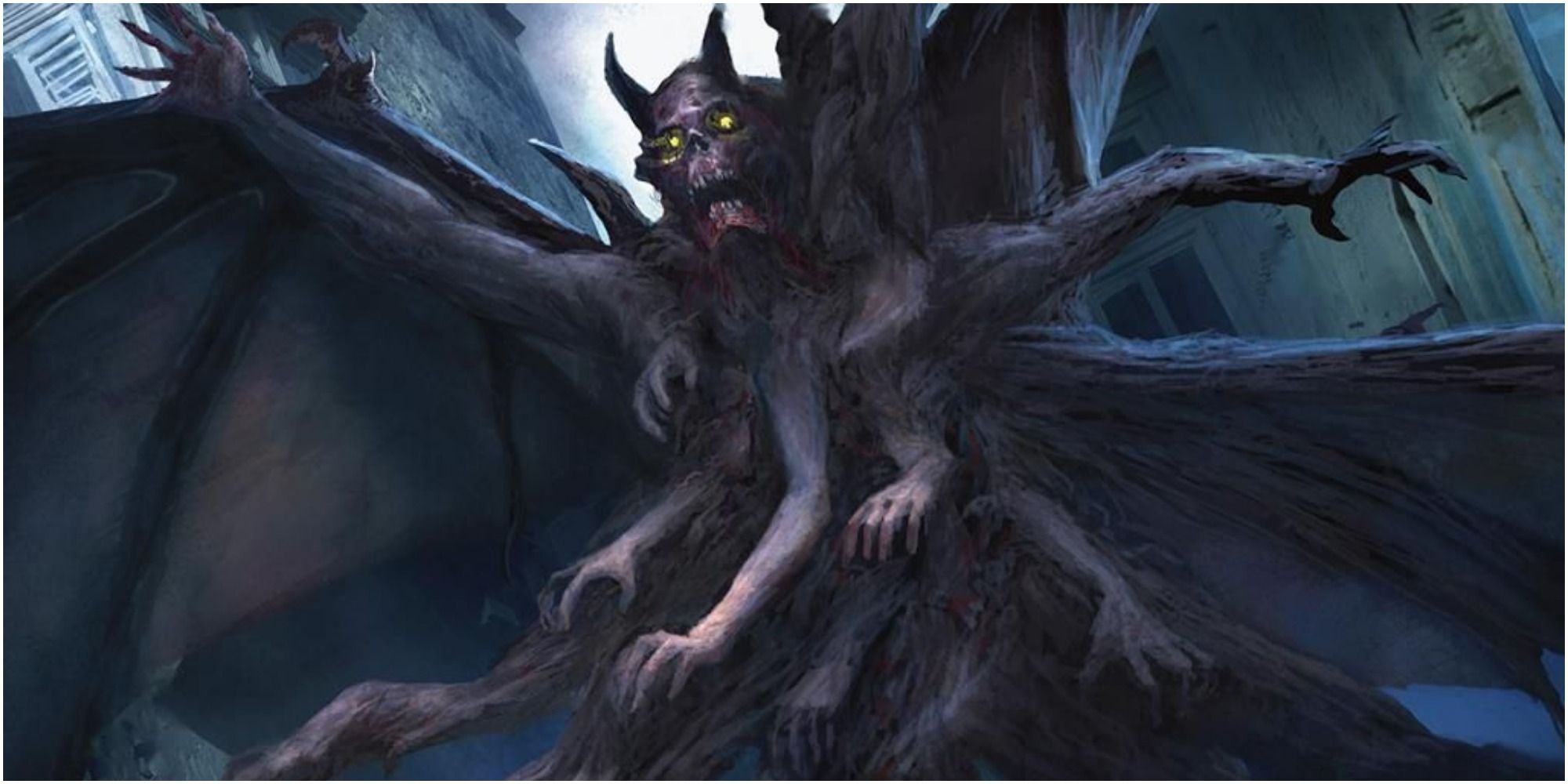 Like the previously mentioned Spawn of Mayhem, Doom Whisperer is a demon that’s jam packed with value. A 6/6 with flying and trample for five mana, Doom Whisperer possesses yet another ability that really pushes it over the edge.

Without requiring any payment of mana and at the cost of two life, Doom Whisperer allows for its controller to Surveil 2, looking at the top two cards of their library, reorganizing them and putting cards they don’t want into the graveyard. As this is a repeatable ability that doesn’t require Doom Whisperer to tap, in formats like Commander in which players have larger life totals, this effect is absolutely terrifying. On top of it’s large body and low costs, Doom Whisperer’s spot on this list is more than deserved. 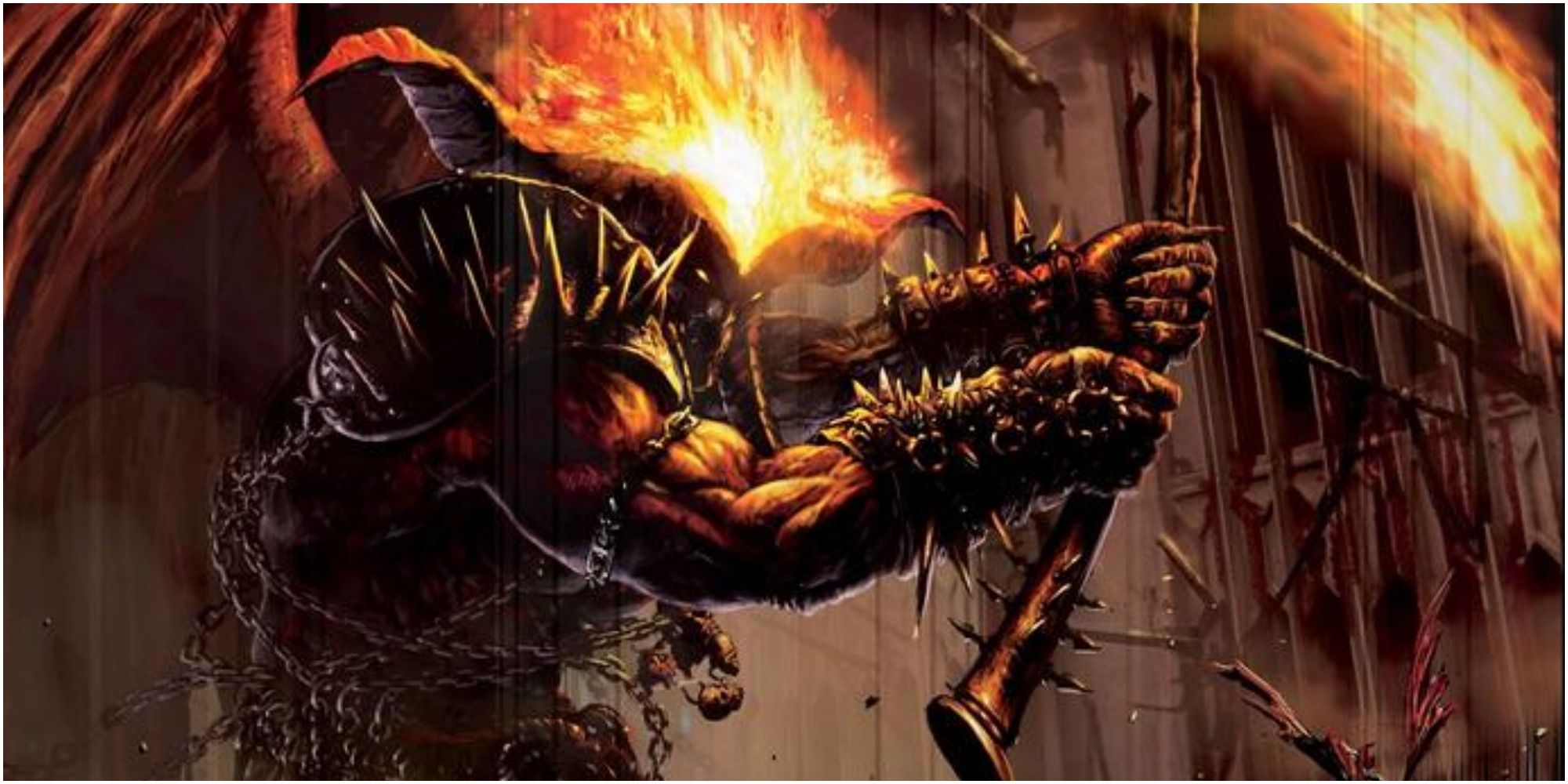 The second iteration of the namesake demon of the Rakdos cults, it isn’t hard to see how a demon this mighty would influence many of Ravnica’s inhabitants. A 6/6 for four mana, Rakdos exemplifies everything that Black/Red decks want to do: deal damage.

Only castable if an opponent had lost life that turn, Rakdos incentivizes dealing as much damage as possible, reducing the costs of all creatures spells by an amount of many equal to the amount of life lost by your opponents that turn. This ability can get out of hand quite quickly, as upon dealing enough damage, even Eldrazi Titans can be cast for trivial amounts of mana. 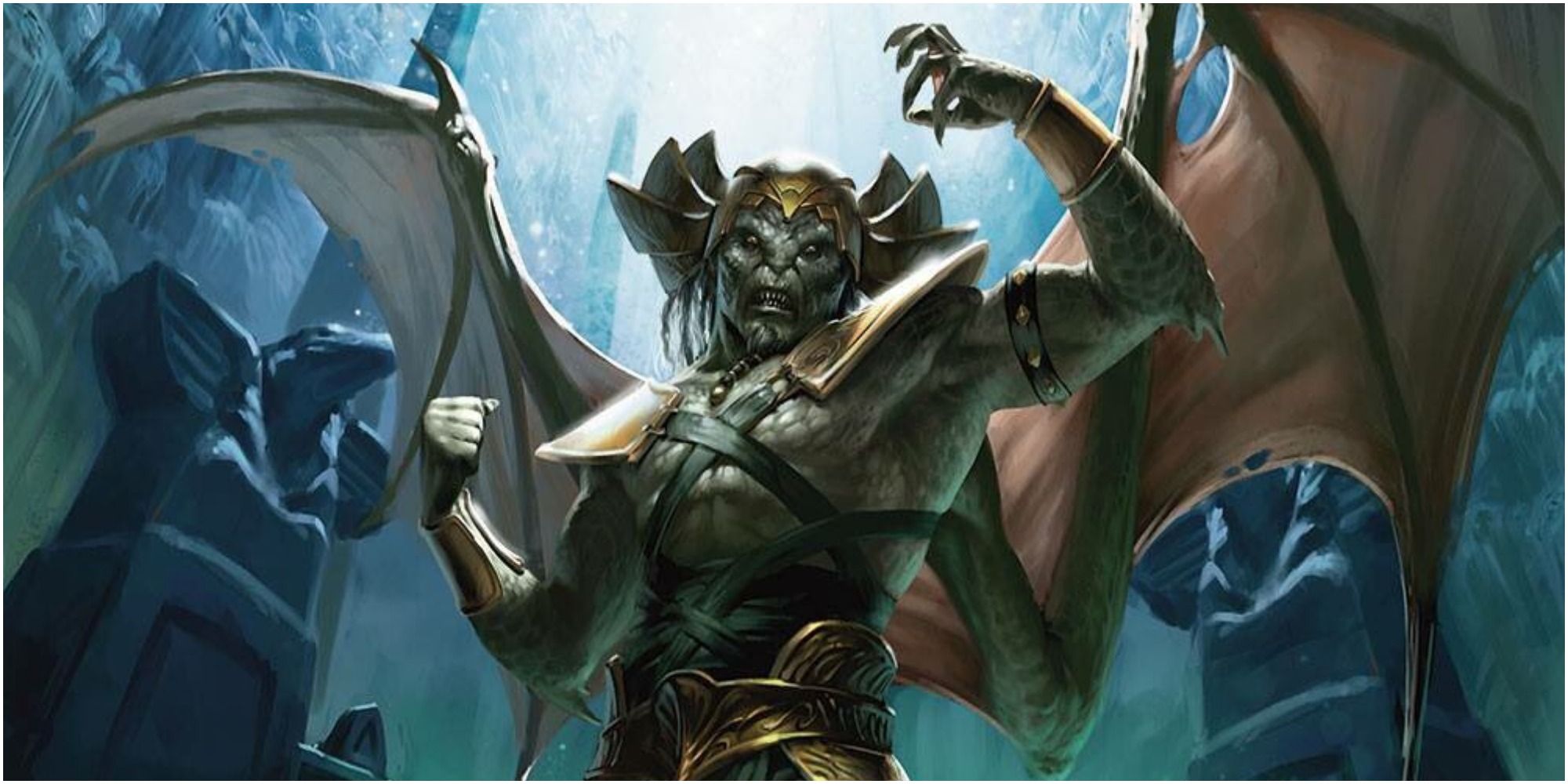 For an eight-mana legendary demon, Razaketh, the Foulblooded encapsulates black’s color identity in magic the gathering. Many players describe black as the color of “power at any cost,” and with Razaketh, this couldn’t be more true.

At the cost of a sacrificed creature and two life, Razaketh can search your library for any card and put it into your hand. This allows for Razaketh to allow its controller to always be flexible and have access to the cards they need at a moment’s notice as long as they have life and creatures to spare. 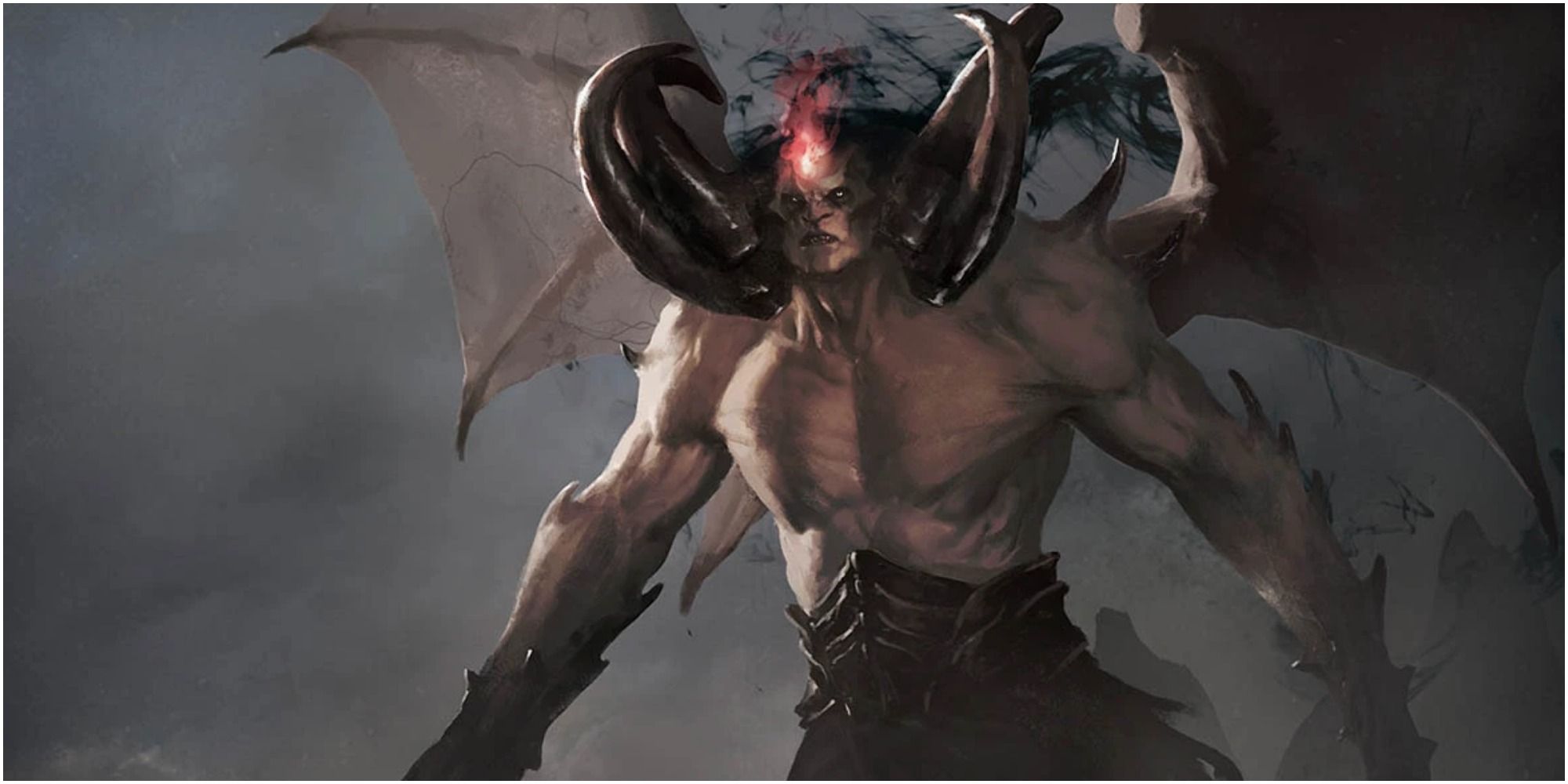 It truly says something about the power of a Magic card when it gets banned in the Commander format. Griselbrand remains the only demon to be banned in Commander, and for good reason.

It’s been stated that the player who draws and plays the most cards over the course of a game of Magic will often come out victorious. Bearing this in mind, Griselbrand possesses the ability to, at the cost of seven life, draw its controller seven cards. One would be hard pressed to find a card that can draw as many cards as Griselbrand at instant speed, let alone within a repeatable effect. As if this weren’t enough, Griselbrand is a 7/7 with lifelink, meaning he can gain its controller back the life they’d paid to activate his ability, allowing them to safely draw another seven cards.