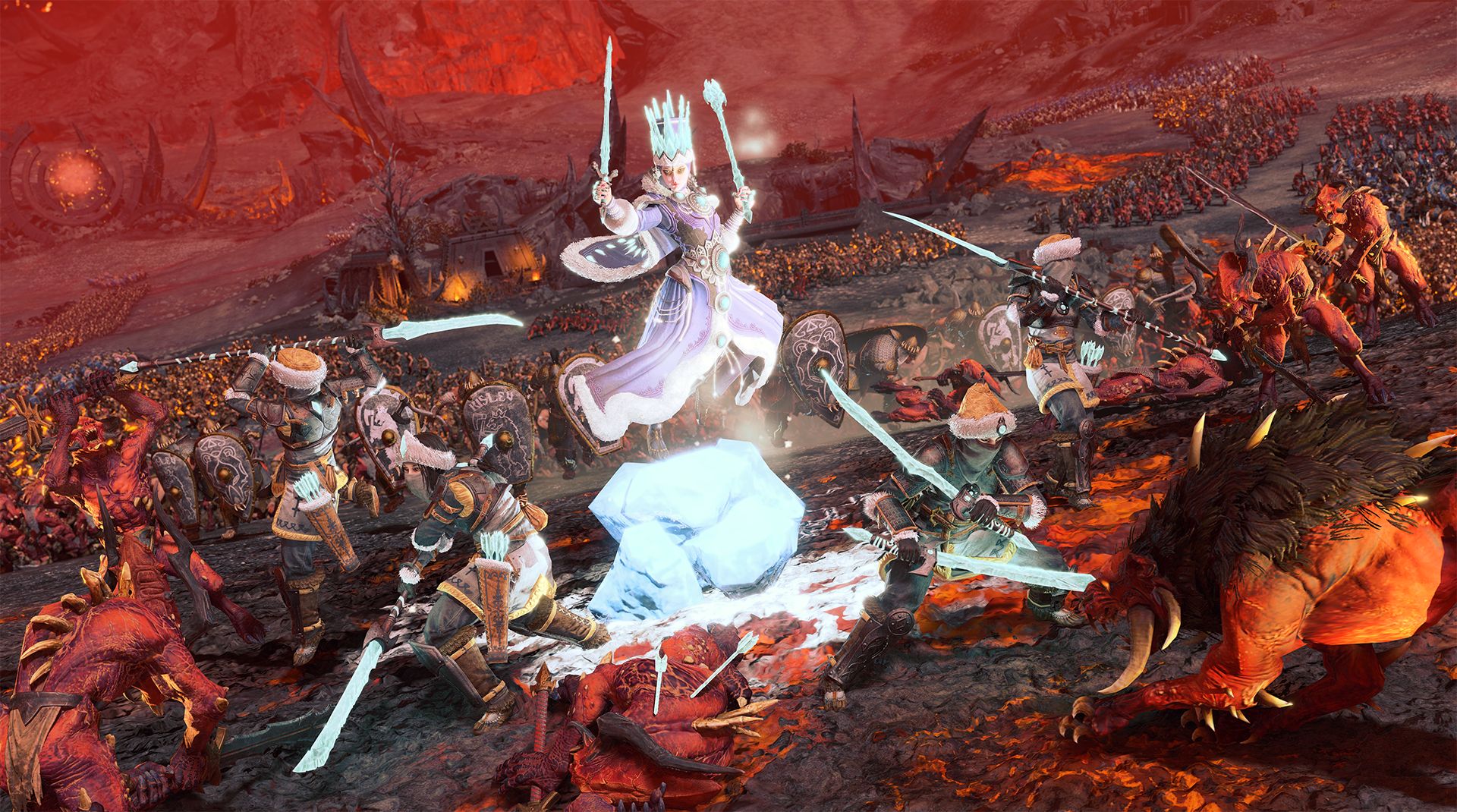 The Warhammer Total War trilogy is finally nearing completion, as Creative Assembly unveil their most ambitious game so far.

The Total War franchise celebrated its 20th anniversary last year and for almost all that time it’s been dedicated to recreating historical cultures and battles. From ancient Rome to feudal Japan, the series prides itself on its authenticity just as much as it does its epic scale battles and complex strategy. The decision to make games based on the Warhammer fantasy universe doesn’t change that fact though, as while it may not be based on real history it is extremely authentic to the mythology created by Games Workshop.

Total War: Warhammer 3 is due for release at the end of this year and for developers Creative Assembly this is the final instalment in a journey that started five years ago. Total War: Warhammer, Total War: Warhammer 2, and countless DLC packs and updates have led to this point, with each new addition adding to the size and detail of the game world, to create an increasingly gigantic map filled with radically different factions.

We recently got to play a preview of the game, with the chance to try out one of the new armies and take on a Chaos God in their own realm. Warhammer 3 is attempting to end the trilogy with a bang and already this seems destined to be one of the best PC games of the year.

Creative Assembly is also looking to ride a recent boom in physical Warhammer sales, that peaked over lockdown when collectors finally found themselves with time to paint their armies. Building upon the success of Total War: Warhammer and its 2017 sequel, Creative Assembly is finally ready to introduce the impressively repugnant Chaos Gods and the chilly Kislevites – as seen in the reveal trailer.

The Kislevites have a distinctly Russian aesthetic, with the country of Kislev bordering the mortal lands to the north, where it is the frontline against the hordes of Chaos. That makes its troops tough as nails and in the preview we played Ice Witch Tsarina Katarin Bokha leads an army against a horde of Khornate daemons; in other words fire magic versus ice magic.

Katarin is one of the most powerful Legendary Lords, using ice and cold magic for crowd control and area of effect damage. Her secret weapon is a spell called Heart of Winter, which casts massive damage and debuffs enemy units at the same time. She also has the ability to call forth an elemental bear to wreak havoc, which is as visually spectacular as it is fun to summon. It also hopefully means that Warhammer will release a suitability oversized miniature of this magical construct.

The four Gods of Chaos will each get their own faction. Total Chaos jokes aside, these are complex entities whose lore will dictate strategy and unit mechanics, putting Creative Assembly’s balancing skills to the test.

‘Each of the Chaos Gods has got their own individual lore; one turn you might be fighting Slaanesh, with the fast units and the magical lore supports that, then the next turn you might be up against Nurgle – where it’s a totally different proposition as he’s quite slow but durable and he does a lot of stuff around plagues and so on’, explained lead battle designer Jim Whitston.

‘It’s about constantly refreshing the player’s palette as they go through that campaign, the challenges they come up against both in the campaign and in the battle as well.’

Warhammer 3 is also adding the Cathay, an army inspired by Imperial China and Japan. Only a handful of miniatures were produced for this army, most notably the Nippon rocket team and ninjas, and now the faction is being introduced in the video game as a playable faction – although nothing has been seen of them or their units yet.

‘Cathay provides us with a unique opportunity as game developers, that we simply couldn’t overlook its inclusion within the final game. Games Workshop created some fantastic new material, all new units, spell lore, and so on. We’re really excited about sharing that stuff more fully in the months to come but they are absolutely there on their own merit geographically, that’s a whole new area to go into and there’s some really exciting stuff over there we’re looking forward to sharing’, said Whitston. 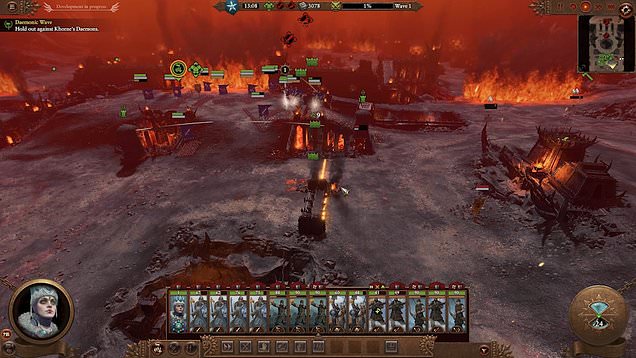 During the hour long preview we played as Kislev, in a new type of battle that is triggered dynamically as you reach the heart of each Chaos Realm. Called survival battles, our preview example was set within the fire and brimstone of the Brass Citadel, which overlooks the ageless desolation of Chaos God Khorne’s realm.

This new style of battle is longer and more challenging than normal ones and suits the epic nature of the new campaign, with waves of brutal Chaos monsters to defend against. The survival battles are also reminiscent of Warhammer 40,000 video game Dawn Of War, with the fast-paced capture the flag style action as you try and hold three separate control points.

We carved our way across the map with our units of sturdy Tzar Guards, who can dole out useful leadership buffs; and Winged Lancers, who are shock cavalry that cause fear and are perfect for flanking charges. There’s also the rifle-toting Streltsi, whose guns become axes when they get close enough to melee and who are one of a number of hybrid units available to Kislev.

The Chaos army was fielding units such as Chaos Warriors, Warhounds, and Bloodletters, who were constantly threatening our flank as we advanced. Dispatching hovering Bloodthirster and Skullcannon artillery as soon as possible is vitally important, as otherwise they will chip away at your units.

Advancing across the map you earn supplies which you can use to build towers and barricades, from which you can recruit new warriors and refresh and upgrade your troops. Your constructions are constantly under threat though, from the increasingly strong waves of daemons that you’ll need to defeat until you’re confronted by a champion such as the Exalted Bloodthirster of Khorne.

‘Given players will be invading the Realms of Chaos as part of the campaign narrative, we didn’t feel that one of our existing open field battles would quite do justice to the scale of that challenge. We wanted something that would give us a bit more freedom, as developers, to really throw the kitchen sink at players in terms of the challenge that they’re up against, the numbers of enemies and so on, and also to add variety to the overall play experience’, says Whitston.

This may all sound overwhelming but post launch DLC will add even more content, with factions like the Ogre Kingdoms, Chaos Dwarfs, and the Nagash, as well as a new multiplayer mode called Domination. With all these factions coming through thick and fast many players will have concerns about balance, which usually needs constant updating and patches, but in our preview the magic and combat balance felt right without being too complicated – and actually fairly accessible for new players.

Total War: Warhammer 3 is currently set to release in late 2021, although there’s no specific date yet. That’s just the start though, with a massive update coming post-launch it will be 2022 before we see the final form of this Gargant of a strategy game.

‘I think what I could say is that this is the final in a series of games, a trilogy, and this one is bigger, badder, better than the rest. We’ve had time to look over Warhammer 1, 2 and the DLCs. We’ve taken fan feedback and we’ve really improved on this game in terms of functionality and usability’, says designer James Martin.

‘So whether you’re a new or existing player, you’ll be able to get stuck in and work your way through the campaign, through the battles, with a load of new improvements and tweaks just to make that gameplay feel much, much slicker; much better.

‘We’ve got multiplayer, we’ve got campaign custom battle we’ve got something that will suit everyone. Anyone can get into this game and will have a blast.’