Vengeful Guardian: Moonrider Review – 16-Bit Action-Platforming Is Back With A Vengeance

The 2D action platformer was the king of the 16-bit era. Once the 32-bit consoles launched, developers seemed to fall out of love with the action-packed two-dimensional games of yore. With the rise of the indies over the last half-decade, the genre is once again in excellent shape, but there is something special about the 16-bit action-platformer that still feels particularly sharp, even if the pixels of our CRTs were always a touch blurry. Plenty of excellent modern indies have used this era as inspiration (as they should), but the anachronisms are glaring; they represent a hazy memory of what people thought that game era provided, but when compared to the genuine article, the artifice is laid bare. That’s simply not the case with Vengeful Guardian: Moonrider. Authenticity is its middle name! Okay, “Guardian” is its middle name, but you get what I’m saying here.

Vengeful Guardian: Moonrider is a pitch-perfect recreation of a Super Nintendo action-platformer. It fills that nook of being difficult while avoiding that Nintendo-era level of brutality. It features branching paths, screen-filling bosses, hidden power-ups, and, of course, excellent sprite work. And I mention the Super Nintendo specifically, as the Mode-7 style speeder bike sections clearly show that Vengeful Guardian is very specifically emulating Nintendo’s 16-Bit entrant. It even comes packing a kickass scanline filter. It isn’t afraid to lean into nostalgia, but thankfully the visceral sword-slashing and dive-kicking of Vengeful Guardian do not require its players to come wearing rose-tinted glasses.

Like the best action titles of that bygone era, the gameplay here walks the line between being nuanced enough to be masterable, while simultaneously being intuitive enough that nearly every player will have a basic grasp on the combat within minutes of booting the game. Sure, you’ll have the wobbly legs of a baby giraffe during your first few attempts at stringing dive kicks together, but you will quickly grasp the concept. Outside of a handful of scenarios, the run-of-the-mill enemies don’t tend to be too difficult to overcome, and the stages, while varied and filled with unique quirks, aren’t typically that tough. On the other hand, a number of the bosses will test your mastery of the game’s assortment of sword-based attacks. 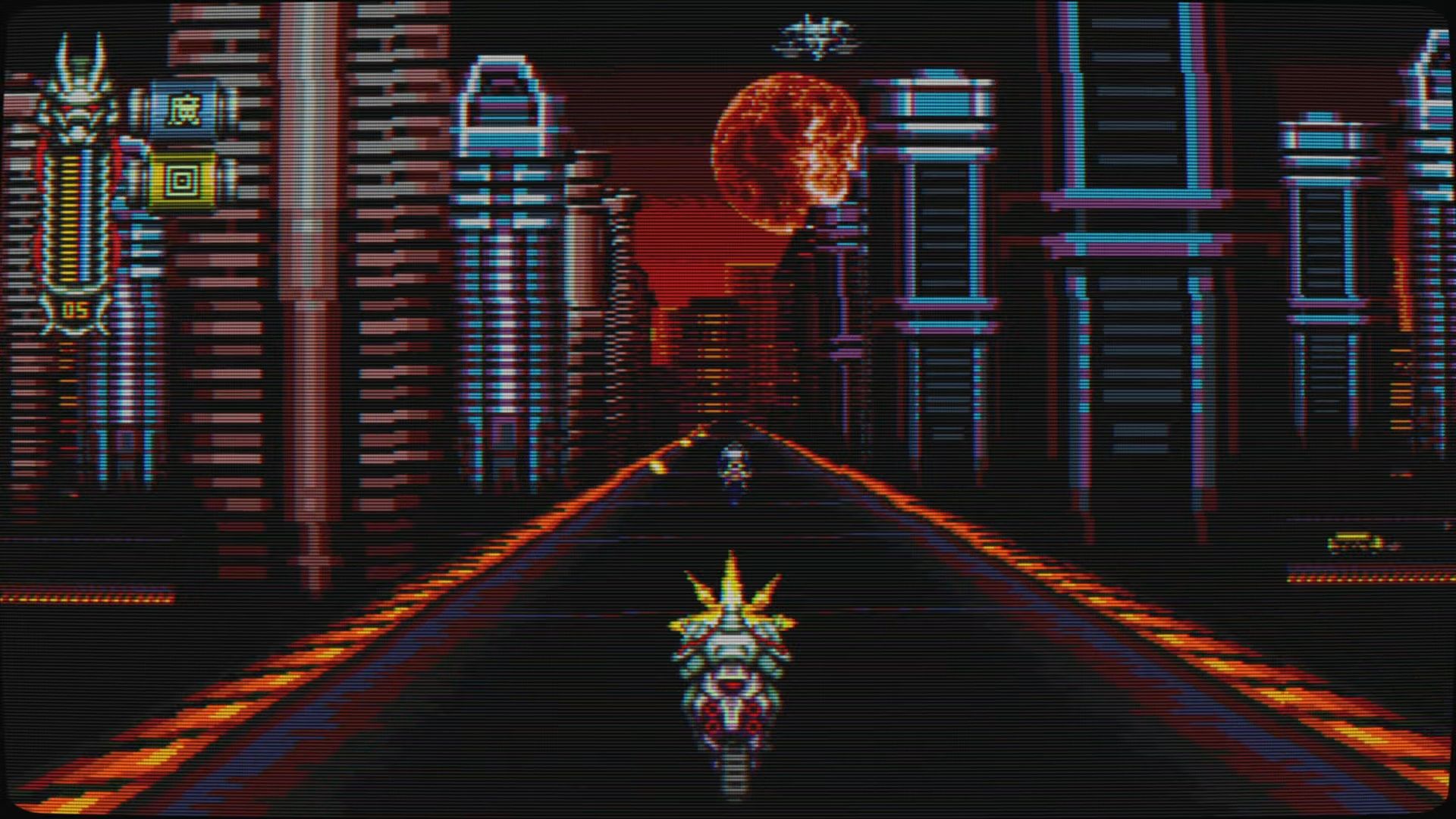 But worry not, if a boss is too much for you, the Mega Man-esque system of selecting the order in which you want to approach each stage allows you to retry a level. So after you’ve picked up one of the many unlockable special attacks, it may just give you the edge you need to return to a specific stage and kick its butt. During those tougher encounters, I preferred to keep running headfirst into that wall, but I was born stupid like that. The game provides a sensible path to work around its more difficult obstacles for the less hard-headed.

That isn’t to say that you will be frequently running up against seemingly insurmountable challenges. If you are looking for a more sadistic level of difficulty, Vengeful Guardian isn’t your best option. During my playthrough, I only encountered a handful of bosses that pushed me to my limit. This is not an unofficial sequel to Hagane. That being said, Vengeful Guardian does meet masochists halfway. There is a ‘power-up’ that you are given early in the game that exists solely to make you more vulnerable, turning the game into a white-knuckle experience. So if your pleasure is pain, the game has provided you with a way to lean into those inclinations. 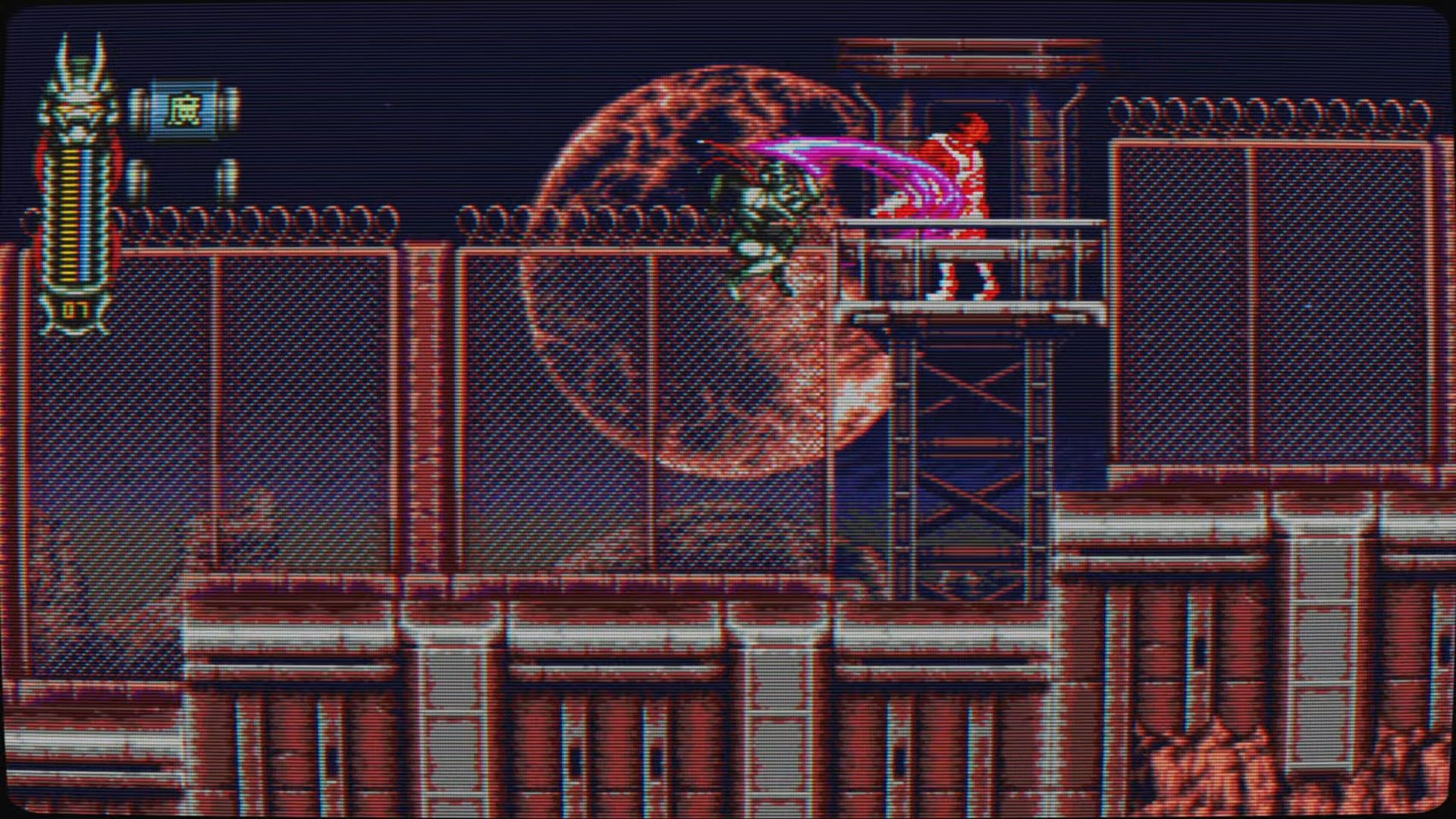 It isn’t just Vengeful Guardian’s gameplay and graphics that capture the magic of the 16-bit era. It sounds the part too. The synthy, sample-heavy soundtrack could have been featured in a grittier F-Zero spinoff. It isn’t just about that feeling of authenticity, either. The OST is one catchy chip-tune bop after another. The rest of the sound design is on point as well; there are a few pieces of voiced dialogue, all of which are heavily compressed and sound delightfully crunchy. The attention to detail here is incredibly endearing.

However, while Moonrider excels at delivering those SNES-era thrills, it also ends up holding onto a little of its baggage as well. For starters, it is far from being a lengthy experience. While the level-grading system (based on completion time) gives it some replay value, you can see the end credits a few hours after pressing start on the opening screen. Moreover, the script here is pretty rough at times. The dialogue can be awkward, and there are minor grammatical errors spread throughout. Thankfully Moonrider’s developers were smart enough to know that people don’t play these games for their riveting writing. All the dialogue exchanges are saved for boss encounters and are relatively brief. In a way, their awkwardness almost lends the title a further degree of authenticity, though I expect these issues stem from Vengeful Guardian being developed by a small, plucky indie studio, and not from a commitment to recreate the 16-bit era’s often spotty localizations. 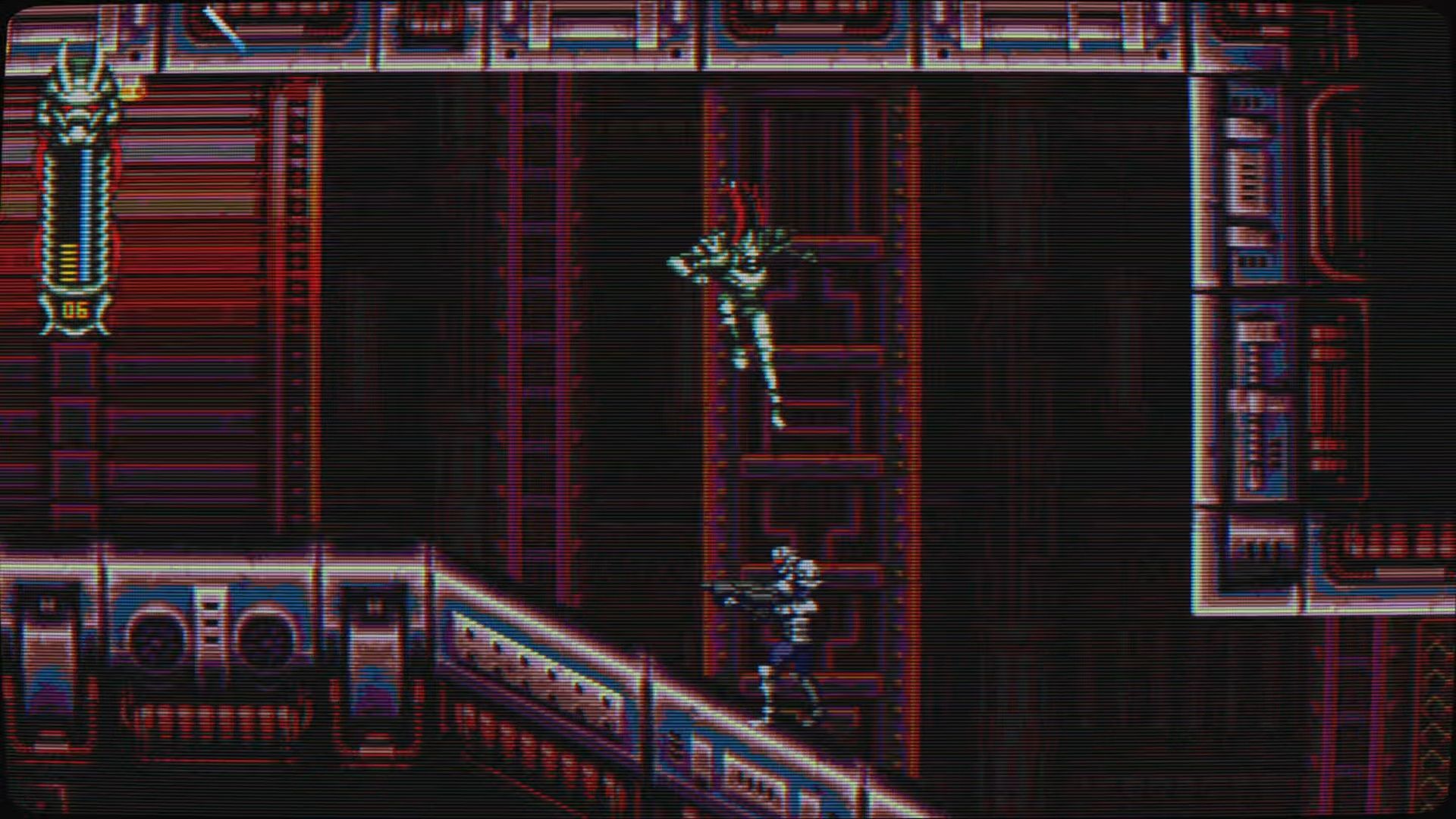 If it sounds like the criticisms here are on the pedantic side, that is because Vengeful Guardian: Moonrider’s downsides are largely negligible. This is a pristinely crafted action-platformer that has a strong understanding of what it means to deliver an engaging, frenetic, action-packed experience. If Moonrider had been released on the SNES, it would be one of those legendary 16-bit-era action titles that are frequently referenced in reverent tones. Its influences aren’t hard to see, and it certainly doesn’t do anything to reimagine what a great 2D action title is, but it does everything so extraordinarily well that it never feels redundant. Vengeful Guardian: Moonrider stands shoulder to shoulder with the greats, and all fans of pristinely crafted action games owe it to themselves to give it their attention.