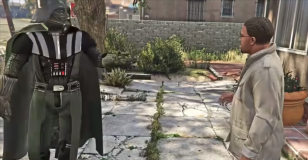 When he isn’t enforcing Emperor Palpatine’s stranglehold over the galaxy, Darth Vader makes time for the homies. But being a Dark Lord of the Sith, Vader can’t stop himself from dunking on his boy Franklin. Or at least that’s what a new fan edit would have us believe.

A rising trend of GTA 5 fan videos features a recreation of a famous scene. In the original, protagonist Franklin comes home with his friend Lamar beside him. Lamar wants to hang out, but Franklin sends him away. Lamar responds by taking shots at Franklin’s “yee yee ass haircut” as he leaves. By modding in a Darth Vader skin for Lamar, Youtuber WackyW3irdo imagines a different scenario.

WackyW3irdo actually has a whole series of these, featuring the likes of Robocop and Kermit the Frog. They’re all hilarious, but Vader’s stands out for its unique dialogue. Most of these edits just reuse Lamar’s lines with a voice filter. The Vader version goes the extra mile with describing how he “joined the darkside, smacked some backsides.” It’s a side of Anakin we don’t typically see.

Meanwhile, in official GTA news, a new rumor suggests Rockstar cancelled Bully 2 in favor of GTA 6. Vader will be chillin’ for a while, though, as Star Wars gaming seems to be focused on Squadrons and Mandalorian.