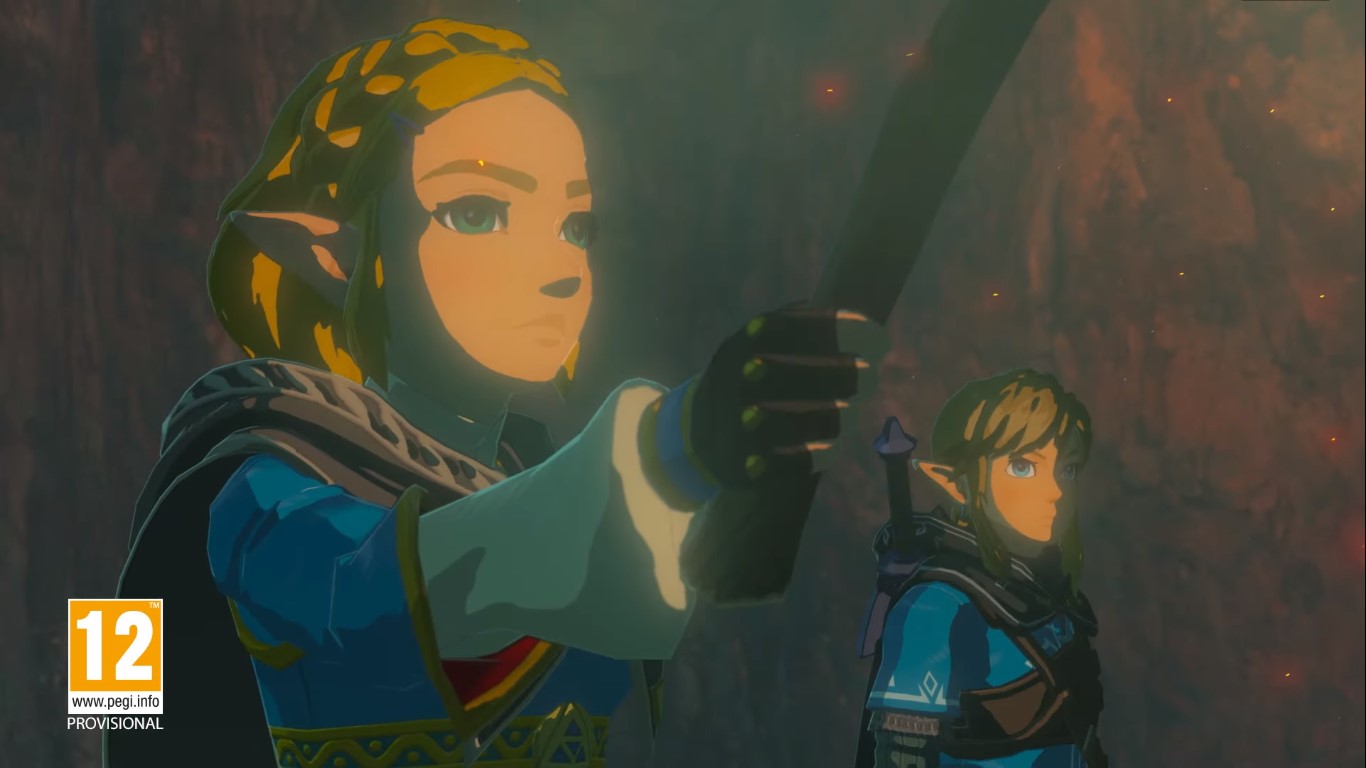 Readers reveal the games and announcements they’re most looking forward to from E3 2021, including Starfield and Elden Ring.

By this time next week E3 2021 will have begun and while it’s online only it should still be the biggest preview event of the year. The pandemic has made it difficult to predict what might be revealed by the various publishers but we wanted to know what you were looking forward to the most.

As you’d imagine, the Switch Pro, Zelda: Breath Of The Wild 2, and Elden Ring were the most popular choices but there was also lots of interest in seeing Microsoft cut lose, no matter what they might actually show.

Dwindling hope
The thing I’m most hoping for from E3 is the announcement of the Switch Pro and its games. At the beginning of this week I thought that was basically guaranteed but as of Friday morning there’s no sign of the rumoured early reveal and I’m suddenly less certain. I don’t doubt the console is real, but Nintendo are so weird I can completely see them cancelling the reveal purely because of the leaks.

I could even see them delaying it till next year, although primarily because they won’t have enough. I really don’t think Nintendo like to be second guessed and I wonder if all these leakers would think themselves so clever if it turned out they were partly responsible for the no show.

Of course I don’t know, nobody knows, but that is part of the magic of Nintendo. At the very least I hope to see Zelda: Breath Of The Wild 2, Bayonetta 3, and the rumoured Donkey Kong game. I wouldn’t say I expected to see any of them though. I certainly wouldn’t put money on any of them. I suspect the closest to a certain is a new Smash Bros. fighter, possibly both of the last two, that turns out to be a surprising third party (yes, I’m still holding out for Master Chief).
Gilgamesh

Top gear
The thing I’m most hoping for from E3 is just that Microsoft get themselves into gear. I don’t really care what they show, although I’m hoping for Fable, just as long as it looks good and takes some kind of advantage of the Xbox Series X. It’s been out for six months and not only has there not been a single first party game but we haven’t even had so much as tech demo to show good its graphics are. I find that incomprehensible, especially given how terrible Halo Infinite looked the first time they tried to show it (who gave the thumbs up to that livestream?!).

You might now be wondering why I bought the console in the first place. Well, other than I didn’t think it would be this long without a game, I just find Game Pass to be much better value as a way of buying games. Especially given how much PlayStation 5 games cost.

In the end I expect this to be a small blip in the console’s overall life. You could even argue that it’s better to have no games than the poor quality ones you usually get at the start of a console generation. Still, it’s a bit nerve wracking to be waiting, hoping that Microsoft know what they’re doing and can finally put on a good show.
Benshie

Rabid for more
I’m really hoping for a new Mario + Rabbids game. The first game was my first experience of a XCOM style game and ever since I’ve been hooked on the genre (although the supposed king of the genre XCOM 2 I didn’t like, as I found it too difficult even on easy) and it was my favourite until Gears Tactics.

I’d love a sequel or a similar Nintendo themed spin-off, a friend of mine joked Zelda vs. Rabbids which is now something I really wish could happen one day. I’ll be keeping my eyes peeled at Ubisoft’s conference, that’s for sure.
Angry_Kurt (Twitter)
Now playing: Shadow Of The Tomb Raider (Xbox Series X) and Pokémon Sun (3DS)

Insufficient data
I really like the sound of both that XCOM x Marvel game leak, actually, and the open world Cthulhu game, even if they might not actually be at E3. But previous to that what I was most looking forward to was Starfield. Still is really, even though we don’t really know what it is.

I’m not sure this level of secrecy is a good idea though because by this point everyone has their own idea of what it is and if it doesn’t at least broadly match that then a lot of people are going to be upset. Kind of like the Star Wars sequels.

I’m assuming it’s like a cross between a non-boring Elite and Fallout (or I suppose The Outer Worlds), which sounds great, but if it’s something less interesting than that… all I can say is it better have a good trailer.
Pinky

Drifting apart
My biggest hope for E3 is that Sony is there, but I have no idea if that will happen. They’ve been making announcements this week so I’m guessing they’re going to continue with that next week and into E3 as well? A blog here, a new video there. Not the most exciting way to do things but it’s something.

I’m not really sure why they’re doing it this way. They say they have dozens of games underway and they’ve never been shy about showing them early before so I can only assume they just want to be awkward and seen as apart from and above the rest of the games industry. Which does seem a very Sony attitude. But then why have the half-hearted announcements at the same time anyway?

The worst thing is everything they’re saying at the moment seems good to me. The continued commitment to single-player, the emphasis on new IP, and the fact that everything so far has been really good. I am disappointed with the continued support for cross-gen but I don’t think anyone can pretend Horizon Forbidden West didn’t look amazing.

I hope E3 is back to normal next year as I miss the spectacle of it and the fact that it pulls the whole industry together. This year it’s much too easy for them to all split up and do their own thing, which, if nothing, leads to some very confusing schedules.
Danshin

Hardware announcement
It will never happen, but I would love Nvidia to release a statement telling people that they can buy directly from the Nvidia store at RRP and you can get a new graphics card this year.

Probably save that for CES, eh?
bobwallett

Excessive reward
As GC has pointed out, hope and expectation are very different things, so I do try and keep them separate but it can be hard to keep your expectations under check at times, especially when you feel like some big news is well overdue.

My main E3 hope is we get previews or trailers, and release windows, for both Elden Ring and the sequel to Zelda: Breath Of The Wild (as well as a proper title for the latter).

With the scarcity of news on Elden Ring it’s been put on such a pedestal by FromSoft fans that it’s amusing seeing the hype spread across the rest of the industry, where people who have no interest in Soulsborne games seem at least vaguely aware of this mythical game that nobody knows anything about.

As far as I can tell, though, this effect has been unintended by the developer and publisher, and I can imagine so many other businesses frustrated at the simple concept of a competitor winning the marketing game by simply being admired for previous work. I’ve heard the rumblings about it not being at E3, though, so I’m steeling myself for that blow.

I think where my hopes and expectations overlap is with Zelda. I just can’t see Nintendo getting away with not showing or saying anything about Breath Of The Wild 2. A two-minute trailer and a first half of 2022 release window would be fine by me.

So much of the Nintendo conversation is being dominated by the Switch Pro but, other big unknown news notwithstanding, I just can’t see the finished article justifying all the excitement. If it really is intended to replace the original Switch it sounds even less essential than a PlayStation 4 Pro for those who already have a Switch. I do expect some games – maybe last gen third party ports – will only run on the Pro model but certainly nothing that would enrage 80+ million Switch owners, especially all those who bought one recently in good faith.

I have a PlayStation 5 and a Switch and while I’m relatively happy with the short-term pipeline for the PlayStation 5, I think all the most exciting stuff confirmed for Switch is still too far away, until I’m told otherwise. Nintendo might not be feeling the pressure to let on about what’s going on with so many of their first parties but it can get to a point where it just looks like they’re coasting along without a new killer app for years at a time and are being excessively rewarded for it.

Problem is, aside from the Zelda sequel, I kind of now expect their next biggest news to consist of exactly the sort of stuff the Switch is oversaturated with. Namely less ambitious (but no less expensive) 2D games the likes of which have been treading water and padding their schedules since the DS/Wii era. If 2021 looks like another 2D Donkey Kong, another 2D Metroid, more Pokémon remakes, lazy full price ports. and a pile of dry Japanese role-playing games, the one thing that would conveniently make up for all that is an imminent sequel to one of the best games ever.
Panda