Weight Loss: Surprise fitness phenomenon down to cheapest price yet 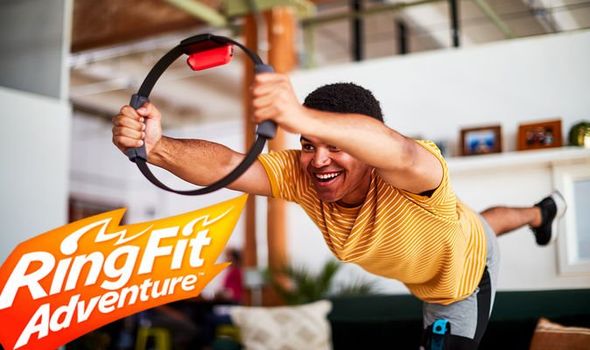 Surprise fitness phenomenon Ring Fit Adventure has been reduced to its lowest price.

Ring Fit Adventure – which was released back in 2019 – launched at a recommended retail price of £69.99.

While initial sales were steady, the health and fitness game grew in popularity when lockdown commenced in 2020.

Indeed, there was a time when global stock shortages made it nigh-on impossible to track down a copy.

Fortunately, Ring Fit Adventure is now back in stock, and at the low price of just £56.99 from Currys.

That’s cheaper than Amazon and Argos, where Ring Fit Adventure is available for £59.99.

The bundle contains the Ring Fit Adventure game, as well as a leg strap for tracking movement, and a special Ring-Con controller for resistance training.

And speaking of Ring Fit Adventure, Nintendo has dropped a big hint that a Switch expansion is in the works.

In a recent investors call, Nintendo president Shuntaro Furukawa seemed to shut down talk about a Ring Fit Adventure sequel.

He did, however, suggest that the company was looking into ways to keep users engaged with the existing game.

“Since Ring Fit Adventure was released in October 2019, strong demand has continued both in Japan and overseas,” he said.

“It sold 7.38 million units globally during the fiscal year ended March 2021, and cumulative sales have exceeded 10 million units. The title is popular also in the Asia region including Korea, Taiwan, and Hong Kong, even though Nintendo’s main business regions are Japan, the U.S and Europe.

“With regard to future developments, I cannot disclose specific plans, but we would like to take various initiatives so many people continue to play this title.”

Ring Fit Adventure is a fitness-themed, turn-based role-playing game featuring a body building dragon and a ton of monsters.

With the right Joy-Con housed in the new Ring-Con accessory and the left Joy-Con tucked into a Leg Strap, players explore 20 different worlds and battle various monsters using “Fit Skills”.

Split into arms, legs, abs and yoga stretches, “Fit Skills” are individual and unlockable exercises that serve as your special moves and attacks. So instead of casting a fire spell, for example, players might damage an enemy by performing a plank.

The Ring-Con is kind of like a versatile resistance band that can be used for various strength exercises, while the Leg Strap measures things like running speed, squat movements and knee raises.