World Of Warcraft: Dragonflight – How To Defeat Bakhushek In Pet Battles

With the pet battle system continuing into World of Warcraft: Dragonflight, there are plenty more pet trainers and pet bosses for you to take on across the Dragon Isles. You can either wait for their world quests to spawn to battle them for extra rewards, or you can simply do so on your own time (for practice, perhaps).

One of the pet trainers on the Dragon Isles is Bakhushek, a centaur of the Maruuk Centaur who resides in their central city, Maruukai. She stands beneath a tent with her two pets, Skritches and Phantus, awaiting challengers that usually only swing by for her Two and Two Together world quest. 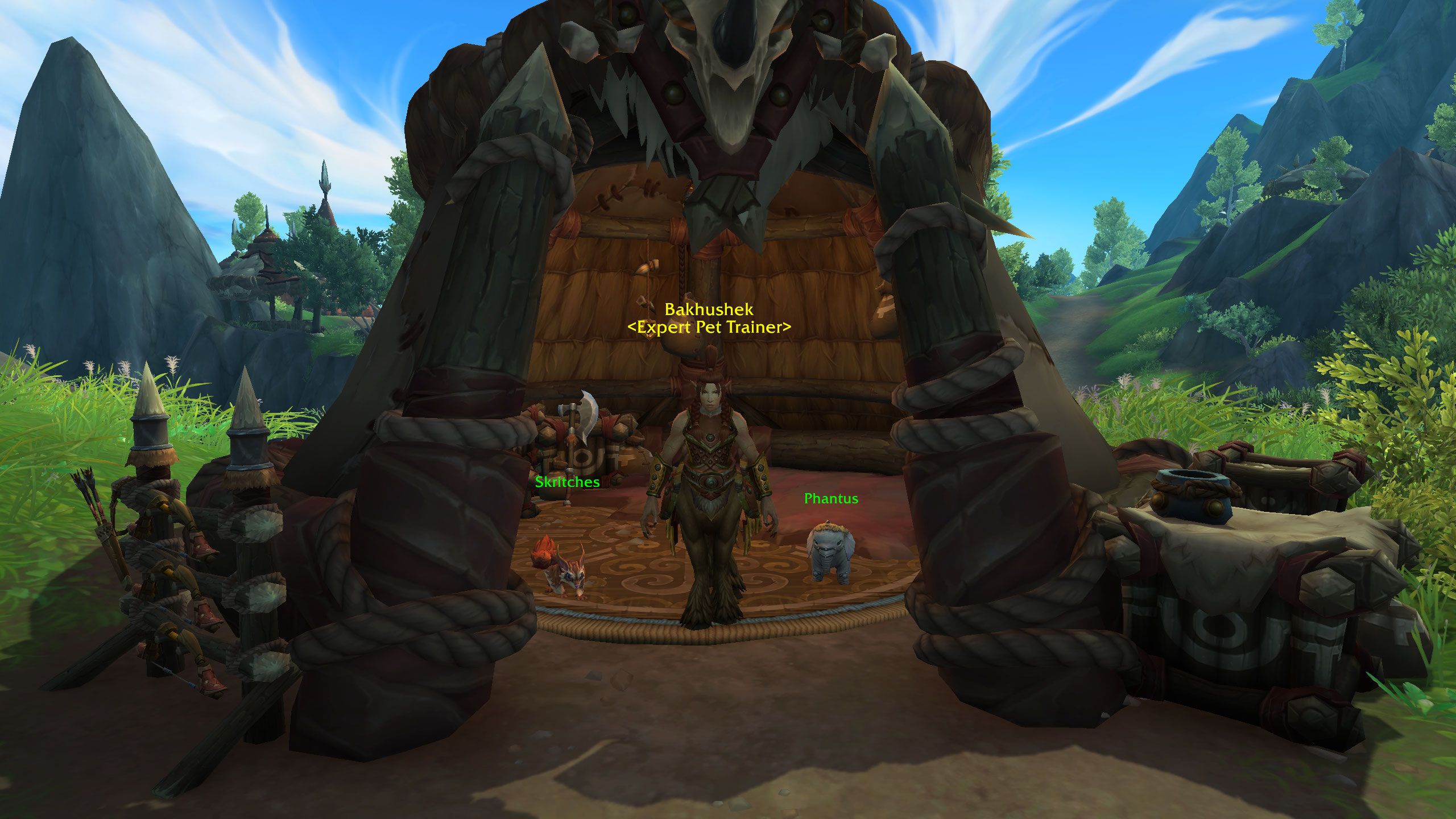 There’s nothing overly special about Bakhushek’s pet roster, just that it only consists of two pets (as opposed to the usual three), both of which are of epic quality:

Skritches will always be the first pet she sends into battle. 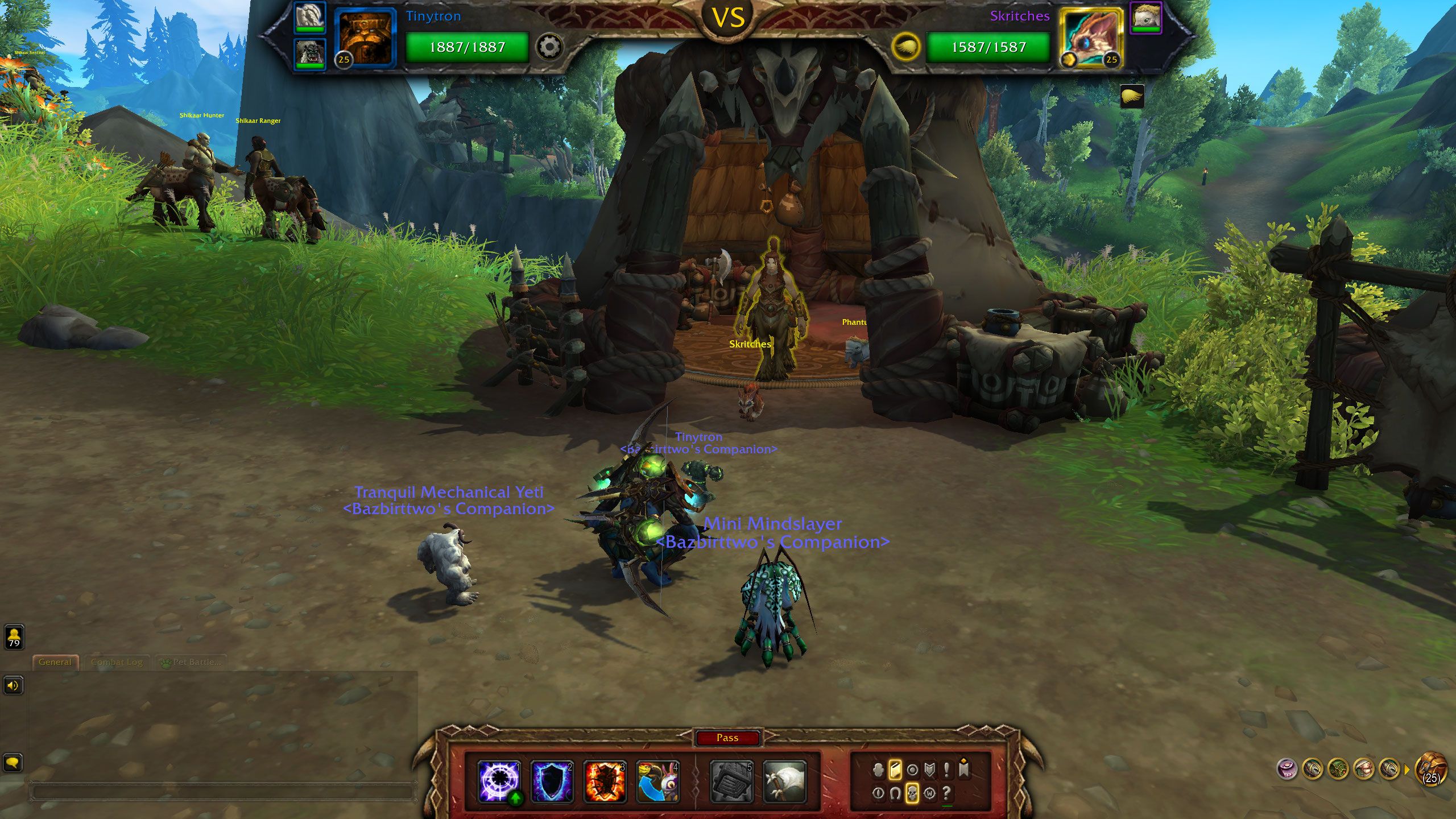 There are two strategies to defeat Bakhushek. The first is by using Tinytron as your first pet to defeat Skritches, then having two more pets that deal bonus damage to beast-type pets to deal with Phantus. Alternatively, you could start with a pet that deals bonus damage to flying-type pets to deal with Skritches first, then bring Tinytron in for Phantus after your first pet gets knocked out, though this option isn’t as efficient.

The reason Tinytron works so well here is that both Skritches and Phantus have a triple-attack ability (Hunting Party and Stampede, respectively), and Tinytron has two shields. In his second ability slot, you should take Lightning Shield, and in his third ability slot, you should take Fire Shield. Both of these shields deal 210 to Tinytron’s attacker every time they deal damage to him, so since both Skritches and Phantus have triple attacks, they end up killing themselves upon your Tinytron by turn three.

The second strategy is if you don’t have Tinytron. Take a roster of pets with a combination of bonus damage to flying and beast-type pets, though you may want to take two that deal bonus damage to flying pets (many magic and dragonkin-type pets will suffice) and only one that deals bonus damage to beast-type pets. The reason for this is that a mechanical-type pet with Supercharge and Wind-Up (i.e. Runeforged Servitor or Iron Starlette) can usually one-shot Phantus, but in reality, most mechanical pets can dispatch Phantus quite easily.

All pets for this regular strategy and all the pet type-specific strategies in the following sections require a full team of level 25 pets. 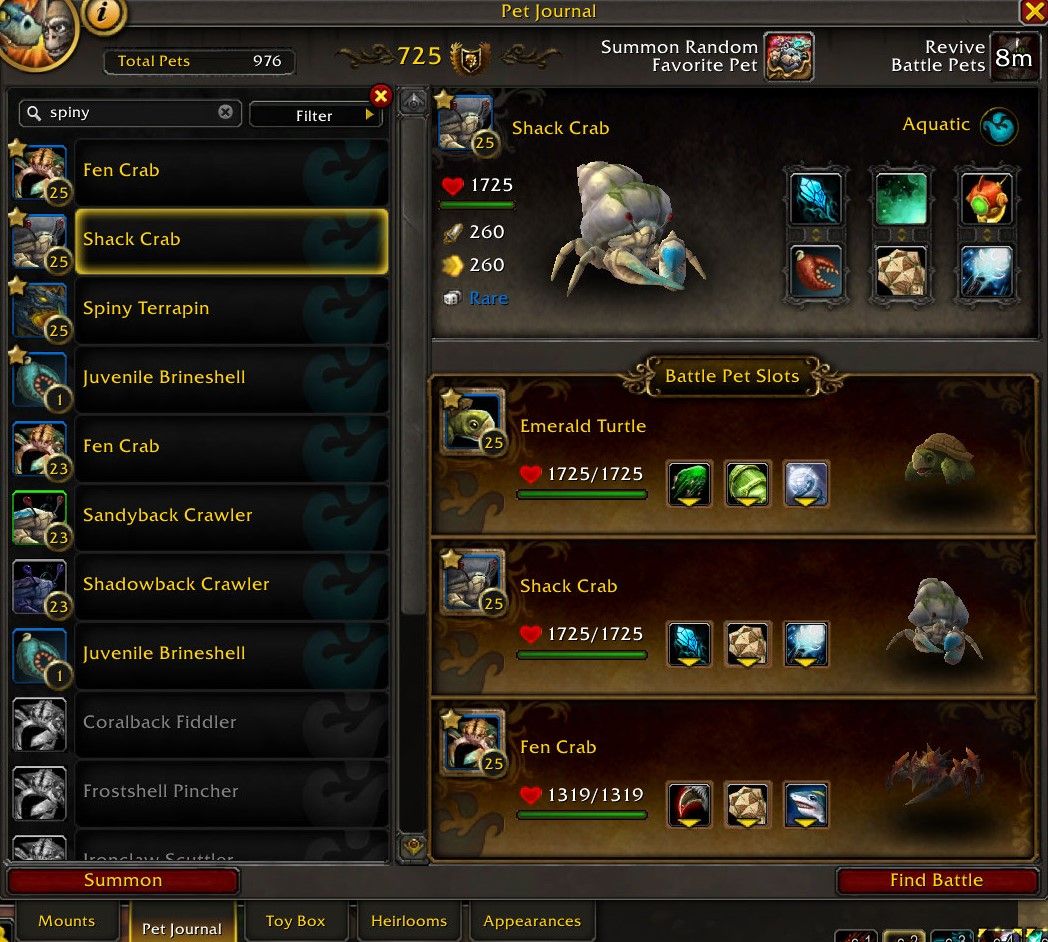 To earn the Battler of the Dragon Isles achievements, you also have to defeat Bakhushek with a full team of each type of pet, so the following sections, including this one, will address that. First up is the Aquatic team:

All you need to do is spam Emerald Bite to kill Skritches (since it does bonus damage to flying-type pets). To deal with Phantus, you can widdle him down with the Shack Crab’s Surge and Spiny Carapace (the latter works like Tinytron’s shield abilities), then clean him up with Fen Crab’s Rip/Blood in the Water combo. 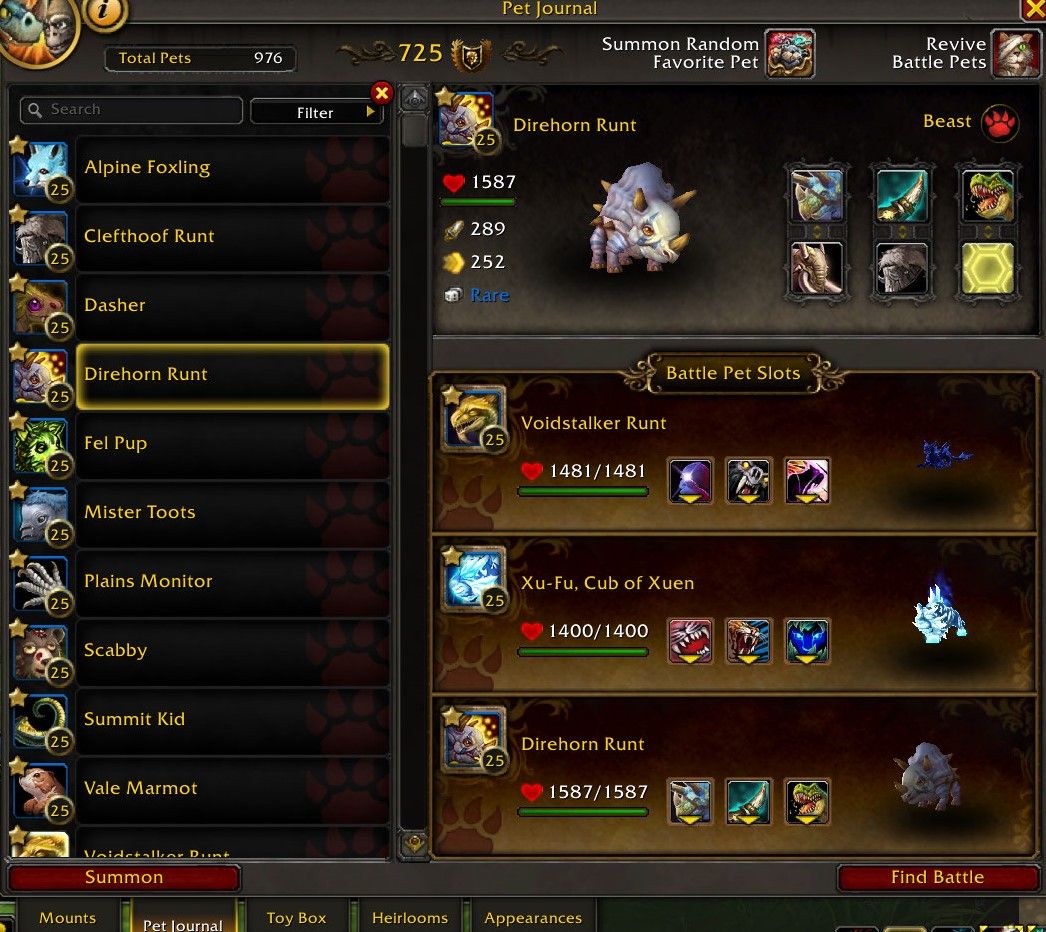 Next up is the beast-type team:

You’re going to want to spam Blink Strike with your Voidstalker Runt until it dies. You won’t kill Skritches this way, but you’ll get him to a low enough health that the next pet you swap in will take him out on its first turn. Then, Xu-Fu will be able to solo Phantus with his Prowl/Feed combo, but having your Direhorn Runt as your third pet is helpful in case Xu-Fu can’t pull it off. 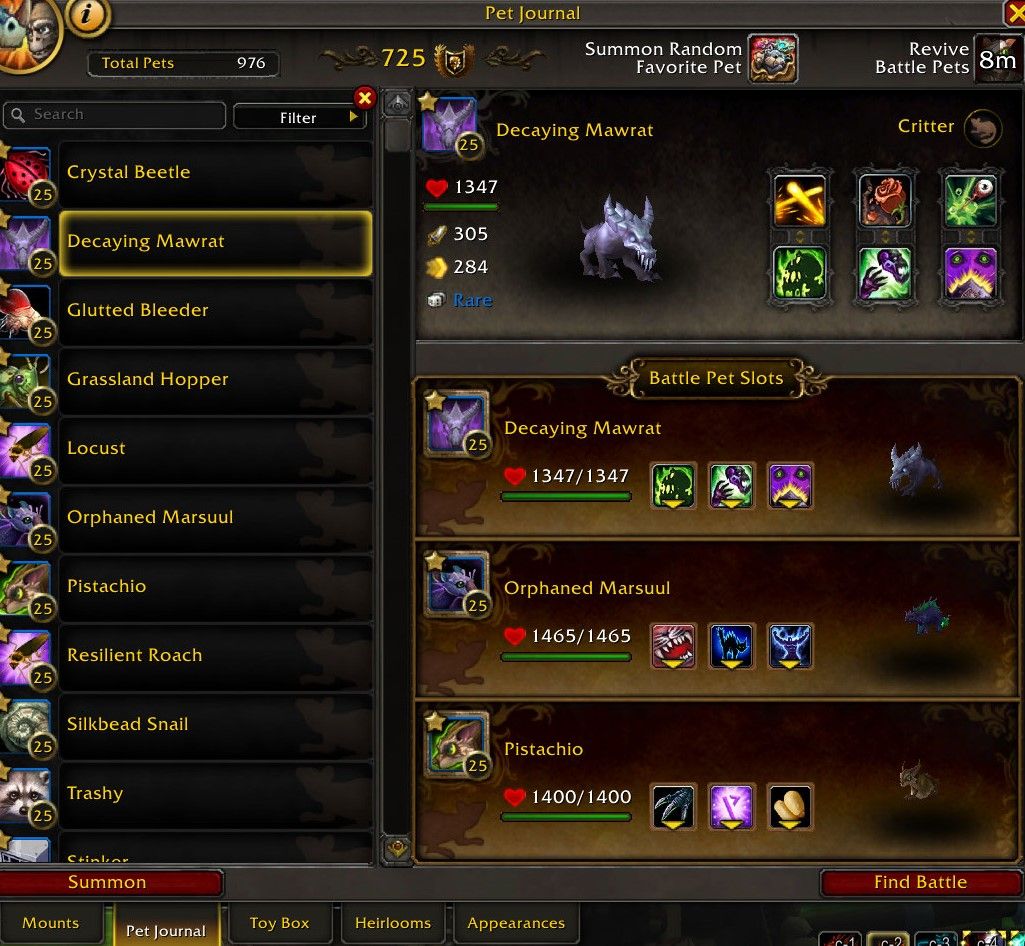 The critter-type team is a bit tricky since both Skritches and Phantus have an ability that deals bonus damage to them. As such, this is a reliable lineup for you to take:

For this, you’ll want to lead with Creeping Insanity then use Haunt next. These will kill Skritches by the time Creeping Insanity triggers. In the meanwhile, you can bring in Pistachio and use Wild Magic and Feral Clawstorm, and as soon as Skritches dies and Phantus is brought in, you’ll want to use Wild Magic followed by Nut Barrage. Pistachio will usually die after using those two abilities, so once you bring in your Orphaned Marsuul, lead with Crouch, otherwise, Phantus will kill you really fast. Then spam Bite until he dies. 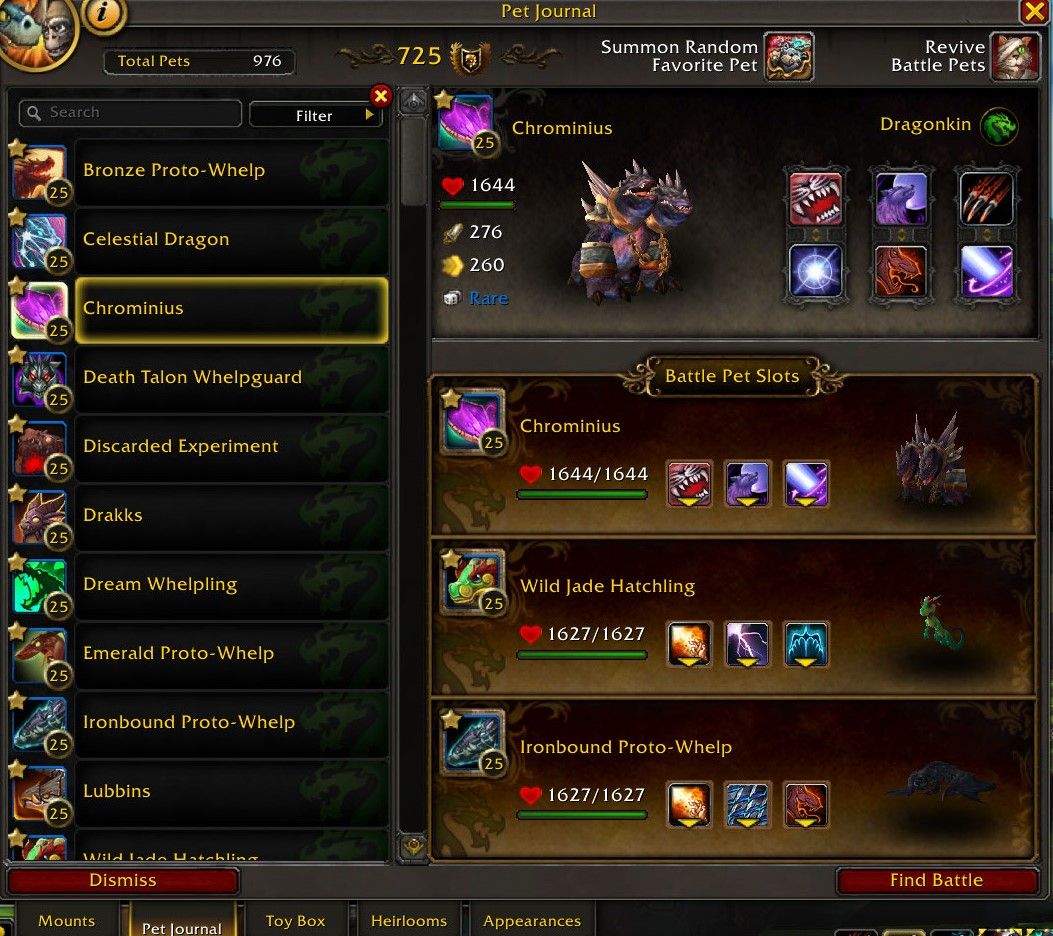 Your dragonkin-type team only requires two specific pets, as each one can simply one-shot each of Bakhushek’s pets:

Lead with Chrominius’ Howl and follow up with Surge of Power to one-shot Skritches. Then, unless Phantus has a critical attack, you’ll have the chance to use Chrominius’ Howl one more time before he is killed. Do this, then swap in your Wild Jade Hatchling and use Call Lightning (or any other dragonkin-type pet with that ability). This will nearly one-shot Phantus if it doesn’t crit, so just use Breath once afterward to finish him off. 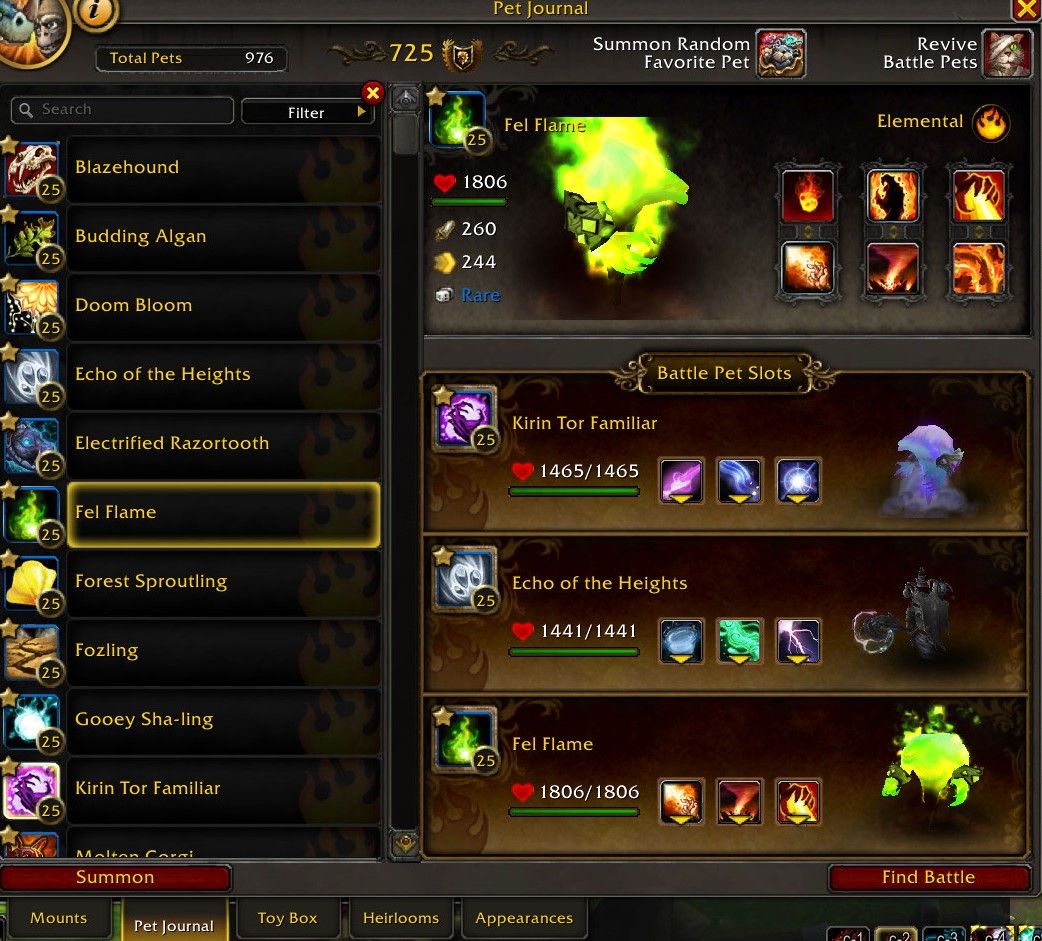 For the elemental-type lineup, we have:

Your Kirin Tor Familiar can reliably solo Skritches with its abilities that do bonus damage to flying-type pets, and your Echo of the Heights can come very close to soloing Phantus with Call Lightning. Fel Flame is just there as a solid third choice with a nice health pool to clean up the battle if you need to. 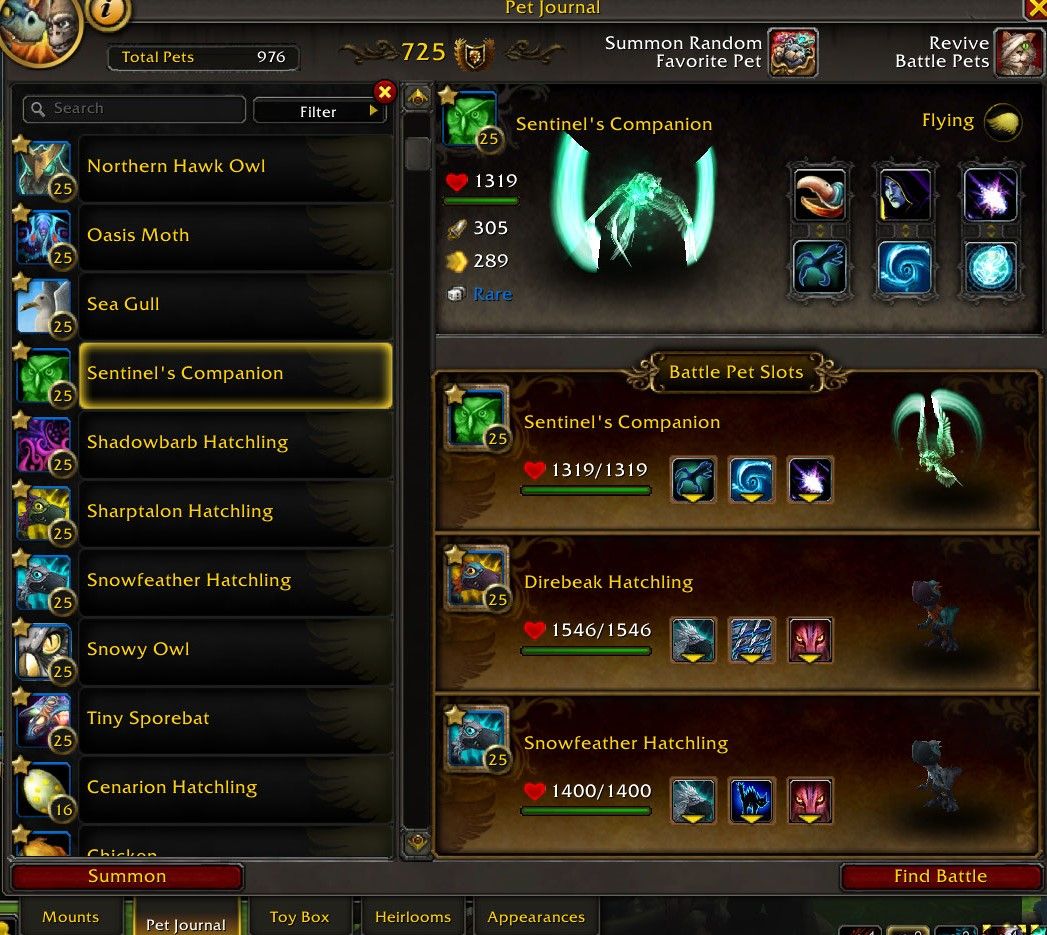 When it comes to your flying-type pet team, here’s what you want:

Sentinel’s Companion solos Skritches just by using Moonlight and Dark Talon twice. It can then get Phantus to roughly half health for your Direbeak or Snowfeather Hatchling to finish off. Just make sure you use their defensive first (Ironskin or Crouch, respectively), then Falcosaur Swarm!, and then Predatory Strike to execute. 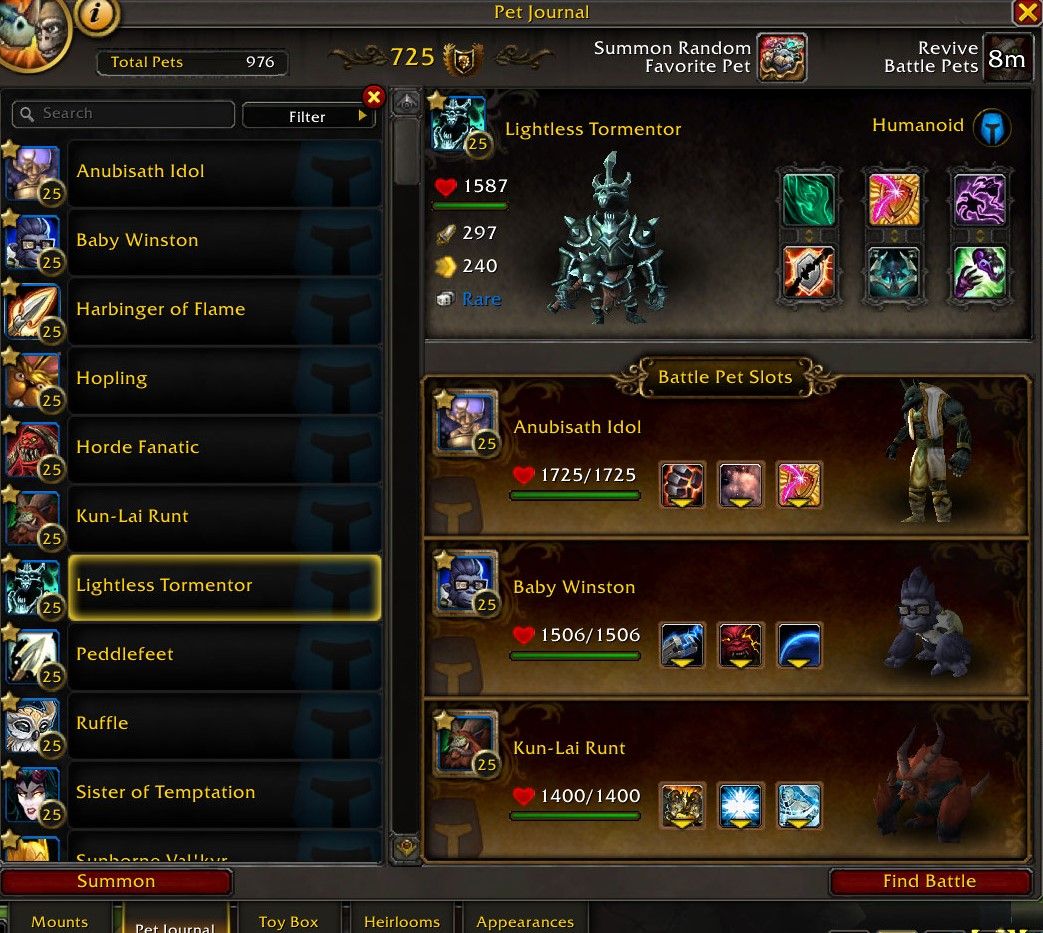 For humanoid-type pets, an Anubisath Idol can pretty much solo this battle. Just make sure you use his Deflection ability to dodge the first attack of Skritches and Phantus (Black Claw and Exposed Wounds, respectively), then use Sandstorm right afterward and every time it’s off cooldown.

There’s a chance your Anibusath Idol may miss some of his regular hits, so you might need a second pet to clean up the fight. Any humanoid pet will do, but Baby Winston is great because his first ability, Tesla Cannon, does bonus damage to beast-type pets. Here’s the lineup: 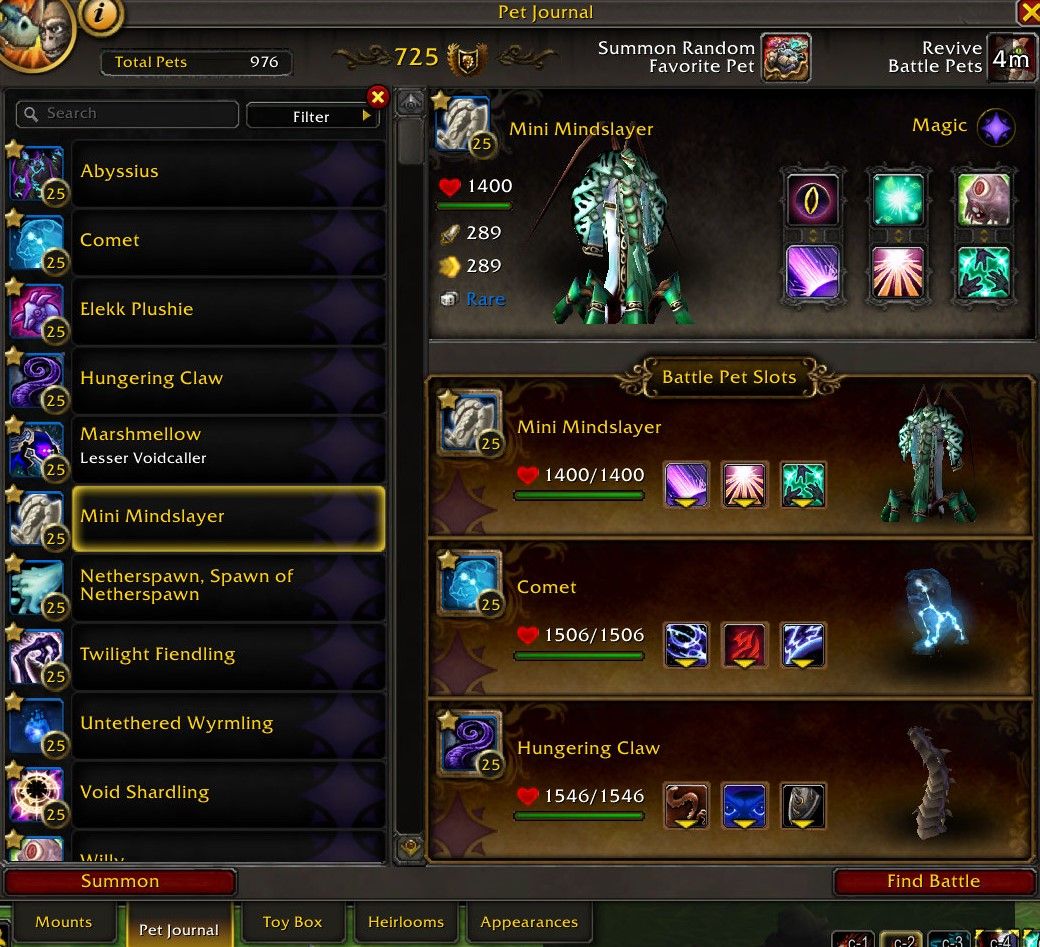 For the magic-type pets, Mini Mindslayer can put in a lot of good work, but it can’t quite solo Bakhushek’s team. As such, you only really need two pets here:

It is imperative that you lead with Mana Surge, as its triple cast will defeat Skritches. Once Phantus comes in, you can pass a turn, then use Life Exchange for maximum value, then bring in Hungering Claw (use Forboding Curse first here) to clean up the fight. 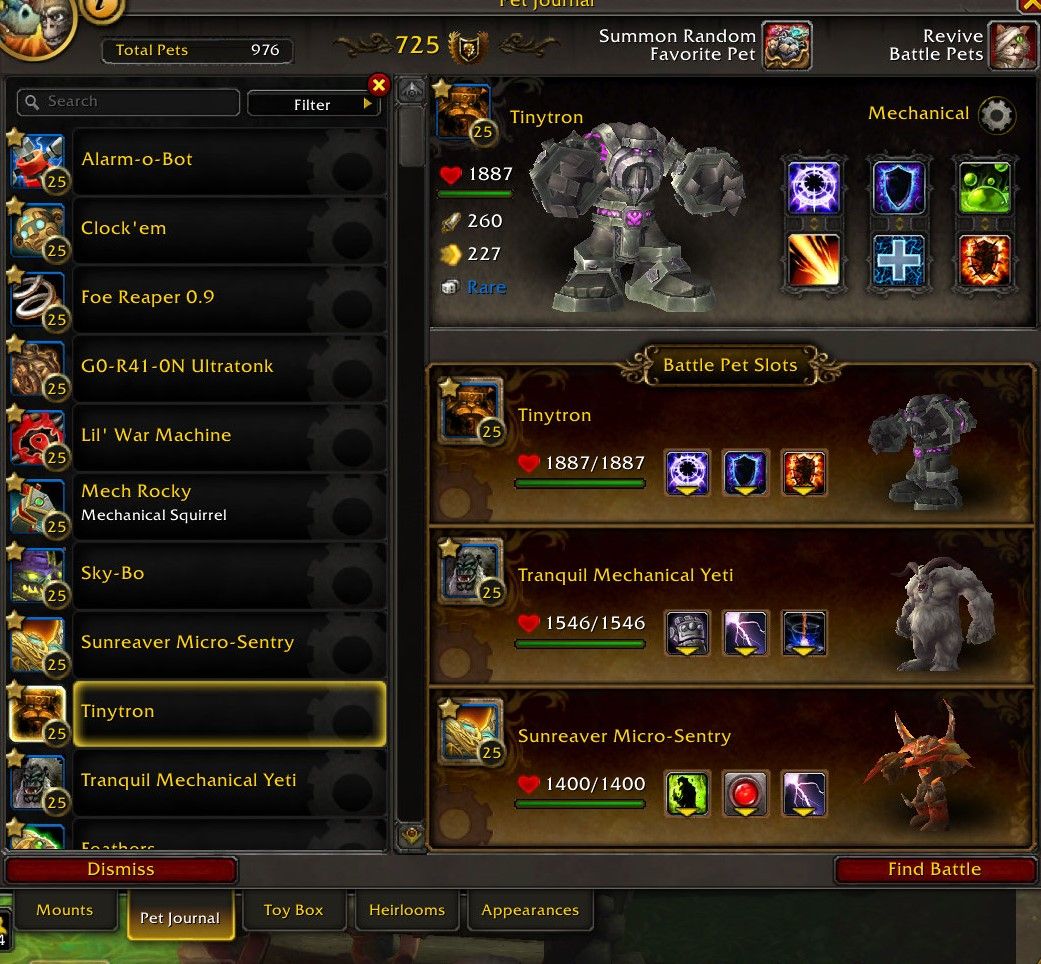 The mechanical-type team, as you could probably guess, includes Tinytron as your primary pet, since it is incredibly effective at dealing with Skritches. Furthermore, it practically follows the original, baseline strategy to a tee, as you’ll want to bring Iron Starlette and Tranquil Mechanical Yeti as your second two pets.

To be clear though, you’re not really going to need a third pet in this battle, as Tinytron will dispatch Skritches by itself, and either your Iron Starlette or yeti will dispatch Phantus by itself with their Call Lightning/Ion Cannon or Wind-Up/Supercharge combos. 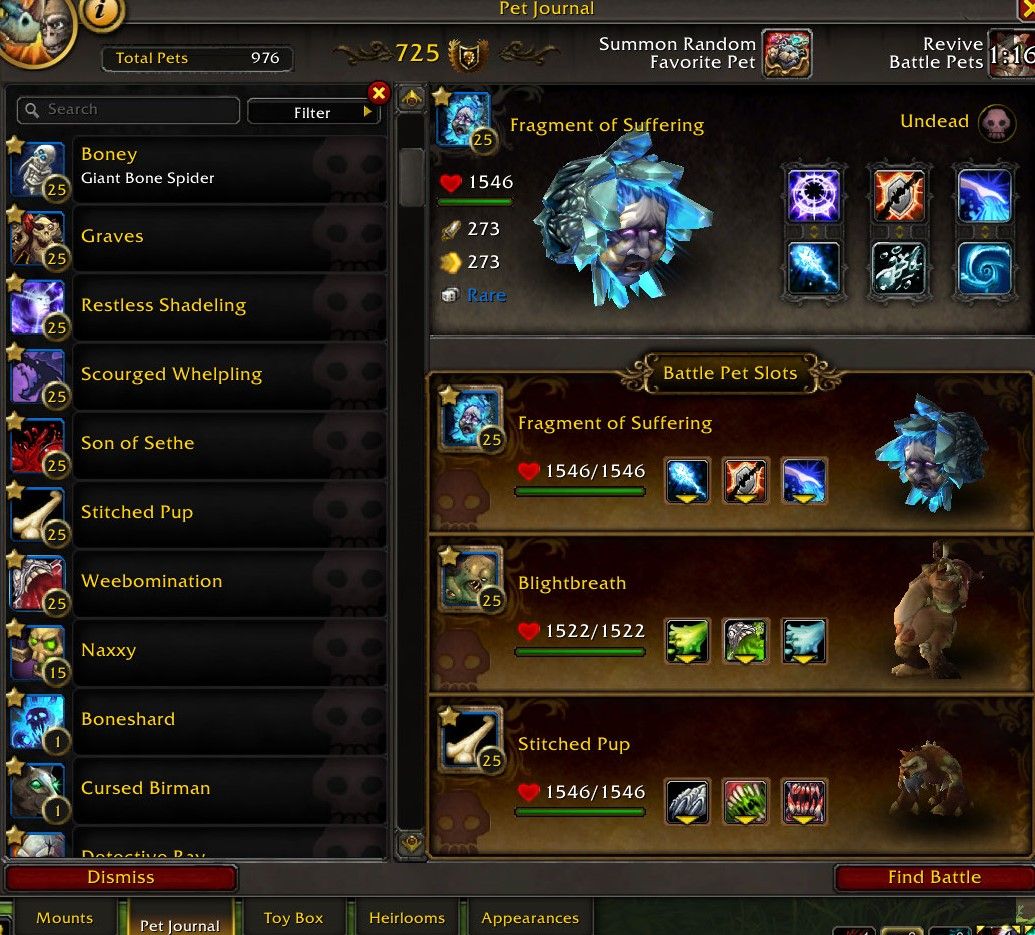 As with some of the former teams, you only really need two undead pets to beat Bakhushek:

Fragment of Suffering can solo Skritches because its abilities deal bonus damage to flying-type pets. Just lead with Drain Power then spam Spiritfire Bolt. He will also be able to get some good damage off on Phantus before he dies. Once that happens, Blightbreath can clean the battle up with his Toxic Smoke, which does bonus damage to beast-type pets.