Yu-Gi-Oh! Master Duel is here and with it a ton of decks to build and play with. There are so many options it can be intimidating, but if you're looking for a slower, more grindy Control deck, then Naturia is the deck for you.

Naturia decks function by using stun effects on their Monsters, stalling the opponent while bringing out their powerful Synchro Monsters. There are plenty of Naturia Monsters available in Master Duel, so knowing which ones are the best is key to building a strong Naturia deck. Naturia is a very cheap deck to build in Master Duel, as most of their cards are R rarity or lower. 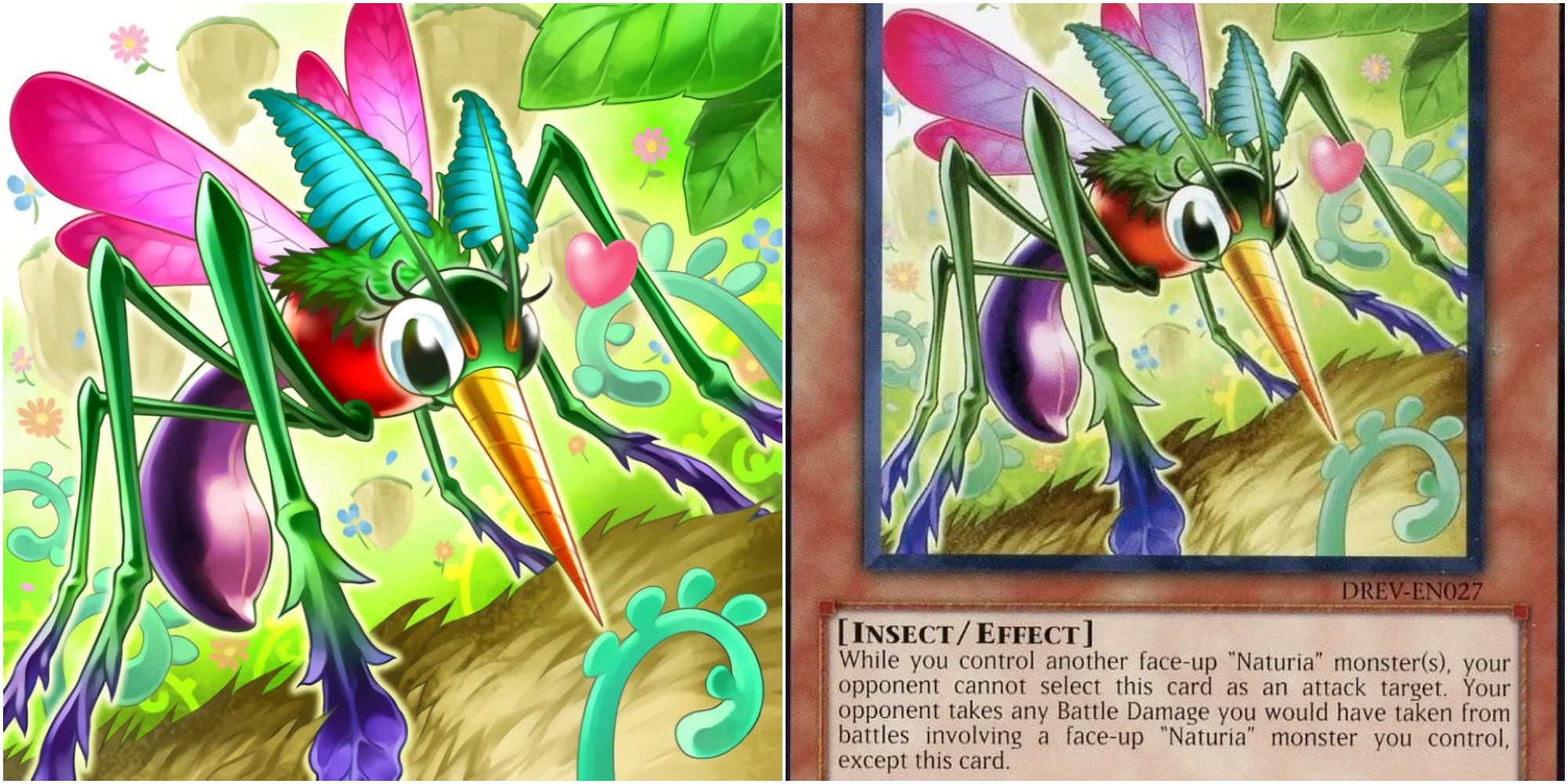 Naturia Mosquito is a card that is rather unassuming at first glance. It makes the opponent take Battle Damage from battles not relating to itself. In addition, if you control another Naturia Monster, the opponent can't target it for an attack.

What makes Naturia Mosquito good, is that it just requires another Naturia Monster, meaning this effect is live if there is another copy of itself on the field. Since there are two on the field, it locks the opponent out of attacking either one to ensure you will always have two Monsters on the field. 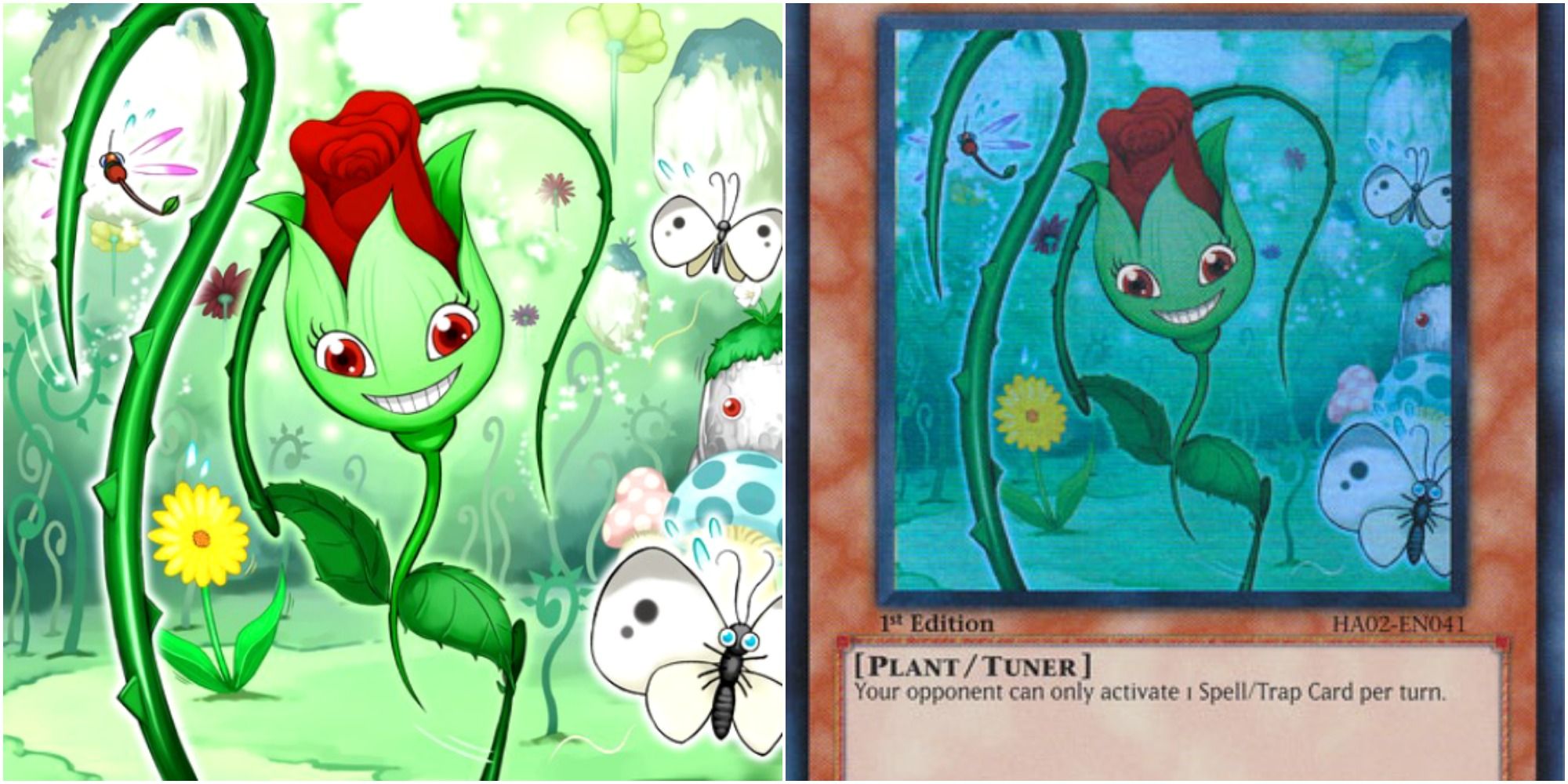 Naturia Rosewhip is a simple Floodgate-like effect that has the potential to force an opponent to stall out. It makes it so that the opponent can only activate one Spell or Trap card on their turn. It has a decent 1700 Defense as well, making it harder for some more traditional Normal Summons to get over it.

Naturia Rosewhip is one of the main stun cards of the deck, and contributes to Naturia main board control gameplan. It helps shut off the opponent's turn to ensure you can continue to build your own field presence. 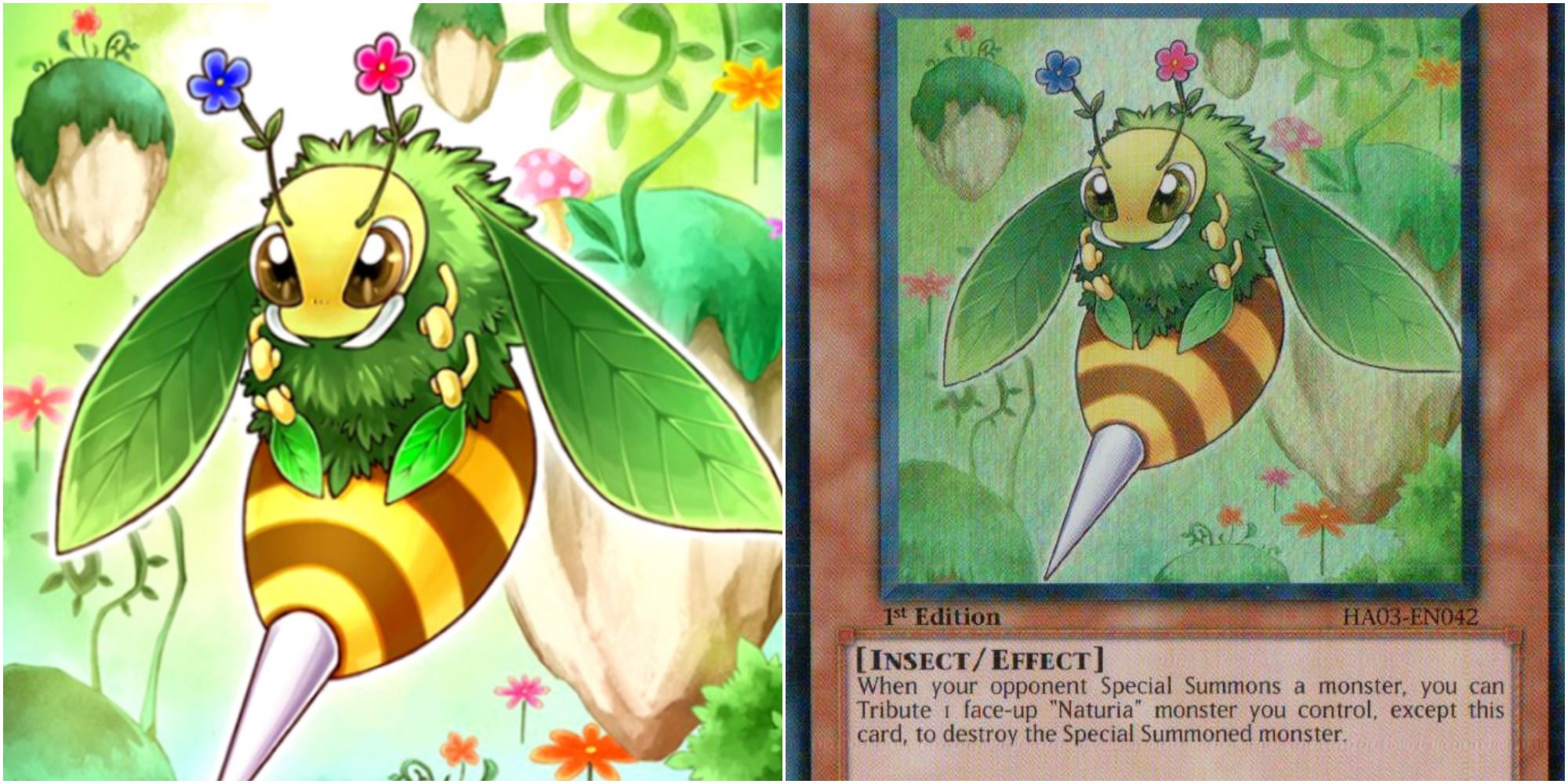 This effect isn't once per turn, so as long as you have Naturia Monsters on the field, you can keep up destroying any Monster the opponent tries to special summon. It has a decent Attack stat as well, ensuring that it's not an easy task to simply beat over it before summoning. 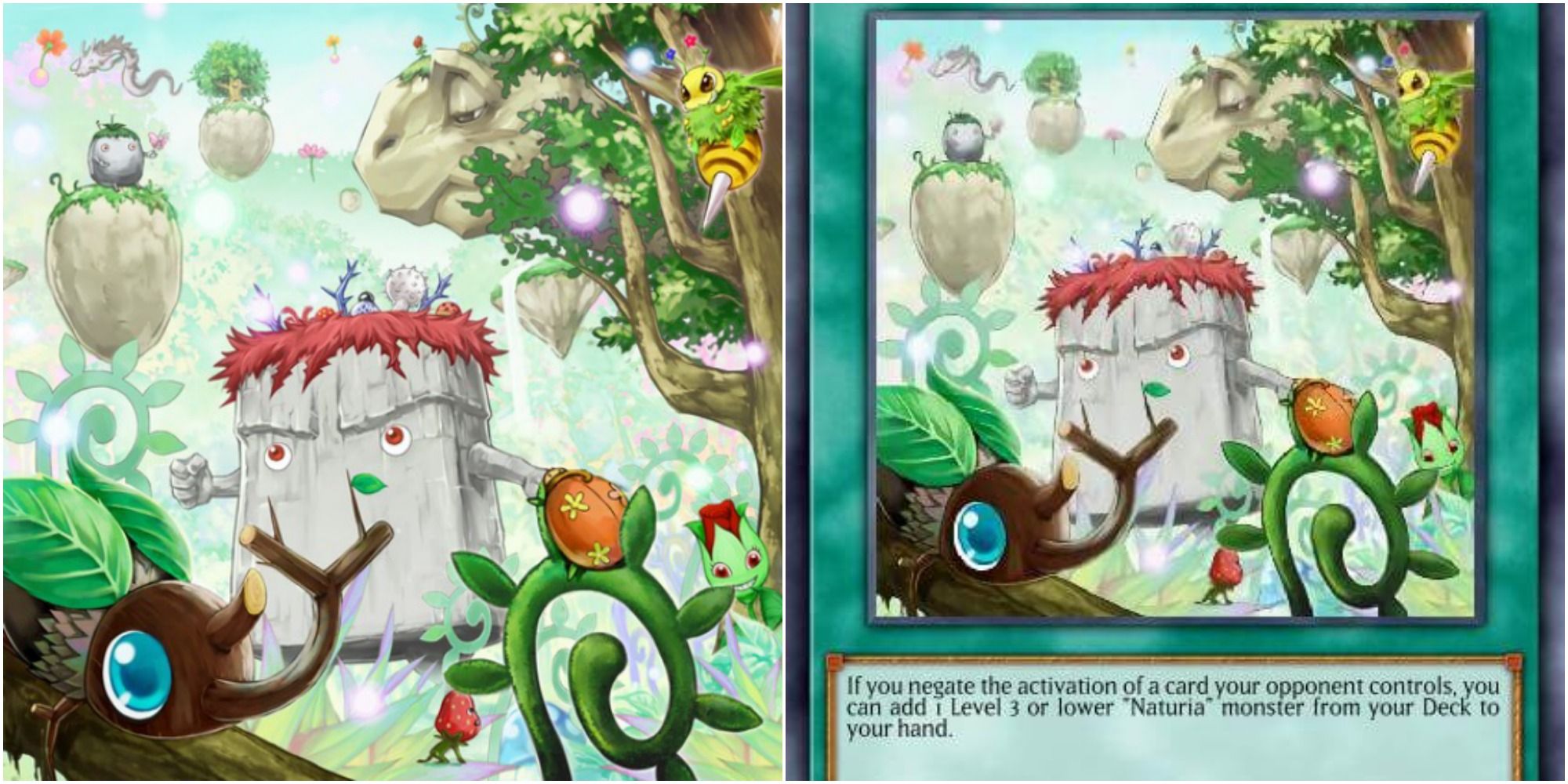 Naturia Forest is the Field Spell for the Naturia Archetype, and one of the most interesting ones out there. It only triggers when you negate the activation of a Spell, Trap, or Monster effect, but it isn't once per turn. This means if you negate multiple things you can continuously use the effect.

Naturia Forest lets you search your deck for any Naturia Monster that's Level Three or lower (which many are). Many searchers are restricted to only one use of turn, so a card that does it multiple times and rewards you with card advantage is fantastic. 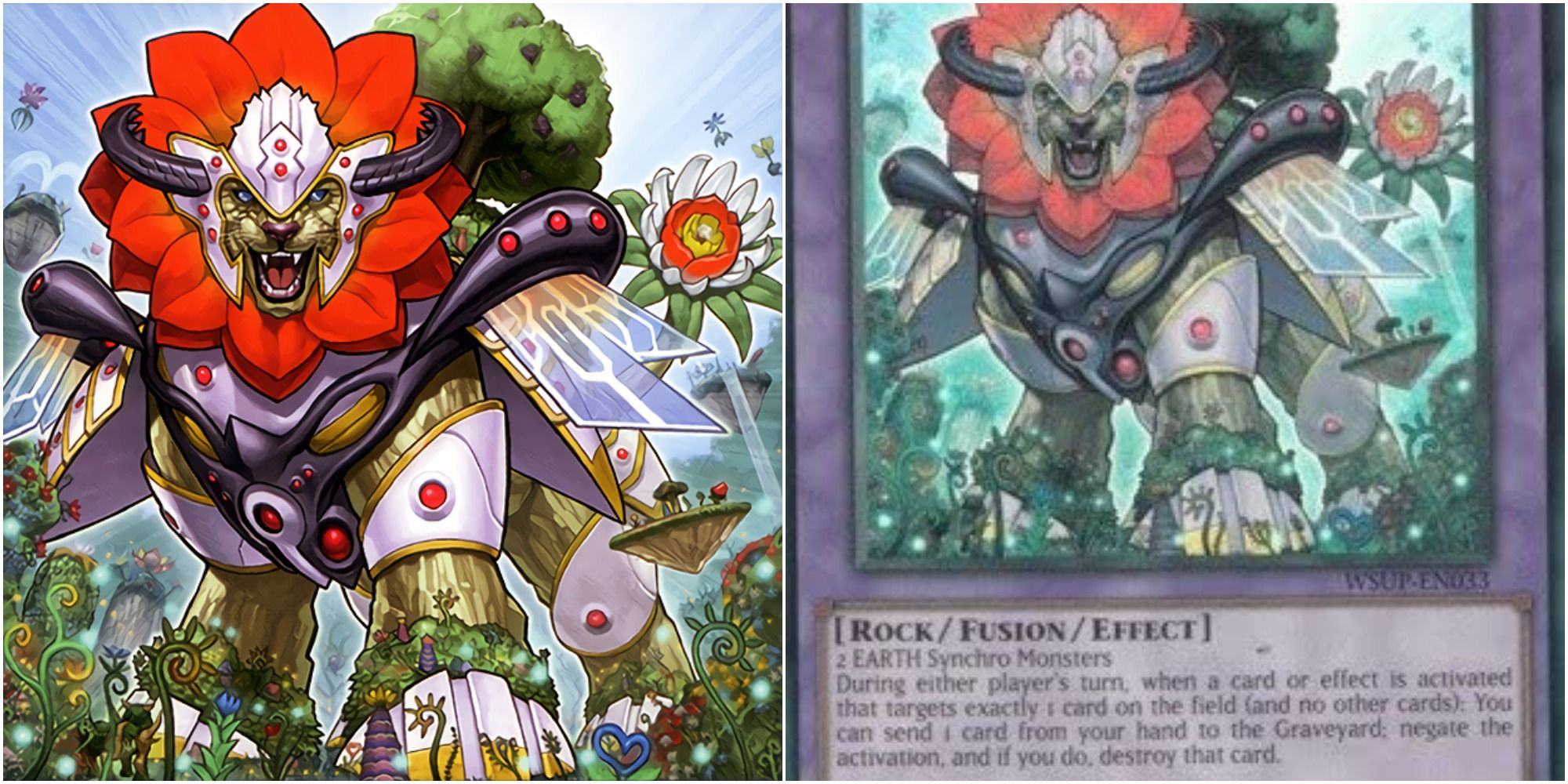 One of the two Fusion Monsters available for the Naturia Archetype, Naturia Gaiastrio requires two Earth Synchro Monsters as Fusion Materials to make (which all Naturia Synchro Monsters are). Once on the field, it makes for protection as well as destruction depending on the situation.

By sending a card from your hand to the Graveyard, Naturia Gaiastrio can negate the activation of any card that targets a card on the field. This includes both cards trying to destroy your own, and cards the opponent is trying to use to boost their own board state. 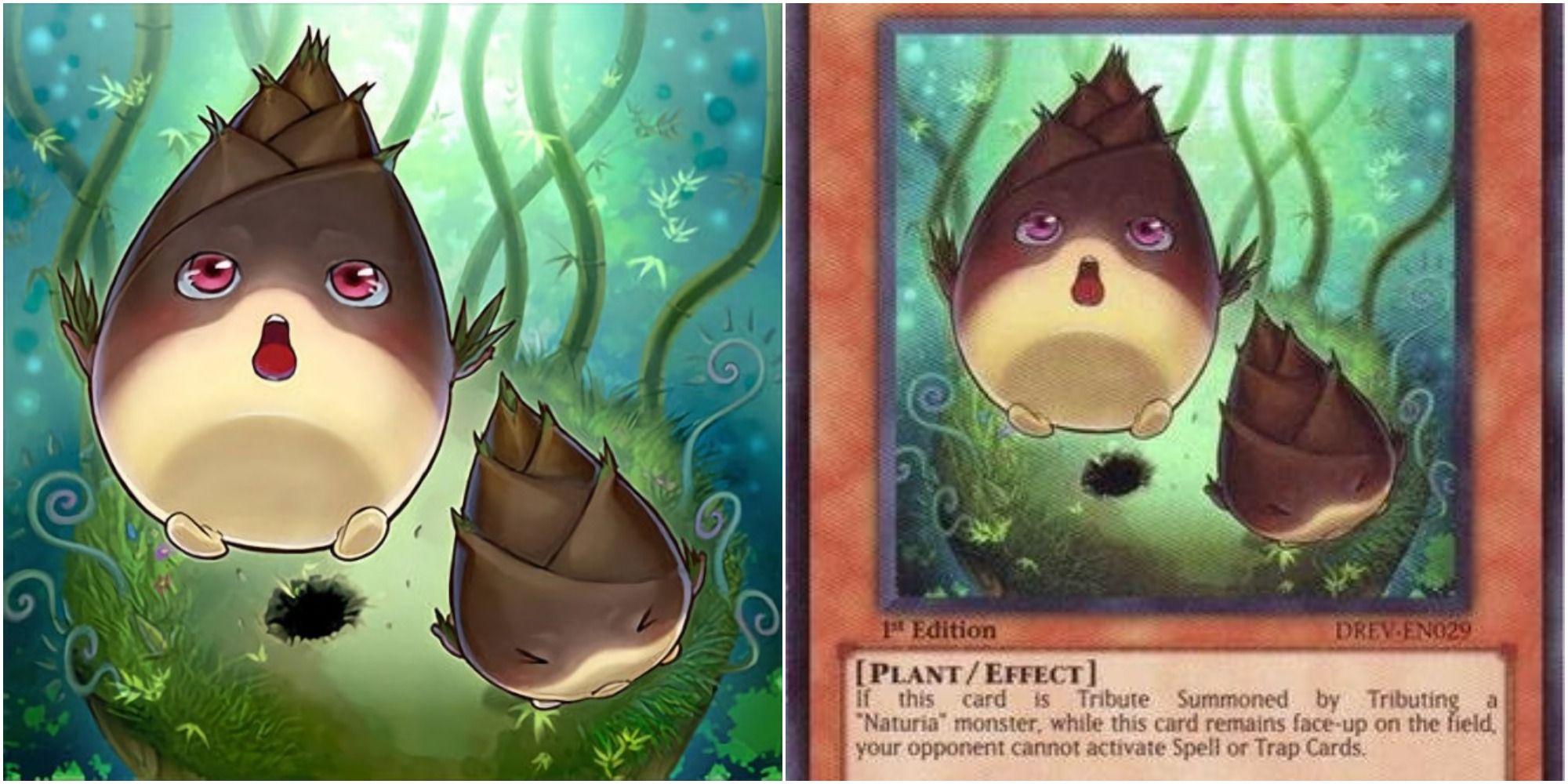 Naturia Bamboo Shoot is another signature stun card for the Naturia Archetype. It is a tribute summon Monster, but if it hits the field this way it shuts down the opponent's ability to use Spell or Trap cards (so long as you tribute a Naturia for its tribute summon).

It has a decent 2000 statline across the board, making it hard to get rid of without the use of Spell or Trap cards. It's a card you want to keep around once it hits the field, as it shuts down two-third of the card pool. 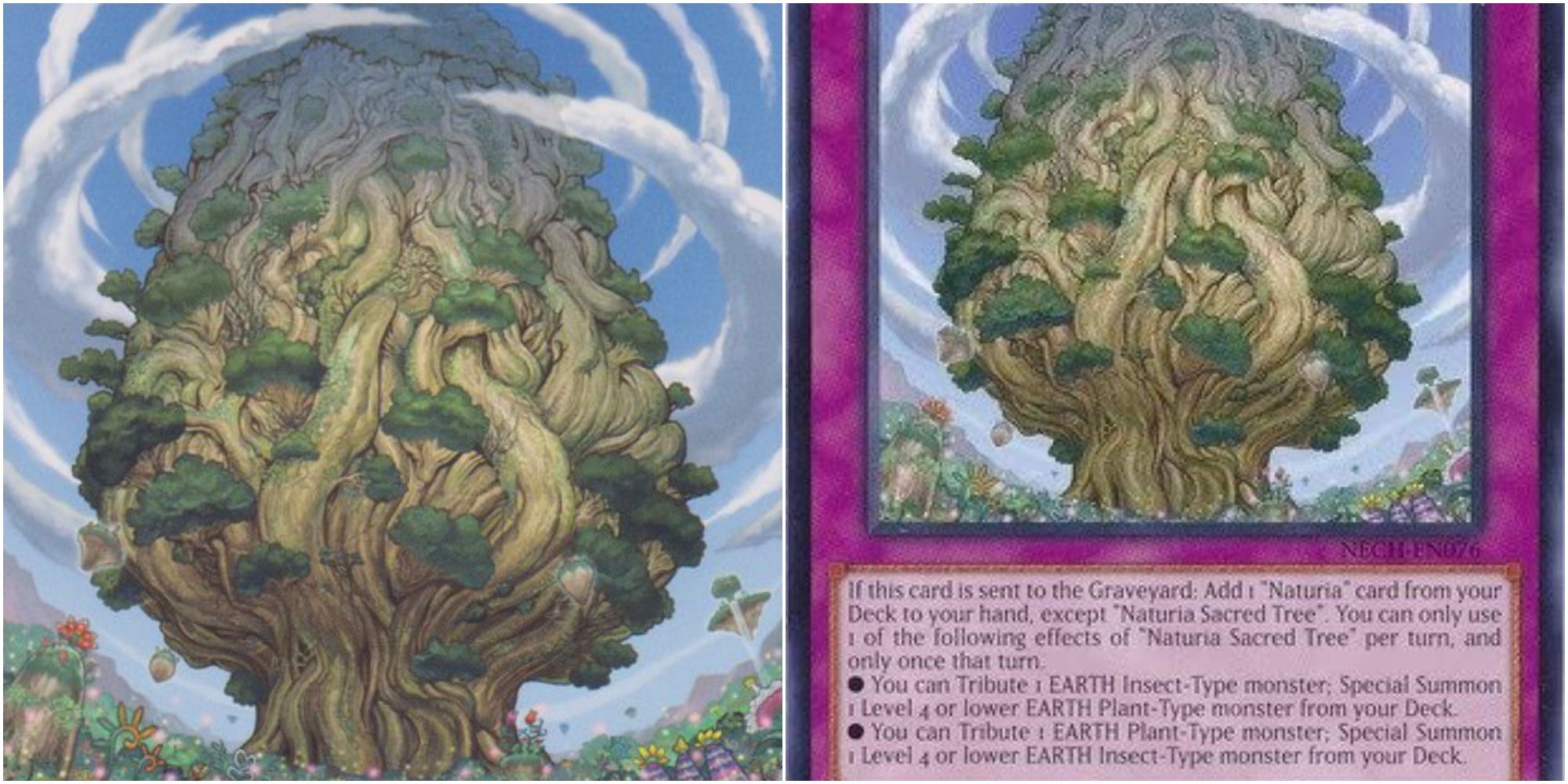 Naturia Sacred Tree is the only Continuous Trap Card in Naturia's arsenal, but it's a fantastic one to have. It essentially lets you tag out the Insect Type Naturia Monsters for the Plant Types, and vice versa. This lets you change out Naturia Monsters depending on what is best for the board state.

If it's sent to the Graveyard while on the field, it even lets you search out any Naturia card from your deck except itself. The search effect isn't once per turn either, allowing for multiple searches if multiple are destroyed. 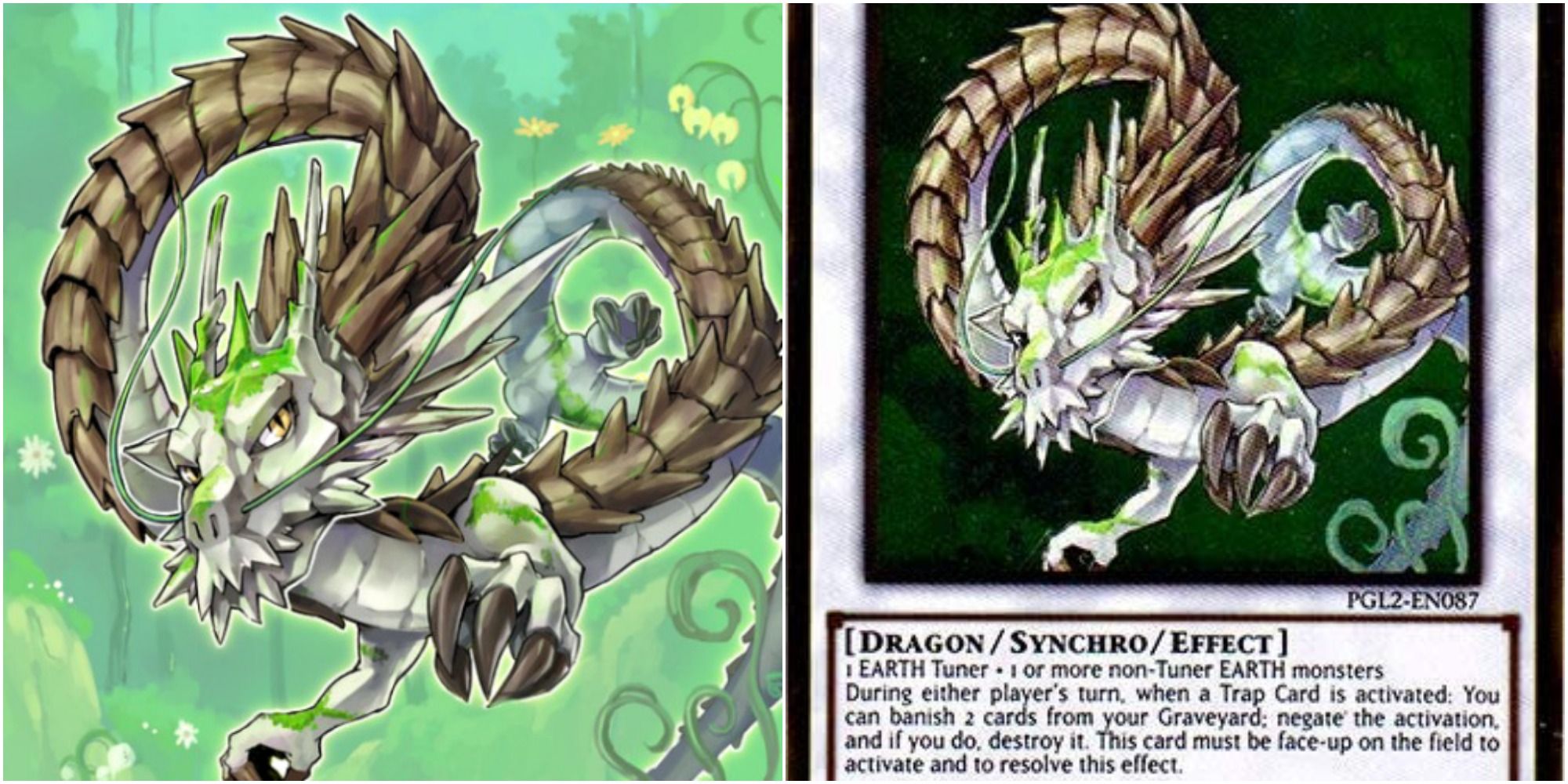 Naturia Barkion is one of the main cards you're looking to Synchro summon into. It is a Level Six Synchro Monster, requiring an Earth Tuner and a non-Tuner Earth Monster to make. 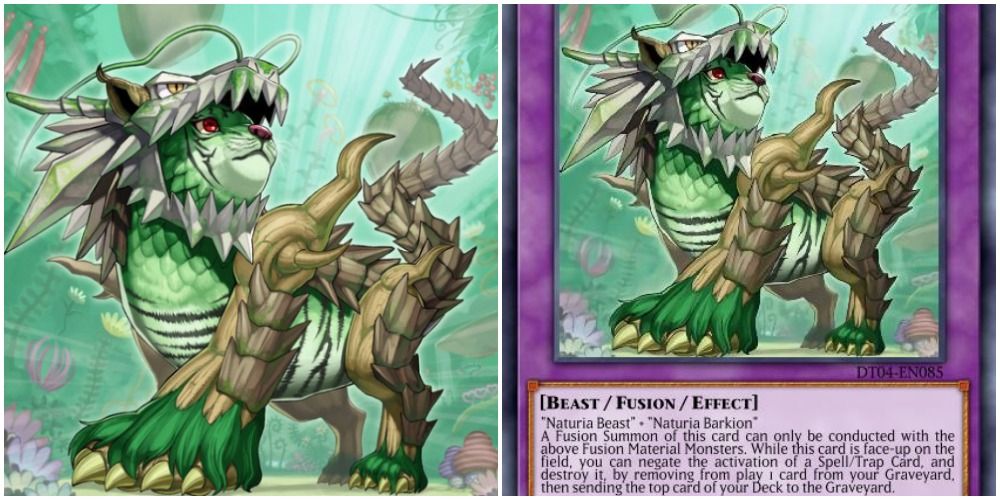 Naturia Exterio is a nice in-flavor Fusion Monster, needing Naturia Beast and Barkion as materials to make. It combines both their effects. Whenever a Spell or Trap card is activated, you can negate it by banishing a card from your Graveyard. Afterwards, you mill the top card of your deck, which ensures that you always have access to its effect.

It has solid stats as well, making it an incredibly hard card to get rid of. It doesn't have to be properly Fusion Summoned either, meaning it can be cheated out with a card like Waking The Dragon. 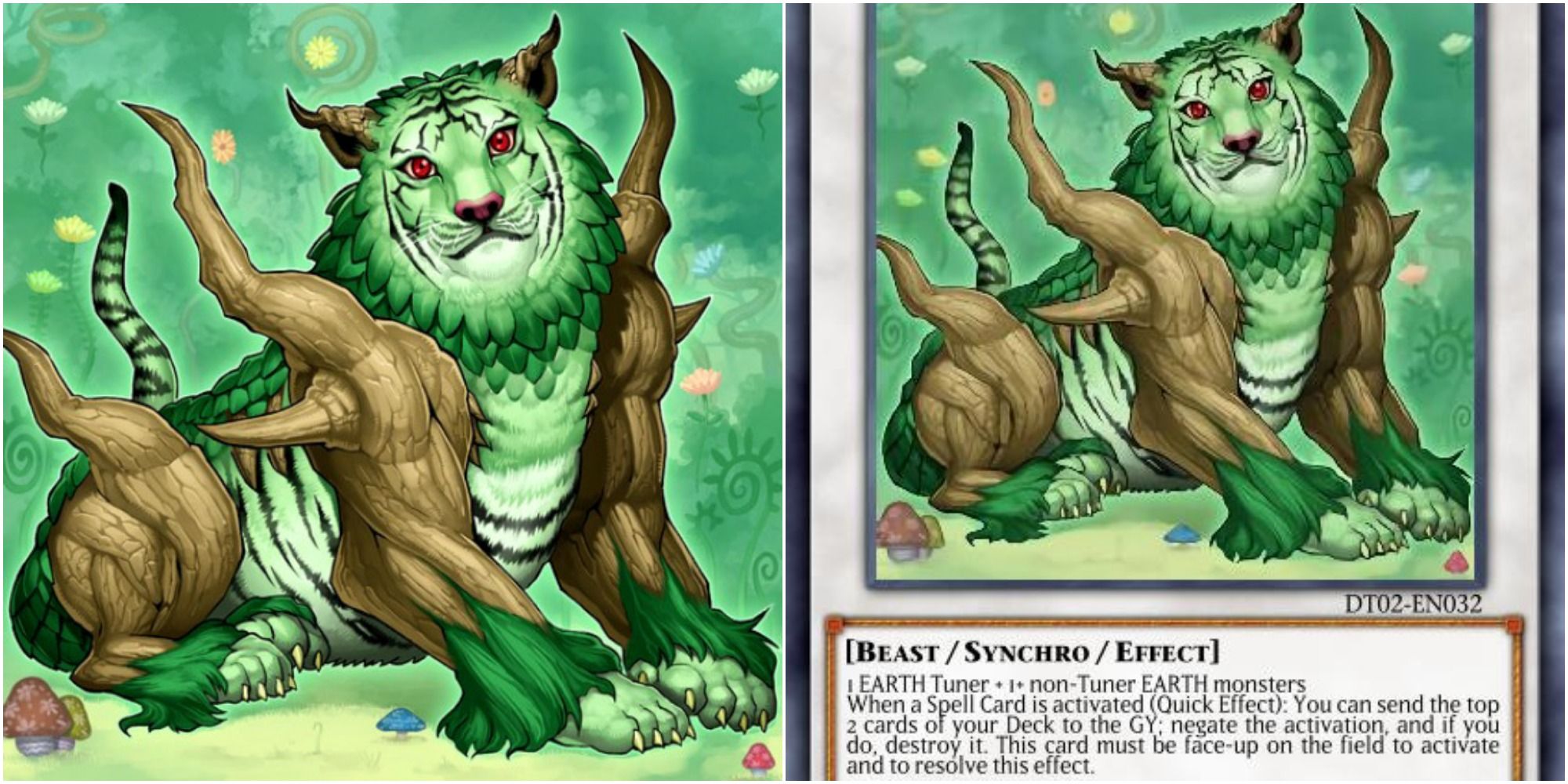 Naturia Beast is not just the best Naturia Synchro Monster, it's a contender for one of the best Synchro Monsters ever printed. It requires semi-generic materials to make, needing an Earth Tuner and one or more non-Tuner Earth Monsters. It's only a Level Five Synchro as well, which plenty of decks can make.

Naturia Beast lets you keep on negating Spell cards, at the simple cost of sending two cards from the top of your deck to the Graveyard. These even combos with Naturia Barkion, to keep the opponent off Spell and Trap cards until they take care of both Monsters.