Publisher Skybound Games and developer Beamdog deserve a medal. Just getting the 21-year-old Baldur’s Gate, and the only slightly less ancient Baldur’s Gate 2, up and running on Nintendo Switch is a triumph. That it runs extremely well is definitely a bonus, but the real victory here is the control scheme.

This is the first time I’ve truly enjoyed playing an isometric role-playing game using a controller. Its only limitation is a nearly useless tutorial mode, which all but ignores some of the new control scheme’s best features.

Baldur’s Gate is a classic, party-based RPG built on the Advanced Dungeons & Dragons ruleset. Players design a single character, and then build out a party of up to six adventurers while tackling the foulest demons ever to assault Faerûn’s Sword Coast. Traditionally, it’s been played with a mouse and keyboard, but there was also a port for tablets that has been mostly written off for its abysmal touch interface.

Like more modern titles such as Dragon Age, players’ need to control every single member of the party both in combat, and out. That’s easy enough using mouse clicks; just touch a spot on the ground and selected characters will move to that point. Those actions are much more tedious with a controller, however.

What Beamdog has done is build two completely different control schemes for these games. By default, players move a big, clumsy cursor around the screen, which works OK. But the second control scheme maps movement directly to the left thumbstick. Now you can walk a single character around — or the entire party, in formation — like you’re playing a modern third-person RPG. It’s a game changer, and makes general movement and combat much more manageable on the console.

However, you lose the ability to point and click at objects on the map once you lock the control stick to movement. So Beamdog has turned each point of interaction into a hotspot that automatically shows you a contextual icon. Move the party close to a locked chest, and you’ll get the icon for lock picking. Move to a stairwell, and you’ll have the option to move on to the next floor of the dungeon without the repetitive, annoying reminder to “gather your party.” It’s a much more elegant way to play the game, rivaling, and in some ways exceeding, the original experience on PCs.

The game’s tutorial, unfortunately, explains virtually none of this, and there are a number of other thoughtful additions I found just by messing around and exploring.

While you can flip between the two control schemes with the left and right buttons on the D-pad, zoom is mapped to the up and down buttons. Pulling way out is a good way to see how the game’s fog of war system impacts play. The shoulder buttons allow you to scroll between members of your party quickly, while clicking both shoulder buttons at the same time automatically selects the entire party. There’s even a handy radial menu mapped to the right trigger that allows you to access things like your spellbook, or the option to take a quick rest. 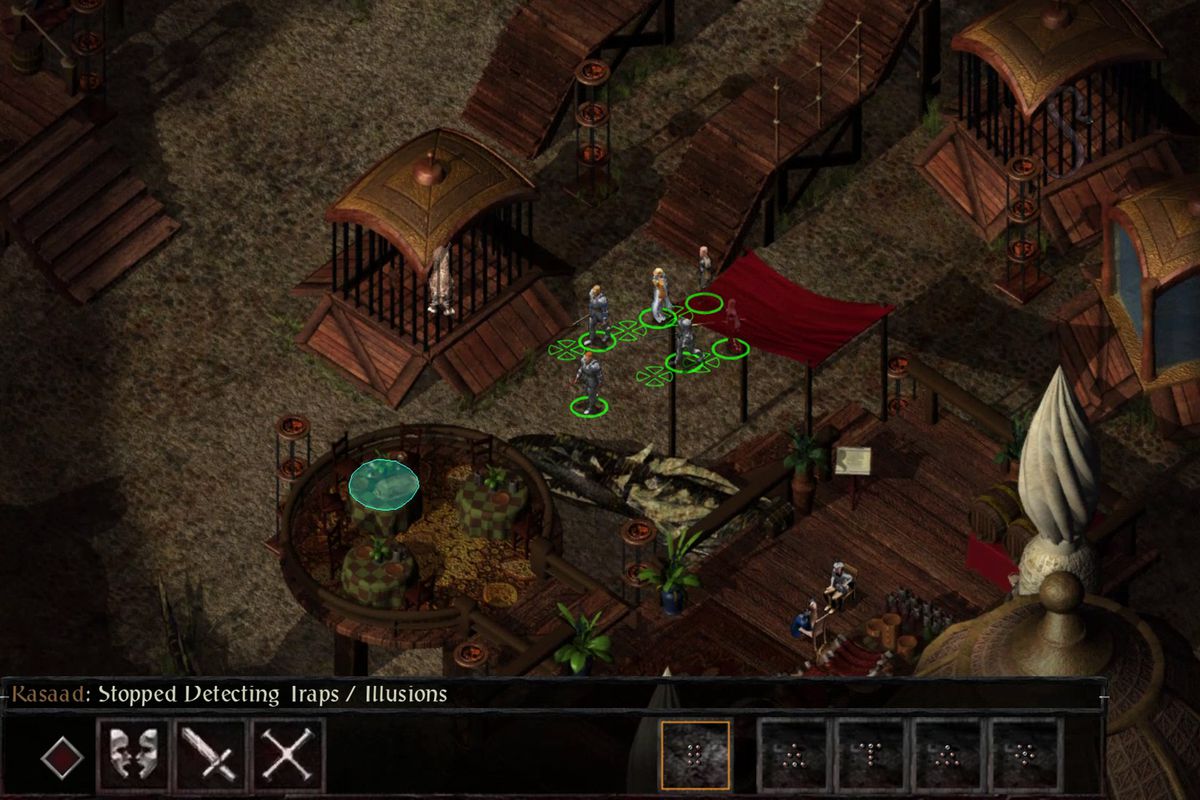 A scene from the bazaar in Baldur’s Gate 2: Enhanced Edition.
Beamdog/Skybound Games

The truly fascinating part of Beamdog’s implementation is that it actually makes the game much faster to play. After just a few hours I’m sailing along on my adventure, much further along than I’ve been in past iterations of the game without putting in more hours. This is the best revamped control scheme for an entire genre since Firaxis released XCOM: Enemy Unknown in 2012.

Baldur’s Gate and Baldur’s Gate 2: Enhanced Editions are available together for $49.99 on Nintendo Switch. The set includes some 200 hours of gameplay, including the Seige of Dragonspear expansion. They’re also available for PlayStation 4 and Xbox One for the exact same price.

Also being released alongside the Baldur’s Gate series is Planescape Torment and Icewind Dale: Enhanced Edition, also available for $49.99, on all three platforms. Neverwinter Nights Enhanced Edition is also currently in the works by the same team, with a release window set for early December.