Cadence of Hyrule is one of the few Legend of Zelda spin-off ideas that is nearly as good as its source material. But if you haven’t played the game that its rhythm action is based on, Crypt of the NecroDancer, you might find yourself stumbling through this adventure.

Whether you’re struggling to keep a beat or are having trouble learning Cadence’s unique style of combat, here are several tips to help you bop your way around Hyrule successfully.

FOUR ON THE FLOOR

To maneuver and fight your way through this rhythm-focused version of Hyrule, you’ll need to move to the beat of the music to accomplish anything. Thankfully, you won’t need to keep up with any complex rhythmic patterns like you would in Dance Dance Revolution. Instead, everything in Cadence of Hyrule is grounded in a “four on the floor” rhythm. 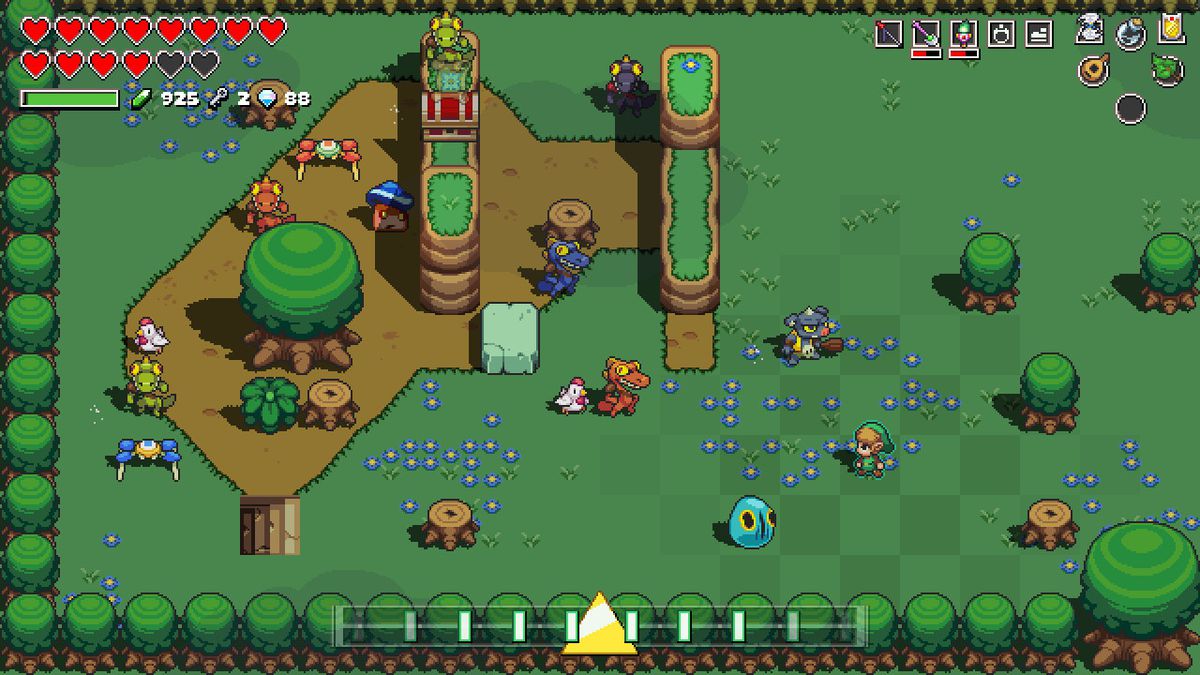 Struggling to stay on beat, look at the rhythm on the bottom of the screen
Brace Yourself Games/Nintendo via Polygon

Of course, you can always turn off the beat-based combat and move things at your own pace. There’s no shame in doing that.

Enemies will also move and attack to this same rhythm. Knowing this will help you better read and understand how they attack.

Every enemy telegraphs its attack on the beat before it actually attacks. Moblins raise their arms before they take a swing. Wolves squint before striking. Tektites crouch down before attacking diagonally. 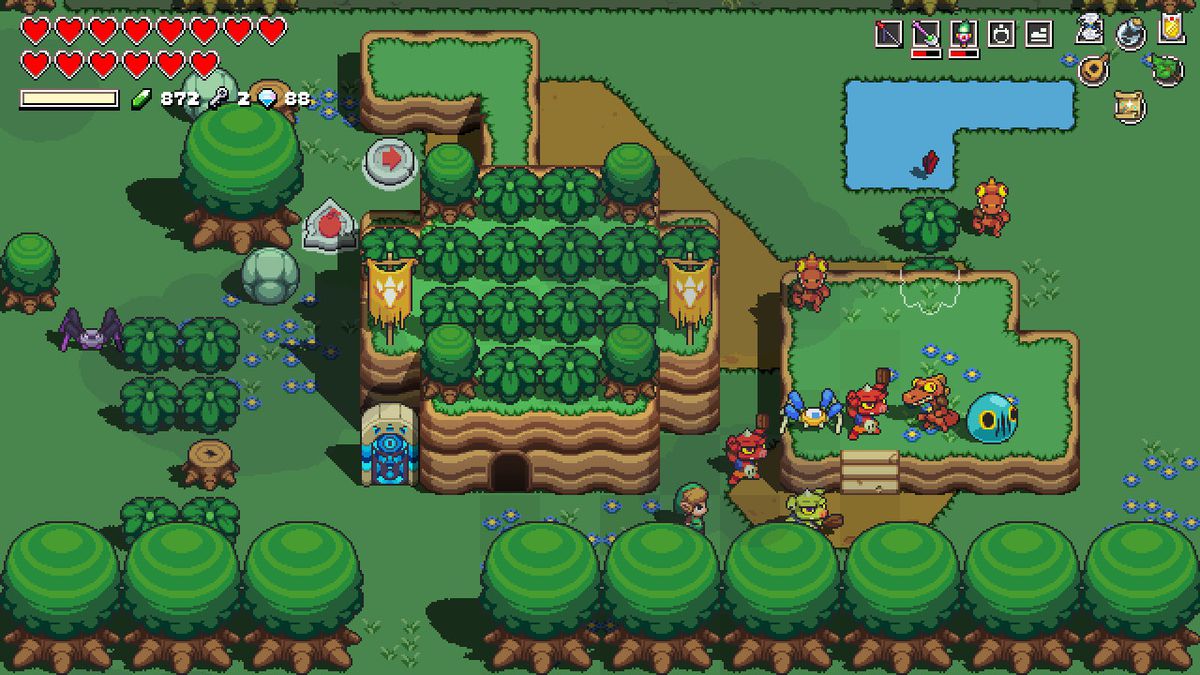 By being mindful of when enemies will attack and in which direction, you can position yourself so you won’t get hit. It takes time to master, especially when most dungeons have multiple enemies attacking at different times, but after a while, you’ll be able to soar through encounters untouched.

At the start of the game, Cadence and Zelda will only have a dagger, and Link will only have a short sword. Moving into a square that has an enemy on it will automatically attack them for one point of damage. While these meager weapons can you through the entire game, equipping and mastering other weapons will make it easier. 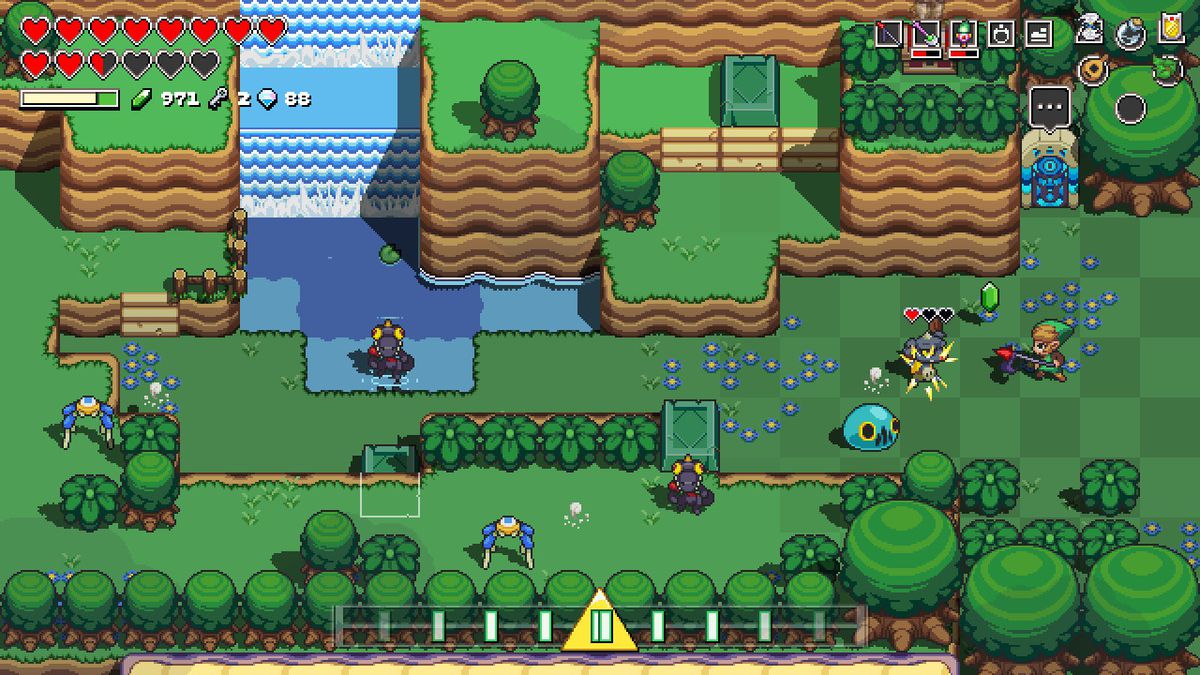 Once you find these weapons — often in chests in the open world, in dungeons, or shops — you’ll notice how much they change combat. The spear in particular is powerful because you can actually hit an oncoming and attacking enemy before it can even reach you, since the spear will attack anything two spaces in front of you. Used well, you can keep even the toughest enemies at bay and whittle down their health without a scratch.

You may also run across glass weapons that are stronger versions of each weapon type. They make short work of just about anything, but they’ll break if you take damage so be careful when using them. In fact, all weapon types will come in different flavors, allowing you to do things like sap life from enemies or poison them. You can choose whichever you like from your item menu and make it your default weapon.

MAKING THE MOST OF SHOPS

You can find shops throughout Hyrule and its dungeons. The shopkeeper found at them is actually the same one from Crypt of the NecroDancer — and just like that game, you can find him easily if you listen for him. If you hear an odd voice singing along to the song’s melody, then you know a shopkeeper is close. 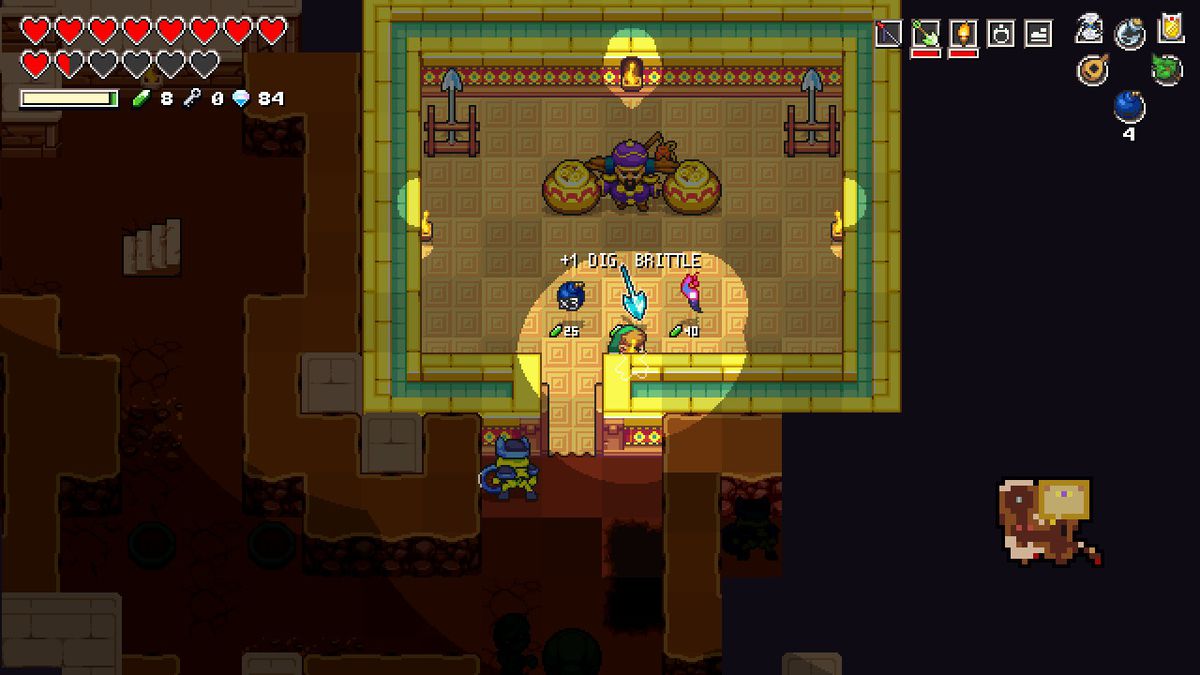 Those walls aren’t just for show. Blow them up for rupees!
Brace Yourself Games/Nintendo via Polygon

In the overworld, you will faintly hear his singing on map tiles that have a hidden, bombable wall. Blow through the wall, and you’ll be able to enter his shop. In dungeons, you’ll find his shop lined with golden brick walls. Those walls aren’t just for show: You can actually bomb those and get some rupees in the process. You may also blow up the shovels on display to drop a shovel you can use if you don’t have one in your inventory.

Be warned though: If you hit the shopkeeper, he will fight back with devastating force.

I’ve had the most fun playing Cadence of Hyrule in co-op mode. Not only was it a blast to see Link and Zelda tear through Hyrule together, but this two-player mode also makes the game easier to survive.

If either player dies, the game isn’t over. The other player can travel back to any Sheikah Stone they’ve activated to revive their partner. This really came in handy when I was first playing the game and exploring. Often we’d run into a tile that was difficult and one of us would fall. From there, we’d teleport to the closest Sheikah Stone and make our way back and retry the tile again.

Co-op mode is a great way to play through the game since the backup that your partner provides can help you get through difficult spots. Plus there’s the inevitable moment when you and your partner get in sync, both through the gameplay and rhythm, which is really charming.

That said, dying is a part of Cadence of Hyrule. It will happen often. This concept may feel unfamiliar to fans of the Legend of Zelda franchise, but it’s a major part of the game’s Crypt of the NecroDancer DNA. Keep that in mind, and don’t get frustrated. Expect to die and retry several times.

Once you get a handle on how to move through the world properly, how enemies attack, and what weapons you like, Cadence of Hyrule’s rhythm will really get you.

Correction: Glass weapons break when the player is hit, not after a set amount of uses. This guide has been edited to reflect this.