Update: Mortal Kombat 11’s closed beta is now live for those who have received access.

If you haven’t, be sure to stay tuned to IGN, as we’ll be covering the beta in detail for you as we play, including our livestream of the MK11 beta.

And if you haven’t seen it, be sure to check out the updated confirmed roster of Mortal Kombat 11 fighters, including the latest trio of confirmed MK11 characters.

The closed beta dates for Mortal Kombat 11 have been revealed, and those who have pre-ordered MK11 on PlayStation 4 and Xbox One will be able to play beginning next week.

Announced via the official Mortal Kombat Twitter, the closed beta will begin Wednesday, March 27 at 8am PT/11am ET/3pm GMT and will end on Sunday, March 31 in The Americas at 11:59pm PT/2:59am ET and at various times on Monday, April 1 for the rest of the world.

You can see the full breakdown below; 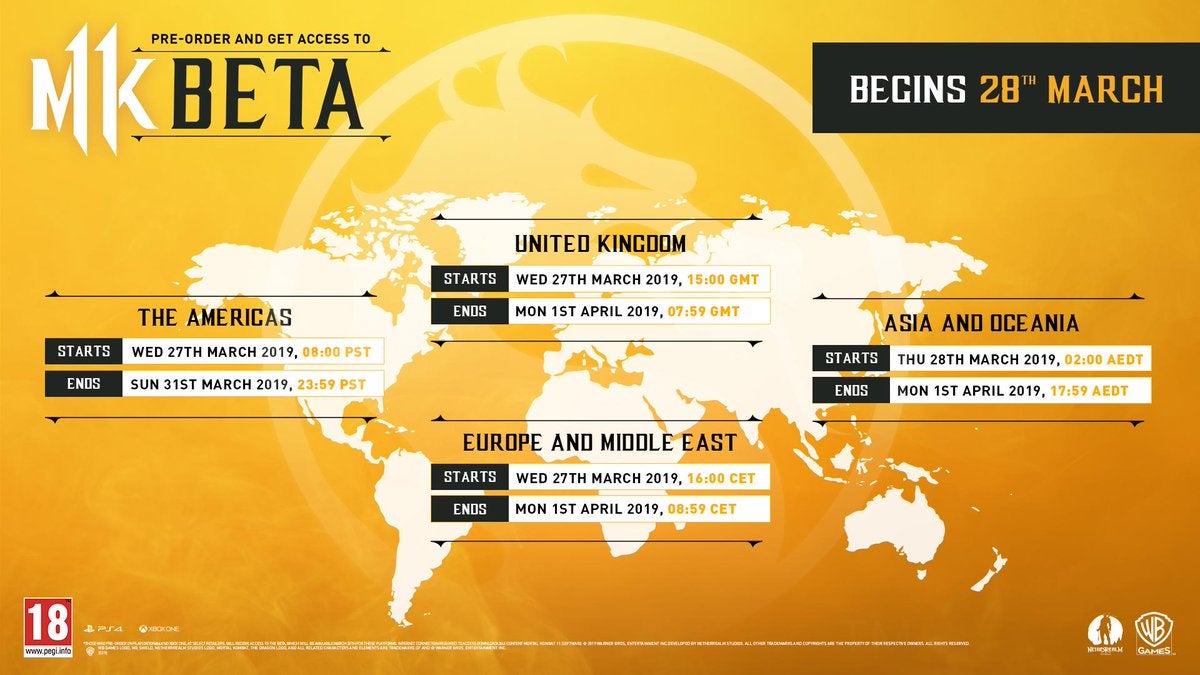 No further information has been revealed for the closed beta besides the start and end dates, but this will be the first time many will get to try out the latest entry in the Mortal Kombat franchise that began all the way back in 1992.

As it stands, there are currently 19 confirmed (konfirmed!) characters for MK11 with the recent announcements of Cassie Cage, Jacqui Briggs, and Erron Black.

All those characters and more will also be appearing in the game’s story mode, which is said to be a “time-bending narrative” that will feature Kronika, the first female boss in MK history, and her powerful and loyal servant, the sand and time manipulating Geras.

For more on MK11, be sure to check out 16 guest characters we would love to see join the roster and take a look back at the entire Mortal Kombat story up to this point to prepare for MK11.

Adam Bankhurst is a news writer for IGN who will be playing this closed beta and looks forward to seeing some of you on the battlefield. You can challenge and follow him on Twitter @AdamBankhurst.