The results of Splatoon 2’s final Splatfest, which transpired over the weekend, are in: Chaos has won. Pearl is the ultimate victor … if you go by the official results. But if you read into the undertones of the post-event dialogue between Pearl and Marina, it’s possible you’ll pick up on something more.

Pearl and Marina are the stars of Off the Hook, an in-game music act who always play a set for Splatoon 2’s Splatfest events. During Splatfest, players are asked to pick between two sides, and then go on to fight against the opposing team. At the end, whoever has the most votes and wins takes home the gold.

Every time an event ends, Pearl and Marina discuss the results with plenty of banter. In the first Splatfest, for instance, Marina declares that Splatfest made it so ice cream can legally be considered better than cake. Sometimes, the exchanges could be suggestive — during the invisibility-versus-flight event, Marina says, “With invisibility, you could spy on people while they’re … inking their Splat Zone.”

For the final Splatfest, the dialogue took a slight turn. Instead of being lighthearted, the pair got sentimental about how long they’ve been performing together. For a while, it almost sounds as if Pearl is breaking up with Marina. Later, this turns out to be a fake-out. Pearl reveals that she simply wants to break into more genres of music, as you can view below:

If you look closely at Marina’s reactions, she seems hurt that Pearl would even joke about splitting up the group. Marina starts tearing up, and Pearl makes a declaration: 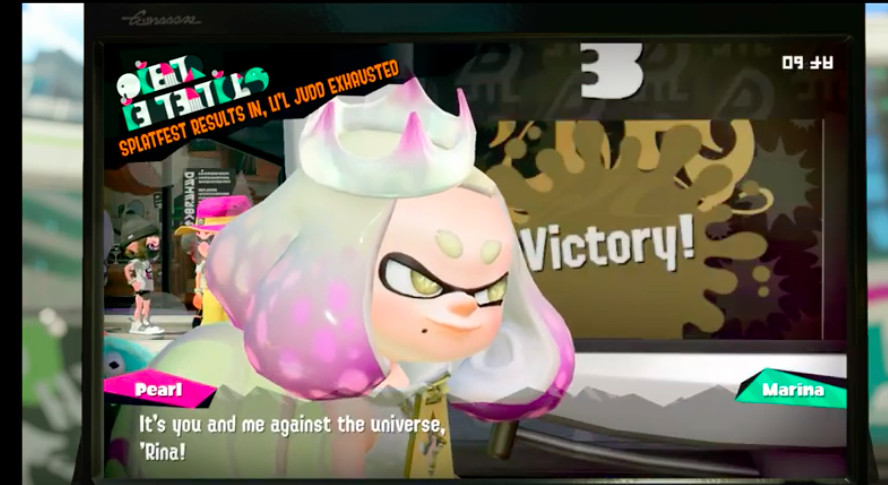 Fans also noted that in-game imagery made the two exchange their iconic items:

What you take from these series of events likely differs from person to person. I, for one, feel that the game was pushing for slightly more romantic interpretations — otherwise the fake-out wouldn’t work. I’m not the only one that feels this way. Many fans are proclaiming that Pearl and Marina are gay, if not pretending that the whole event was to celebrate their upcoming wedding.

The whole thing is vague, of course, which means that some people read the relationship between Pearl and Marina as friendship. I don’t think anyone is wrong here, but if people are flocking to ship the characters together, it’s probably precisely because it’s so wholesome. Nintendo really emphasizes how much the two care for reach other, and it’s something that has touched people. The emotional factor is huge here. Unlike the first Splatoon, I didn’t have nearly as much time to play the sequel — but when I booted up the final Splatfest, I found my heart aching. Has it really been two years? Damn.

There’s something about Splatoon 2’s approach to updates that help it stand apart from other service games. Yes, it’s a competition, but at the end of the day we’re dressing up and doing things like arguing about what condiment reigns supreme. Those are the sorts of conversations you have with friends. Pearl and Marina may just be fictional characters, but if you’ve been keeping up with Splatoon 2, it won’t feel that way. The two have been guiding our hands through the most exciting things Splatoon 2 has to offer. We’ve grown and changed alongside their concerts. Truthfully, I mostly participated in Splatfests just to see what Pearl and Marina would say to each other when the results came in. To be a Splatoon 2 player is to be invested in Pearl and Marina. I love them. They are everything.

Maybe they’re gay. Maybe they’re just friends. Whatever the case, Splatoon 2 fans can all agree on one thing: It’s sad to think big updates are coming to an end, and that we’ll have no more dialogue exchanges. At least we have plenty of fan art to tide us over until we see our favorite two knuckleheads again.