Creative – on a roll with its amazing Sound BlasterX amps and headphones – has just dropped something unusual: the Super X-Fi Amp – or the SXFI Amp, for short (See it on Creative’s site). What does it do? Well, you might want to sit down for this. The SXFI is a headphone amplifier for Android phones. You can also use it with Windows, Mac, and consoles as well, but first and foremost, this is a tiny dongle that sits between your Android phone and headphones or earbuds, designed to punch up everything you listen to, from games to movies to music. This isn’t something I had thought anyone needed. Then again, I didn’t predict Uber or cronuts, either. 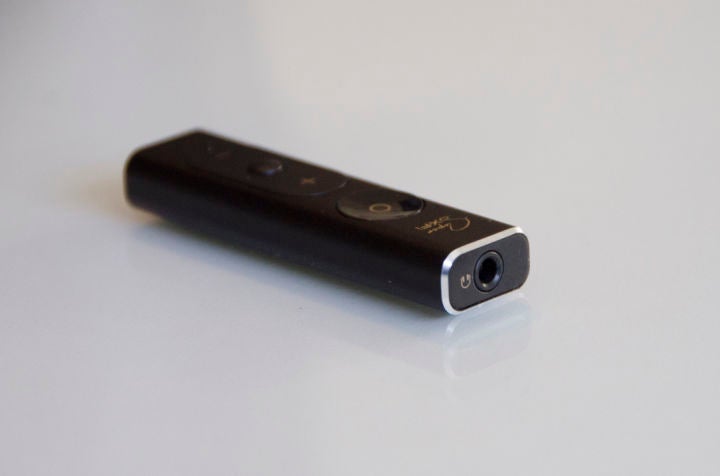 The dongle has a solid, machined-from-aluminum feel, and the buttons act like they’re not going anywhere anytime soon. The only thing that’s a little weird is the logo; “Super X-Fi” flows across the top with a crazy cursive-style script, mimicking the packaging’s copy that announces “Experience magical audio reality” in a similar font.

To be honest, neither the font nor the phrase “magical audio reality” instills much confidence. It’s the sort of thing I’d expect to see on a homeopathy bottle, or perhaps at CES from a vendor in the lobby who couldn’t afford to get onto the show floor. 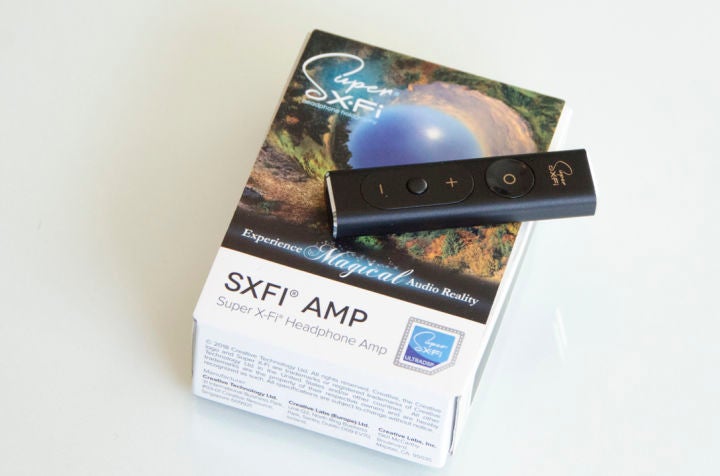 That said, I was anxious to see what the SXFI could do. To use it, you need to configure the app by photographing both ears and the front of your face. Your features need to be properly centered within guide marks in the app, and the app snaps the photo automatically when everything is lined up right. It’s more or less impossible to do this on your own, so enlist a friend who won’t make fun of you for photographing your ears.

After capturing the photos, you choose your headphones from a list. When I tested the app, it had about 55 headphones to choose from, though only about a dozen – all from Creative – are “Super X-FI Certified.”

It’s not clear what difference certification makes to the headphone profile, and if you can’t find your phones on the list – or something reasonably similar – you can choose generic headphones or earbuds as well.

At this point, all of these customizations are flashed to the SXFI, so even if you use the SXFI on another device, you’ll get the benefit of your customization. You can plug it into a PC (running Windows 10 Creators Update), Mac (MacOS 10.13), PS4, or Nintendo Switch.

Interestingly, it’s even possible to connect SXFI to an iPhone, but I don’t recommend it – it requires a convoluted workaround including plugging it into an iOS Camera Adapter – and even so, it’s glitchy. iPhone, SXFI is not meant for you.

Keep in mind that these settings are unique to your one-of-a-kind ears. You can create and store multiple profiles in the app, and switch amongst them whenever you want. Weirdly, though, you can’t rename these profiles, which are identified by the date created.

That means that if you and your spouse wanted to take turns using the SXFI, you’ll need to memorize the dates you created your profiles to switch between them, which is annoying. 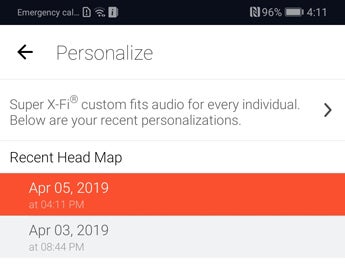 So why did we photograph our ears? That goes back to the concept of “computational audio” – Creative says that the company has mapped and analyzed thousands of ears to create sophisticated algorithms that create an optimal audio experience for every user. Creative extracts “hundreds of anthropometric parameters” based on just three photos, combines that with knowledge about the headphones you’re wearing, and then uses that information to simulate a large and warm soundstage.

So how does it work? Better than a Kit Kat bar with “magical” written in cursive has any right to. The moment you press the SXFI button and its little status light turns green, your Android audio world explodes outward, the soundstage expanding in every direction around you. At the risk of hyperbole, it’s like the moment The Wizard of Oz turns to color. And you can experience that rush over and over again, just by toggling the SXFI button on and off to your heart’s content.

The moment you press the SXFI button and its little status light turns green, your Android audio world explodes outward

I decided to ease in with Candy Crush, which I played with my trusty AKG Q701s. The AKG 701 was listed in the app, so I selected that. The game’s saccharine-sweet music ordinarily sounds like it’s being piped through a transistor radio, but tapping the SXFI button instantly transmogrified the music into something else entirely.

First of all, it made sounds seem like they were coming from further away – much further away, like out of speakers on the other side of the room, and speakers that surround you, at that. The sound is everywhere. But it’s more than that; the dynamic range opens up; the originally shrill and thin music becomes deeper, richer, and prettier.

It’s not a background element anymore; it’s something that is (and I hate myself for saying this) actually enjoyable to listen to. 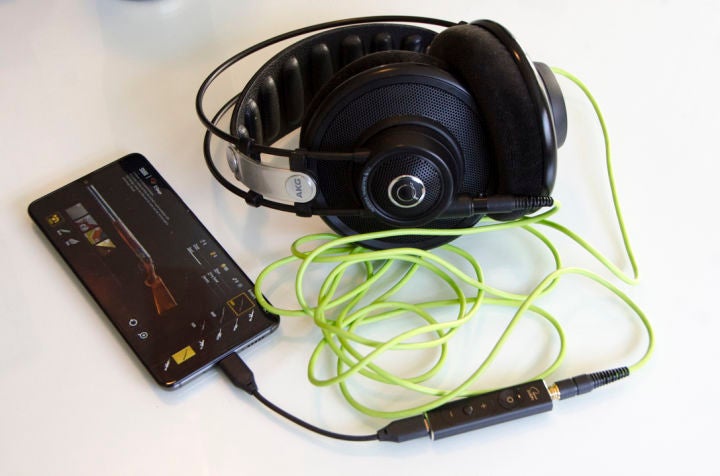 I repeated the experiment with other games and other headphones. I tapped in my Beyerdynamic Amiron headphones – they’re not in the list, so I identified them as Beyerdynamics DT880s instead. Perhaps for that reason, I actually preferred the sound of the AKGs, but let’s be clear: SXFI significantly improved the sound of every headphone I tried.

I even tested the stock earbuds that came with my Huawei Mate 20, and they sounded like a heavenly chorus compared to the ordinary industrial tone. I ran through a handful of games  – PUBG Mobile, Riptide, Minecraft, and a generic Galaga knockoff. Each and every one sounded amazing.

What works in games doesn’t translate to music and video.

The background music expands and lifts, but also game effects – blasts, pings, zaps, and explosions – sound fuller as well. Airplane engines are throatier. Even the wind is more dramatic. Every pew-pew has a weight that you simply don’t hear without the SXFI.

But music and movies prove to be SXFI’s Achilles Heel. Here’s the deal: At first, everything sounds awesome. I started playing The Beatles’ Dear Prudence, and initially thought that I liked the thicker sound that SXFI delivered. But it only took me a few moments to realize something was very wrong.

Paul’s crisp snare hits (yes, Paul’s – Ringo had quit the band, and John and Paul briefly pressed on without him) had disappeared into a wall of reverb thick enough to cut with a knife. And the vocals were so drenched in echo that it sounded like John was literally singing from inside a reverb tank.

Movie dialog was similarly unpleasant. Unfortunately, what works in games doesn’t translate to music and video. The dialog is so just too echoey.

The Creative Super X-Fi has an MSRP of $149.99 and includes a free set of $99 headphones at the time of this review. It’s also not compatible with all Android phones so consult the link directly below to see if yours will work or not. 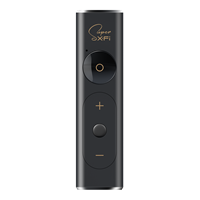 When it comes to games the Super X-Fi Amp is unexpectedly cool. It transforms mobile game audio into an event – something you want to hear – no matter what kind of headphones or earbuds you wear. Alas, it’s a one-trick pony so you’ll want to turn it off for everything else, which limits its value. After all, you’ve got to really want to hear a lush version of the Candy Crush song to spend $150 on the SXFI.