Deathgarden: Bloodharvest has a ridiculous name, but there’s a great game hiding beneath the surface. An overhaul and relaunch of 2018’s Deathgarden, Behaviour Interactive have added more characters, maps, and a new progression system to address original complaints and allow for future growth and content.

Deathgarden has the same DNA as Behaviour’s similar title, Dead by Daylight, where a powerful killer stalks a group of survivors. While Dead by Daylight is focused on slow, careful horror that occasionally spikes with a jump scare, Deathgarden is fast-paced and frantic. More than once, I would finish a round with my hands shaking and my heart pounding. This small early access game, which is available for PC for $15, is one of my biggest surprises of 2019 so far.

Each match has five Scavengers and one Hunter. The Hunter is invincible, equipped with powerful abilities, and packs an arsenal of weaponry. Scavengers are fast, hard to spot, capable of climbing terrain, and have unique abilities that help them evade and escape. The Scavengers have one ability and a small bow and arrow; they’re otherwise helpless. The Hunter is a first person shooter, the Scavengers have a third person view and few offensive capabilities.

The Scavengers have to wait out a timer; once it ends, they can escape through exits around the map. They can also collect blood and turn it in at pillars around the map. This is far riskier, but once 125 blood has been turned in, the end game triggers. The Hunter can also trigger an early end game by killing all Scavengers but one.

While blood pick-up and drop-off centers form the major objectives on the map, there are also detection drones, ammo crates, power cores, and even rare ‘golden crates’ which give unlimited resources to whoever claims it. 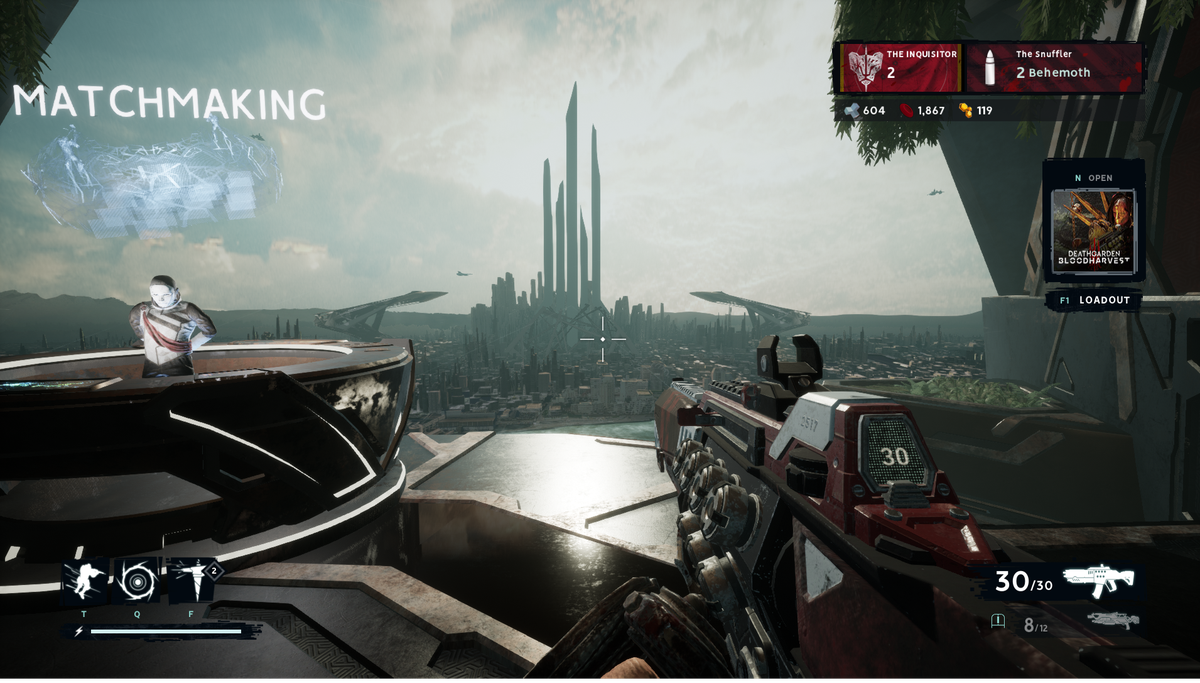 The main tension of Deathgarden comes from choices. Do I help a fellow Scavenger in trouble, or stay safe? As a Hunter, do I take advantage of supplies around the map for myself, or mark them so they’ll reveal Scavengers? Do I go for a golden crate spawn, or an objective? These little choices make up the tension of a 10-minute round, and keep things feeling fresh.

There are three in-game currencies: blood, gold, and iron, which upgrade and unlock characters. Currencies are awarded through in-game actions, like turning in Blood or using a Hunter’s abilities. These challenges encourage players to move through the map and interact with each other, setting up encounters and conflict. Even if I don’t escape, I may have completed a challenge to turn in blood in the first minute of a match, or gained a level by performing well. There’s a steady rhythm of numbers going up and little achievements being filled that form a cadence throughout every individual round. 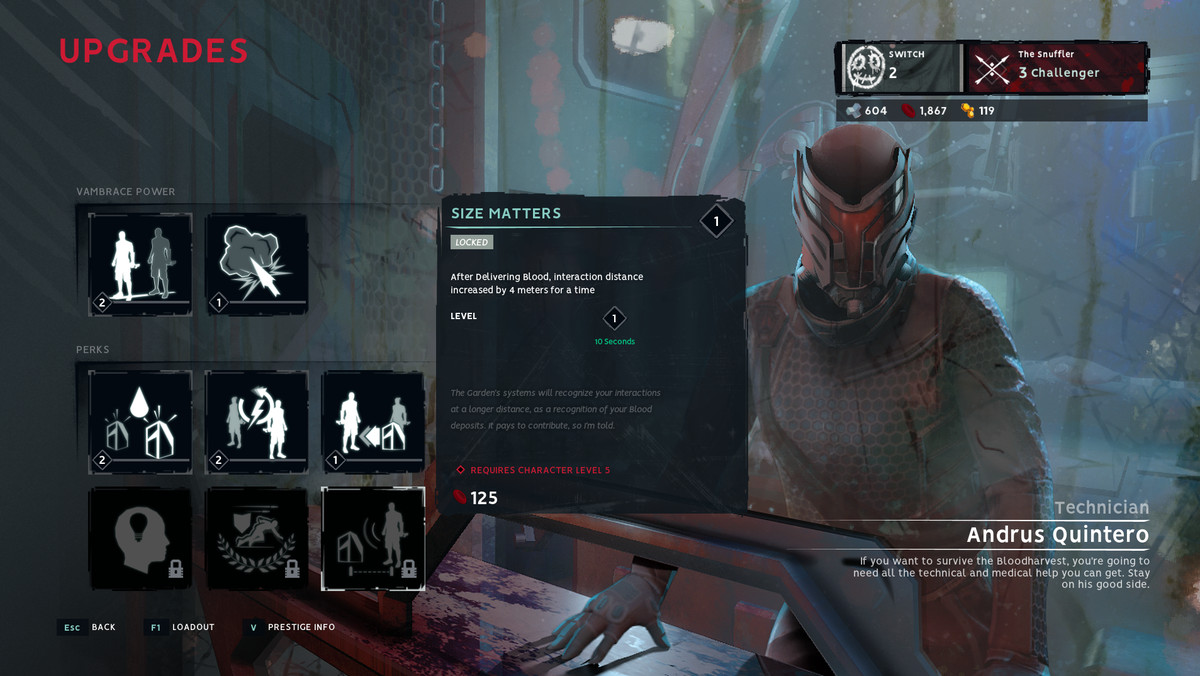 Queues are extremely quick, especially for those playing Hunters. Scavengers are easy to pick up; Hunters take a little more finesse. There’s simply more to manage and master, including an exo-suit speed boost, unique weapons and abilities, and tracking down survivors.

While it takes longer to figure out the Hunter, it’s fascinating to see the game’s dynamics flip. When I hear the sound prompt that means the Hunter has a Scavenger in their sights, I have two distinct reactions. As a Hunter, I grin and sprint forward towards my prey. As a Scavenger, I whisper ‘no no no no no,’ and try to keep calm. The Hunter is a power fantasy; the Scavenger is a bite-sized horror experience. It’s tough for an asymmetrical multiplayer experience to create unique roles that are also both interesting and fun, but Deathgarden pulls it off.

It’s also worth noting that the Hunter queue is instant, but the Scavenger queue is a little longer — about one to two minutes, depending on the time of day. This is a stark contrast to Dead by Daylight, whose killers may wait for some time until enough people willing to play survivors sign up. This is because, well, Scavengers are just more fun. Each Scavenger is a little parkour ninja, and it’s satisfying to sprint, climb, and slide away from a Hunter.

One issue is that occasionally, I’ll find myself outclassed. A Hunter who clearly knows the game top to bottom will hunt Scavengers down and incapacitate them, then let them rez, and down them again so that they can achieve their challenges. When I am matched against opponents of equal skill, or at least people in the same ballpark as me, I have a blast. When I’m put against a veteran of the game in a Terminator skin, it’s a little less fun. 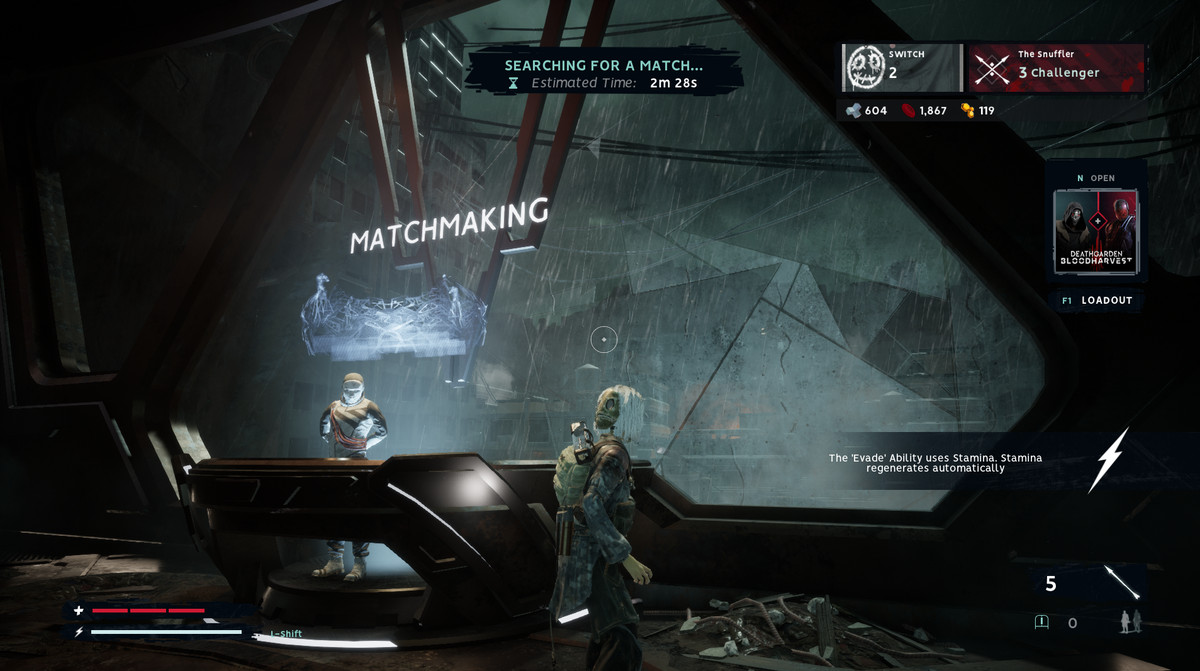 Deathgarden’s setting is Hunger Games combined with Judge Dredd. It’s an unrelentingly grim dystopia, where survivors try to get past the Bloodharvest so they can earn a spot in one of the rare, high class Enclaves that are left in the wreckage of civilization. The setting would make an excellent tabletop game, and it’s dripped out in lobby environments, sound bites, and character biographies. There are fanatical Inquisitors, Bloodharvest prison sentences, resistance cells, and a polite announcer who reminds you to water the Enclave society with your own blood.

Even the lobbies tell a story. The Hunter spawns in a lobby that looks out at a grand, shining Enclave. It looks like a city of the future, peaceful and inviting. Meanwhile, the Scavenger lobby looks out on a slum, with cracked pipes and broken windows. It’s a clever way to tell a story.

Unfortunately, that design doesn’t carry over into the maps themselves. Each map follows a pretty standard theme — rainy forest, dusty desert, vaguely industrial setting. In a world defined by excess and technology, it’s disappointing that we don’t see this extend into the Deathgarden itself. Every match, we see technology custom-build the map from scratch, and one of the Hunters is obsessed with the power of the forest … but the environment itself doesn’t reflect this imagination.

Deathgarden: Bloodharvest has a lot of potential, and I’ve been surprised at how much time I’ve dedicated to it since its launch. The trick will be ensuring that there’s gas in the tank to keep this relaunch going; it’s already faltered once, after all. This means that there’ll need to be a steady flow of new content, lest players find themselves resenting the grind of unlocking high level talents and cosmetics. The good news is that the world of Deathgarden allows for new content that could be fun and inventive. I’m looking forward to seeing this progress, even if I do continually forget which order the deadly nouns go in.

Deathgarden: Bloodharvest is currently available in early access for PC; a console release is expected before the end of 2019.