The Kaliber Gaming Fokus II gaming mouse is part of IOGear’s refresh of its gaming product line, which also includes the HVER PRO RGB mechanical gaming keyboard and Nukleus gaming headset. The Fokus II offers up RGB lighting, a high DPI range, and an ambidextrous design at $49.95 (See it on Amazon). That puts it in the category of mid-range gaming mice, and though it has the specs to keep up in that category, its overtly gamer-y design doesn’t help it. 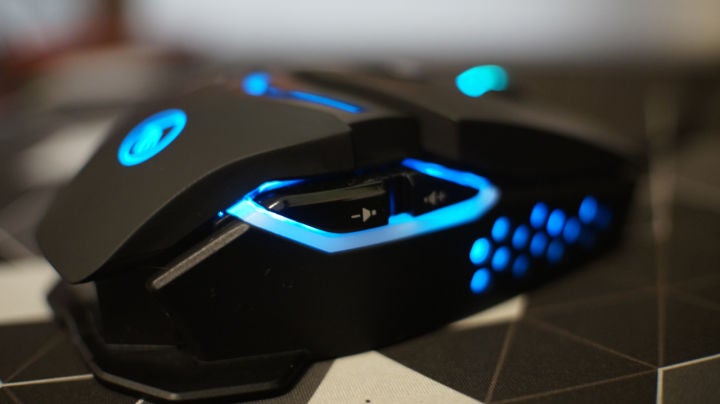 That sturdy feeling doesn’t extend to the side buttons, which are squishy, even if they hold up in the face of a tight squeeze. During testing I heard creaks every now and then, but I have no doubt this is a solid mouse.

Unfortunately, the points the Fokus II wins in strength it loses is comfort. The palm and primary mouse buttons are coated in soft touch material, which is a plus. But, that’s where the positive design touches end. 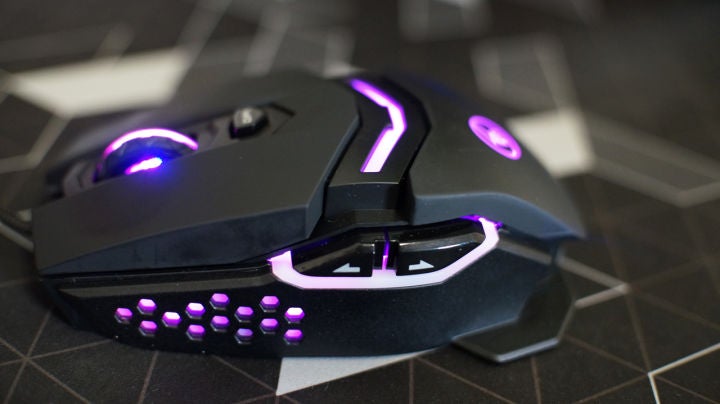 The Fokus II has a very angular design, and there are unwelcome angles right where my palm rests. It’s not so bad with a claw grip, but it still jabbed at the softer portions of my hand. And, since it’s ambidextrous, lefties and righties can both experience the hard angles sticking into their palms. I found it uncomfortable enough that I actually had a dream about trying to make it better by tearing pieces off of it.

Another side effect of the ambidextrous design is that there are thumb buttons on both sides. Back and Forward on the left side and Volume Up and Down on the right side. When held in my right-hand, the pinky-side buttons were too easy to accidentally hit, but not easy enough to intentionally hit.

Then there’s the RGB lighting. The colorful lighting shines through a number of zones: the Kaliber Gaming logo on the palm rest, a thin section between palm and main buttons, plastic bars underneath the side buttons, and 14 hexagonal cutouts on each side. The lights can be set to different brightness settings and can breathe or color shift. 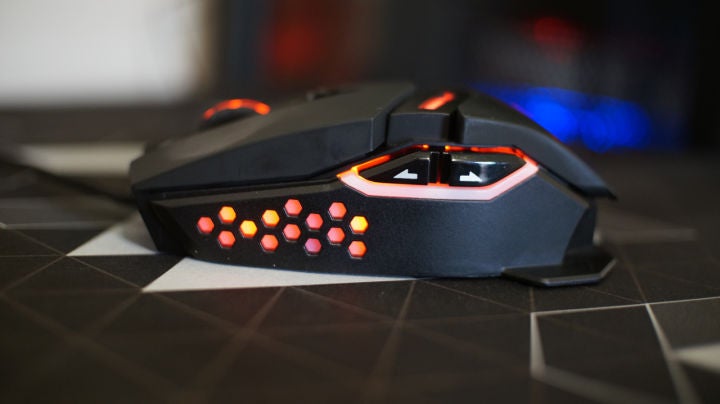 Though lights are coming out of many spots all over the mouse, the lighting only allows one zone of coloration, and it’s not terribly uniform. The sides, in particular, have lots of dim spots, and the scroll wheel light never seemed to exactly match the colors elsewhere. On the plus side, the Fokus II is built around a Pixart PMW-3360 sensor, which is a great sensor.

I was a little concerned installing the Fokus II’s software. Though I went to IOGear.com to get the software, it directed me to custhelp.com to actually download it. And, then to make matters worse, Windows flagged the software because it comes from an “unknown publisher.” I scanned it with Avira and Malwarebytes, then took a deep breath and went ahead. 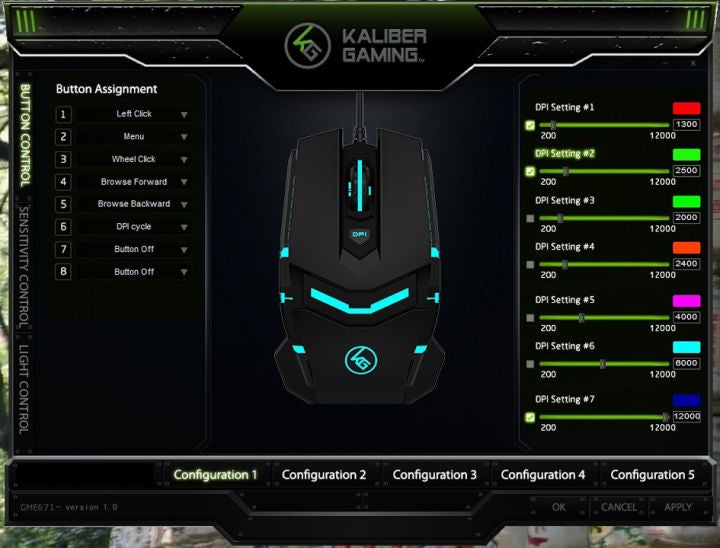 Despite my red flags, the software was fairly straightforward to use. It was easy to change the lighting and DPI settings and remap the buttons. There are seven available DPI presets, and they can be toggled on or off in case you know only want to cycle between a couple settings. My biggest priority was to disable the pinky-side buttons. And, once in the software, I noticed “Win Pointer Speed Acceleration” was on by default, so I switched it off.

I’ve used several mice with the Pixart PMW-3360 sensor, such as the Cooler Master MM520, MM530, and MM830 and was not surprised to see that, in the Fokus II, it continues to perform impeccably.

I played over a dozen hours of Apex Legends with this mouse, and I’ve played hundreds of hours of other games with the PMW-3360 sensor inside. The moral of the story is that my aim was just as on-point with the Fokus II as it was with any other mouse. Was I getting headshots all day? No, because I’m not that skilled. But, it’s clear the mouse can aim just as well as the gamer wielding it. 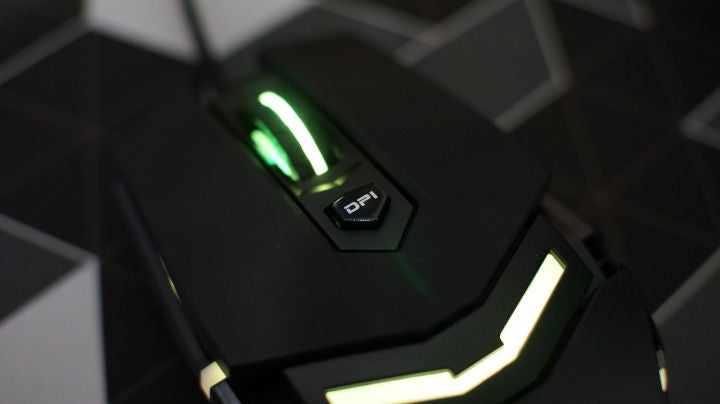 The Omron switches in the primary mouse buttons were also consistent, so my aiming and ability to shoot were both reliable on the Fokus II. The thumb buttons are fairly well placed, making it easy enough to roll onto them. The forward button is a little trickier, since it’s the squishier of the two. I had it set up to mark objects and enemies in Apex Legends, and I would often struggle to double-tap it successfully.

The scroll wheel has somewhat grippy rubber and notches, but they’re not very pronounced, so scrolling between a half-dozen weapons in Fortnite was harder than toggling between two in Apex Legends. It manages to do the job, though, and the middle click only takes a light press, making it handy for the heat-of-the-moment melee at the start of a match after I’ve immediately run out of shells in my Mozambique.

So, from a performance standpoint, the Fokus II can compete on a mostly even footing with similarly-priced mice from the big name companies. The only catch: those mice are much more comfortable to hold, with curvier designs instead of the hard angles IOGear put on the Fokus II.

The IOGear Kaliber Gaming Fokus II gaming mouse has an MSRP of $59.99 and is usually the same price online. 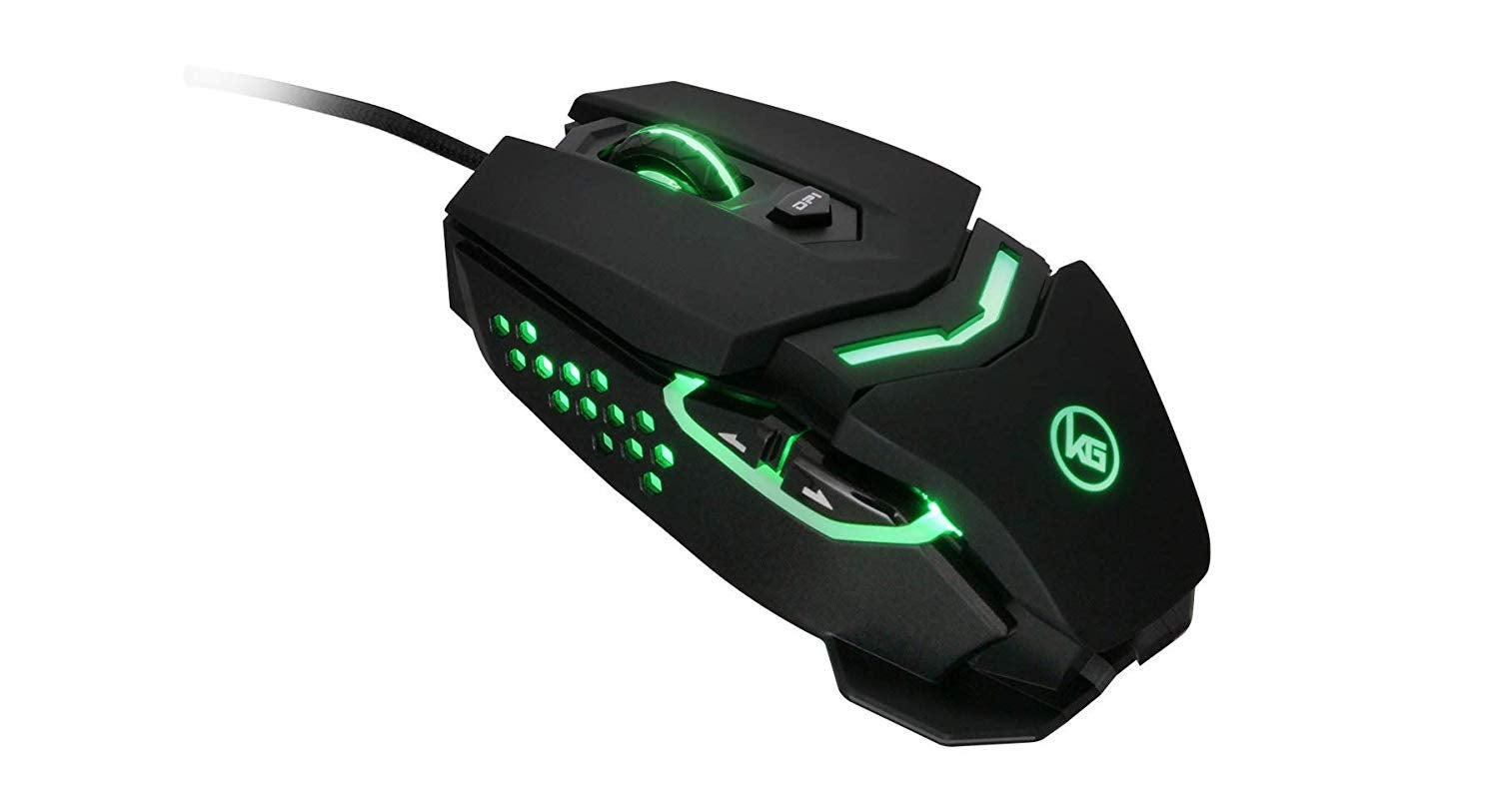 The Kaliber Gaming Fokus II mouse is as solid as they come, and it’s on par with other great mice when it comes to gaming performance. Its design sets it apart, but not in a good way. The lighting is too poorly executed, and its hard angles just aren’t comfortable.