Sea of Thieves is a fascinating game because so many factors are outside your control. If I see another ship on the horizon, there’s a surprisingly complex flow chart of factors that result in a decision to stand and fight, attempt to ally, or cut and run. With every encounter, I take part in this delicate social dance. That can be frustrating — if you want to fight or hunt players, and they want to placidly sail and go on adventures, there is a clash of expectations.

I have found the solution to this: a word that activates the primal urge in every Sea of Thieves player’s head to fight, kill, and die.

What am I supposed to do, just chase people down? Am I supposed to yell cusses in an attempt to provoke them? Should I accept that they don’t want to fight me, like some kind of coward? Look, I’m a pirate of honor. I’m not going to harass people or say anything rude. I’m also not going to run down some poor sloop. If they want to go about their business, I respect that.

But at the same time, sometimes I just want to fight! Maybe I want the sweet pink lantern flame that only comes from dying at the hands of another player. Or perhaps The Arena is too chaotic, too “on” for me. Or I might see the glimmer of treasure on their ship, and I want to acquire it. It became clear that I needed a siren’s song, a way that I could yell through my speaking horn and ensure that my prey would come to me.

I found the answer to my urgent need by accident. It all comes from a single word.

Know Your Meme defines “hewwo” as a “variation of ‘hello’ with a cutesy or babyish connotation.” The word grew into slang on Tumblr in 2017 through its use in shitposts. Arguably the most culturally prominent use of hewwo is in a text RP between two friends in which one person cannot stop hewwoing and pleading for their life, while the other friend, who assumes the guise of U.S. President Barack Obama, leaves them to their fate. 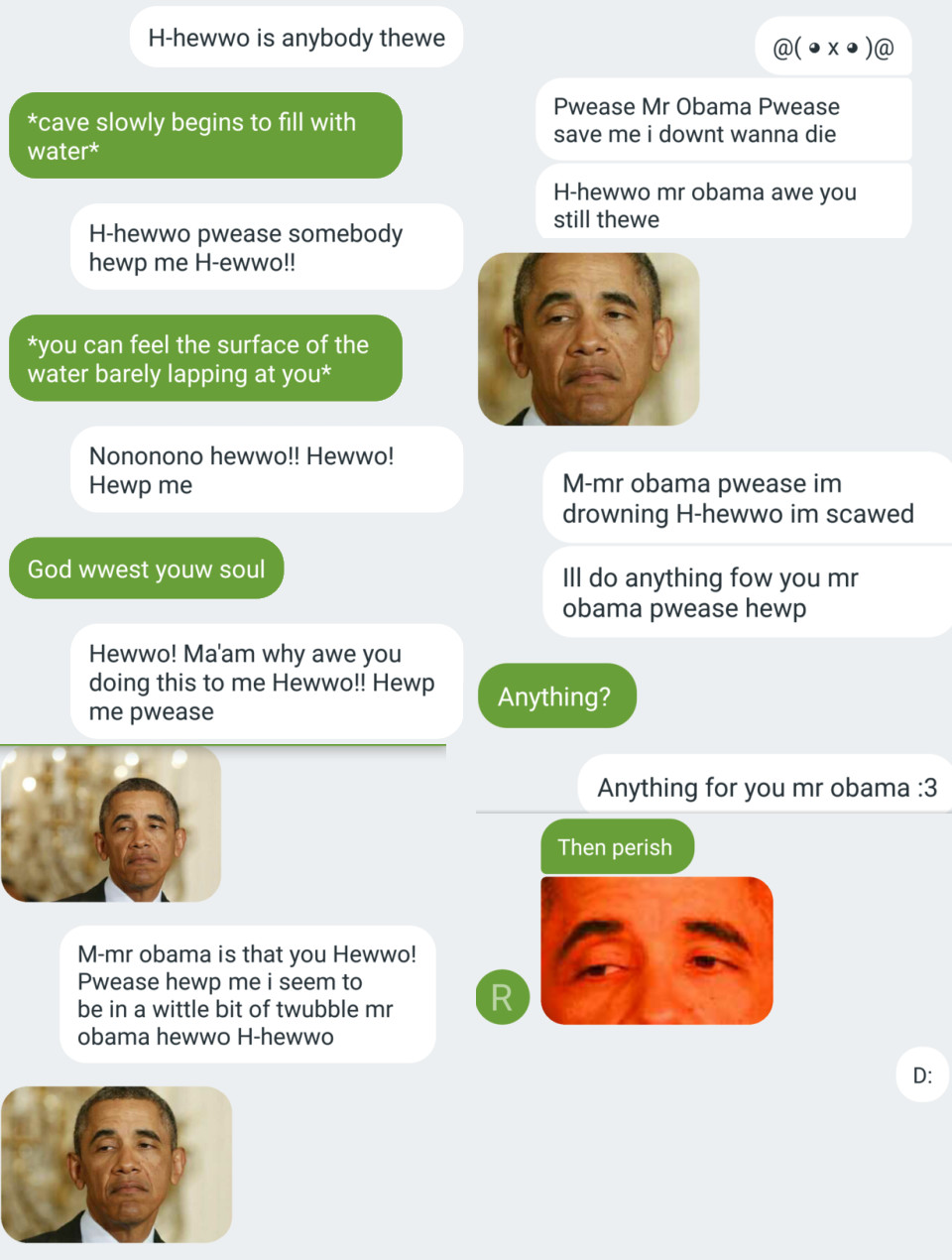 Sea of Thieves introduced a speaking horn in The Hungering Deep that allows players to project their voice across the ocean and communicate with other ships. At first I used the horn for its intended purpose, offering alliances or laying down the terms of a bargain. This absolutely pales to lifting the speaking horn to my lips, pressing my mouth close to my microphone, and shouting “H-HEWWO? MISTEW GAWWEON?”

What’s important to note is that I don’t say hewwo in a soft or sweet way. I am not trying to sing a lullaby that gently lulls my enemy to sleep. Instead, I demand their attention by putting equal emphasis on both the HEW (to get their attention) and then an even louder WO (so they know I’m not fucking around).

Update: After I shared a clip of my hewwo in Polygon Slack, my coworkers were split between white hot fury and triumphant ‘hewwo’ing. They have convinced me to upload an example so you can see it for yourself.

Nobody likes this! In 100 percent of the cases I hewwo at another ship, two things immediately happen.

Here’s the thing — there are many ways that I could pick fights with people. I’ve encountered players who were happy to insult my avatar, hurl slurs, roleplay extensively as a pirate over voice chat, try to sneak aboard my ship to drop my anchor, and try every trick in the book to get me to stop and fight them. None of these tactics are as effective as a HEWWO?! HEWWO!!

The entirety of the Sea of Thieves fanbase goes absolutely fucking wild when they hear a hewwo. I often roll with a galleon, with a full crew of friends. We adorn our ship with Pirate Legend cosmetics, signifying that we have spent a long time in the game. In most cases, this acts a powerful deterrent. Upon hewwoing, that dissipates. I’ve been attacked by understaffed galleons, solo sloops, brigantines loaded with valuable loot, and even rowboats.

When I play solo, I roll my red and white ship, with a bold scorpion sail. It makes me think back to the Russian parable of the frog and the scorpion, where the scorpion acquires passage across the river from a friendly frog. Part way through their journey, the scorpion sinks his stinger into the frog. “I cannot help it,” the scorpion says as they both drown. “It is my nature.”

When I hear that parable, I think “big mood.” 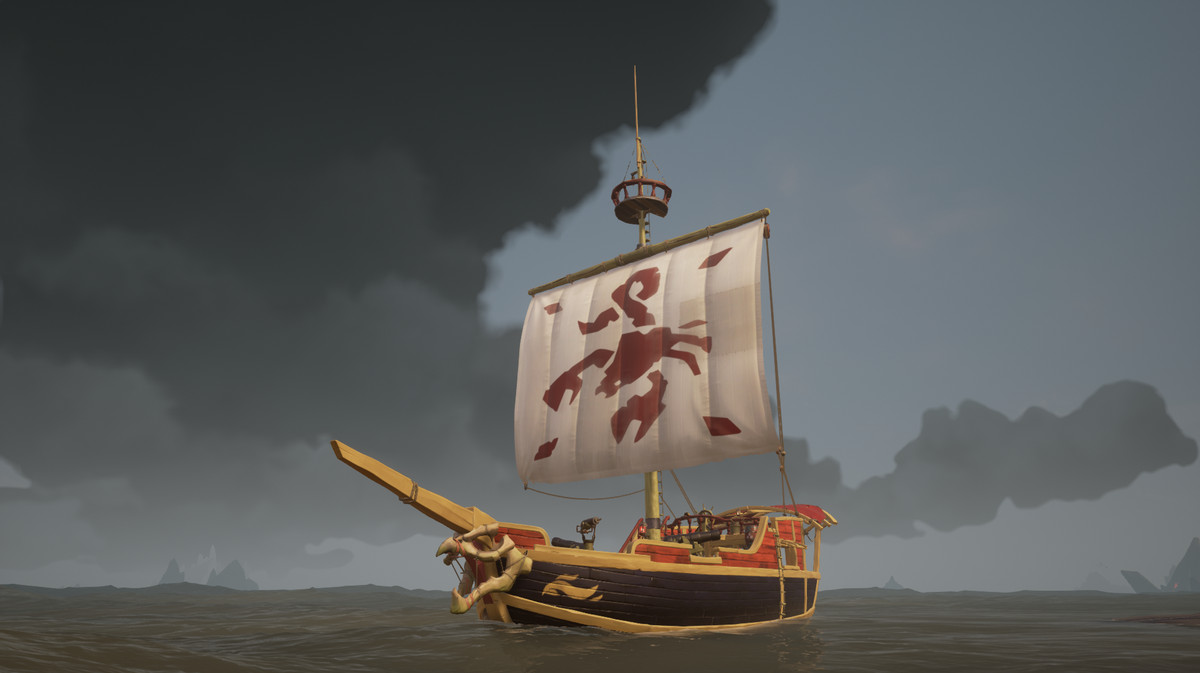 Not even my crew tolerates a sonorous “hewwo” over voice comms! On multiple occasions, they’ve voted me into the brig, knocked holes in the bottom of the ship, and left me to drown in a cage. On other occasions, they drink grog outside my cage, then vomit over me while shouting, “This is what you get! This is the price of a hewwo! Stop it! Stop hewwoing!”

So strong is their hatred that when I reached out to a crew member to ask him if he’d be willing to comment on this article, he flatly declined. Instead, he wrote back in a fast, frequent set of sentence fragments.

this could create a trend

Some people suggest that Sea of Thieves is a game lacking content. Instead, I’d argue that the game is full of experiences, but they’re ones that you have to craft yourself. Sometimes that content is centered around ghost ships, megalodons, and pirate adventures. Other times, that content is my crew immediately yelling at me as soon as I call that I see a ship on the horizon because they do not want me to hewwo when we have an Athena’s Chest aboard.

But there’s a secret that I need them to understand: I will never stop. And if you ever see a sloop on the Sea of Thieves with a white sail and red scorpion, please come to my ship. I promise it will be fine, and I will not take your treasure. You can trust me.