Stranger Things 3 debuted last week on Netflix, and in advance of the premiere, Microsoft began teasing something related to Windows 1.0. If those two things seem unconnected, well, Microsoft has connected them with Windows 1.11, a new app in the Microsoft Store that takes users back to 1985 — the year that Microsoft released the first version of Windows, and the year in which Stranger Things 3 takes place.

The Windows 1.11 app isn’t just a way to relive mid-1980s computing. It’s a version of Windows that has been infected by the Upside Down. Like Dustin, Lucas, and the rest of the gang from Hawkins, Indiana, you have to solve puzzles in an attempt to save the town from that realm’s foul beasts. (Note that the app only works on Windows 10 devices.)

While MS-DOS was a keyboard-based operating system with a command-line interface, Windows was Microsoft’s first OS with a graphical user interface, and it was designed to be used with a mouse in an era in which that wasn’t a common computing peripheral. So don’t worry — you can navigate the Windows 1.11 app with your mouse or trackpad, rather than by typing things like del UPSIDE_DOWN.EXE into the terminal. (Your mouse’s scroll wheel, however, will not function in the app.) 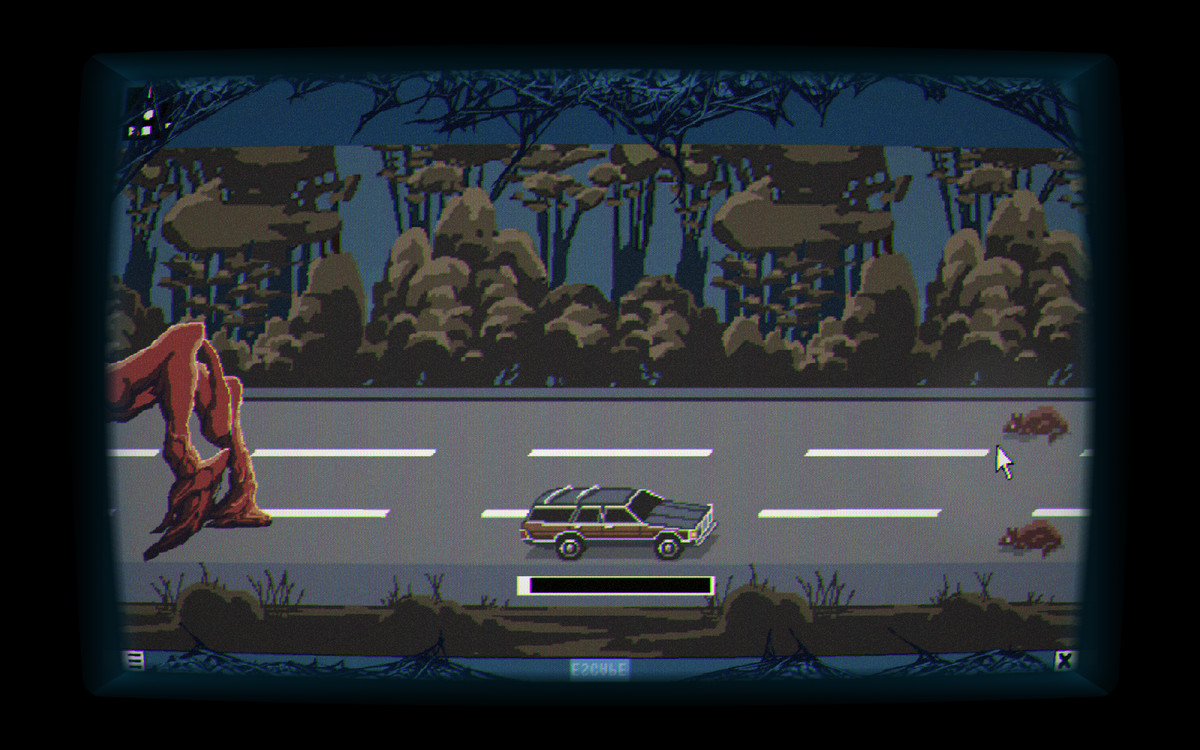 Don’t let the monster catch you!
Image: Microsoft via Polygon

You’ll find a bunch of fun 1980s-era puzzles and video games in the Windows 1.11 app. One is a MUD-inspired game in which you have to navigate Steve through some dungeons to collect Russian intelligence documents (while avoiding Russian agents … or hitting them with hair spray). Another is a side-scrolling driving game in which a monster is chasing your wood-paneled station wagon.

It works as an adventure game where you complete certain elements of the experience to unlock new paths and puzzles. Along the way, you’ll be rewarded with clips from Stranger Things 3. (Out of context from the show, they don’t feel particularly spoilery to me, as someone who hasn’t started watching the third season.) Is it basically a giant retro ad for one of Netflix’s biggest shows of 2019? Yes. But as marketing tie-ins go, it’s a well-executed one — and fun, to boot.

Microsoft’s partnership with Netflix for Stranger Things 3 doesn’t end with Windows 1.11. The tech company is bringing Camp Know Where — Dustin’s nerdy summer camp — to life in Microsoft Store locations around the U.S., Canada, Australia, and the U.K. starting July 20. Students age 13 and up can register online for two free STEM workshops that are “integrated with technology themes from the show and its characters,” according to Microsoft.