Following Sony’s first State of Play, IGN had a chance to go hands-on with many of the upcoming games in the PlayStation VR library teased during the showcase. We came away impressed with a host of experiences that let you travel to distance planets, care for a falcon, and let you live out your heist movie dreams.

Read on for our previews of several highly anticipated PlayStation VR games set for release in 2019, and if you want a detailed breakdown of our thoughts on one in particular, be sure to read our full Marvel’s iron Man VR preview.

Blood & Truth is a first person, VR-driven series of briskly interconnected, fast-paced vignettes that string together to feel like a schlocky but fun-as-hell b-tier action movie. If you bought a PSVR at launch, you might remember Sony London Studios’ original offering “The London Heist” which shipped on the PlayStation VR Worlds demo disc. Blood & Truth plays like a more ramped up version of London Heist, and the demo we played this week promises to be just a small slice of a much bigger game when it launches for PSVR in late May.

At its core, Blood & Truth is a first-person shooter. You’ll run across rooftops gunning down thugs, blow open doors with explosives, take out a warehouse full of criminals, and survive a high-speed car chase, to name a few. In typical VR fashion, though, it’s not just the frantic, video-gamey stuff that’s super fun to execute; VR manages to also make seemingly mundane things like picking a lock, opening a car’s glove compartment or flinging a clipboard across the room totally interesting, too. One of my favorite moments in the demo was sitting shotgun alongside my in-game partner and firing at bad guys as we drove and bantered, like some sort of vintage buddy cop movie. It made me want an entire PSVR game centered around two friends on a road trip.

The controls were tight, for the most part. Aiming and shooting felt great, as did reloading my gun (by motioning to push a clip from my left hand into the bottom of the gun in my right hand) as well as strafing, pushing forward through the games’ increasingly chaotic set pieces, and holstering my weapons when things calmed down. Only when I ended up dual wielding a handgun and a submachine gun during a highspeed car chase – and subsequently struggled to reload either gun without a free hand – did things get a bit cumbersome, but that was probably entirely my own fault for being ambitious.

I’m not sure how long the final version of the game will be, but a two to three-hour movie-length story would be perfect here, especially if players were nudged to replay the campaign to improve their scores and nab collectibles. We’ll know soon enough, but in the meantime, I’m really happy that PSVR continues to get big, bold exclusives like Blood & Truth, these many years into its lifecycle. — Brian Altano

Announced just a few days ago in the first State of Play, Sony’s upcoming artistic adventure will let players actually try their hand in a VR mode, which includes both a guided experience and a free paint.

Armed with a notebook serving as a palette and a magic wand, I painted a gorgeous hilly landscape with beautiful but crooked trees and dotted stars throughout the sky as a genie guided me along in one of the VR mode’s campaign levels. As someone who can’t draw more than a stick figure, and a bad one at that, I feared I would be bad at Concrete Genie’s VR mode, but, by giving players specific items to paint, and a world that smartly interprets player movements to real-world design, I was pleased with my work.

There’s definitely some limit to what each element can produce in the world, but I quite enjoyed the amount of freedom I had in populating a clearing with trees, a campfire, and plants that would sway in the wind. Shifts of your wrist can bend and shape trees, while the swirl and flick of the paintbrush can send a breeze brushing through the grass, blowing petals off of flowers, much to the delight of the genie accompanying you

I’m excited to see more of the work you can do in this VR mode, and if the limitations needed to make every player feel like they’re making something beautiful might hold back the full capabilities of expression. It’s a smart translation of what Concrete Genie’s main, non-VR campaign is endeavoring to do with art and expression. But above all, the VR mode of Concrete Genie set itself apart because of how peaceful of an experience it provided. Amidst a loud, bustling preview event, I painted in a pleasant, serene, and calming environment — something not too many games try or can do, but I really appreciated how well Concrete Genie pulled it off. — Jonathon Dornbush 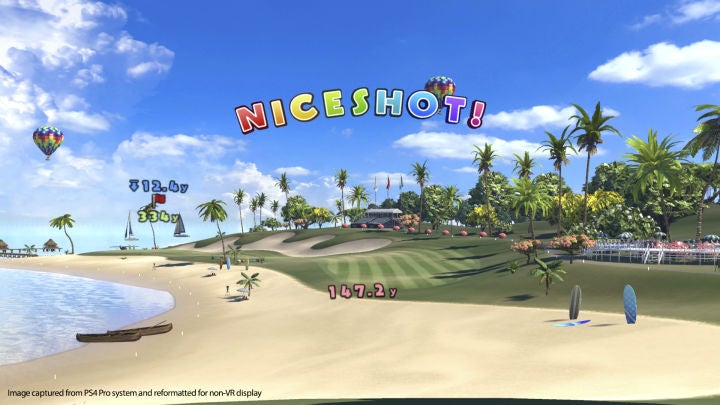 Being a newly recent pet owner myself, playing Falcon Age initially proved difficult. Not because of any issues with the game, but because I so immediately became attached to my falcon companion, and having to pull needles out of it mid-combat made my heart hurt me more than I expected.

But Falcon Age is a lot more than a falcon caring simulator. Yes, it’s as delightful to give your birb a skateboard or a top hat, but there is a deeper layer of exploration and combat than I expected. I played through a bit of the game in which I was trying to overtake an output from robotic rule, requiring a bit of stealth and intriguing combat. Outerloop Games has smartly tied your falcon into fighting, so I had to strategically subdue specific enemies, or disable certain machines, so that my falcon could swoop in and help save the day. (Outerloop has included an option to allow players to completely ignore combat, however, and let players explore the world without having to engage if that’s not of interest to them.)

The strategy involved there proved fun to work my way through, systematically freeing a spot of land and also getting to really enjoy knocking the hell out of a couple robots. (Your character is armed with a weapon that doubles as an electric whip and a club, while your bird primarily acts as a ranged attack.)

I really enjoyed my small slice of time with Falcon Age, and I can’t wait to see how Outerloop’s exploration of colonization, and bird care, plays out beyond the confines of my demo. I came away particularly impressed by Outerloop’s commitment to letting players choose how they want to play, beyond that combat/no combat choice. The full experience can be played in or out of VR, and in VR, additions like the ability to teleport while moving but also re-angle your view each time you land are welcome touches to an already intriguing adventure. Plus, I really just want to spend more time dressing up my falcon — Jonathon Dornbush

Playing Marvel’s Iron Man VR is a bit like being Stark in the first MCU Iron Man film. As I got the hang of the velocity of my palm thrusters and how to arc my trajectory in the air, I overshot my landing point an embarrassing number of times, pushed myself in the wrong direction a couple of times, and crashed into some walls, thankfully without any of the injuries Tony would actually suffer. — Jonathon Dornbush

For more, be sure to read our full Marvel’s Iron Man VR preview.

No Man’s Sky has always been about exploration for me, and in the 30 or so minutes I was given with VR, I was completely blown away by what I was shown. Instantly, the size and scale of the various plants and rocks, and even my ship left me absolutely floored. The flora, in particular, is what immediately stood out. The galactic vegetation was already sprawling, but now, it seemed almost skyscraper-sized. What were once fairly big rocks now stood as mountains in front of me. And that’s where it hit me: I’ve always felt compelled to explore new planets, but now I wanted to see absolutely everything.

If you’re familiar with the VR headsets that are currently available, you’ll feel right at home. Reaching behind my back to grip and then pull out my multi-tool felt good, and the shooting felt even better. Right away, I ran up to an array of rocks and started wildly blasting them. About halfway through my wild shooting, I decided to turn my gun sideways, kill shot style, and was delighted to see my on-screen weapon do the same. With my left hand, I was instructed to grip the controller to melee resources. Not only did it seem to work great, but I also instinctively started melee-ing rocks while still blasting them with the multi-tool to harvest even faster, to which I was told that no one at their development studio had yet to try. And much to my satisfaction, it totally worked. It’s options like these that I can’t wait to explore further. — Mark Medina

Though Rick & Morty co-creator Justin Roiland has been closely involved with a number of virtual reality games, Trover Saves The Universe is the first title to be completely developed by his studio, Squanch games, and it feels the most ambitious and intentionally made for VR.

For more PSVR coverage, be sure to stay tuned to IGN, and subscribe to IGN’s weekly PlayStation show, Podcast Beyond!, if you haven’t already for a more detailed breakdown of our hands-on experience.

Jonathon Dornbush is IGN’s News Editor, PlayStation lead, and Beyond! host. Talk to him on Twitter @jmdornbush.