Bloodstained: Ritual of the Night is a side scrolling adventure game from Koji Igarashi, best known for his similar work, Castlevania: Symphony of the Night. Like its predecessor, Bloodstained features dozens of winding rooms to explore, filled with a host of enemies, items, and secrets.

If you’re new to this style of game or just need some tips to get started, Polygon’s Bloodstained: Ritual of the Night beginner’s guide will help you make it through the night.

How to get an overpowered weapon in the early game

You’ll find dozens of weapons throughout your time in Bloodstained, but you can purchase your pick of strong weapons early in the game.

Once you’ve gone through the game’s intro and you’ve set up shop with Johannes in the town of Arvantville, you’ll eventually make your way to the game’s main castle. To get there, you’ll have to run through the town and make your way across a bridge. Once you’re at the bridge, you have to lower its drawbridge to access the castle. Before you do that, take a detour under the bridge.

Once you’ve dropped under the bridge, head all the way to the left. There you’ll find a chest behind a secret wall containing an 8-bit coin. You can use these coins to buy rare items in the game’s shops, like the one Johannes runs. 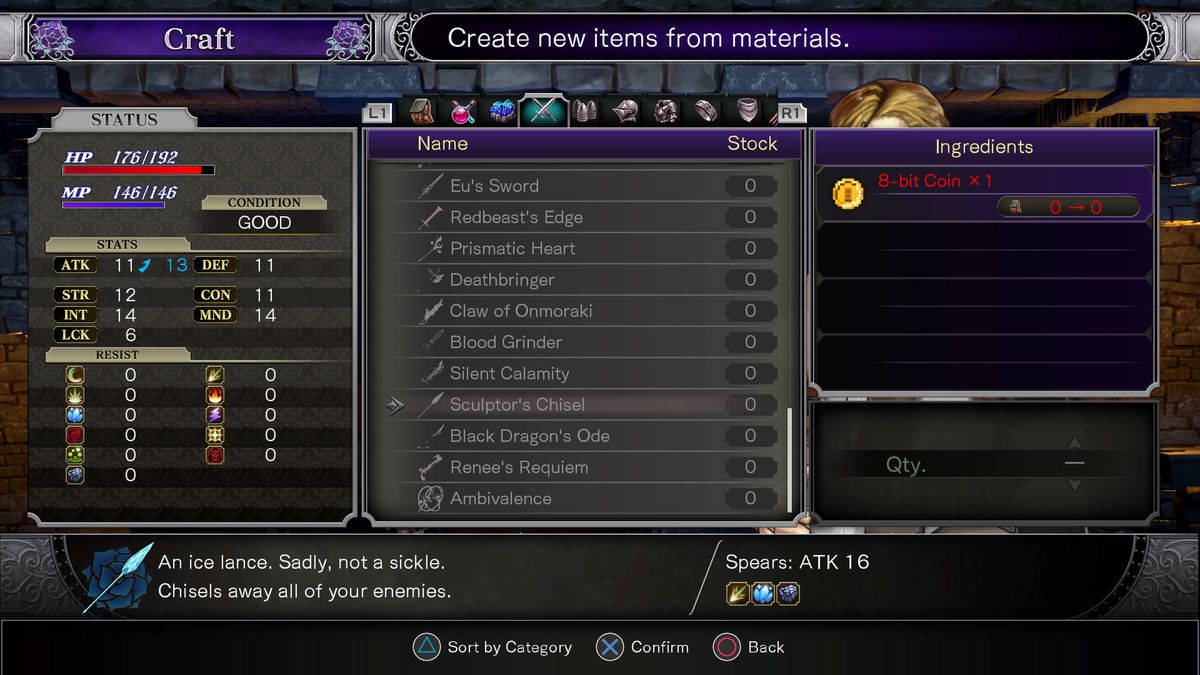 Most of these weapons are clever puns
ArtPlay/505 Games

Once you’re back at his shop, scroll to the bottom of Johannes’ weapon inventory to see the powerful weapons you can buy. Keep in mind that 8-bit coins are a limited resource, so choose wisely. Also, these aren’t the strongest weapons in the game, but they are great to use at the beginning.

There’s no definitive recommendation on what to choose here. However, we suggest figuring out what weapon types you like first before you drop a coin on one of these overpowered weapons.

Which shard to farm early

Bloodstained’s enemies aren’t just there for you to fight your way through. Most of them give you access to shards that power up Miriam. Shards have different effects, and some of them offer passive buffs or allow you to do special attacks. While these randomly pop out of defeated enemies, the more you collect of each shard, the more powerful they become. You can also level them up at Johannes’s shop, but gathering them naturally is a simple way to strengthen your arsenal.

With dozens of shards to choose from, its hard to decide which to stick to. Thankfully one of the best and easiest to farm shards is available early in the game. 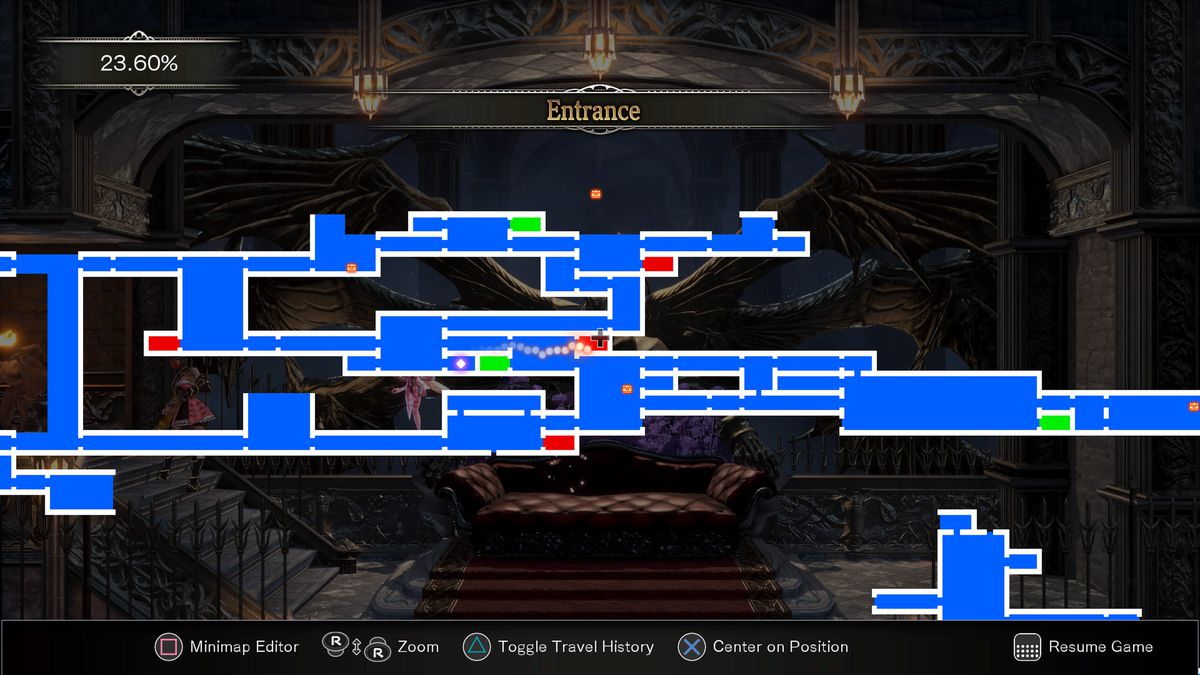 This arrow slinging enemy appears at various locations at the beginning of the game, but their most important locale is situated right next to save point in the entrance of the castle. This is the best spot to farm its shard since you can attack it using its unique attack, killing it in a single hit, and once you run out of magic points, you can turn around, activate the save point to refill your magic points, walk out the room, and kill it again.

In a few minutes, you’ll be able to get your True Arrow shard’s grade up a few levels with little effort (we were able to get it up to its fifth rank pretty quickly). While you may find other shard attacks you like more, this is one of the heaviest hitting you can get in the opening hours of the game — and it’s one of the easiest to power up.

The world of Bloodstained is large and twisting. You’ll find yourself running all over the map, backtracking when you get new abilities, and naturally, getting lost while you figure out where to go next. You might get frustrated if you’re not sure where to go. Thankfully, one of the game’s non-player characters will offer up pretty straightforward hints if you talk to her.

Once you’ve set up your home base in Arvantville, you’ll be able to visit Dominique, the exorcist who you meet when you land in town. While she offers up her own wares at her shop, she’ll also give you hints on where to go next after you beat one of the castle’s first bosses, Zangetsu. 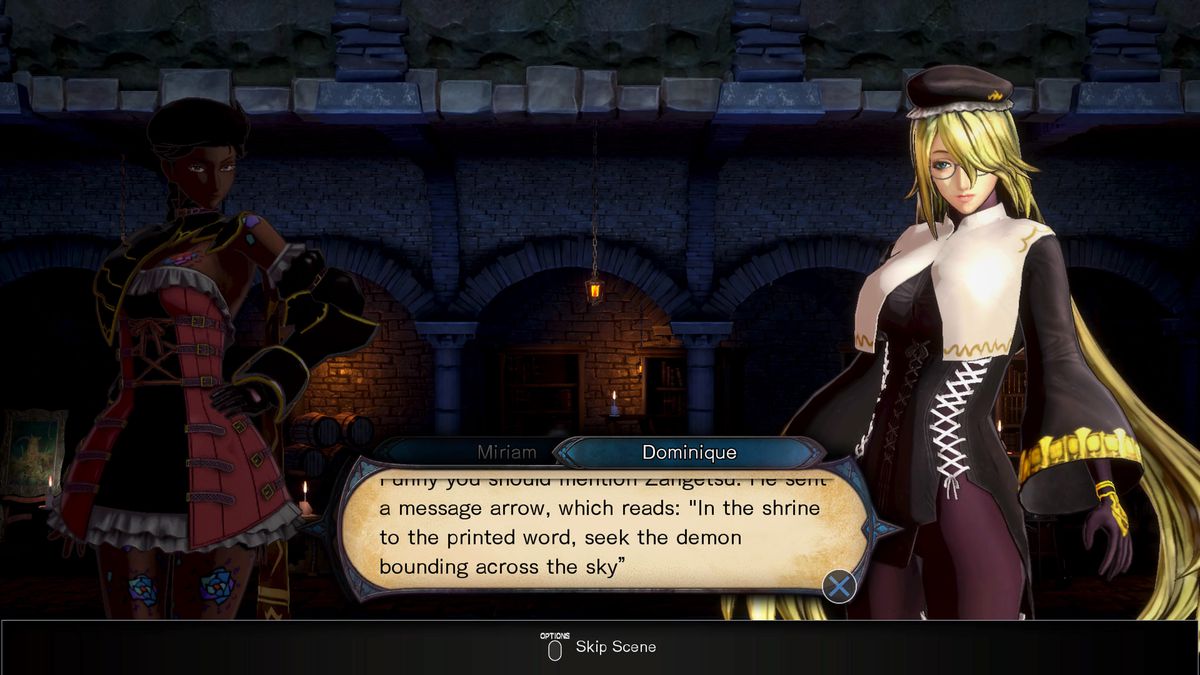 After that encounter, she’ll mention his journey throughout the castle. In discussing his whereabouts, Dominique will tell you how he’s passed through areas you initially cannot move through. Her clues usually pinpoint the location of a boss in different areas. For instance, when you’re on the hunt for the double jump, she’ll mention, “the shrine to the printed word,” which would be the library, Livre Ex Machina.

If you ever find yourself of unsure how to progress further, speak to Dominique. Her clues might allude to a place you haven’t visited yet, but as long as you keep her clue in mind, you’ll known you need to hunt for a boss in whatever place she is referencing.