The biggest news at this year’s E3 came from CD Projekt Red. Fans learned that Cyberpunk 2077, the company’s futuristic role-playing game, would arrive on April 16, 2020, for PlayStation 4, Windows PC, and Xbox One. They also learned that actor Keanu Reeves would be playing the iconic role of Johnny Silverhand.

But, in addition to all the information gleaned from the game’s new trailer, Polygon was also able to sit down with members of the development team for a series of in-person interviews. Here’s 10 more things we learned about Cyberpunk 2077 at E3 2019.

The Cyberpunk franchise has a single, unified timeline.

Mike Pondsmith, the creator of the original Cyberpunk 2020 tabletop role-playing game, was on hand at this year’s E3 in Los Angeles. He tells Polygon that he’s been working very closely with CD Projekt since the release of The Witcher 2: Assassins of Kings way back in 2011. Since then, they’ve been creating a single, unified timeline for the entire franchise. That means Cyberpunk 2077 will be a direct sequel to Cyberpunk 2020. 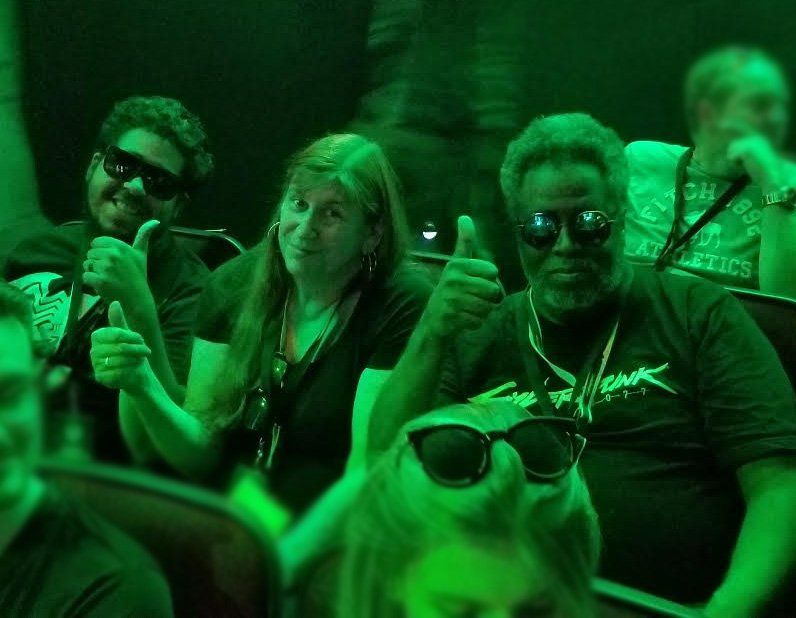 Cody, Lisa, and Mike Pondsmith in the audience before the Xbox E3 press conference at E3 2019.
R. Talsorian Games

In addition to his work on TTRPGs, Pondsmith is also an old hand at video games. His credits include work on the Halo franchise, but also MechCommander 2, Crimson Skies: High Road to Revenge, and The Matrix Online. He says that makes him extremely valuable to the team in Poland.

“I know how to answer questions in ways that are useful to everybody,” Pondsmith says.

But CD Projekt is also feeding back into Pondsmith’s own work at R. Talsorian Games, which still publishes books for the Cyberpunk universe. The end result will be Cyberpunk Red, the latest edition of the TTRPG. A quick start version will be available for fans at this year’s Gen Con, the nation’s largest tabletop gaming convention, this August in Indianapolis.

Pondsmith says his team has gone to great lengths to do the original material justice. That includes creating a database of over 18,000 non-player characters that have appeared in the TTRPG over the years.

Johnny Silverhand is dead … sort of.

In the larger Cyberpunk fiction, Rockerboy Johnny Silverhand died in a gun battle in 2022. That, plus the fact the Cyberpunk 2077 takes place 55 years later, means that Keanu Reeves’ character is likely quite dead when CD Projekt’s video game begins.

But that won’t stop Johnny from playing a big role in the game, where he appears to the player character as a sort of computer-generated ghost. Quest director Mateusz Tomaszkiewicz calls him a “digitalized personality construct.”

Just don’t expect to open a secret door later in the game and shake hands with him. 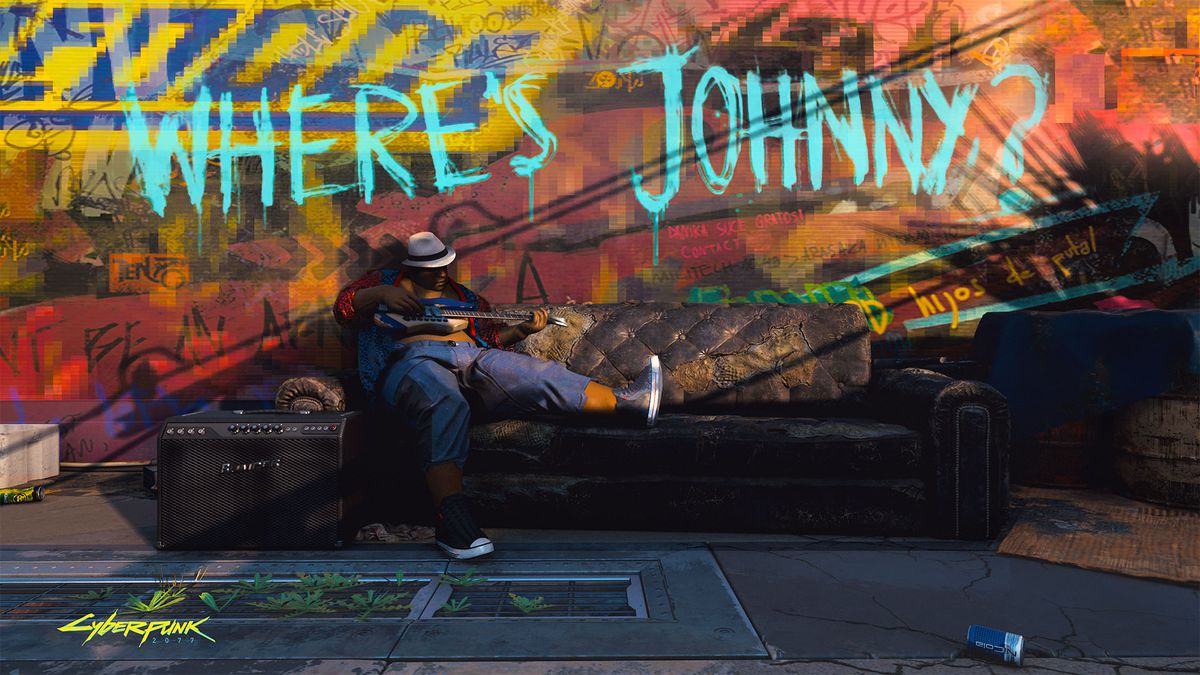 When Pondsmith was creating the original tabletop game back in the 1980s, Keanu Reeves wasn’t part of the entertainment landscape. In fact, Pondsmith says he had a completely different person in mind when he was creating Johnny Silverhand.

Since Bowie passed away in 2016, he wasn’t an option this time around. But, Pondsmith says, Reeves expresses different parts of the Johnny Silverhand character that the iconic rockstar simply wouldn’t have been capable of.

“Bowie had the kind of distanced vibe — that ‘I’m not really here for you, but I’m here,’” Pondsmith says. “What Reeves has is this utterly internal side, where you don’t really know what he’s thinking because it is very, very calm and internal. Kind of meditating yourself to total alpha zen. So, they’re two sides of the same coin.”

Night City has changed in the last five decades.

In this year’s demo, we met Night City’s Voodoo Boys faction, a group of Haitian spiritualists who help keep the peace in the city’s Pacifica neighborhood. I previously noted that the Voodoo Boys appeared to have been subtly altered from the original faction first introduced in 1988. As it turns out, it’s much more complicated than that.

The modern Voodoo Boys are a product of their circumstances. They live in the remains of Pacifica, originally a high-rent resort community for Night City’s upper class. That kind of construction could have been monumentally expensive, had the corporations not imported inexpensive labor from overseas.

“Thousands were brought from Haiti by the corporations as a cheap labor force to build Pacifica,” says quest director Tomaszkiewicz. “But now they’re trapped here. Haiti, in the timeline of our game, was ravaged by natural disasters, catastrophes, tsunamis, and so on. So they are quite desperate, so to speak. They have nowhere to return to.” 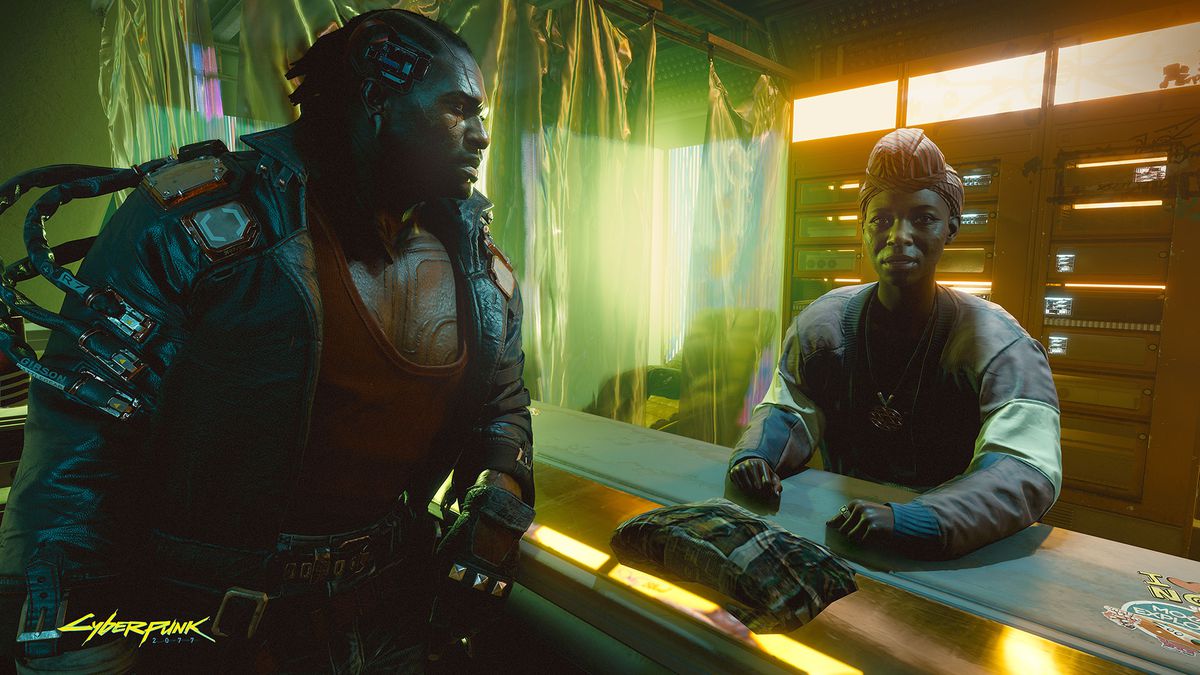 The descendants of these Haitian laborers are a people without a country. After Pacifica was built out, an economic crisis forced the corporations to abandon it. Now the workers who built it live there as squatters, making do inside the neighborhood’s remains. It’s the other residents of Night City who applied the “Voodoo Boys” moniker to this existing Haitian population.

“They decided to stay and carve out a district for themselves, and make a place for themselves and take care of their community there,” Tomaszkiewicz continues. “The reason why they are called Voodoo Boys is not because they chose to call themselves that. It’s more of the case that the people of Night City are kind of prejudiced against them. It’s this huge amount of people that came into the city, they are kind of squatting in this district. […] They perceive them as these people that have invaded their city. This helps us to build up the idea that the city is this oppressive system that treats people really badly, that when they are no longer needed just tosses them aside.”

Cyberspace is fractured in 2077.

In the original Cyberpunk 2020, Cyberspace was a place you could visit, where you could travel from one computer to the next on a massive, global network. In the year 2077, all that has changed.

“At one point in the timeline between 2020 and 2077, there was this catastrophic event where a legendary Netrunner [a kind of hacker] released a number of malware and rogue AIs into Cyberspace,” Tomaszkiewicz says. “This caused a global crisis, and made Cyberspace basically unusable for normal users and for the corporations.”

That crisis was mitigated with the help of the Netwatch, a kind of Cyberspace police force. Rather than disabling the malware and killing off the rogue AI, the Netwatch simply put up a massive cordon around the area to keep people out. That cordon is called the Blackwall, and a major plot point in Cyberpunk 2077 will have players trying to break through that wall to find out what lives on the other side.

As a result, though, the world of Night City itself doesn’t have the same kind of internet connectivity that you and I enjoy today.

“Most normal users only have access to local networks,” Tomaszkiewicz says. “You need to find an access point to connect to it in order to hack different devices on that network. However, Cyberspace still exists behind the Blackwall, and only the bravest and most skilled Netrunners attempt to get there. However, none of them return.” 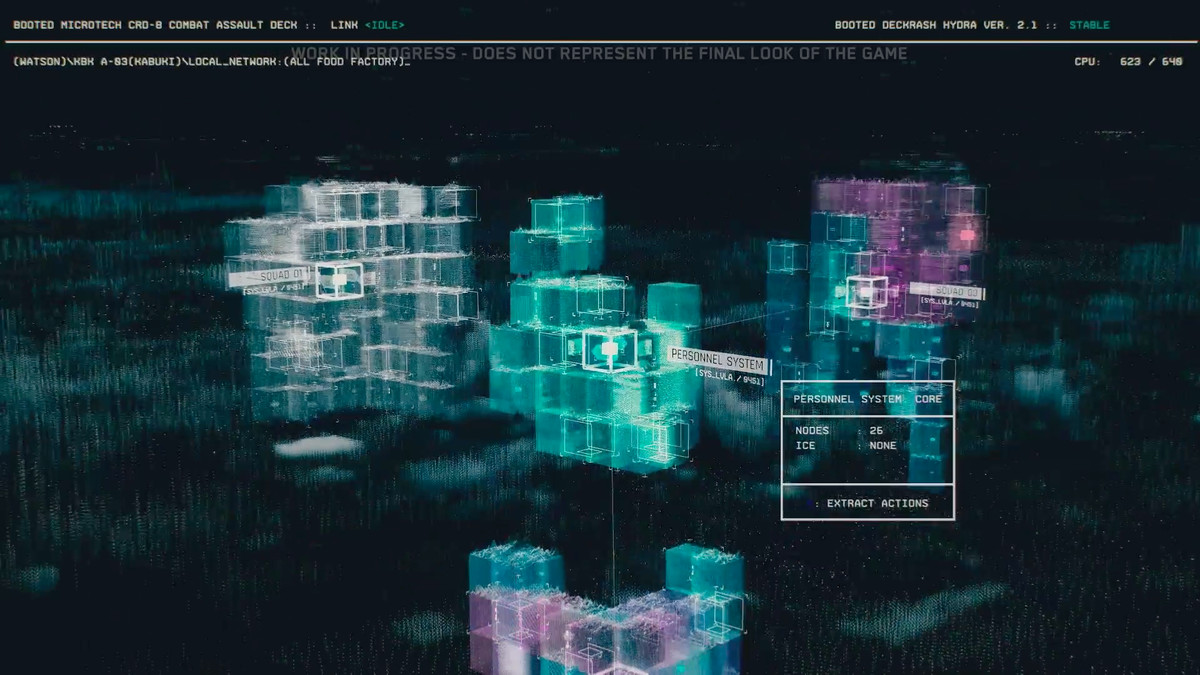 Navigating Cyberspace is going to be weird.

In this year’s demo, the player character was shown immersing themselves in an ice bath before connecting their personal link to Cyberspace. Theoretically, that prevents them from physically overheating while they’re inside the digital realm. But what does CD Projekt’s version of Cyberspace actually look like?

“The general idea is that the way you visualize it depends heavily on who the user is,” Tomaszkiewicz says. “It’s such a vast amount of data that it’s incomprehensible to the human brain. So the mind uses symbolics, it uses the images and thoughts — the ideas it already knows — to make some kind of sense out of it. So you might imagine that V sees Cyberspace differently than [other characters] would, for example. You will go into Cyberspace, but to what degree I’d rather not spoil.”

Unlike the original tabletop game, the character class system in Cyberpunk 2077 is made to be extremely flexible. Players won’t be limited to a fixed set of skills for their class, also known as a role in the original TTRPG. Instead, they’ll pick a life path — either Nomad, Corpo, or Street Kid — and then choose from a large set of skills to create something entirely unique.

Some of those skills, especially hacking skills, will be particularly useful for those who want to attempt a no-kill playthrough of the game. But the team at CD Projekt is making other accommodations for players who want to go that route.

A true pacifist playthrough won’t be possible, however: Some combat sequences will be unavoidable. Tomaszkiewicz says that nonlethal weapons will be easily accessible to players, and every boss will give you the option to spare their life once you take them down.

Character creation is still a work in progress.

CD Projekt took a lot of heat at this year’s E3 for its choice to depict a transgender person in an in-fiction advertisement. I pressed the team on how sexual and gender identity will play a role in character creation, but so far no one I talked to was able to give me a solid answer.

“This is something that we are still discussing internally,” Tomaszkiewicz says. “But stay tuned, we’re going to have an update about this for sure, whenever we make a call on that.” 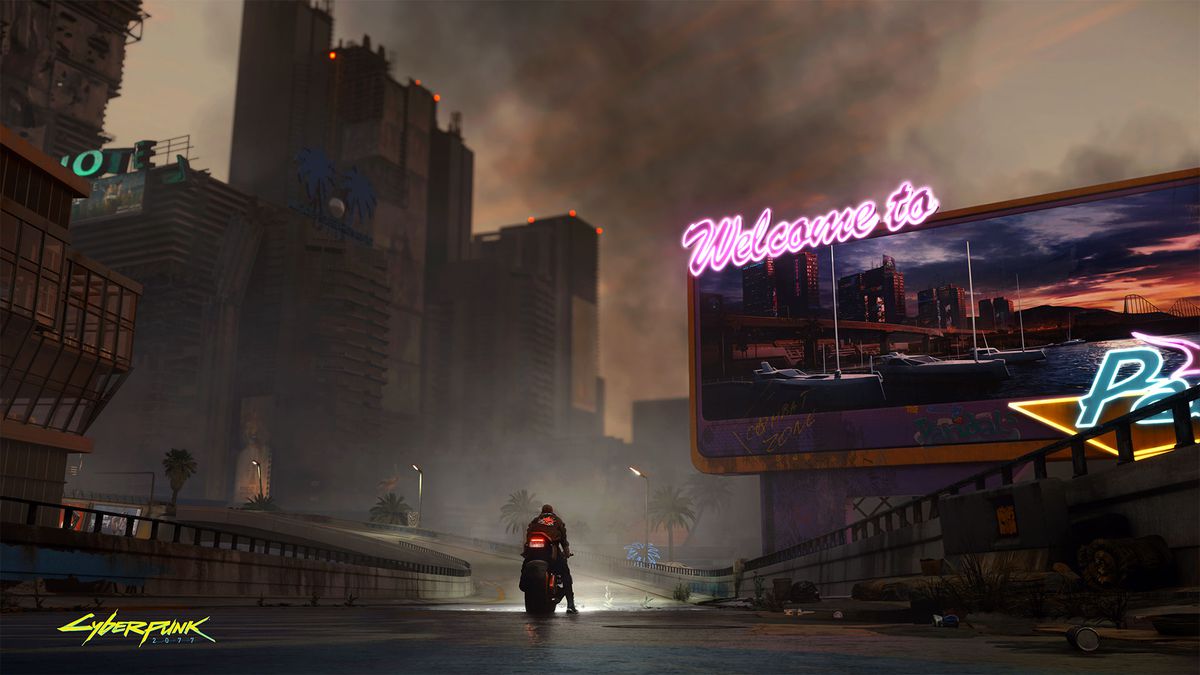 Romance will be included.

Finally, Tomaszkiewicz says that players will have the option to become romantically involved with other characters in the game. That includes having sex, as well as entering into relationships. Most importantly, players will be free to romance anyone in the game regardless of their character build. That will allow players the ability to express themselves however they like, and include options for straight, gay, and bisexual characters.

What’s most important to CD Projekt is that none of these romantic partners will be gated behind player stats or gameplay mechanics.

“We don’t really treat romances in our games as something stat-based that you need to level up for to actually unlock,” Tomaszkiewicz says. “We treat it more as a narrative situation where how you interact with the NPCs matters actually whether they like you or not.”