Dang, Warframe really picks up after the first 20 hours

I find myself suddenly obsessed with Warframe, despite how badly I initially struggled with the game. The satisfying combat and intricate movement were always enjoyable, but I just couldn’t understand how this was the game that had swallowed up so many of my gaming friends.

But it turns out I just had to reach the 20-hour mark, and then everything clicked into place. Warframe demands a large time investment up front, which can feel tiresome even if it’s never bad, but then it suddenly gets very good very quick.

Here’s why I stuck around, and how the game shifts from “OK” to “oh, shit, this game rips extremely hard” as I unlocked more of what the experience has to offer.

From simple to sumptuous

The core gameplay of Warframe is some of the best on the market, but I was rarely sure why I was doing the things I was doing at first.

I pick missions from a planetary map, and take part in what is essentially a high-octane, third-person, ultra-mobile power fantasy. I … go places. To kill aliens, for reasons. Then I go back to my ship, and upgrade my stuff, so that I can kill aliens better. This goes on for quite some time.

But those first few hours are still fun as heck, because at least I get to flip around like a ninja and pin enemies to the wall with a bow.

It’s worth noting that Digital Extremes are extremely aware of this rough new player experience and are actively working on it. This summer, Digital Extremes released a new opening cinematic, directed by Dan Trachtenberg, that serves as a pretty good introduction to the lore. A new in-game opening set up will be coming to the game in the future as well. As for players who start now, Warframe has one of the friendliest communities in gaming, and I was surprised at how often random veterans would stop and lend me a hand.

But I still wanted more after I learned the basics of movement and combat. I started to dig through actual story quests, including one particularly well-told narrative about a revolutionary worker class uprising on the Venus industrial center of Fortuna. It’s the aesthetic of The Expanse combined with the wild creative extremes of the Warhammer 40,000 universe, with some socialism thrown in. Suddenly I was interested in the story of what was going on, and why.

I continued to upgrade my Warframes and weapons, discovering different styles of play that gave me more tactical options. Missions slowly became harder, and introduced new enemies and objectives.

This new variety I was finding sometimes meant I was helping an underclass of heavily augmented debt-slaves overthrow their corporate masters. Later, I stumbled across a boss I couldn’t faceroll, and he mocked me over my failure. That raised the stakes for me, and fired me up. Oh, you think I’m weak, buddy? I’m going to find you, play correctly, and win. I did that, and it felt good.

Warframe keeps adding things as you advance through its structure. There are times when Warframe is like an overeager little kid in a theme park, tugging at your hand. “Hey, check out this PvP system!” No, Warframe, I’m not queuing for a PvP game. “Do you want to use this system to create a custom song for one of your Warframe’s battle abilities?” No, buddy.

Luckily, Warframe also keeps attending to the core experience of loading into a mission and playing space mecha murder. The fast and fluid action remains relevant by turning from the one-sided stomp of a power fantasy into something legitimately challenging, and I had to spend more time learning how to upgrade wisely and use everything at my disposal to continue winning. The difficulty ramps up slowly but surely, and the pacing works very well.

Warframe beginner’s guide: How to survive your first 10 hours

Systems and enemies that I would originally blow through without thinking became a legitimate challenge. Stealing data on Spy missions, for example, requires some thoughtful infiltration and navigation. I have to hack systems, avoid complex laser grids, and occasionally beat a timer before the data I was trying to steal gets purged. It can feel like Splinter Cell in space, and I mean that as a compliment.

What a wonderful world

Even better is that I realized I actually care about the world of Warframe. The storytelling and emotional layers to the game show up late, but they also enhance the experience, and they begin to pile up until I was invested in the story almost without realizing it was happening.

In the early hours of Warframe, I have no one to fight for except the mysterious Lotus who shows up and helps me out. Soon, I see civilizations bustling with people. I have a supporting cast of characters I’m fighting to help, and I even become attached to my faceless Warframe once I’ve spent enough time customizing her and learning how all her systems work.

Many games that operate as a service focus on novelty; I’m expected to constantly take my character into new locations with different systems in order to stay interested. Warframe certainly has tons of options to try and locations to visit, but I enjoyed how much discovering new things and integrating them into my playing enriches the core experience of playing Warframe instead of distracting from it. Every few hours the game basically adds an “and then” sentence to the end of its own description, making the original gameplay loops more meaningful.

I’m still playing the same kind of Warframe I was in my first mission, it’s just better, with more to think about and plan for, and better reasons for why I’m doing what I’m doing. I have more fun, and I care more, but it’s not a totally new and unrecognizable core gameplay experience. Combine the warm glow of success with the fact that, well, Warframes just look awesome and have really cool animations, and every win feels incredibly satisfying. 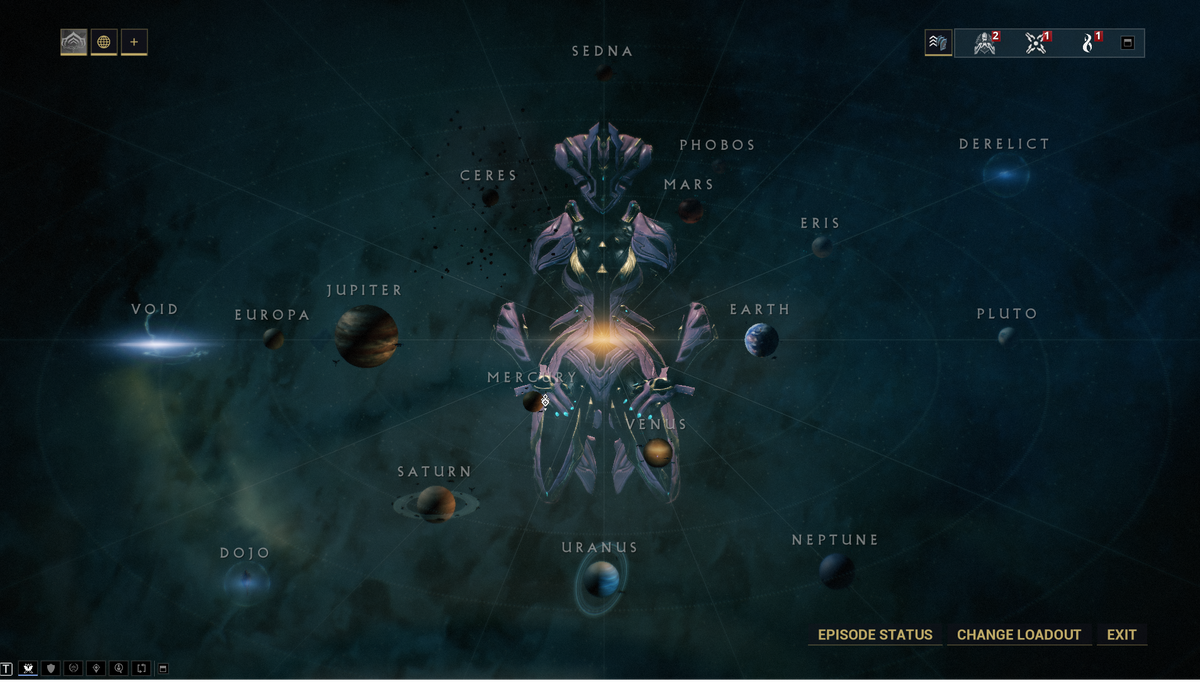 The idea of putting twenty, thirty or more hours into a game before it ramps up may be too much in an era where everyone has backlogs and jobs. That’s a fair critique, and there are definitely people who will never get into Warframe for this reason, or even because it can never really be beaten or neatly filed away.

Even so, I found my time with the game was spent in short bursts. I played for 20 minutes here on a week day, a couple of hours there on a weekend with friends. The game does not demand hours of time during a session, and it’s forgiving with advancement. Even the microtransaction model is flexible; no story or expansion content is only locked away behind premium currencies, and there are alternate ways to unlock in-game weapons and Warframes.

Warframe is also better with friends. While I spend the bulk of my time playing solo, I regularly ping my veteran friends in chat to ask what’s up with Nightwave rewards, or where to go next. Their advice was invaluable. The game also serves as a good excuse to jump on Discord and chat with friends; it’s challenging enough that we all want to play, but straightforward enough that I can use it as an excuse to be social with the gang.

I’m on the cusp of starting The Second Dream, which is apparently the threshold quest that really makes Warframe’s story special. The upcoming Empyrean expansion, which adds spaceship management and combat, was also my personal highlight of this year’s Tennocon.

It took me some time to warm up to Warframe — and not everyone will be able to afford that time commitment— but the reward is a game that’s constantly getting better, with one of the best communities in online gaming. I’m glad I invested the time, and you should think about doing so as well.