Fallout 76’s aristocrats are fighting against ‘peasants’ without a subscription

“I was once one of those, crawling in the dirt,” says Fallout 76 player Shawn Hickman. “But with hard work, some greased palms, honeyed words, I gained my fortunes. In gaining my riches, my sense of class has risen above the common rabble.”

Hickman is joking, I think. Kind of. He’s a part of of a new Fallout 76 group called the Apocalyptic Aristocracy, a clan of Fallout 1st subscribers who come together while wearing the finest and fanciest gear the MMO has to offer.

Bethesda’s launch of Fallout 76’s $12.99-per-month subscription service, Fallout 1st, was a mess. Private servers weren’t really private, basic features were busted, and the servers themselves were buggy. The public, meanwhile, was shocked to see Bethesda charge for premium services when the basic game itself is technically glitchy and, at times, disappointing.

There were even reports of in-game bullying. As the game visibly denotes whether or not you’re a subscriber, word got out that annoyed players were being targeted for daring to pay Bethesda extra money. Media called it a “class war,” or a “class divide.” I spoke to a couple dozen Fallout 76 subscribers, who largely said they didn’t experience any sort of harassment for their in-game status. Even the Reddit thread originally claiming there was an issue was filled with skeptics whose experience did not line up with the popular narrative.

Days after these reports went out, however, I spoke to a couple of players who claimed that their subscriptions caused strife. Khalifa Al-Kuwari on Facebook noted that a crew of players wearing bear costumes ganged up on him after performing an emote exclusive to Fallout 1st subscribers, and that hostility was echoed by a couple of other fans as well.

It’s possible that the virality of the initial reports set copycats into motion, though it’s still an overstatement to say these tensions can be seen game-wide. All the same, the mere existence of Fallout 1st sent the internet at large into a frenzy, with commentators disparaging Bethesda for coming up with the concept in the first place. Fallout 76 already has a stigma. Any time I write about the game, people are surprised to hear anyone is still enjoying it. That negative aura darkened after Fallout 1st’s rocky launch. You could argue the discourse around the MMO has become nearly stifling after the release of The Outer Worlds, a game made by the original creators of Fallout and is widely considered a spiritual successor to the Fallout brand.

The Fallout 76 narrative is this: Why would anyone waste time playing Fallout 76 when there’s something better out there? Why would people pay extra money to have a supposedly shoddy experience?

But fans are paying for Fallout 1st all the same. After all, the service provides utility, like better storage and improved options for loot farming. But most people didn’t care about that part. As far as the internet is concerned, Fallout 76 is a punching bag. The problem was that the toxicity started spiraling out of control outside of the game.

“[The situation] quickly turned from players complaining about Bethesda to insults against those who paid for the subscription,” says VectorZarak, a founder of the Aristocracy. 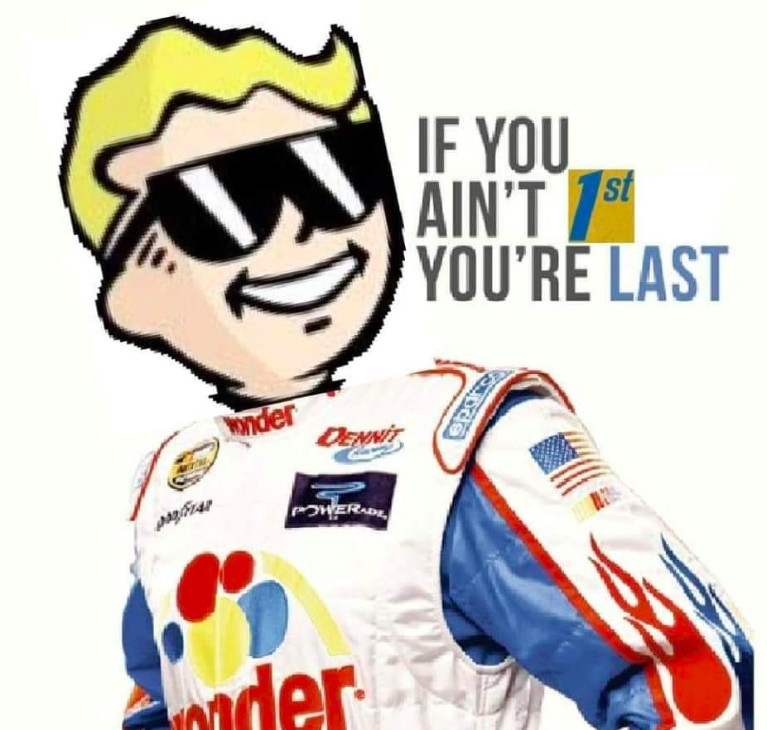 Initially, VectorZarak tried easing the tension in various Fallout 76 groups by creating memes about the Fallout 1st situation. Similarly, VectorZarak noticed that other players kept making up jokes about the supposed class war, with some subscribers pretending to give others trading discounts for high-value items, while up-selling “peasants” who aren’t paying subscribers. It wasn’t real, but the anxiety around Fallout 1st fanned the flames all the same. Folks believed the shitposts, because they wanted to believe that Fallout 76 was only capable of becoming a more convoluted mess.

And so, rather than sulking in the shame of enjoying something that the internet has told them they should hate, some of Fallout 76’s players are now embracing the villainous caricature the public made out of whole cloth. 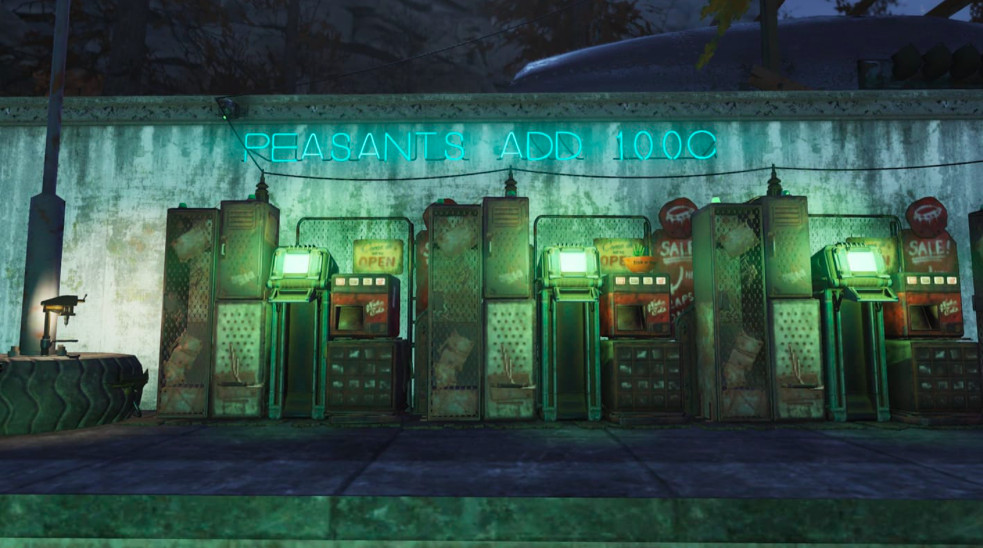 A meme that purports to show Fallout players charging extra for “peasants” who don’t subscribe to a membership. While meant as a joke, some believed it to be real.
Apocalyptic Aristocracy

Initially, the creation of the Apocalyptic Aristocracy group was somewhat of a joke — VectorZarak didn’t even have a subscription himself at the time. But, as he started inviting players to the clan, word started getting out, and memes about the Fallout 1st high life started exploding.

“Within a day or two we reached 100 members,” VectorZarak recalls. (As of this writing, the Aristocracy is staffed by nearly 300 players.) “There was a real change in the dynamic as people flooded in. The anti-subscription players had become very toxic, so much so that players could not even discuss the private servers or the bonuses that came with them without being insulted or yelled at. What started as a joke quickly turned into a safe haven, where players who had subscribed could openly discuss Fallout 1st topics without being attacked.”

As VectorZarak tells it, the group doesn’t truly look down on people who don’t have a subscription. In part, the whole idea is meant to satirize elitists, and the people who insist that Fallout 76 has a class tension. But if you speak to the members themselves, the role-play starts blurring the lines a little thanks to folks and memes who refer to non-paying 76ers as “peasants.” 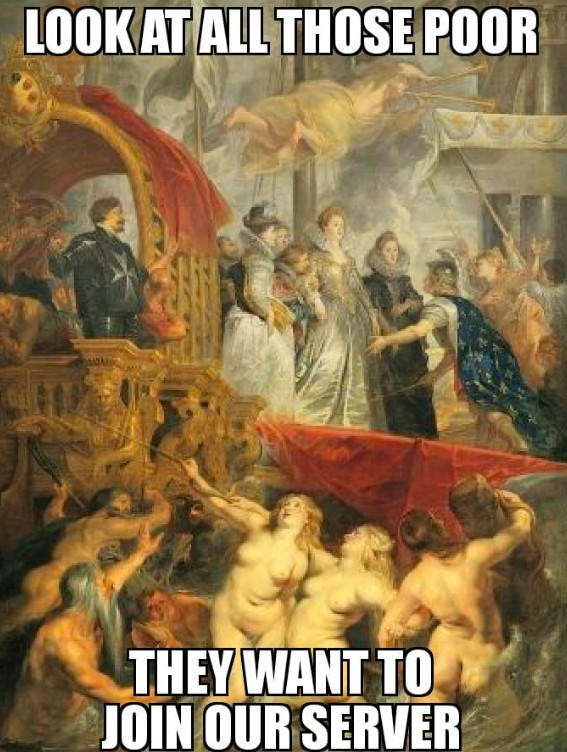 When I asked players why they’re a part of the group, the first response I got back was from Terry Mollinet, who says, “We joined because we’re better than everyone else.” Mollinet later clarified that it was a joke, but other fans seem to like holding up the veneer, because things are more fun that way.

“I really enjoy getting under someone’s skin and then at the end hitting them with the good old, ‘learn to laugh, it’s just a joke and only a game’ to later double down on my trolling,” said Jeremy Singer, one of the Aristocrat’s leading meme-developing troublemakers.

“I joined to whip ass and chew on peasants, and I’m all outta peasants,” Shibby Hocker said on Facebook.

Donald Meeks, another member of the clan, stated, “We are simply classier and wealthier than the common rabble! Why sully yourself on a public server when you can hoard legendaries for yourself and sell them for a massive profit to the less fortunate!”

Kenny Tull, another Fallout 76 fan, gave me a thoughtful response about how he felt the outrage against Fallout 1st was “manufactured” by YouTubers, given that there’s actually plenty of utility in the subscription.

“I get two days off a week, sometimes less,” Tull said. “I don’t have time to grind challenges for atoms, or fight to farm for workshops,” he continued, noting that the subscription helps him with those issues. But all the same, he ended his rationale with something very tongue-in-cheek. “We’re also definitely superior to the peasant class and we needed to band together to keep them off our slightly scorched front lawns.” 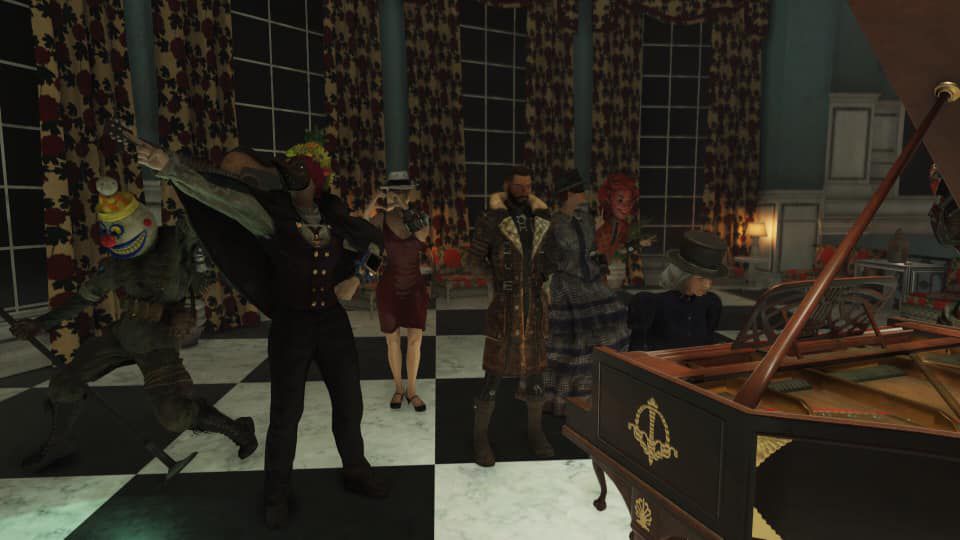 For the most part, the Aristocracy seems like a good bunch. While many play up the high class aspect, other members seem to just want a respite from the constant barrage against Fallout 76.

“Nothing seems to bring people together like shared suffering, and the past week has seen a lot of venom spewed toward Fallout 1st members,” said VectorZarak. “I want to give players a place to go where they can peacefully discuss and plan with others who use the private servers.”

So far, the group has gotten together for photoshoots where they dress up and embrace their status as premiere Fallout 76 members. But there are also plans to have red carpet events, hunting parties, duels, and perhaps the establishment of official noble houses, to take the role-play to the next level.

“We know [Fallout 76 is] not perfect, but developers don’t work for free, so we do what we can to help fund the improvement and expansion of the game,” VectorZarak said.