Bethesda announced at E3 2019 that non-player characters are coming to Fallout 76, reversing one of the most striking decisions made about the game’s initial design. The additions will be part of the upcoming Wastelanders update and, to prepare for them, I have totally changed how I play the game — for the better.

Needless to say, the promise of NPCs has forced me to abandon my prior strategy for surviving the post-apocalypse. I acted as a chameleon, taking on whatever role I needed to make it through each session. One day, I’d be a scavenger wearing Enclave armor. The next, I’d bulk up in mercenary-looking gear to guard my friend’s shop. Some days, I’d just head out and explore, killing hordes of giant sloths and Scorched.

Now that I know that Fallout 76 will reward me for playing a consistent character, I have decided it’s high time to get started on the path to self-actualization, to find my forever character.

Who am I called to be?

The answer, I have come to learn, is Abigail Havelock: Appalachia’s own wine mom.

I knew Abigail couldn’t simply be another paper-thin wine mom stereotype. She needed depth. Characterization. Hopes and dreams. So I sought out a proven dramatic template.

I needed to harness the powerful energy of Prindel Blatch.

You might remember Prindel Blatch as an NPC in Anthem, assuming you remember anything about Anthem. Blatch has remained seared onto my brain. Whereas most people in the world of Anthem are worried about foolish things like “the survival of humanity” or “glory in a broken world,” Prindel Blatch spoke to me at length about the cluster of power cords someone left in a hallway, or how to manage crowds through civic regulation.

As an NPC, Prindel Blatch slaps extremely hard, forcing me to answer questions like “is cord management important?” and “are there too many people in this room?” A Prindel Blatch type is precisely what the world of Fallout 76 needs.

I mean, look at Appalachia. People are just building their CAMPs wherever they want. On mountains! Near dirty water! They’re just building shacks with turrets out front, and their lawns are a mess.

I imbued my Abigail with the soul of Prindel Blatch, bestowing upon her a respect for the rules, an obsession with small details, and an overwhelming need to be deep in other people’s business. I made Abigail the head of the HOAPAA (Homeowner’s Association of Post-Apocalyptic Appalachia), and I gave her one job: to bring some class to this scrap heap my fellow players call a neighborhood.

And that is how Abigail entered the world. 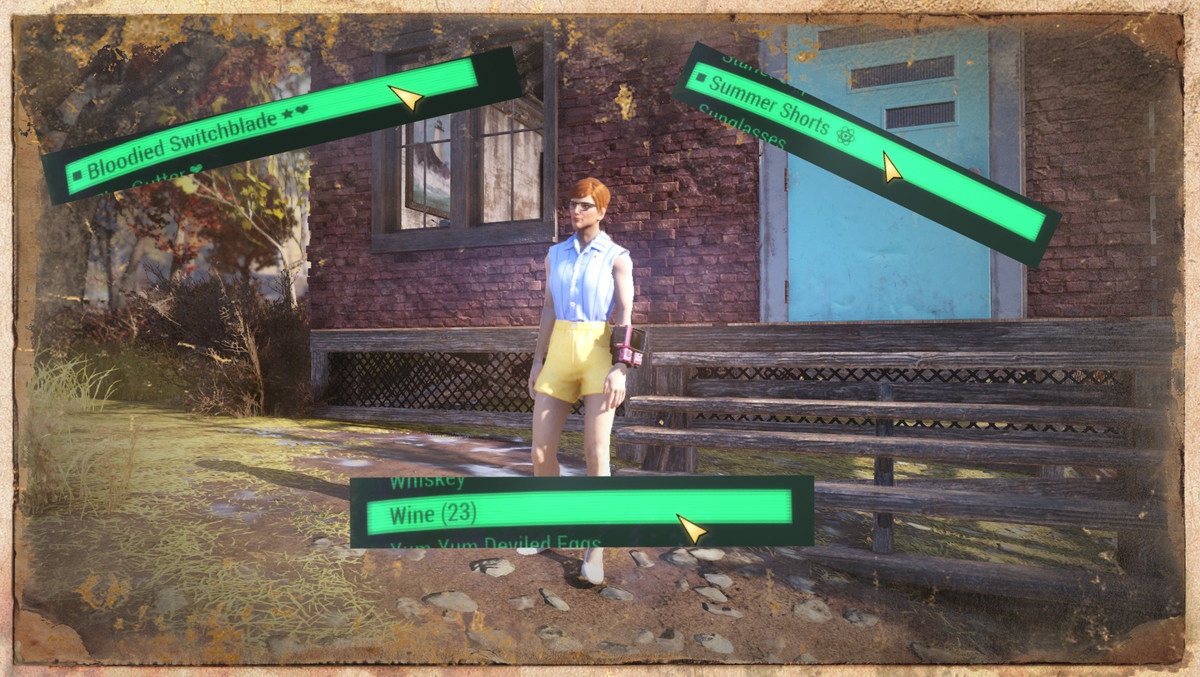 Unlike Abigail, I live a humble life. I cannot channel wine mom energy, and I’ve never been part of a homeowner’s association. How, then, can I ensure that my role-playing comes across to my new neighbors as authentic and true?

I start with my SPECIAL array: the allotment of Abigail’s Strength, Perception, Endurance, Charisma, Intelligence, Agility, and Luck. It’s not optimized for ideal gameplay, but it tells a story in and of itself.

As Abigail, I’m strong and fast (so I can run the local PTA with an iron fist), and I’m definitely smart enough to organize local bake sales and appreciate an ice-cold box of white zin. But I have no idea what the fuck is actually going on, and I don’t need charisma, because I’m not here to make friends.

I have a wonderful little home that screams high class. I have brick walls, paintings of ships and lighthouses, and a soothing blue-and-white theme. Every night, I go to sleep on mothman-branded sheets, and when I awake, my home is lit by lamps that have little fishes swimming in them. Truly, this is luxury.

I keep my home immaculate and elegantly designed, as I cannot encourage others to clean up if my own domain is not perfectly arranged.

I still have building to do; of course, I’ll be keeping to code. I’ll eventually have a kitchen, although for now I’m less worried about home-cooked meals and more about replicating Thirsty Thursdays at the local Applebee’s.

Nobody gets little details right like a wine mom. 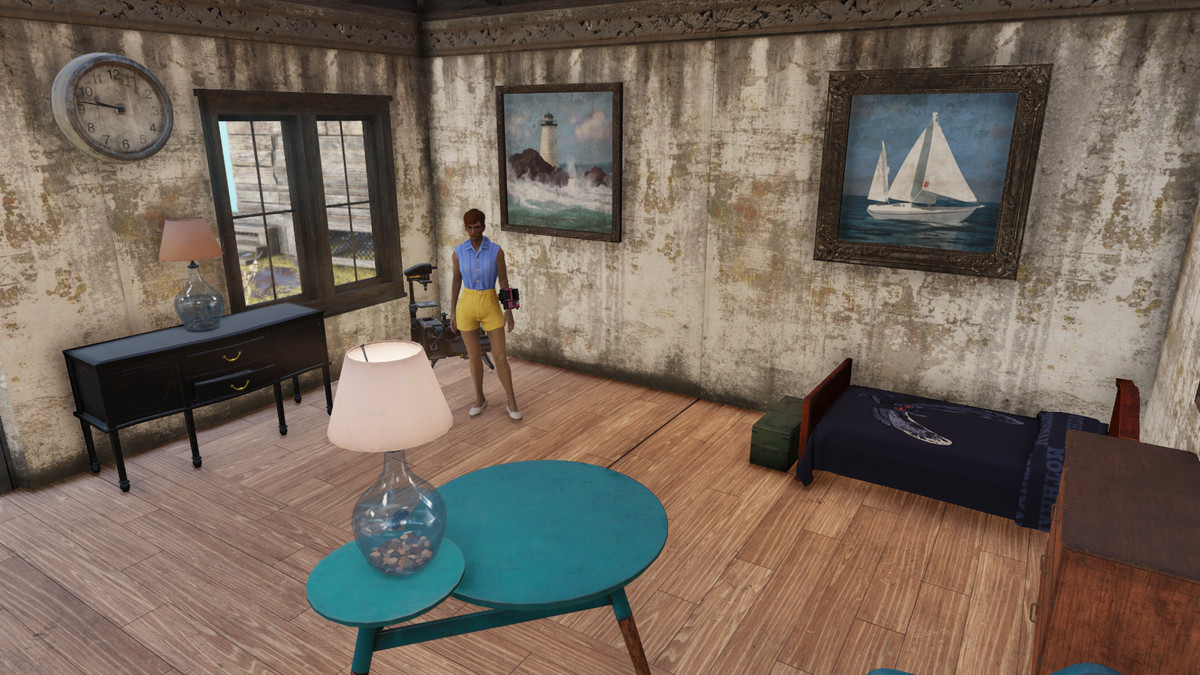 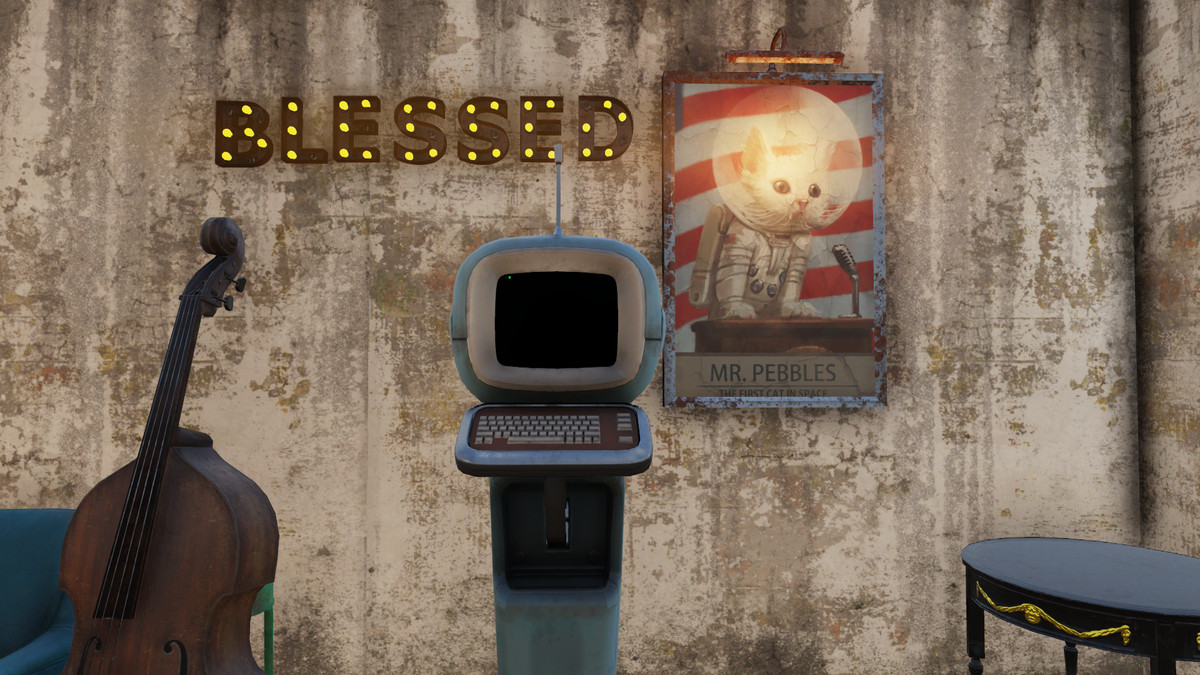 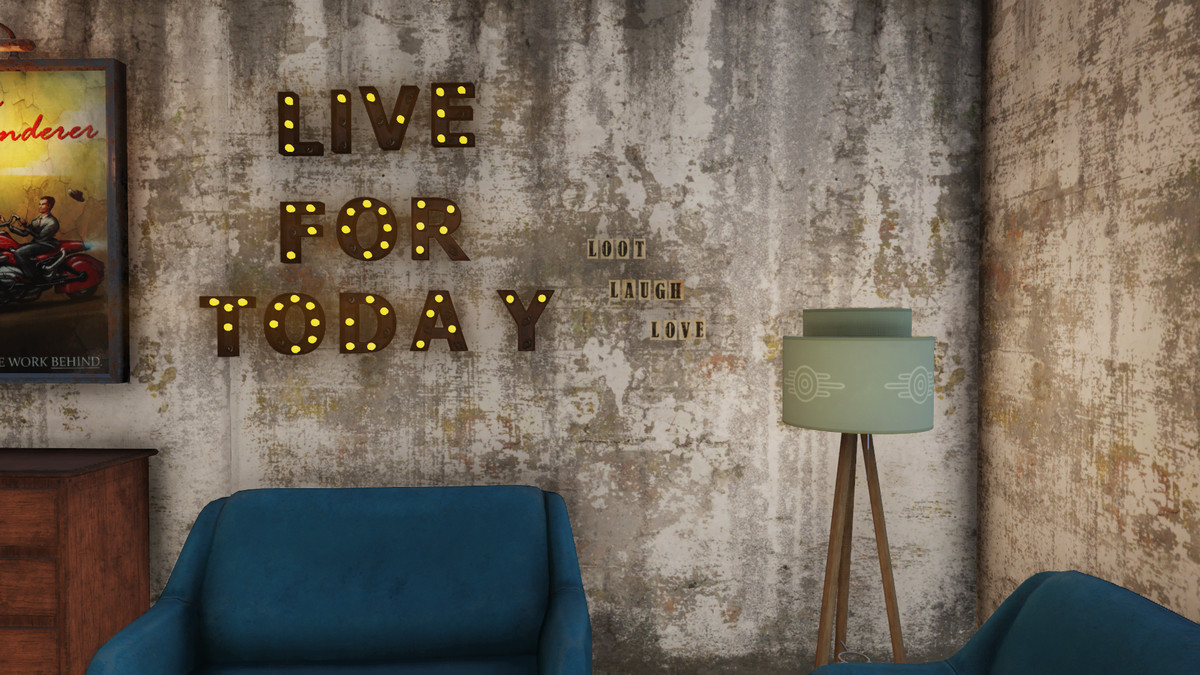 Now I’m completely in character. I have powerful wine mom energy coursing through me.

But, to become Nextdoor made flesh, I must impose my home ownership methodology upon those who live within shouting distance of my front door. I find this to be quite challenging. Fallout 76 doesn’t offer many tools for enforcing my thorough list of home ownership requirements. There is no neighborhood Facebook group through which to shame the man who builds home expansions late at night, let alone a government agency for me to call when I suspect their house wasn’t built far enough from the street.

This is why I carry a switchblade with me.

It is not the perfect tool for maintaining order, but it is good for the stabbing. Sometimes you gotta do some stabbing in the wasteland. That’s fine, and I don’t want you to ask too many questions about it. Yes, sometimes I stab ghouls and then when I try to loot them I end up slurping handfuls of dirty creek water. Yes, sometimes I stab players who don’t introduce themselves when they move into the neighborhood. Yes, sometimes I pick the locks on players’ CAMPs so that I can go in and make sure that they’re following the rules of my homeowner’s association. 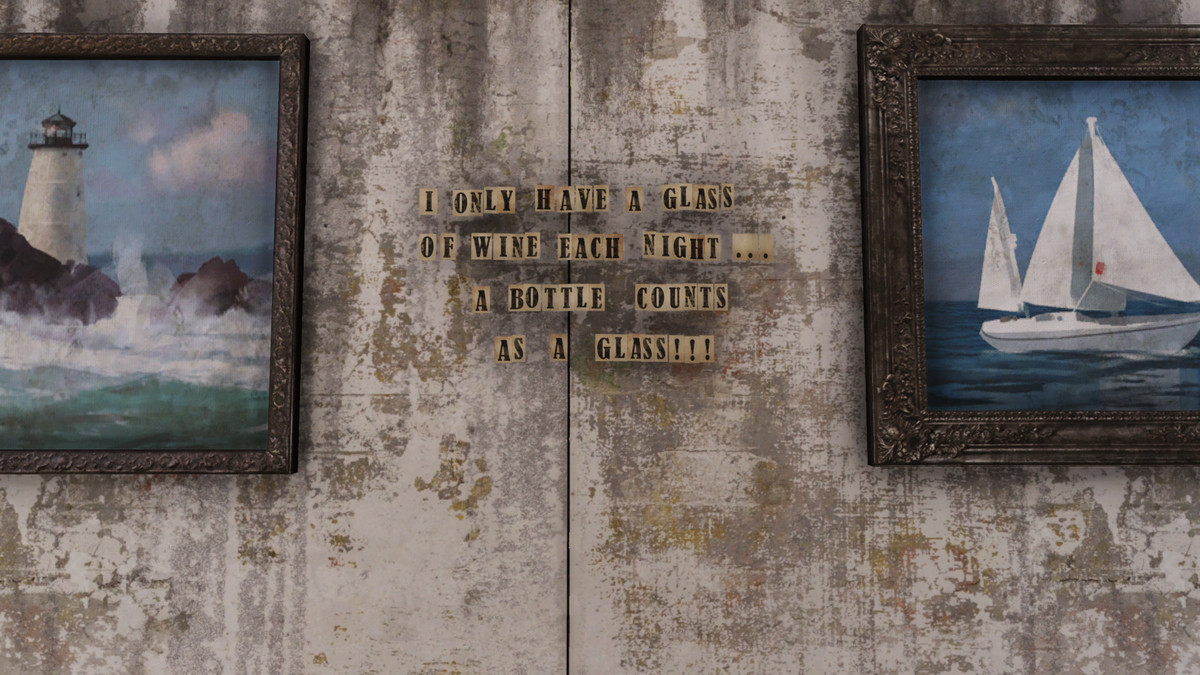 Someone needs to be the moral authority around here, and it might as well be me. I’m drunk on wine and power. I’m committed to my role.

I don’t even need the NPCs that Wastelanders will bring. I’m already role-playing. I’m completely immersed in the world of Fallout 76, and I am mad as hell that my neighbors are bringing my property values down with their absolute nonsense.

Look at this wreck! I understand we live in a wasteland crawling with Super Mutants and ghouls, but this is just uncivilized. 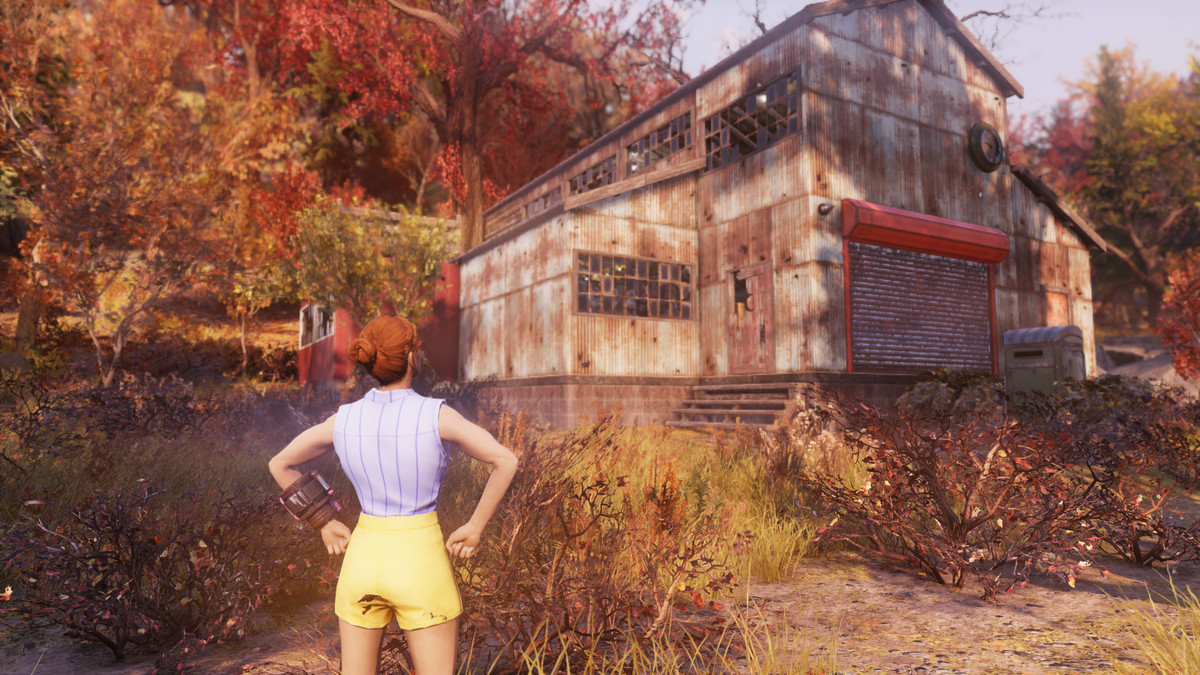 Unfortunately, the denizens of Appalachia aren’t quite willing to buy into my new association. Even though it’s in the best interests of all of us, they have concerns. Some of the issues that fellow Fallout 76 players have with the idea of a Homeowner’s Association are:

1) They’ve just set up too many wires and they can’t get the building up to code.

2) They don’t plan to have any company over except for ghouls and ghosts.

3) One guy just told me to “fuck [my] own shit” and then assailed me with a variety of grenades and Molotov cocktails, suggesting that he was on his own journey of role-playing and self-discovery.

4) An overall concern about ruining the unique aesthetic they’ve cultivated.

Unfortunately, when the NPCs arrive for Wastelanders, I’m concerned they’re going to find that Appalachia isn’t civilized at all. We won’t be able to have a little backyard barbecue with the neighbors, because everyone’s far more concerned with trivial annoyances like “killing the Scorchbeast queen” and “completing quests to obtain legendary gear.”

Don’t worry, dear reader: I won’t give up. I’ve found several more bottles of wine in the kitchen of the Whitespring Resort Golf Club, and I’m saving up Atomic Points for kitten-themed home cosmetics. It’s good to know that even though Fallout 76 has been out for months, I’m still finding new ways to play.

Having big updates to look forward to is a bonus, but the real fun is the freedom. After all, any game that allows me to chug several bottles of merlot in my summer shorts and then yell at my neighbors for having mines outside their house has got to be doing something right.