Judgment is a spinoff of the Yakuza series, based on a story by the franchise’s longtime producer Toshihiro Nagoshi. It takes place in the exact same city as 2018’s Yakuza 6, with the same shops and alleys and crime syndicate families, built with the same assets, on the same Dragon game engine. Sure, this time I’m a different person — private investigator Takayuki Yagami instead of gangster Kazuma Kiryu— but it all feels so similar that it’s tempting to see Judgment as just a reskin, intended to find new use for some assets left over from Yakuza 6.

The new protagonist helps make Judgment welcoming to anyone — there’s no need to be familiar with the nearly 15 years of Yakuza series lore to play. And now is as good a time as any to jump into the series; Judgment is so bold and complete that it works as an introduction or a companion piece, depending on your familiarity with the franchise.

It does share a lot of the same mechanics as other Yakuza games, but they’re introduced slowly with plenty of pop-up reminders about what to do. As I run through the streets of Kamurocho, I get plenty of chances to practice fighting when I get jumped by roving street toughs. And that practice comes in handy because, while I’m an ex-lawyer turned private investigator, I still solve every case by punching someone — or, more often, a crowd of someones — into submission. Investigating cases as the story unfolds often requires traversing the entire city, so there’s plenty of impromptu punching and exploring to do. 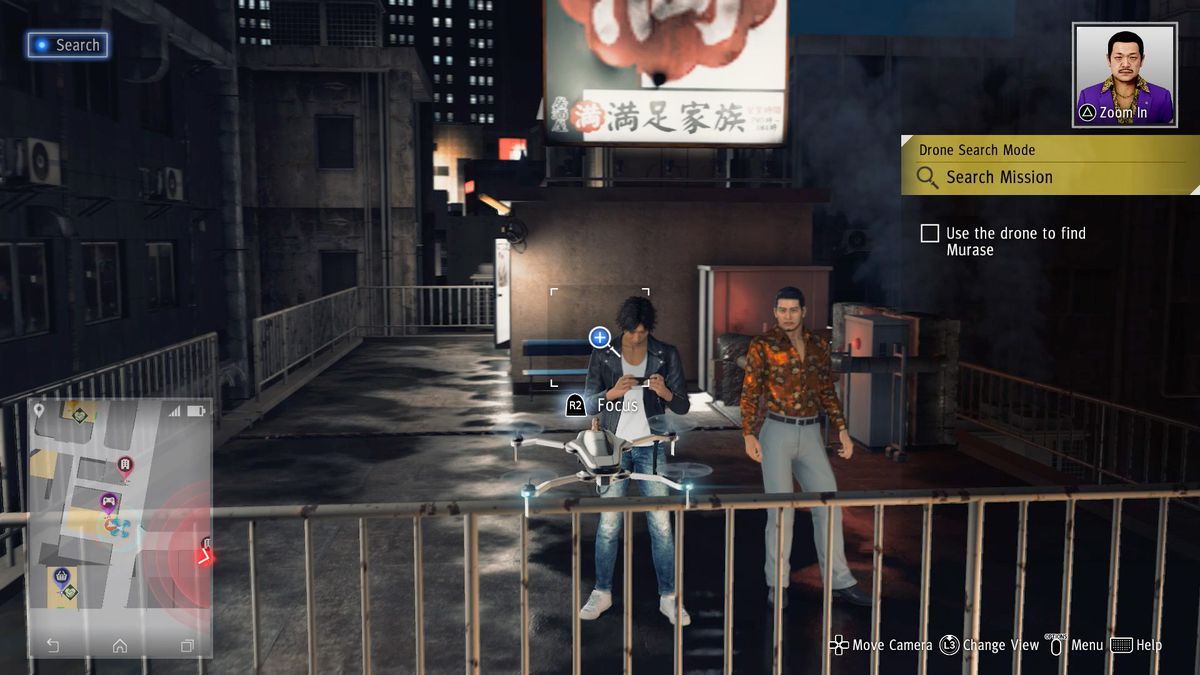 That’s just like Yakuza 6, but there’s more to Judgment than just finding the next person to punch. Yagami has tools I use as a private investigator that are new to the series. When I arrive at a locked-down office building, I have a drone that lets me peek through the windows above me. Arriving at a crime scene shifts me into a first-person investigation mode where I can scour the area for clues. There’s a tailing mechanic for when I need to follow someone through the streets of Kamurocho without their knowledge. 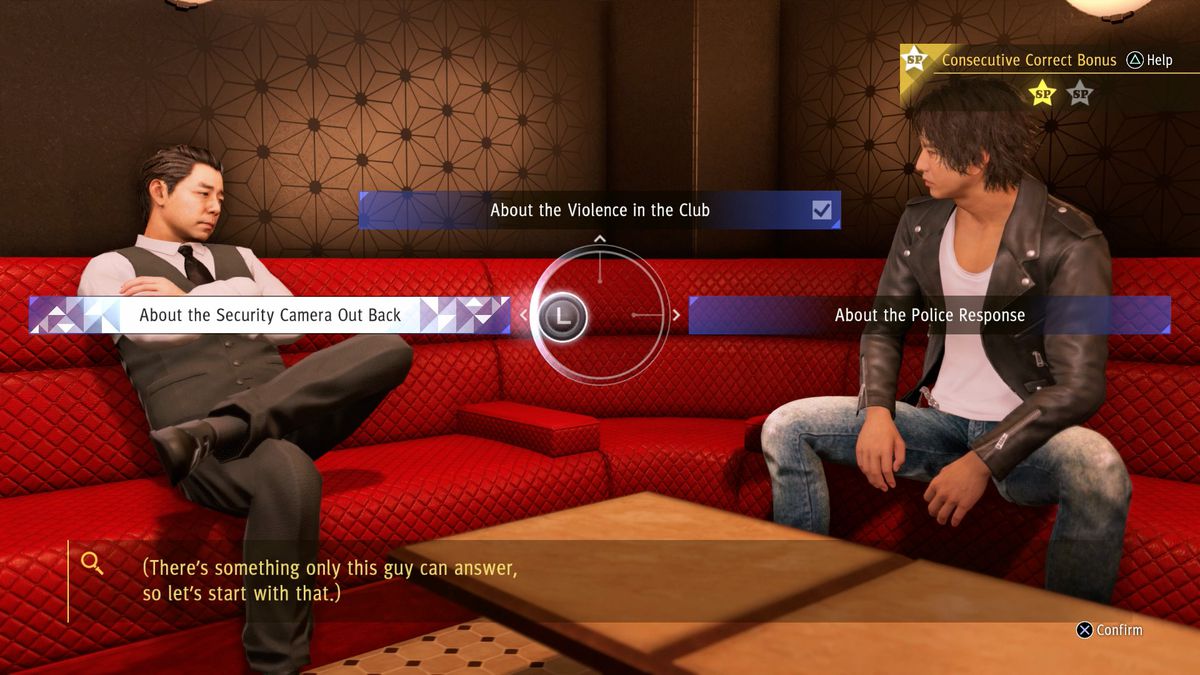 All of that evidence I gather comes back when I have conversations. Unlike other Yakuza games, I get dialogue prompts where I have to recall the things I’ve seen, or information I’ve pieced together. I also have to find the right photo on my phone to prove my points. Sometimes I have to decide who in town might have information to help me without the game giving me a prompt.

Even the city of Kamurocho is richer. There are still the same diversions, minigames, and pointless distractions I remember from Yakuza 6, but a new mechanic lets me build friendships around the city. These relationships are generally lighthearted — and I usually build them by doing silly things like chasing a wind-blown wig through the streets or coming up with a new marketing campaign for a fast food chain — but they connect me to the city. I’m invested. I smile when I bump into one of my new friends, with their own smiley-face icons floating over their heads. I get presents in my mailbox. This system makes the world feel complete; Kamurocho might be the same city I visited last year with Yakuza 6, but this time I live there.

Which isn’t always a great thing, as Judgment can be a firehose of information, plot, and emotion. What starts off as a simple enough “someone should really do something about this serial killer” plot quickly branches out in many different directions, some more interesting than others. I learn the circumstances of Yagami leaving his job as a lawyer through long cutscenes and conversations. I learn of the events leading to a friend’s excommunication from his yakuza family. I visit old mentors and make new friends. 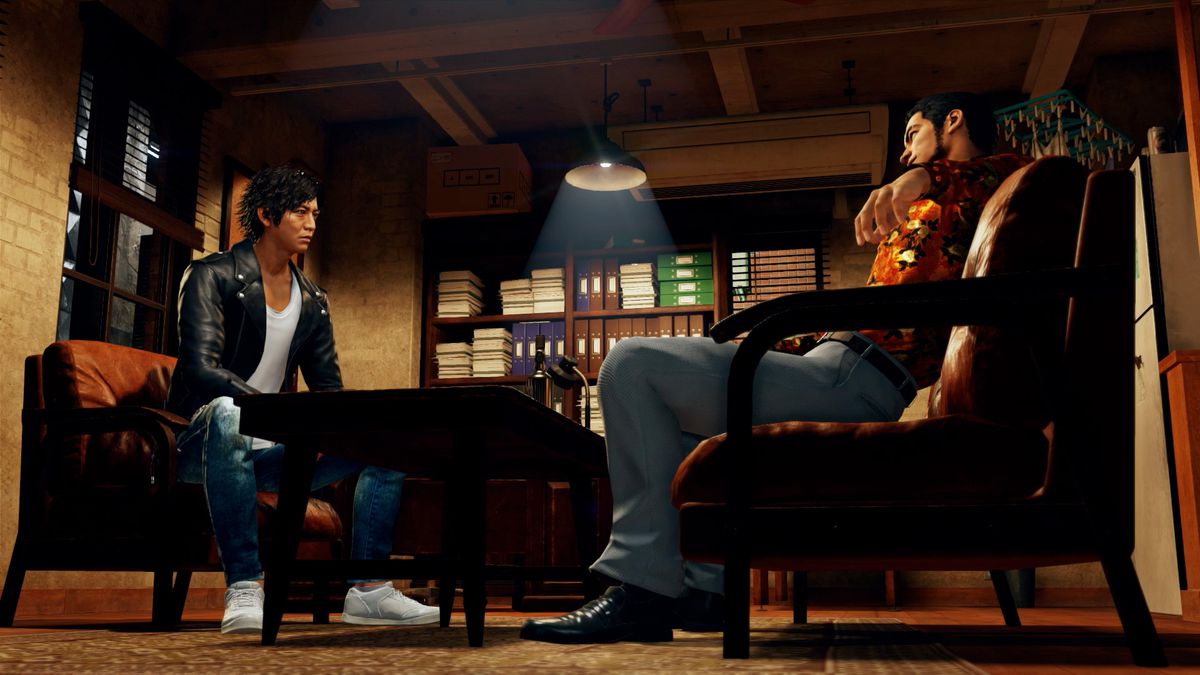 And then, just when I think I understand what’s going on, I’m met with another new cutscene that introduces another new twist. A friend murdered. A robbery that might’ve been an inside job. An old lie that has implications up to the present day. It never seems to end, for good or ill.

But I have many different ways to slow down the pace when the story — the bloody, heavy, complicated story — and the city with its flashing lights, barkers, and constant crowds gets overwhelming. I can go play darts or hang out in an arcade. I can go to a casino. I can try my luck in the drone racing league. I can go on a date. I can pump a few thousand yen into a gachapon machine hoping to get a limited edition coelacanth toy. Yes, I just got accused of murder, but I also definitely have time to stage a mock trial with my friends to figure out who ate the last piece of cake in the office refrigerator.

The game’s 50-plus hours can be intimidating, both in terms of story and just how much there is to do in Kamurocho. But those moments of everyday life, random silliness, and pointless distraction helped me let the story breathe; I was never frustrated by the interruptions. I needed the breaks from the intensity, whether the game provided them or I decided to take them on my own. 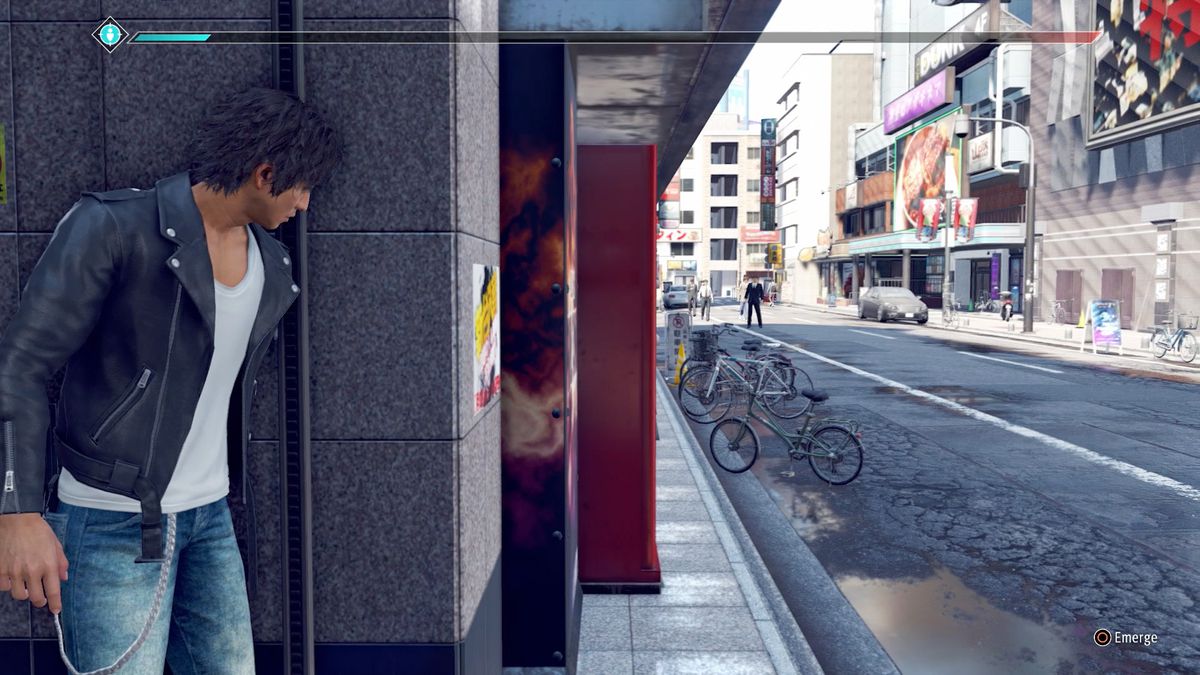 But the pacing isn’t always great. The first time I have to follow someone through the streets feels intense, and I duck behind every corner to make sure I’m not spotted. I’m exhausted by the seventh time I’m asked to do this, however, and just want it to be over. There are so many friendships to build that I’ve started skipping them — 50 is too many friends in real life, let alone in video games. Some of the beat-up-the-protection-racket-to-save-the-baker-to-get-the-cake-to-bribe-the-secretary-to-sneak-into-the-club-to-get-the-information-I-need quests are too drawn out, even by video game standards.

I rush from one event to the next to progress the story, sprinting wildly back and forth across the city as I try to force the game to play on my timeline. But I wind up stalling out when I have to wait for an in-game phone call. So I slow down, take a breath, and end up getting hired as a moonlighting locksmith somehow. Only after I’ve gotten paid for my first gig do I get that phone call about the eyeless corpse that was found in an alleyway.

While it might share its bones with other Yakuza games, Judgment builds something new out of them. It doesn’t stray from its roots — it’s still a crime drama with lots of punching — but it fills out the story of the city and its people in a way that’s not possible from a game focused only on the criminal underworld. This is the same city, just seen from a very different perspective.

Judgment is being released June 25 on PlayStation 4. The game was reviewed using a final “retail” PlayStation 4 download code provided by Sega. You can find additional information about Polygon’s ethics policy here.