Minecraft is having a big comeback in 2019

2019 has had a few constants on the internet so far: “Old Town Road,” Keanu Reeves, Area 51, a general sense of unease about our impending ecological disaster. Surprisingly, a 10-year-old video game has also joined the mix — Minecraft, the iconic block builder.

Minecraft, it should be noted, has quietly been dominating video games this entire time: By Mojang’s count back in 2018, over 91 million unique players log in every month across all platforms. (Fortnite, the hottest visible game of 2018, had 78 million unique players during an all-time high.) But things are changing in 2019. Minecraft’s dominance is no longer out of sight from the mainstream. For one thing, it is picking back up on Google searches:

But, perhaps most notably, seemingly every big YouTube star is championing the game right now. What’s causing the uptick?

The first and most obvious reason is that Minecraft is a safe bet on platforms like YouTube. Right now, many top creators feel that monetization on the platform is volatile, but Minecraft seems to be an advertiser favorite. It makes sense, too: Minecraft isn’t violent, and it’s not controversial. Kids love it. Of course influencers are embracing Minecraft again. But the increased interest can also be traced back to specific creators and changing attitudes as well.

For over a year, YouTube creator Grandayy — who is known for his Minecraft memes — kept suggesting the idea of a “Minecraft Monday” to Keemstar, a YouTube gossip reporter who has increasingly been holding more video game competitions over the last year. After begging for Keemstar to host it, the YouTube personality finally gave in. Like his Friday Fortnite tournament, Keemstar opted to bring in big names who could attract huge viewerships, such as Fortnite superstar Tyler “Ninja” Blevins. Blevins alone brought in nearly one million viewers on Twitch for that first week. Then, on week two, there was another megaton: Keemstar had convinced YouTube king Felix “PewDiePie” Kjellberg to participate in the event alongside beauty guru James Charles. Suddenly, nearly every big name on YouTube and Twitch was playing Mojang’s sandbox game. Minecraft became a spectacle once again. According to Keemstar, millions of people tune in to his show every week.

Kjellberg alone has been driving huge interest to Minecraft. The Swedish YouTuber started a Minecraft play-through in June, and installments in the series are getting enormous views. (The first in the series, for instance, has 21 million views.) A YouTube representative reinforced Kjellberg’s influence on Minecraft’s resurgence to Polygon, citing him as a specific example of “new video formats and trends around the game.” Game developers have noted in the past that Kjellberg has a powerful effect on the visibility of any given game, sometimes improving the sales of a title by orders of magnitude.

But part of what made people turn out for Kjellberg’s playthrough was that the YouTuber has continually joked about refusing to play Minecraft. Part of Kjellberg’s protest against the game was seeing that high-profile YouTubers were heralding the game back in its heyday despite not actually enjoying it. To wit, Adam “SkyDoesMinecraft” Dahlberg made headlines in 2017 after announcing that he was giving up the game because continuing to make content about it felt “fake.” (He has since gone back to making Minecraft videos in 2019.) And so, for longtime PewDiePie viewers, watching the blond YouTuber go back on his word and actually enjoy a game he used to denounce has delighted fans.

Part of why he’s finally diving into Minecraft in 2019 is that he feels that he is flexible enough to not have the game define his channel. He’s playing it for now, because he wants to — not because it’s a trend, or because it’s easily monetizeable.

“If Minecraft gets boring, I can just move on to other things,” Kjellberg said in the video where he explains why he’s playing the game right now.

The combination of being an advertiser-friendly game, Kjellberg’s ownership of the game, and Minecraft Monday has sent visible shockwaves throughout YouTube. Seemingly everyone, from Jacksepticeye to Lazarbeam have been broadcasting the game on the video platform. It’s become a running joke, even, that Fortnite channels are pivoting to Minecraft as interest in the battle royale genre seems to be decreasing on social media. 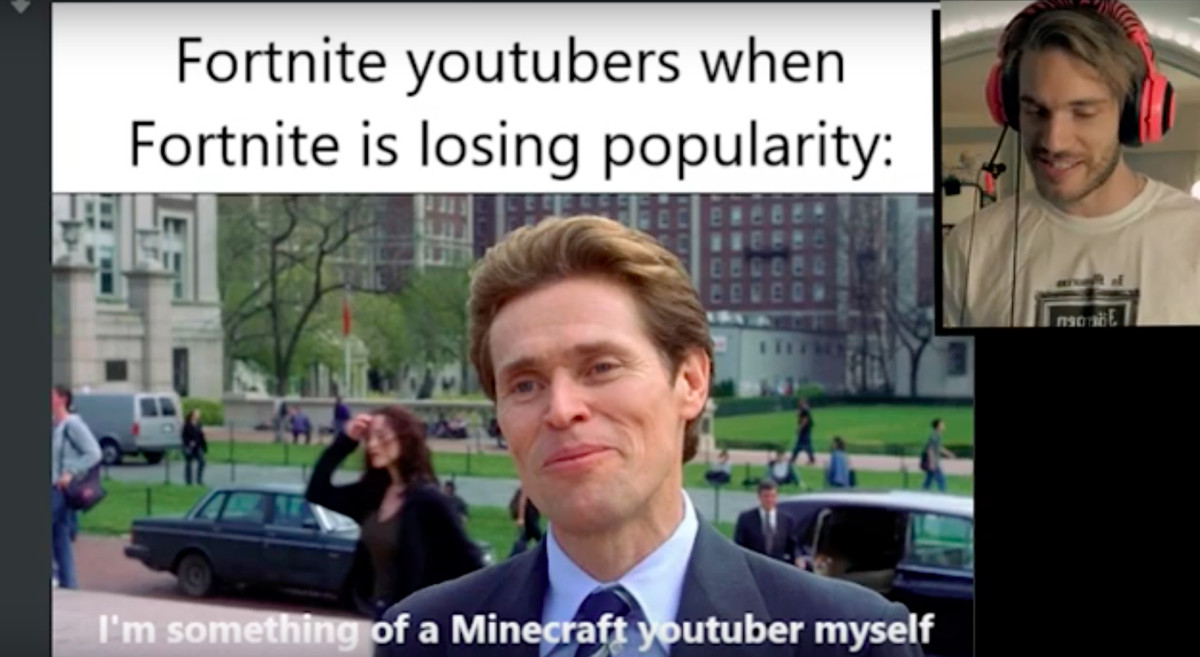 And, to Minecraft’s credit, the game has managed to maintain interest through updates and increased ways engage with its world. Augmented-reality game Minecraft Earth, which is currently in beta, seems to be the only thing capable of putting up a fight against Pokémon Go. Minecraft Dungeons, also announced this year, will bring a Diablo-like experience to a younger audience.

According to the people spearheading this new wave, it actually helps that Minecraft is an old game. The people who grew up on Minecraft and left it behind as they got older are starting to miss it, influencers say.

“Nine years later those children are older teens or adults and nostalgia has set in,” Keemstar told Polygon. “Over the last two years, Minecraft has been added to meme culture, making it also cool again.”

Grandayy, who has made a name for himself making elaborate Minecraft jokes on social media, agrees with this assessment. He thinks people are pining for the game based on nostalgia factor, and then are surprised to find that the experience can still feel fresh in 2019.

“To anyone who hasn’t played [Minecraft] since 2013, the game today almost feels like a totally different game … I think Minecraft is one of the few games that never truly gets old, at least not permanently. Since it’s a sandbox and you can do pretty much anything you want in it, it’s more than just a game, it’s almost like a digital toy or digital platform.”

It’s not just that the game has new stuff. Creators on social media continue to reference the game, which helps the game feel relevant even in 2019. I don’t even play Minecraft, but I still enjoy watching Grandayy’s bizarre videos, such as the one where he parodies Belle Delphine by advertising “Chicken Farm Water” in Minecraft.

“I pretty much never stopped making Minecraft memes and Minecraft note block music,” Grandayy told Polygon. Some would even credit Grandayy for helping convince Kjellberg to pick up the game, though Grandayy himself says many people were pushing for this to happen. Whatever the case, the ripples are everywhere. Just this month, a 2011 remix of an Usher song created by YouTuber CaptainSparklez started trending again on sites like Genius. As of this writing, the video has 184 million lifetime views.

“Generations in the past collected baseball cards, toy cars or Barbies as adults because of nostalgia,” Keemstar told Polygon. “In this day of age we will see video games of the past resurrected due to the same thing. Minecraft will be hot for the next two years before we see it decline again.”

FFXIV's Crossover With Final Fantasy 11 Is Out Now

Destiny players can finally see The Almighty ship plummeting toward Earth
We and our partners use cookies on this site to improve our service, perform analytics, personalize advertising, measure advertising performance, and remember website preferences.Ok