An Early Look At Drifters, The New Hero-Shooter From Blind Squirrel

Even three years after release, Overwatch is still regularly adding new characters and drawing huge crowds, so players are clearly interested in well-made, character-driven shooters. Drifters is being developed by Blind Squirrel, a studio that has previously worked on ports for several popular triple-A games like the BioShock Collection and Prey. Its first original game, Drifters, is a free-to-play hero shooter that is hoping to mesh the serious competitive nature of Overwatch with the more arcadey experience of Super Smash Bros.

A 5v5 team game, Drifters is all about knowing your roles. The goofy loot-hungry marauders you play as all have their own strengths, weaknesses, and playstyles that are important to understand if you want your team to make off with the biggest haul at the end of a match. You’ll have characters that run the usual gamut of classes: tank, healer, assault, sniper, and support.

Much of the game’s charm lies with its characters. Five were on display, but three more are still being added. All the heroes look diverse and interesting: 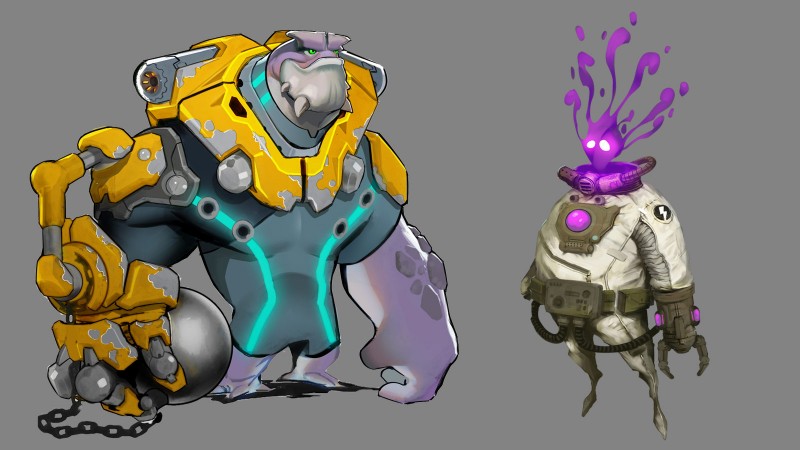 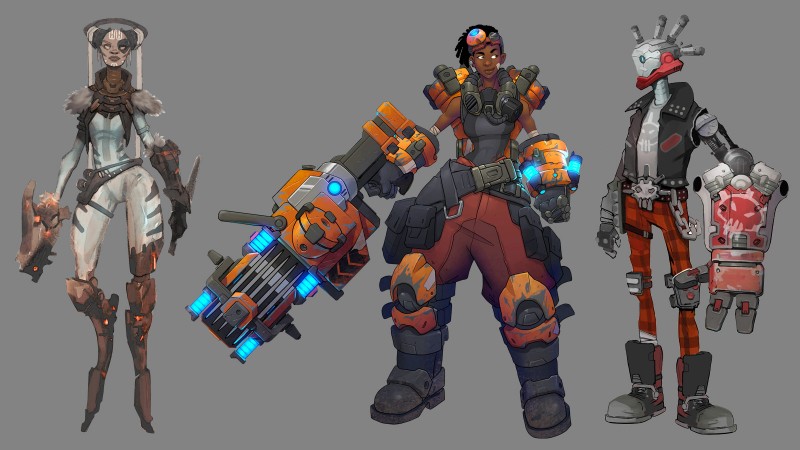 We only had the chance to see these five characters, but eight will be available at the game’s launch. The characters all had a fun, irreverent charm, and they mesh well with the spacey environments reminiscent of Insomniac’s Ratchet & Clank series. 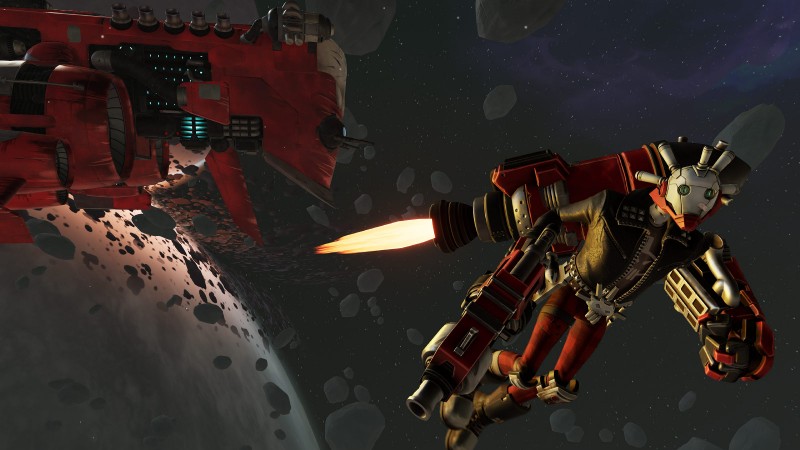 With a rogues gallery of characters to choose from, the game has plenty of variety. They might not necessarily have deep lore guiding them like in Overwatch, which speaks to Drifters’ Smash Bros. inspirations, but those inspirations extend beyond its characters.

“The thing we like about Super Smash Bros. is how the characters react to the action” says creative director Haydn Dalton. “We have a lot of stuff that either knocks you back, causes you to skid out of control, or sends you 40 or 50 meters away. Players can use their jetpacks to recover and do all these acrobatic feats, and when you knock people into walls you really feel it. There’s almost a cartoony aspect to it. We want to make sure there is a little bit of comedy to the game.”

Drifter’s mobility is its hook – quite literally. Characters come equipped with a grappling hook and jetpack that lets them not only close the gap between players but also make a swift getaway. Grappling seems useful for getting around quickly when you need to get across the map to a new objective or to get into the firefight, and the jetpack, as you’d expect, is good for giving you that little extra distance when you’re trying to make a jump. It’s also good for simply getting a new vantage point on the opposing team. This added momentum looks to bring a fresh approach to the hero shooter. 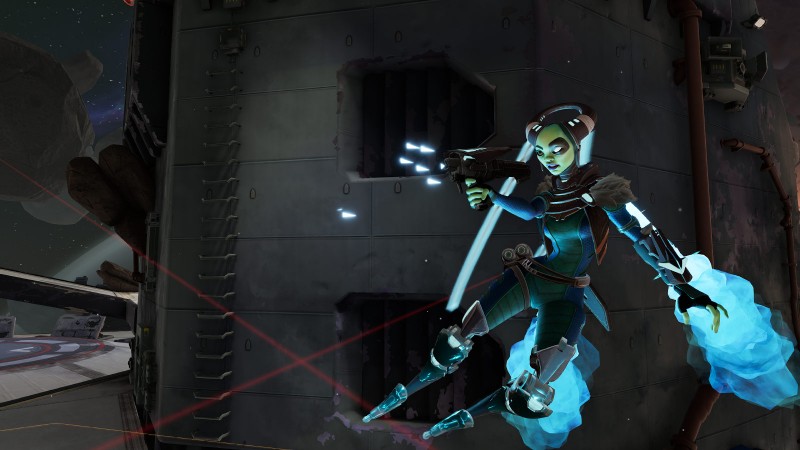 The map we saw was a large space freighter floating through an asteroid field, and it looked fairly expansive, but not so large that navigation was a burden. One fun feature of the game was that every time you respawn, instead of being plopped down somewhere in the level, you are loaded into a cannon on a nearby ship, and you aim at the level to pick where you’d like to launch yourself. It was silly, but in keeping with Drifters’ attitude.

Drifters will feature five different game modes at launch including variations on the standard deathmatch, king of the hill, and capture the flag. The mode we saw, Plunder, was a twist on capture-the-flag. You are tasked with exploring the map to locate treasure hidden in breakable objects littering the area, which, once captured, must be deposited at a drop point. You then need to hold off the other team before your “plunder” is cashed in. The first team to manage this five times wins the match.

Speaking of loot, when you successfully airlift your cargo, your team members are all rewarded with small cosmetic bonuses after the match. You can also unlock different loadouts for the characters that don’t necessarily make you stronger, but do alter the play style. Characters have different attacks and weapons with their own strengths and weaknesses that you can tailor to your preferences along individual skill trees.

“There will be some vanity stuff in there, but we’re actually going to focus on a tech tree-style upgrade system, so you can invest in the way each character’s guns work,” says Dalton. “For example, you can change what type of shotgun your character carries. Guns will all ultimately do the same amount of damage, but they will deal it out in different ways, which might fit your play style. So, some shotguns might blast wider but not as far, and some might do a little less damage but fire faster.” 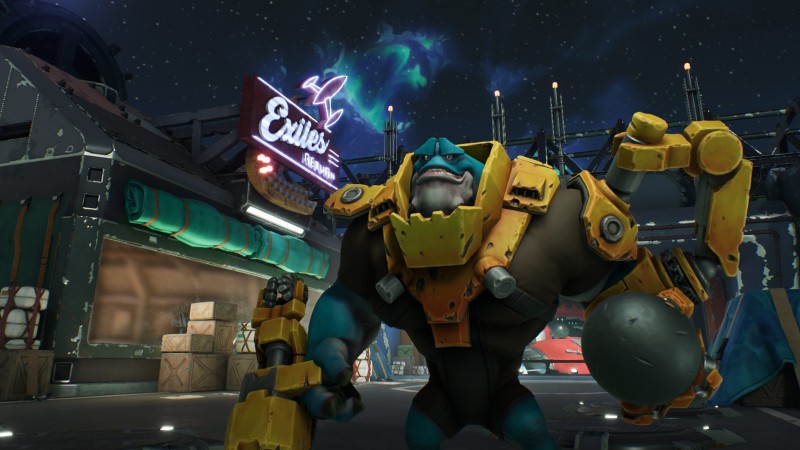 The world of Drifters is rich with detail, and to support that world, Blind Squirrel has teamed with Vault Comics to flesh out the characters in a tie-in comic series. This frees up the team to focus on creating characters with cool abilities that are first and foremost fun to play. If the setting has you wanting more, then the comic can fill in the blanks.

Drifters will have three maps (Blind Squirrel aims to roll out more if the game does well) and five game modes. The game shows a lot of promise; the characters were visually distinctive and the action looked frenzied and fun. Blind Squirrel is still looking for a publisher, so much of this game is subject to change by the time the game finds its way out on PS4, Xbox One, and PC by the end of the year.