If you’re a fan of virtual reality – or getting ready to dip your toes into the platform with the release of the Oculus Quest 2 – Resolution Studios is a developer that you’ll want to be sure to know. The Stockholm, Sweden-based game studio has already seen success with VR titles such as Acron: Attack of the Squirrels!, Angry Birds VR: Isle of Pigs, and Cook-Out: A Sandwich Tale, with its most recent release, Blaston, available now for the Oculus Quest. Blaston brings a fun and addicting gunplay element to an American Gladiators-type of format that will keep you on your virtual (and real-life) toes.

At its core, Blaston is a PvP title that puts players in a futuristic head-to-head battle scenario with each player standing across from one another on a nearby platform. When each round begins, various guns, throwable weapons, and shields generate around each player. The limited-use weapons can be grabbed and used to take out the other player, with each weapon having its own distinct abilities. For instance, the shotgun unloads a medium-speed spread of multiple bullets, while the sniper rifle fires off high-speed single rounds that take longer to reload. It’s up to each player to avoid each projectile while firing back at the other player. Round winners are determined either by the player left standing, or the player with the most amount of health after the time limit is reached. 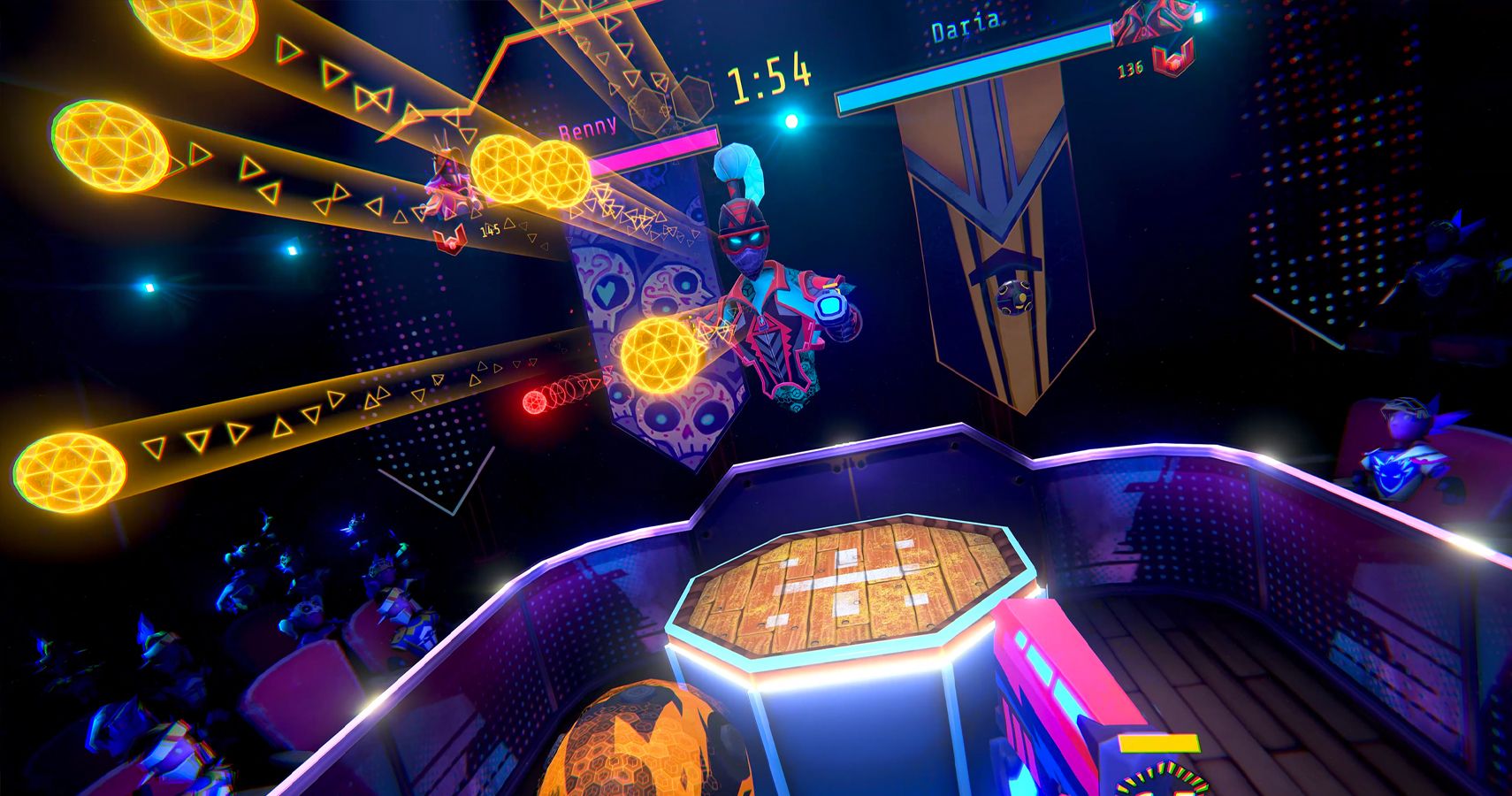 Don’t be fooled by the cartoon-like visuals, Blaston does an excellent job with its in-game immersion. Being hit by a projectile feels weighted and impactful, while dodging bullets is enough to make me feel like Neo in The Matrix. There is also a surprising amount of strategy involved, since besides dodging out of the way, incoming projectiles can be stopped by shields (obviously), as well as your own shot-off projectiles as well.

Each weapon has a damage amount, but also comes with a collision amount which acts as a form of shield against any bullets shot your way. In addition, the projectiles you shoot don’t take friendly fire damage. So, for example, if using the Nova, which shoots giant, slow-moving orbs, you can actually use another gun to shoot through the orb en route to your opponent, adding an extra layer of strategy since your opponent might not even be able to to see where you’re aiming.

Who Needs Cardio, When You Can Just Play This? 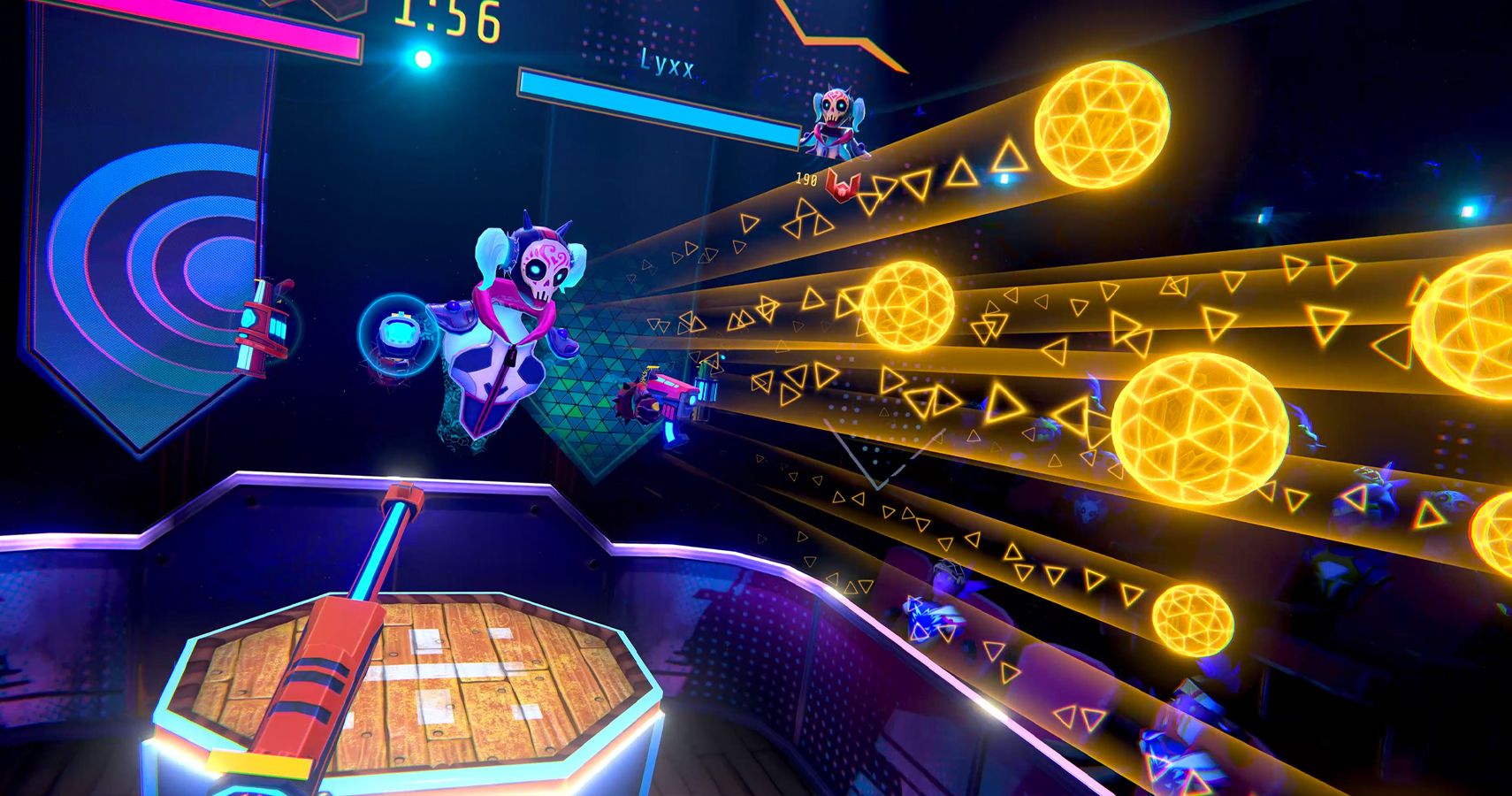 With each battle essentially being an in-person bullet-hell, Blaston is fast and intense, requiring swift and thoughtful movements. You’ll need to be sure to play in a wide-open area of play, since bullets will be flying at you from multiple directions. You can’t go too far, though, lest you fall off of your platform (and into the audience watching the battle). Because of my low level, the CPU isn’t as hard to defeat as in later levels. However, the online head-to-head matchups do more than enough to make me work up a sweat (and make me realize that stretching before playing Blaston would have probably been a good decision).

Multiplayer sessions are where Blaston shines. When jumping into a duel, the game will first look for any other players doing the same to pair you up. If none are found within a short (and reasonable) amount of time, you’ll be put in a match against the computer. Should another player be looking for a bout while you’re in a CPU battle, the match will stop, and you’ll be sent to fight the real-life player. Thankfully, CPU match progress is still counted, so you’ll still be given a win. Of course, you’ll receive a loss if you were losing prior to the new challenger, but I don’t find that to be any sort of punishment. From there, it’s onto a battle with another real-life player. Leaderboards track the progress of your rank over the course of a season, with Season 2 plans for the game already in the works. Although there is an impressive amount at launch, there aren’t a ton of players on the board yet, so the sooner you pick up the game, the better positioned you’ll be to take the Season 1 crown.

Coming in at only $10, if you own an Oculus Quest, Blaston is more than worth the price. The game is utterly addicting thanks to its well-executed VR gunplay and bullet-hell mechanics, along with its overall fun-factor. The ability to join up with friends or others via the game’s matchmaking system will provide you with plenty of hours-worth of playtime. As I mentioned earlier, though, just be sure to stretch a bit before taking the platform.

An Oculus Quest copy of Blaston was provided to TheGamer for this review. Blaston is available now for Oculus Quest and will be making its way to other VR platforms in the near future.

Next: HyperX Spectre Gaming Eyewear Collection Review: I Can See Clearly Now, The Strain Is Gone 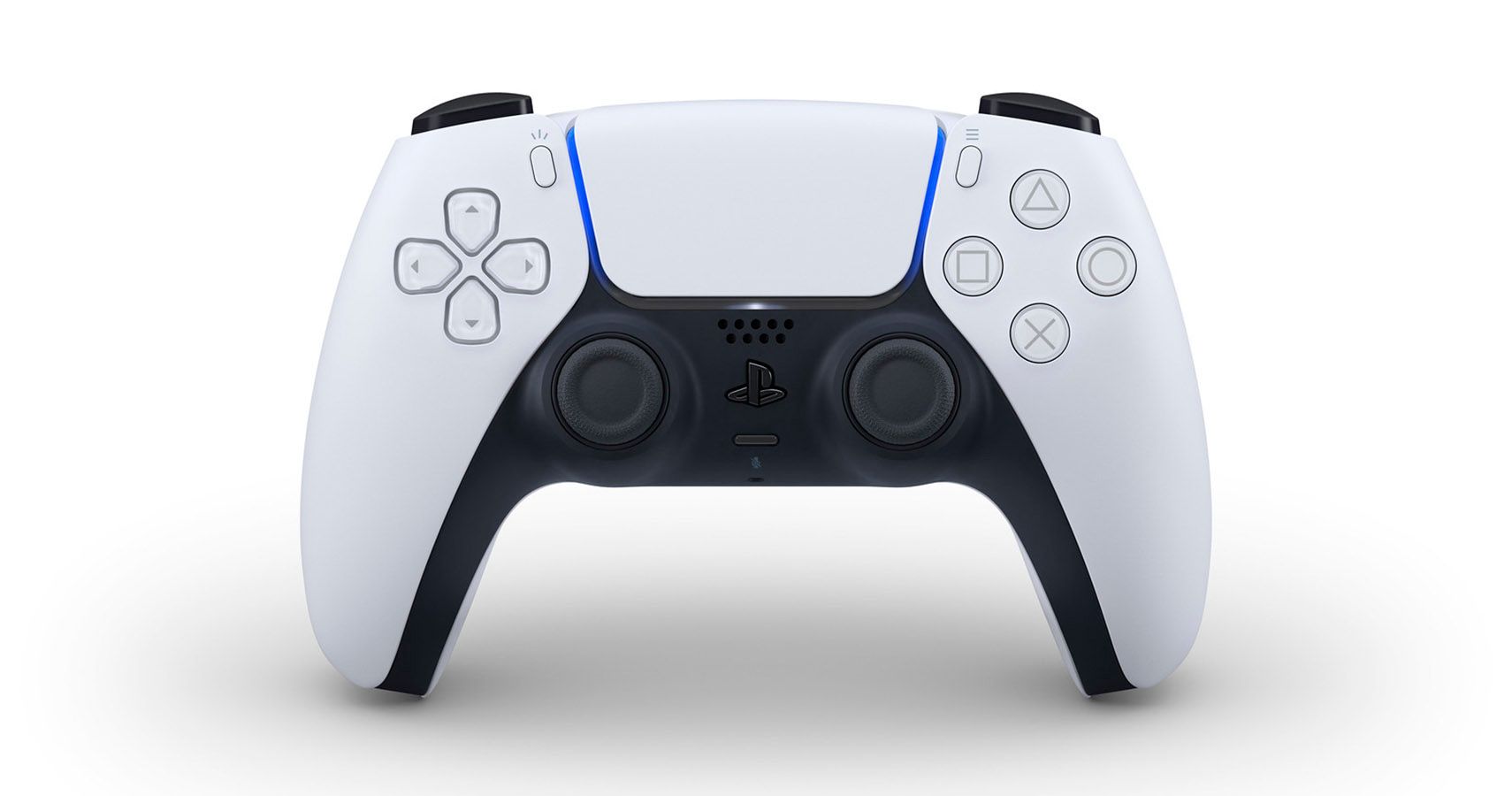