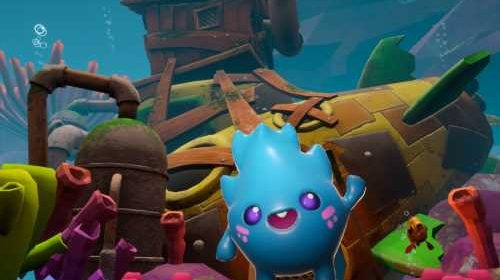 The Electronic Entertainment Expo (E3) may have ended for another year but that doesn’t mean the videogame announcements have to stop. Today, developer Brave Lunch has announced that its first original virtual reality (VR) title Blobkin Blaster will launch in August, with a demo available on Steam now.

A family-friendly wave shooter with tower defence elements, Blobkin Blaster takes you under the sea to fight polluted, mutated monsters lurking in the deep. By your side are the cute Blobkin, little critters who’ll help you clean up the oceans. They come in four variants, Blasty Blue, Explosive Red, Purple the lightning bolt, and Yellow, a ping-ponging homing missile.

The gameplay involves a mixture of using the Blobkin as ammo to shoot the various monsters and rubbish swimming around the reef as well as placing defences. You’ll be able to build traps and cannons to give yourself an advantage against the 12+ enemies and three major bosses Blobkin Blaster has in store. You have to be careful with the Blobkin as they’re not only your ammo but your health as well.

This might be Brave Lunch’s first original videogame but the team has an impressive back catalogue of work, having designed experiences for Walt Disney Imagineering, Chuck-E-Cheese, Sesame Street, and Amazon Studios’ The Man in the High Castle to name a few.

“Save the reef, blast the fish! Mixing our love of VR, wave shooters, and real time strategy, Blobkin Blaster is a wild cartoony take on the world beneath the waves,” said David Andrade of Brave Lunch in a statement. “Inspired by our own backyard of the Florida keys, we brought in creatures warped by pollution, invasive species, and other monstrous delights for you to blast in VR!”