Bookbound Brigade is a 2D Metroidvania that feels as if the developers of The Wonderful 101 made a game based on The League of Extraordinary Gentlemen. The game does a lot of interesting things with its concept and offers a tough challenge for fans of the genre, but a few problems with its design prevent it from being a must-have title.

Bookbound Brigade is set in the Literary World, where historical figures and fictional characters live together. One day, the all-powerful Book of Books is stolen and the existence of the Literary World is threatened. It’s up to a group of heroes called the Bookbound Brigade to track down the culprit and save the book. The starting roster of the Bookbound Brigade includes King Arthur, Dracula, Robin Hood, Dorothy Gale (from The Wizard of Oz), and Sun Wukong, but more will join the player over the course of the game. 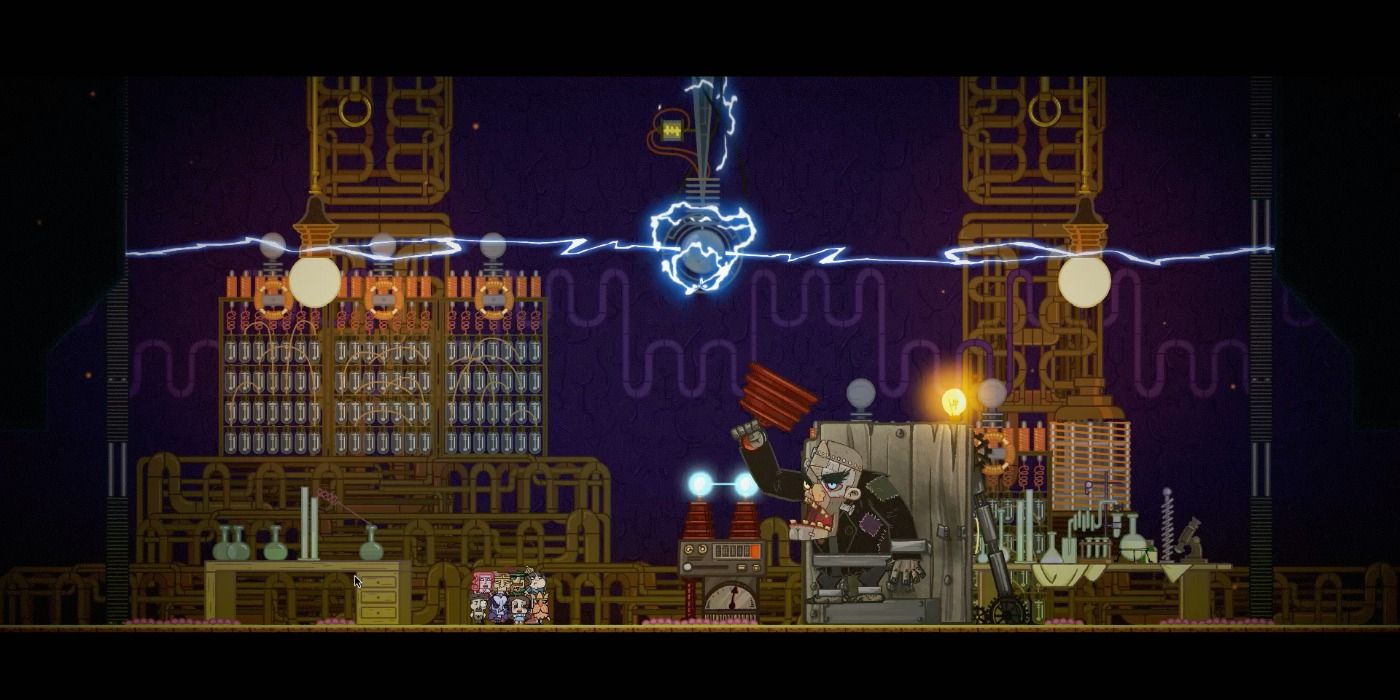 The party of adventurers in a Metroidvania is a great idea, but it’s a double-edged sword in practice. Bookbound Brigade has some tricky jumping puzzles that often involve switching the formation of the group as quickly as possible in order to bypass spikes or pits. These jumping segments can be challenging, and the game expects the player to master its mechanics, which makes it all the more thrilling when you succeed. Falling or dying will put the player back to the beginning of each puzzle, so it’s just forgiving enough to keep the challenge, without becoming too easy or too frustrating. One minor problem is that some of the special abilities required to bypass obstacles (such as the brigade using a shield to protect themselves from fire) are tied to an energy meter. The energy meter fills up way too slowly, and failing at the last hurdle during a puzzle that requires special abilities will often lead to the player needing to sit around and wait for the meter to fill up again. It’s possible to unlock abilities that speed up this process, but it still causes a lot of unnecessary waiting.

The team gameplay part of Bookbound Brigade starts to have issues when it comes to combat. The characters attack individually and it’s very difficult to properly line up hits against all but the biggest of opponents. The huge size of the party and their shared health bar means that it’s really easy to take damage and really difficult to dodge hits. These elements combined mean that the combat is chaotic in an unpredictable way, as attacking and dodging feel imprecise. The slight delay when changing formation also makes dodging even more frustrating, especially during boss battles where it’s necessary to do so.

The combat wouldn’t be so frustrating if there weren’t lots of instances of the game trapping the brigade in a room and throwing in enemies that need to be defeated. There aren’t many different varieties of enemies in the game, so these can feel like a slog to go through, especially if the player is having trouble mastering the combat mechanics of the group.

The graphics of Bookbound Brigade resemble hand-drawn illustrations and they match the light-hearted tone of the game well. The game world is huge, perhaps a little too much so, as the movement speed of the brigade is initially slow. There is a lot of backtracking in the game, including within individual areas that have puzzles involving running back and forth between switches. This issue is alleviated later in the game when the player unlocks the wheel formation, allowing the brigade to speed across flat surfaces, but even this can be cumbersome to use. The game world of Bookbound Brigade would have been improved by making the individual areas smaller or making the brigade move faster with their regular walking speed.

There are a ton of unlockable abilities for the brigade. These involve finding NPCs throughout the game world (who are also historical figures or literary creations) and helping them track down their lost items. Some of these unlockables are necessary for story progression, but there is a lot of extra content for the people willing to seek it out. There is also an experience point system that can be used to unlock additional abilities and stat boosts for each member of the brigade, so the player has a degree of customization over the abilities in their party. The completionists of the world will find a lot of content to enjoy in the world of Bookbound Brigade.

Bookbound Brigade is a fun experiment involving the use of a group of characters at once in the Metroidvania format. The ideas don’t always work well in practice, but there is still a lot of fun to be had with the game, regardless of its iffy combat. Bookbound Brigade is an interesting game that will appeal to fans who are looking for a challenging Metroidvania that tries out some new things, so long as the player is willing to endure some issues along the way.