Bright Memory: Infinite feels like an interactive cheesy sci-fi action movie, for better or worse. It boasts incredible – and wonderfully improbable – action sequences propelled by a story that barely qualifies as narrative. Infinite even has a run time that is comparable to some films. Unfortunately, Bright Memory: Infinite burns out before it fades away, peaking early and showing great promise before concluding sooner than expected.

Bright Memory doesn’t have a story as much as it has a series of events that just happen. You’re Shelia Tan, an emotionally wooden but capable soldier specializing in supernatural phenomena. A black hole appears in the sky, consuming anything within range and causing catastrophic weather. This void is somehow connected to an ancient mystery in which an ostensibly evil organization – led by the blandest villain in years – has a vested interest. Your goal is to stop these guys and figure out what the heck is happening. When you’re not tangling with high-tech soldiers, you’re battling centuries-old warriors and otherworldly demons for reasons that are not adequately explained. The plot barely tries to make sense of its events, only telling you enemies are bad and must be shot and/or stabbed in the face. Even after telling my brain that its services weren’t required for this story, I was still floored by its horribly abrupt ending. Just when it seems like the second half is kicking off, the story pulls the plug with hardly any resolution. This whiplash is jarring, and I’m still shaking my head in disbelief.

I care less about the story wrapping up quickly and more disappointed that I couldn’t play more of the game itself. Playing Bright Memory: Infinite is thrilling thanks to its silky smooth, fast-paced combination of sword and gunplay. Slicing apart foes with Shelia’s sword feels incredibly satisfying. So does a parry that deflects bullets and stuns foes, allowing you to launch and juggle them Devil May Cry-style. Even better is an upgrade that fires energy beams with each swing, essentially turning the sword into another long-range weapon. The four firearms – an assault rifle, shotgun, handgun, and sniper rifle – feel good in their own right, and each has a fun alternate firing mode, some of which are delightfully silly. I’m not sure why a sniper rifle would also fire a sticky grenade, but I loved using it to blow apart multiple targets.

Shelia’s Exo Arm offers another fun tool, letting you manipulate gravity to pull enemies toward you, then blow them apart with an EMP blast. This is great for dealing with distant threats and becomes practically broken (in a good way) once fully upgraded. Thanks to a very generous cooldown, I constantly plucked foes from the other side of the map, with little consequence at times. Odds are you’ll obtain this power and others much sooner than later. The game showers players in collectible upgrade points easily found across the linear environments. I fully upgraded half of the available abilities within the first 90 minutes. Parkour-style traversal and a grappling hook make exploration enjoyable, but the platforming challenges themselves are basic and don’t take full advantage of your maneuverability.

As entertaining as Bright Memory: Infinite is, the action peaks early. Expect to confront limited combinations of the small batch of enemy types during the roughly two-and-a-half-hour adventure (you read that right). Some battles unfold within a temple courtyard, others atop passenger airplanes careening into the black hole. No matter the ridiculous backdrop, confrontations eventually plateau since enemy encounters don’t get enough time to evolve. In turn, neither did my approach after a while, which is a shame. I loved mixing up my abilities in awesome ways but eventually settled into a familiar rhythm, though the entertaining boss fights against equally capable swordsmen or a mythical colossus provided the challenge I desired. Bright Memory: Infinite ended just as I’d gained a firm grasp on my basic capabilities; a disappointing payoff to its enjoyable learning curve.

In many ways, Bright Memory: Infinite feels like an extended tech demo. The jaw-dropping action and stellar graphics would serve as a great selling point for any new platform and almost appear too good to be true. Developer FYQD Studio proved some killer concepts but didn’t evolve them across a more complete adventure. Short games aren’t inherently bad, but Bright Memory: Infinite leaves me wanting so much more and is full of unrealized potential. 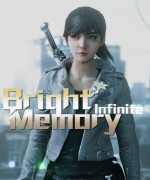 Bright Memory: Infinite boasts dazzling and entertaining combat but its full potential goes unrealized thanks to a largely flat design and an insultingly brief runtime.